I have just recently returned from the Graphene 2017 conference in Barcelona where I gave an invited talk. There is tremendous scientific progress, both on CVD and platelet type graphene, and across many graphene applications. Interestingly, the participants however repeatedly suggested that the industry has now passed the peak of hype and is well into the disillusionment period.
At IDTechEx, we have been closely following the graphene industry over the past five years. We regularly interview suppliers and users, organize the leading events on the topics, and speak at many conferences around the world.
The results of our continuous research is this report Graphene, 2D Materials and Carbon Nanotubes: Markets, Technologies and Opportunities 2017-2027 which provides you with the most comprehensive analysis of graphene technologies, applications, players whilst offering ten-year segmented market forecasts in USD and tpa.
As observed in our report, we see these developments as a natural part of the market growth for a new material, which is inevitably a slow and patient process. Here I will bring you up-to-date with our latest market analysis.

The market now accepts the diversity of graphene types and that not all graphenes are equal. This was evident from the outset but the hype and buzz prevented many from recognising this trend.
This diversity is depicted in a double-logarithmic chart below which plots the nominal morphology of graphenes offered on the market on the basis of lateral size and thickness. Clearly, these materials, all sold as graphene, occupy a large area.
This is however no surprise. In fact, it is a characteristic of the carbon additive business. It is observed even in the mature carbon black industry where numerous carbon black types exist, each commanding a different prices and catering to a different market need.
An implication of this diversity is that no 'winning' graphene material will emerge. The market will test all manners of graphenes, and the winning material will be application specific.
This demonstrates the futility of competing on the basis of quality levels at the powder level, and the necessity of proving performance and value add at, at least, the intermediary level. The industry recognizes this too, and is moving en mass downstream. 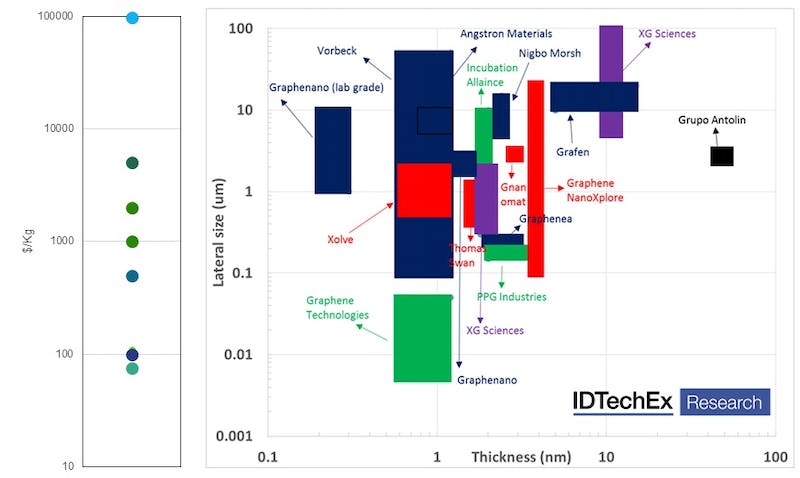 Price is a critical parameter. This is because graphene remains largely a substitute material. This is despite years of searching by graphene suppliers now, and years of searching by the CNT community before it.
The substitution go-to-market strategy imposes its own set of market dynamics. One critical intrinsic characteristic is the strong downward pressure on price established by the incumbents' reference price and performance. Graphene will not fully free itself of such downward forces even when it identifies a more-for-more application.
The graphene prices have been coming down substantially. This is evident in the pricing trend of multiple companies. Yet, the market sees a large price disparity for graphene platelets. This is shown in the left-hand-side chart above depicting that graphene nanoplatelet prices vary by orders of magnitude.
This price range will inevitably narrow as the industry transitions from sales into the R&D community into real commercial sales. It will, however, not completely disappear because graphene will remain a speciality material and because differences in graphene types will sustain differences in prices.

From pilot to volume production

The graphene industry has increased the global production capacity. This is because the industry now witnesses a strong application pipeline which sees a wave of emerging applications at the later commercial prototyping or early commercial sales levels.
It is also a natural part of the maturation process of the industry. In the early days when most companies only had piloting capability, they could only engage in projects that demonstrated performance.
This was evident in their marketing campaigns which regularly presented graphene as a fantastic material for numerous applications, and in their customer list which consisted of hundreds of researchers, in companies or academia.
The industry had to scale up in order to be able to participate in serious qualification process, particularly because most its target markets are high volume in nature.
The hype also led to over-investment in some cases. This, together with governmental budget commitments, helped reduce the cost of finance, further helping fuel the capacity expansion globally. 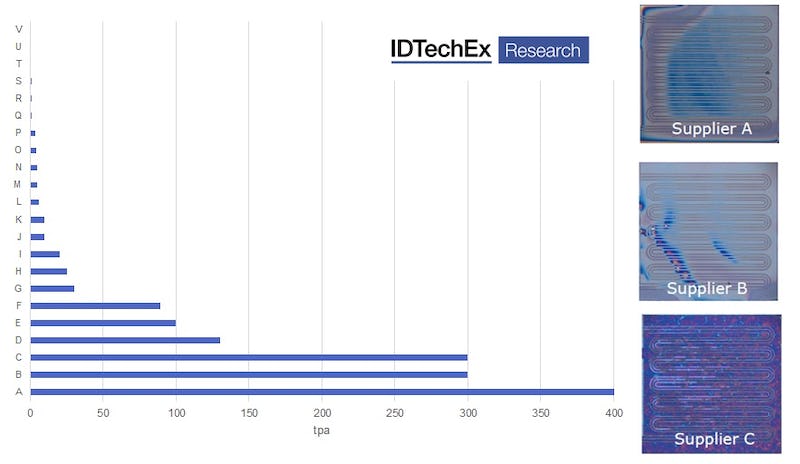 Caption: (left) production capacity by player. For more details including specific company names please refer to Graphene, 2D Materials and Carbon Nanotubes: Markets, Technologies and Opportunities 2017-2027. Source: IDTechEx Research (right): rGO suppliers byb three different suppliers. Source: Presentation by Infineon at the IDTechEx Show!
The utilisation rate is still however low, preventing suppliers from reducing cost of production. This has forced some to sell under the cost of production in order to develop business and cash flow.
The industry has however generally compromised QA processes in its rush to get the production capacity up and their materials out there. End users often complain that no two producers can supply the same material, and even the same supplier suffers from large batch-to-batch variation.
This is symptomatic of many early stage new material commercialization. In time it will be ironed out. In fact, already, some see an opportunity to differentiate on the basis of quality, particularly those with backgrounds as speciality material suppliers.
For more information about this industry refer to Graphene, 2D Materials and Carbon Nanotubes: Markets, Technologies and Opportunities 2017-2027. At IDTechEx, we can truly say that we have been a part of the industry since its inception. We have interviewed and visited the key players, organised the leading business-focused events around the world, and advised many investors and end-users. We can therefore offer unrivalled insight and intelligence into the graphene market.