Transparent conductive films and materials: past, present and future

The market for transparent conductive films and materials has been rapidly changing. This continuing transformation is taking place at all levels: technologies, applications and suppliers. In this article we provide a brief overview of the past, present and the future of this industry, tracing and forecasting the past, present and future status of various applications, technologies, and materials
This analysis is drawn from our report "Transparent Conductive Films (TCF) 2018-2028: Forecasts, Markets, Technologies". It provides granular market forecasts, in value and sqm, segmented by 20 applications and 10 technologies. It provides insights- based on primary information- on around 90 industry players. It offers detailed data-driven technology assessments and roadmaps.
The past: major technology shifts and market changes to date
Technology cycles are often short-lived in consumer electronic markets. Touch displays are also no exception. Indeed, we have witnessed many changes since 2008, the time when we started analysing this market.
Within the years that we have been covering the TCF market, we witnessed the rise of p-cap technology which essentially rendered resistive touch obsolete. In more recent years, we witnessed the rise of embedded (vs. add-on) touch technology, shifting the value from panel to displays makers and adversely affecting the addressable market for film supply. This technology shift is clearly evident in the market forecasts presented in our report.
In parallel to these technology shifts, the market composition of touch display technology also changed. Mobile phones exited the period of rapid unit sale growth whilst low-cost challenger companies appeared in emerging markets. Tablets first grew in sales but then reversed the trend, entering a period of sustained decline. Notebook sales stabilised but touch technology did not penetrate as rapidly as others had hoped, whilst All-in-Ons generally undershot original industry expectations.
Numerous non-touch markets were also in development mode. In the main however, these failed to grow out of the nascent states. The limitation was never the transparent conductor technology. Instead, these emerging technologies were often faced with a mighty incumbent and thus struggled to differentiate on performance and/or costs. Examples are OLED lighting and organic photovoltaics.
Within this time, we also witnessed the changing fortunes of various transparent conducting layer and materials technologies. ITO film was advancing rapidly on ITO glass due to thinness, robustness and lower cost until the rise of embedded touch adversely affected its addressable market size. After a decade of development, ITO alternative technologies were beginning to make notable commercial in-roads until ITO film prices were slashed to prioritize market share protection, altering the market dynamics and pushing the industry into a period of difficult consolidation. This meant little or mediocre success for alternatives. Our report provides detailed segmented market forecasts for 10 transparent conductor technologies across 20 application sectors.
The present: ITO alternatives finally begin to swing into success territory
This market is never in a stationary state. Indeed, after the setback of the consolidation period, several leading ITO alternatives are being rejuvenated. Silver nanowires are finding some opportunity in low-cost mobile phones, in transparent LED film, in large-sized p-cap displays, and in transparent heaters. Silver nanowire production is also largely shifting to China, both for new Chinese and older non-Chinese players.
Metal mesh is continuing its advance. Its etched and embossed (hybrid) types had already found commercial success particularly in tablets and even in niche applications like transparent antennas. The rise of embedded touch had however adversely affected their addressable market, pushing this technology to also seek opportunity in the ultra large sized (>>55") segment of the display markets. Here, some suppliers are levering their old plasma display lines to offer etched metal films whilst other producers (of both etched and embossed types) are grappling with a difficult decision: whether to invest in a new undepreciated large-format (width) line or not. In the meantime, directly printed metal mesh technology is also making slow but steady incremental advances. It has already demonstrated sub-5-micron linewidths and is transferred into pilot production.
Other ITO alternatives are also having to replot their paths. Carbon nanotube (or nanobuds) film suppliers now seem to realize that mainstream touch displays markets or markets requiring low resistivity are out of reach. They are hence seeking to capitalize on their differentiated attributes. In particular, they are leveraging the stretchability to develop 3D touch surfaces using in-mould electronic processes.
CVD graphene, on the other hand, is struggling to define a path out of its bleak prospects as a TCF material. It remains an over-priced and under-performing technology. The R2R growth and doping of the films have improved. However, cost effective, large-format, and high throughput R2R transfer remains elusive. The interest has certainly weakened with technology owners/developers shifting focus away from transparent conductor markets. 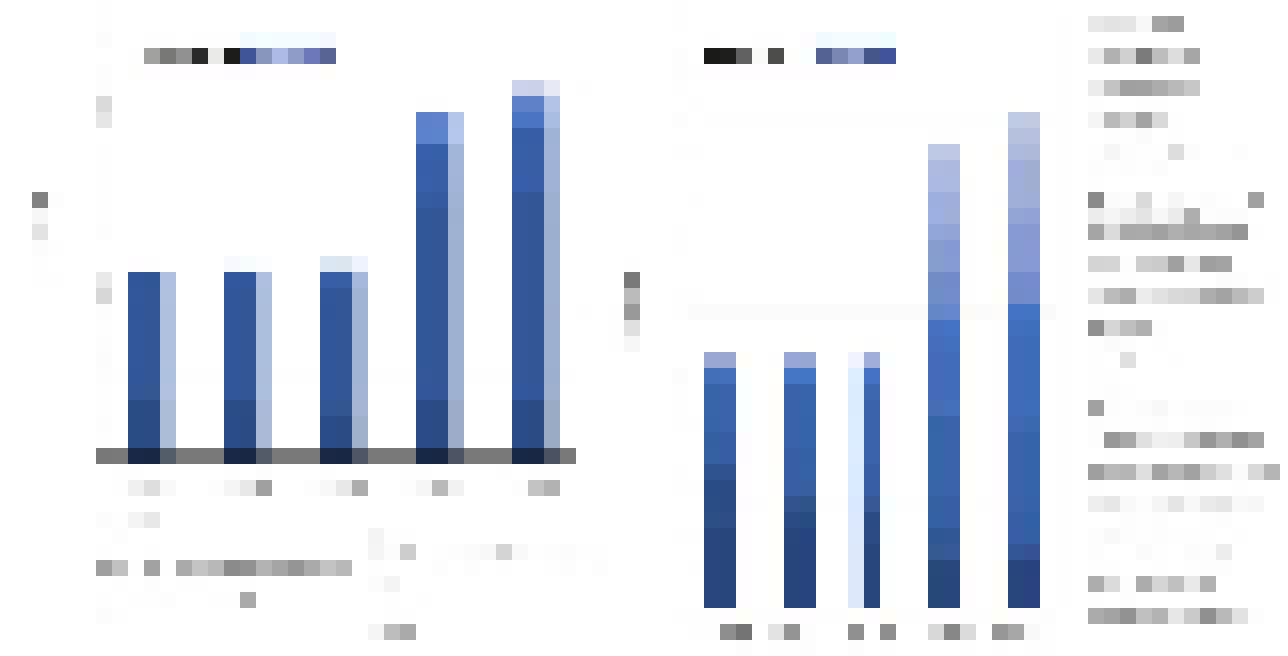 Ten-year segmented market forecasts by 10 technologies and 20 applications. The real values are masked as are the legend colours. The legend sequences have also been altered. For accurate and full results including the actual data please refer to "Transparent Conductive Films (TCF) 2018-2028: Forecasts, Markets, Technologies".
The future: new markets and continued innovation
Several applications will emerge in the future. We believe that flexible (not just plastic) OLED displays will be commercialized in the near future. This will create opportunities for flexible transparent conductor technologies. The touch sensor may initially be integrated as an add-on film but is likely to migrate into the cell layer potentially directly on the thin film encapsulation barriers.
The p-cap technology will make its mark on large-sized (>>55") display technology, creating a notable market thanks to large unit size despite the comparatively low volumes. Touch technology on standalone monitors will also finally take off in line with changes in personal computing technology. Transparent heating applications, particularly in the automotive industry as window or mirror defrosters, will gain further acceptance. In-mould devices will also find success in both automotive and customer electronic applications.
Silver nanowire technology will continue its material innovation/improvements. It took the suppliers too long to effectively address the reliability (e.g., silver migration) issues, costing the technology dearly in reputation and setting back its commercialization. This issue is however largely addressed. The continuing focus will be on improving the resistance-haze trade-off whilst enabling the material/process ecosystem for effective photopatterning and etching of films (vs current laser patterning). The latter is key if silver nanowires wants to penetrate high volume flexible displays or even replace ITO in some embedded designs.
The metal mesh technology will also not stand still. Direct printing will remain on its path of steady incremental improvements. The linewidths will get narrowed, the printing speeds higher, and the web widths wider. Technology will progress from pilot to higher volume production. Producers of large-format etched metal mesh will remain focus on large-sized displays, but we speculate that some prominent names will leave the business. In parallel, not all current producers of small to medium format etched or embossed metal mesh will transition to large format. The uncertainty around addressable market size, and the question marks over cost competitiveness in the absence of undepreciated legacy equipment, will put them off.
All in all, as forecast in our report, we envisage that the total market for transparent conducting layer (glass and film) will double by 2028 compared to its 2017 value (in the considered applications). The short-term prospect however is stagnation. There will be some growth in use cases, but this will be offset by price squeezes. In the medium- to long-term, growth will be fuelled by the emergence of new and/or larger area applications.
The technology composition will also change. The forecasts in our report suggest that ITO films will decline in the short term but will then stabilize in the long term. Silver nanowires have entered the growth phase and will rapidly grow, becoming a market in 2028 comparable to ITO film then. The metal mesh will have mediocre growth in the medium-term, but long-term aggregate prospects are stronger for new applications particularly if direct printing becomes cost competitive and mature to overcome this technology's new CapEx issue. Graphene, CNT and PEDOT will remain locked out of mainstream markets but some (not all) will carve success in niche applications based on their special attributes.
For further and more detailed analysis please refer to our updated report "Transparent Conductive Films (TCF) 2018-2028: Forecasts, Markets, Technologies". This report is based on years of research, countless interviews and discussions, numerous annual tradeshows visits globally, and multiple consulting projects. It provides granular market forecasts, in value and sqm, segmented by 20 applications and 10 technologies. It provides insights- based on primary information- on around 90 industry players. It offers detailed data-driven technology assessments and roadmaps.
See more at www.IDTechEx.com/tcf