RFID - a surge in orders

As forecasted by IDTechEx , there has been a surge in orders for RFID in 2009. Despite the world's largest RFID project, the $6 billion China National ID card scheme, being completed a year earlier, the global RFID market is rising 5% this year to $5.56 billion, in the face of the global financial meltdown which has caused some car production, for example, to plummet by 50%. In many applicational sectors, RFID orders are up 10%.
Most of the action has been in the USA, where the largest orders continue to be placed, in the UK, China and Japan. CSC and IBM have landed an order for $570 million to upgrade the UK e-passport applications and enrolment system. Unisys was one of four companies selected by the US Army Program Executive Office-Enterprise Information Systems for a contract for the Radio Frequency Identification III (RFID III) program. This contract has a total ceiling value of $428 million. Currently, RFID tags are attached to approximately 125,000 shipments of US military supplies each week. Transcore landed $63 million for RFID based non-stop tolling in Florida. In addition, the USA has seen many multimillion dollar RFID orders placed recently, one example being a $2 million order on Awarepoint to provide a Real Time Locating System for Jackson Health System, continuously tracking 12,000 key assets. For most of these suppliers, the new orders are their largest orders ever.
IDTechEx has had two members of staff touring Japan and China and they report something very different out there. This year, the Chinese are putting RFID where it is not encountered in the West such as in cheques and on fast fishing boats to prevent collisions. However, China is also making the world's largest investment in installing RFID throughout its factories and supply chain in order to underpin the nation's pre-eminence in manufacturing. An order for $8 million of RFID enabled casino chips has been placed by establishments in Macao and the Philippines. Hong Kong is particularly active in RFID. Japan continues to buy over 90% of the world's RFID enabled mobile phones. They can be used to buy access to public transport as well as goods in many retail shops.
The most active applicational sectors for RFID as revealed by the number of projects in the IDTechEx RFID Knowledgebase. 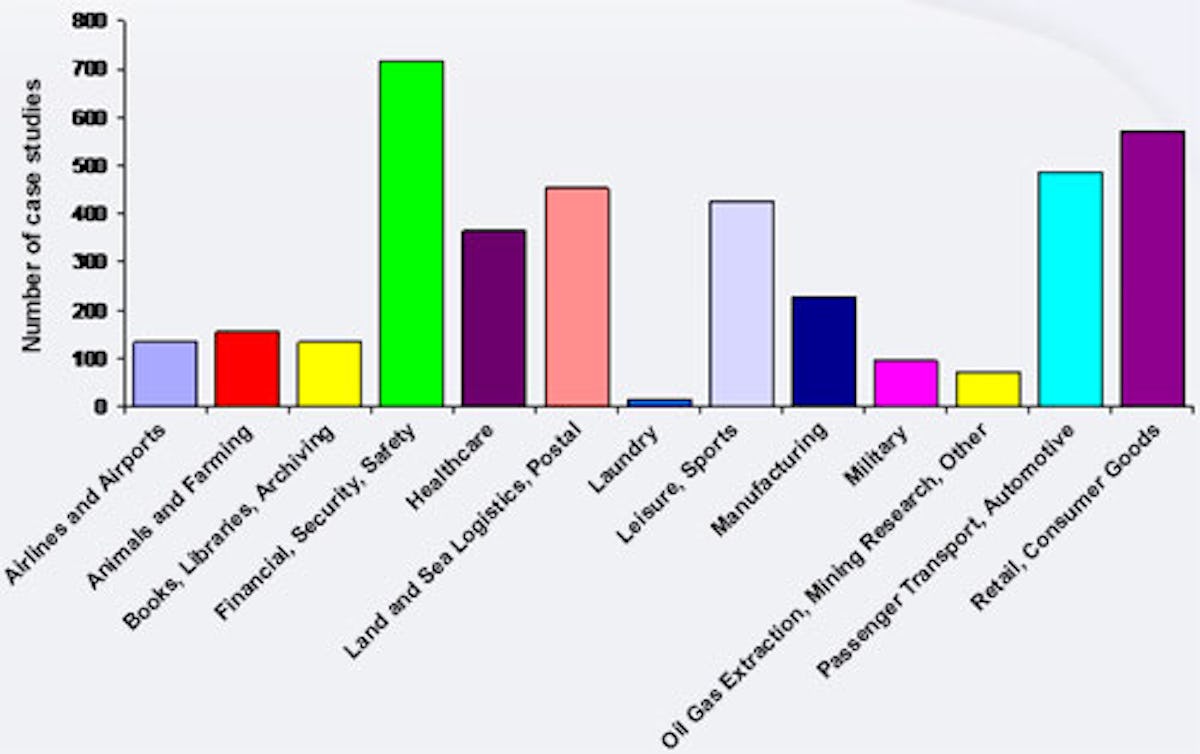 Source: IDTechEx RFID Knowledgebase
However, there is increased activity elsewhere as well, including Gemalto servicing an order for 900,000 RFID National ID cards for Lithuania, probably valued at more than $6 million. Axcess clocked $3.5 million for a port security infrastructure RFID system in Trinidad. Moscow Metro has ordered about $10 million of RFID tickets. RFID is certainly more widespread, with the IDTechEx RFID Knowledgebase tracking what are now 3800 projects in 110 countries. In China, the number of RFID projects tracked has more than doubled to 281 in only two years.
On the technology front, Wireless Sensor Networks - so-called Third Generation Active RFID - are being newly offered by a large number of companies. They have taken many fairly modest sized orders initially but enough to make the market for WSN overtake the market for RTLS - Second Generation RFID -though the two do not yet compete with each other. RTLS first took off one year earlier when over 100 US hospitals adopted it.
All these powerful forces, and other emerging markets such as the postal sector, will be analysed in the conference and exhibition RFID Europe in Cambridge UK 29-30 September .