The Global RFID Industry According to IDTechEx: An $11 Billion Market

IDTechEx Research has just released its latest RFID report titled RFID Forecasts, Players and Opportunities 2018-2028 which provides one of the most thorough and comprehensive industry assessments yet.
Based over 18 years of experience assessing the RFID market, and with direct input from vendors across the supply chain, the report provides detailed historic sales going back to 2005 to forecasts through to 2028, segmented by application for each key frequency for passive RFID in addition to assessing the RFID reader and active RFID market size.
2018 RFID Market Status
In total, IDTechEx Research finds that the RFID industry will be a business worth $11 Billion in 2018. Of that, passive RFID tags make up $5.01 Billion and RFID readers $2.85 Billion.
The numbers of units sold and their average sales price (ASP) vary across the range of choices. In 2018, IDTechEx expect that 11.5 billion RAIN RFID labels (RFID operating at ~900MHz) will be sold, versus 4.0 billion HF devices (RFID operating at 13.56MHz). The sales of ICs are higher in the year since it takes time to convert ICs to tags and we account for stockpiling.
The near-term forecast from IDTechEx Research is shown below, with consistent growth in tag numbers, offset slightly by reducing tag ASP.
Total RFID Market in US$ billions 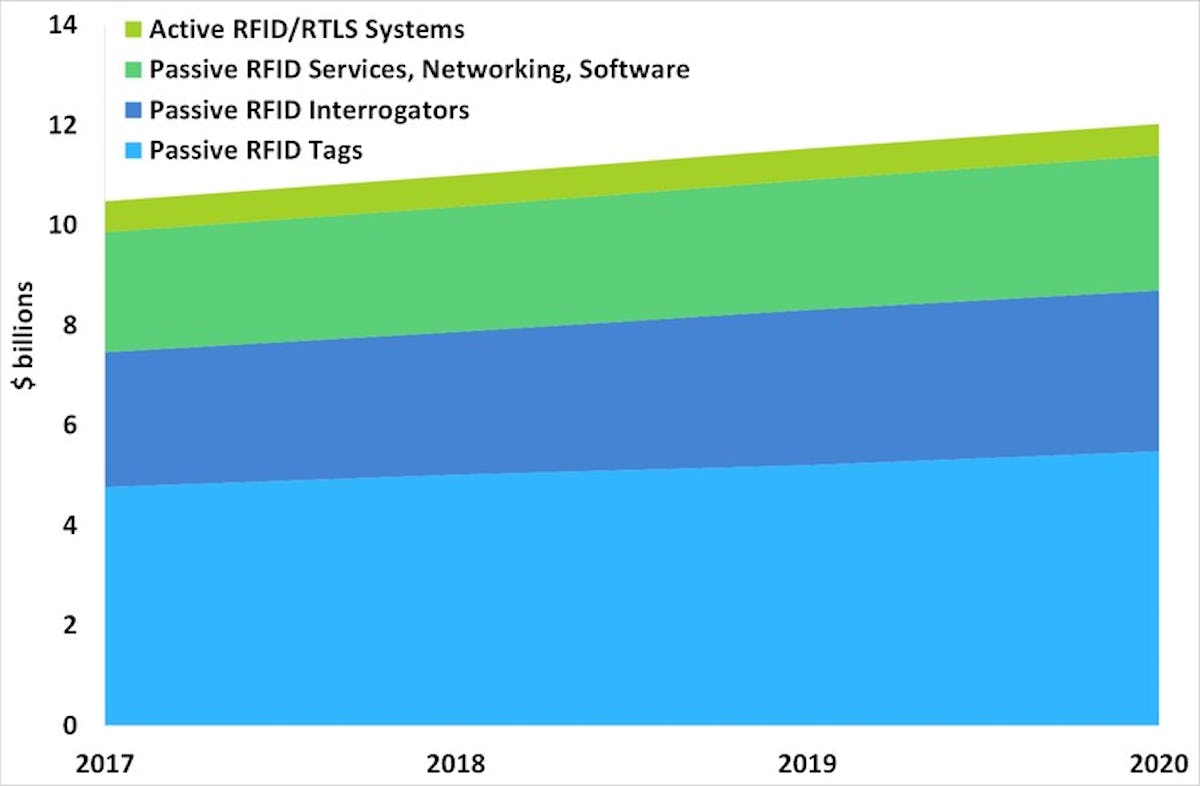 Source: IDTechEx Research https://www.idtechex.com/rfid
RAIN RFID: The Highlights
In 2018 use of RAIN RFID on apparel will reach about 10% of the total addressable market (TAM) of tagging retail apparel - estimated to be 80 billion units per year. By 2023 IDTechEx forecast the number of tagged apparel items will grow to 21 billion units.
Particularly strong growth is expected for tagging airline baggage. This year the key body, IATA, announced that they are developing an RFID standard for baggage tagging with the aim of airlines rolling out RFID in 2020. Delta Airlines is already an early mover. The market has a TAM of 3.6 billion tags a year.
RAIN RFID is deployed across many industries in small volumes for each project but globally these add up to increasingly significant volume - IDTechEx find 2 billion RAIN RFID tags will be used for asset tracking in 2018 alone across many industries.
The future looks bright too in the medium term. A Japanese Government ministry has set the goal of tagging 100 billion retail items in 2025. However, that is based on a 1 yen (less than 1 US cent) tag being available by 2025 which is too optimistic. The tag price teardowns in the report cover the latest tag component costs for both RAIN and HF RFID.
HF/NFC RFID: The Highlights
HF RFID is established for payments, secure access and transit applications. The tag ASP is much higher than RAIN RFID due to the security required in those applications. In 2018 2.15 Billion contactless cards will be sold, with growth coming from contactless payment cards in addition to contactless transit cards.
The second largest market for HF tags by value will be those tags used in passports - a market of $442 million for the tags alone in 2018.
HF/NFC applications beyond payments grows to several hundred million labels in 2018 but most are still relatively low volume deployments across many projects, price being an issue on the highest volume opportunity - the so far elusive smart packaging, despite a huge NFC reader network in the form of smart phones. IDTechEx Research finds that no NFC provider has yet to demonstrate strong enough payback or value for mass deployment of NFC on packaging (over 1 billion units/year) at current NFC label prices. New technologies, such as flexible integrated circuits, may help to drive the price down in the longer term.
Active RFID in Flux
IDTechEx Research also finds that the active RFID sector is in a great deal of flux with many new technology choices. The historic volume application - active RFID use by the military - has reduced to many small yet profitable uses of active RFID in manufacturing and asset monitoring. The costly and problematic issues of active RFID reader infrastructure has given way to new choices: low power, wide area networks (LPWAN) which can stretch over kilometres. Of several options available, some that are based on cellular networks have been wrapped up into the 5G standards. Governments around the world are backing different LPWAN solutions, with the Chinese government targeting 150 million such 'connections' by the end of 2018. The business model changes from selling tags to selling asset location as a subscription service.
Competitive Threats
Some emerging technologies have the potential to impact the RFID market growth, which is taken into account in the forecasts. For example, machine vision has improved to the point where several companies can use inexpensive cameras to identify things at a reasonable distance. The hardware and software technology development is funded by other industries, such as autonomous vehicle sensors to cameras in consumer phones, creating scale for such technologies that those in item identification can potentially reap. Then there is the ongoing march with Bluetooth Low Energy and its huge reader network. The IDTechEx report assess these and other emerging technologies.
THE report for those in, or seeking to get involved in, the RFID industry
RFID Forecasts, Players and Opportunities 2018-2028 provides an immense range of data on the RFID industry - historic, current and forecast. This is provided based on global analysis. For full details see www.idtechex.com/rfid.

Top Technology Trends 2021 - with IDTechEx Insights
Upcoming Webinar - The Development of 5g in 2021 and Its Prospects
Will Huawei Survive? A Comprehensive Analysis from IDTechEx
Join the Upcoming IDTechEx Webinar on 5G