Many new electric vehicles were on display at the IDTechEx Show! on November 14-15 in Santa Clara, but that was the tip of the iceberg. The event had a hidden message; the future enabling technologies for electric vehicles (EVs) from buses to cars to mining vehicles. With its origins in being the world's largest printed electronics event, it has seamlessly extended to similar technology in sensors, 3D printed electronics and one of this year's buzzy topics - In-Mold Electronics (IME) - based on screen printing of stretchable conducting patterns for actuators, lighting, sensing and more connected to embedded LED and IC chips. All this is vital to the future e-aircraft, e-boats and more.
Raghu Das, CEO of analyst firm IDTechEx that stages the yearly event said, "As we continue to rapidly grow the event we shall make it more obvious that your customer and your customers' customers are present. In 2019, we shall have an electric vehicle area in the exhibition. It will major on the new enabling electric vehicle technologies that our current exhibitors have in spades, in addition to adding many more."

IDTechEx has over 20 new reports on electric vehicles and their technologies and it is currently carrying out consultancy for EV leaders, as well as providing detailed global information through its EV subscription platform. Exhibitors such as ABeetle Taiwan, DuPont USA and TactoTek Finland demonstrated the virtuosity of replacing 50-100 optical, sensing and actuating components with one in-mold smart material for an overhead control and lighting cluster or dashboard for example. Vital to electric vehicles, this increases reliability and life tenfold, reduces weight and volume up to 90% and makes things work better. An antenna in the surface of a molding performs best, for example. IME is a no-brainer. In prospect is lower up front cost and cost of ownership and vitally "fit-and-forget". 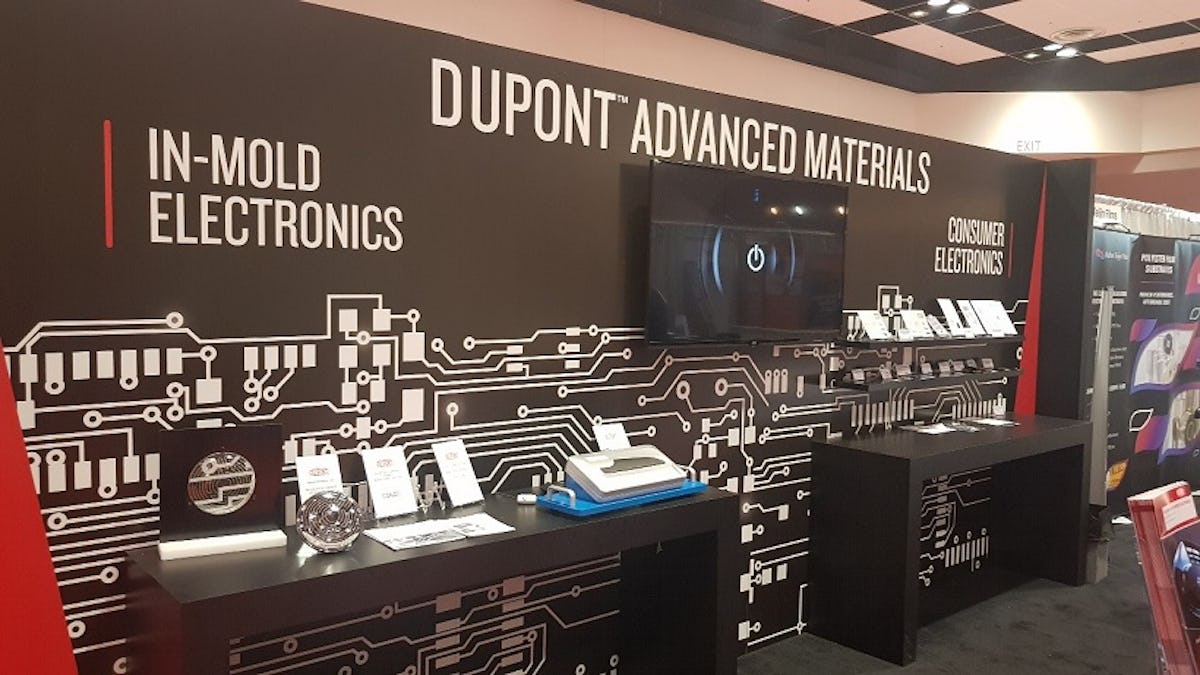 Exhibitor DuPont Highlighting In-Mold Electronics at the IDTechEx Show!
ABeetle even demonstrated In-mold Electronics going into the mobility vehicles for the disabled, e-scooters and e-bikes made in Taiwan in large numbers. For TactoTek success is imminent in premium electric cars in Europe. Little wonder that top executives from GM, Volvo, Ford and their Tier One suppliers such as Denso and GE were eagerly striding the floor. IDTechEx recorded deep video interviews with Workhorse, which makes electric drones and trucks, with Ford and with speaker BYD China in electric forklifts, cars, buses and trucks and with others.
Such structural electronics extends beyond load bearing components and trim not being dumb any more to solar and energy storage bodywork, sometimes using conformal film. Exhibitor Alta Devices showed the best performing conformal photovoltaics that will appear all over its parent Hanergy's electric cars in 2020. Hanergy China has a roadmap to produce 1kW/kg affordably on Energy Independent Electric Vehicles (EIEV) that never plug in. Party trick? Not at all. In that very month Hyundai and Kia announced they were getting into solar bodywork following Tesla and Toyota expressing intentions and Bollore and Audi licensing the Hanergy process for cars.

There was detail too. Silent Sensors exhibited piezoelectric tyre pressure monitoring that powers itself from vibration. Among the four exhibitors of printed and other piezoelectrics, Holst Centre in the Netherlands showed self-powered wide area pressure sensors. In energy storage, Zap-Go revealed its laminar supercapacitors to go in bodywork. 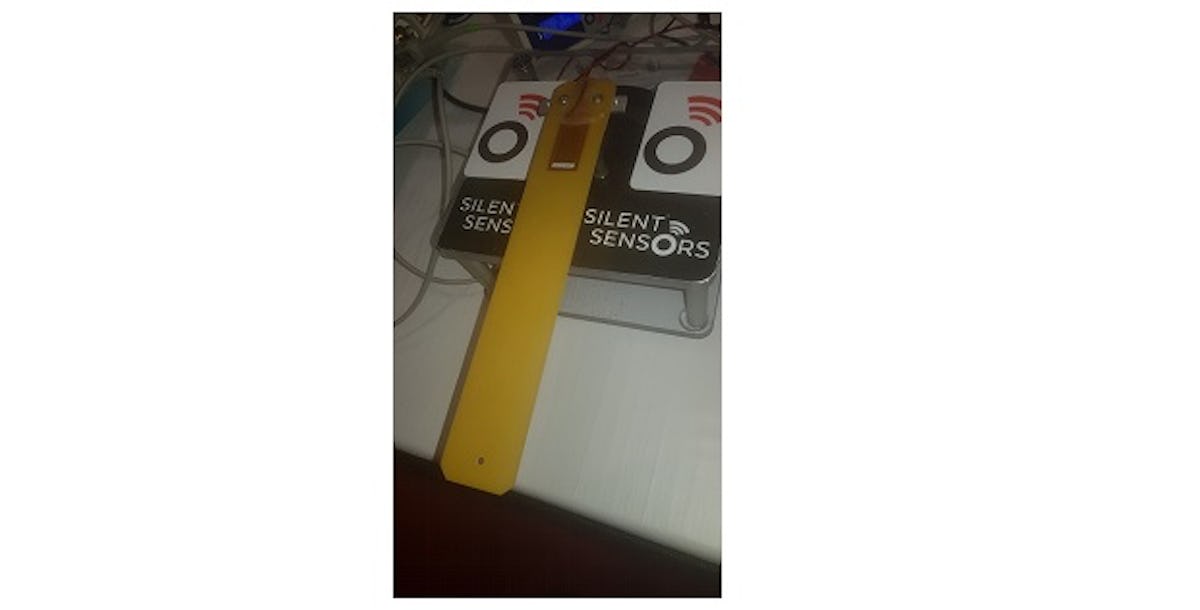 Exhibitor Silent Sensors Highlighting piezoelectric energy harvesting for tyre pressure monitoring at the IDTechEx Show!
Delegates could follow the complete chain from carbon nanotube and graphene exhibitors to their inks and the breakthroughs imminent from using them in supercapacitors, sensors and more to create the electric vehicle of the future. Those were among themes of the eight parallel conferences, the exhibition presentations and the masterclasses. 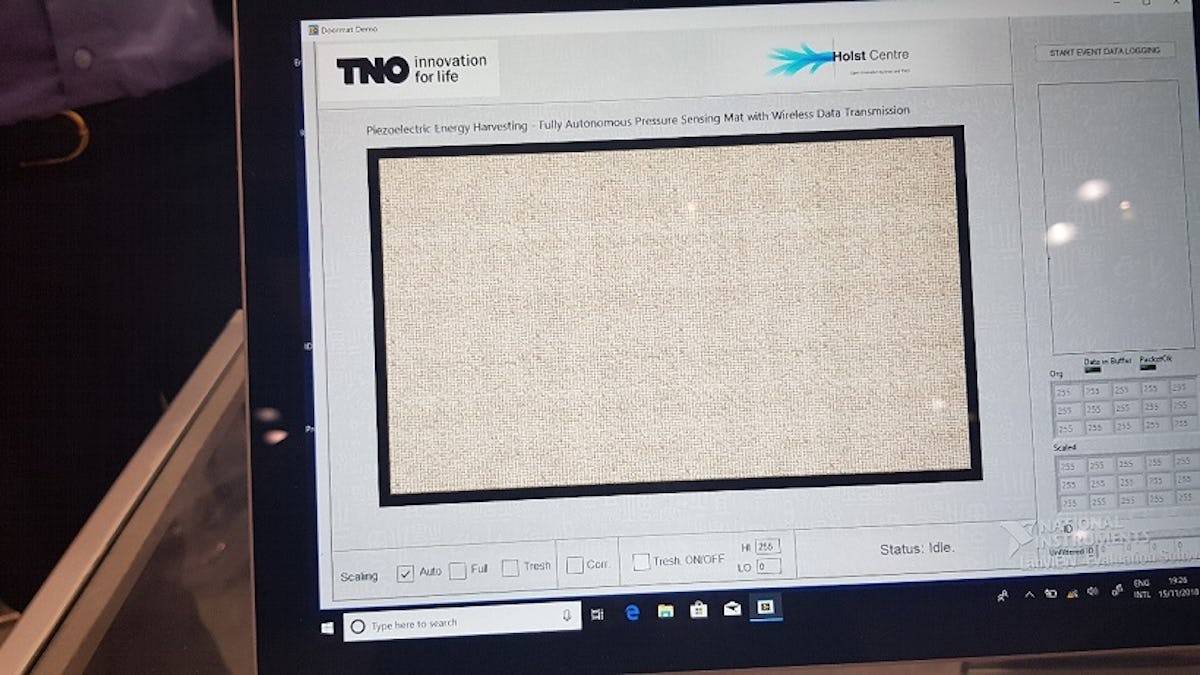 The only in-depth coverage

The day before and the day after the event, IDTechEx staged 25 optional masterclasses and the ones on all forms of electric vehicle, electric vehicle materials, smart materials for structural electronics and for the various emerging forms of vehicle and other battery technologies were particularly well attended as were those on the applications of the reinvented components - including haptics, actuators, IOT, RFID and textile electronics - in electric vehicles and elsewhere. In the audiences were big users such as FedEx learning latest advances from Deutsche Post DHL and how the solar and other structural electronics in Boeing, Airbus and Chinese giant drones will keep them aloft for years. Exhibitor PPG Industries had flexible ferrites needed for charging cars at speed on the solar roads discussed. The huge number of coating companies and others present revealed new support for the trillion dollar electric vehicle market coming soon.
The next IDTechEx Show! in Europe will be held in Berlin in Germany, on 10 & 11 April 2019 (www.IDTechEx.com/europe), with the next US IDTechEx Show! at the Santa Clara Convention Center in California on November 20-21. For more details see www.IDTechEx.com/usa.