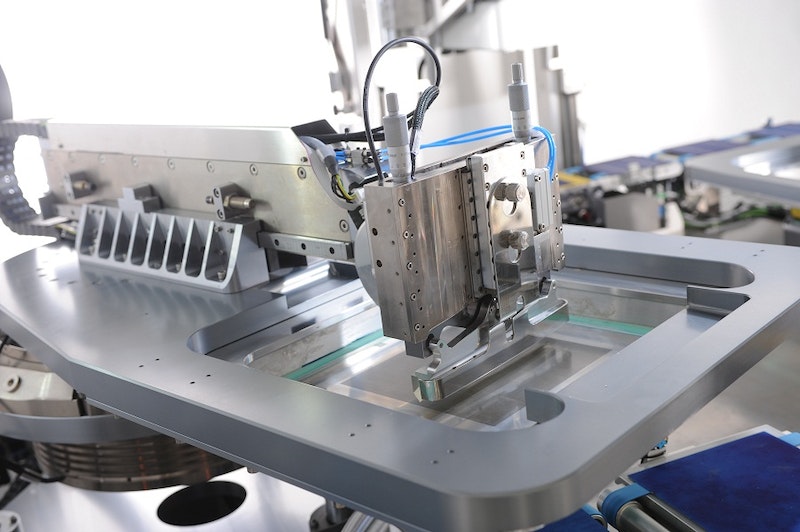 Screen Printing is one of the more established technologies utilised in the manufacture of what a lot would consider "conventional" electronics. And although they represent a hybrid state between fully printable electronics and electronics processed in silicon fabs, they also represent the intermediate step that leads to more accurate, fully automated atmospheric processing at very high volumes, with equally high yields.

A good example of this is the Applied Materials Baccini Pegaso screen printing system, an elegant solution for the deposition of conductive traces on silicon wafer based photovoltaic cells.
Solar wafers pass through the system and have metal contacts deposited, transforming them into solar cells ready for packaging into panels and installed.
The new line covers the equipment for screen printing conductive metal lines (commonly silver) to transport electrons out of the cells, a dryer, defect inspection, as well as testing and sorting of the silicon solar cells.
The main innovation of the Pegaso system is its dual tracks, allowing for two lines of wafers to move through the screen printer. In that way, downtime can be minimizes as it is possible for one of the two lines to keep on operating while the other is down for maintenance (e.g. while changing screens). The Pegaso line also claims a lower breakage rate of 0.15% with alignment accuracy down to 8 microns.
One Pegaso system can print, test and sort over 20 million cells a year, which is the equivalent of a finished solar cell every 1.5 seconds. Precsion printing of metal contacts is important in order to keep efficiency of the solar cell as high as possible, making sure they don't cover up the active cell surface: its exposure to the sun must be maximized in order to achieve optimum electricity generation.

The solar industry's move towards manufacturing methods that allow for higher efficiencies has lead to the development of processes such as selective emitter formation.
One of the main sources of potential loss in the case of solar cells industrially manufactured on the basis of crystalline silicon is due to the high rate of phosphor doping on the sun-facing side, the emitter. It is thus necessary to create a selective emitter structure in which the recombination currents could be significantly lowered and the efficiency of the solar cells greatly increased. In the case of screen printing, different layers of material would have to be deposited and in order for this to be achieved without the need for several screen printers, the capability of a printer to deposit multiple layers is paramount, which is an advantage of the separate dual lines of the Pegaso system.
The SCHMID Group on the other hand, who have made a name for themselves as a technology leader in the photovoltaic, printed circuit board and flat panel display sectors, approach selective emitters formation via the inkjet printing route. With this technology it is now possible to produce a selective emitter using a simple printing method on an Inkjet printer and a subsequent simple etching technique without the wafers being subjected to increased thermal strain as is the case in some of the other manufacturing techniques. Trials carried out, together with additional tests and reports published by the University of Constance, prove that the efficiency of multi-crystalline wafers has been increased by 0.4 % and that of mono-crystalline wafers by 0.8 %.
During IDTechEx's Printed Electronics USA conference and tradeshow in Santa Clara, California, attendees will have the opportunity to tour the facilities of Applied Materials, giving attendees insight in the company's inner workings. For more information about the event, please visit www.idtechex.com/peUSA or contact Mrs Chris Clare at c.clare@idtechex.com.
Image: Applied Baccini Pegaso printer, Source: Applied Materials
For more attend: Printed Electronics USA 2011.