Write with a pencil and you produce some graphene with the pencil lead. However, graphene has only been purified and characterized recently. This hexagonal form of carbon can be only one atom thick - the thinnest of all possible engineering materials - yet graphene layers form a remarkably tough "paper" that is amenable to traditional semiconductor processing unlike carbon nanotubes. Graphene is very tough and has the highest charge carrier mobility, obeying the laws of relativistic quantum mechanics rather than regular quantum mechanics.
Researchers at the Georgia Institute of Technology and the Centre National de la Recherche Scientifique (CNRS) in France have reported measuring electron transport properties in graphene that are comparable those seen in carbon nanotubes. Indeed, graphene mobilities of 25 thousand to 2.5 million cm 2/vs have been reported recently by the University of Maryland, the University of California at Berkeley, Georgia Institute of Technology and others, some claiming that this conduction of electricity is faster than that in any other substance.
"We have shown that we can make the graphene material, that we can pattern it, and that its transport properties are very good," said Professor Walt de Heer in Georgia Tech's School of Physics. "The material has high electron mobility, which means electrons can move through it without much scattering or resistance. It is also coherent, which means electrons move through the graphene much like light travels through waveguides." The research, begun by de Heer's team in 2001, is supported by the U.S. National Science Foundation and the Intel Corporation. In the picture below, he holds a proof-of-principle device constructed of graphene. It shows graphene patterning. 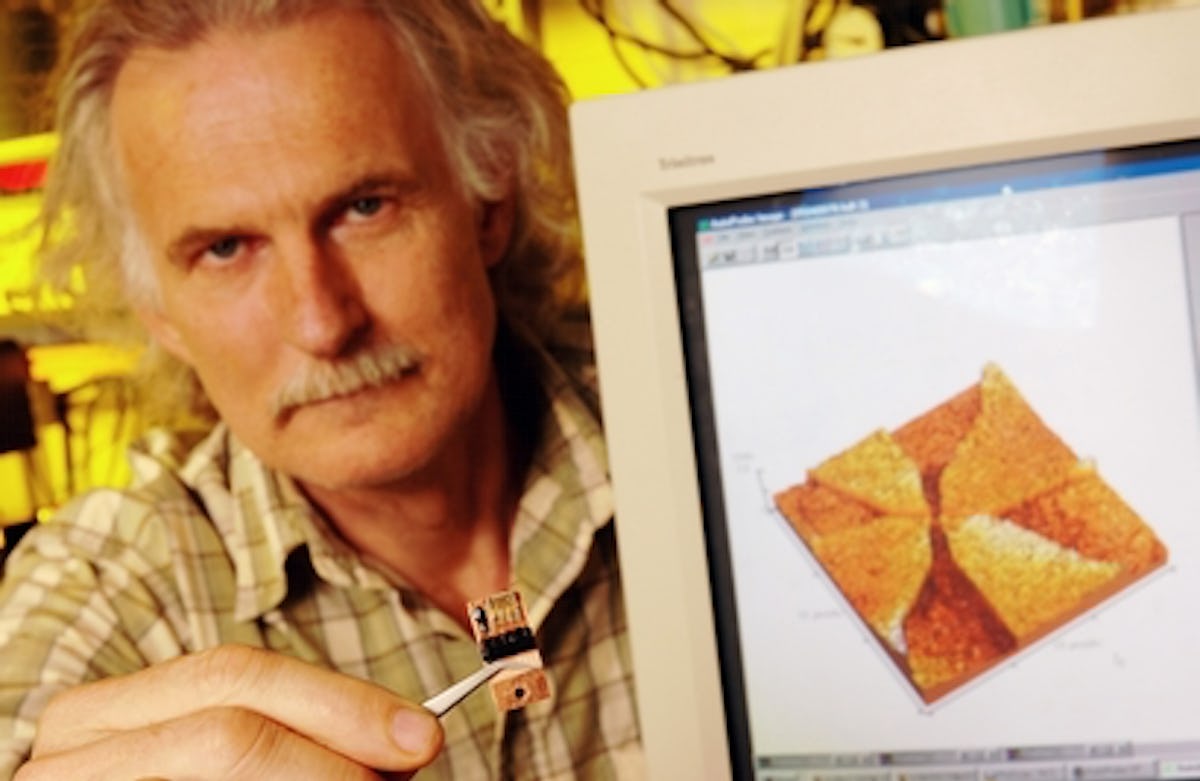 Source: Georgia Tech Photo: Gary Meek
"This is really the first step in a very long path," he says. "We are at the proof-of principle stage, comparable to where transistors were in the late 1940s. We have a lot to do, but I believe this technology will advance rapidly."

Professor Andre Geim and Philip Kim are condensed matter physicists also working on graphene at The University of Manchester in the UK. When individual sheets of graphene were not known to exist three years ago, Geim used adhesive tape to get a few flakes of graphene from a graphite crystal. "Graphene is the toughest material in the world - tougher than diamond," Geim says.

Researchers at Northwestern University created a strong, flexible, and lightweight paperlike material in mid 2007. It could be used as electrolytes or hydrogen storage materials in fuel cells, electrodes in supercapacitors and batteries, and super-thin chemical filters. They say it could also be mixed with polymers or metals to make materials for use in aircraft fuselages, cars, and buildings. Professor Rodney Ruoff of Northwestern is the nanoengineering professor leading its graphene work. He says his methods behind making novel graphene paper could lead to even stronger versions. In the initial versions, water molecules hold together the individual 10-nanometer thick graphene flakes to create the micrometers thick graphene paper. By using other chemicals as glues, the researchers envision making strong paperlike materials with various properties. "The future is particularly bright because the system is very flexible ... The chemistry is almost infinite," Ruoff says.

Some researchers envisage ultra high speed transistors being the outcome, one possibility being so called ballistic transistors which respond unusually rapidly. Because the properties of graphene can be tuned by applying electric fields, so-called spin valve transistors are also envisioned. So are single electron transistors. Transistors less than 10 nanometers across and perhaps as small as a benzene ring may be possible without the atomic migration in the smallest silicon transistors that limits their life and is said to spell the end of Mooore's law. See our article Silicon Chips in Trouble.

Graphene has an interesting tradeoff of conduction and transparency. Some researchers talk of such coatings on liquid crystal displays and photovoltaics.

However, it may all be ten years away, say the researchers, noting that a micromechanically cleaved graphene crystallite can cost $1000 today in purified form - the carbon nanotube problem all over again. However, the chemists and physicists are hard at work developing production processes for graphene. Who knows, one day someone may even print the stuff.
For more on Printed Electronics attend Printed Electronics Europe 2008.