Windows may soon have a dual purpose by not only allowing light into a room but also harnessing the sun's energy to efficiently power buildings they are part of.
The work, to be reported in the July 11 issue of Science, involves the creation of a novel "solar concentrator" developed by MIT engineers. "Light is collected over a large area like a window and gathered, or concentrated, at the edges," explains Marc A. Baldo, leader of the work and the Esther and Harold E. Edgerton Career Development Associate Professor of Electrical Engineering.
As a result, rather than covering a roof with expensive solar cells (the semiconductor devices that transform sunlight into electricity), the cells only need to be around the edges of a flat glass panel. In addition, the focused light increases the electrical power obtained from each solar cell "by a factor of over 40," Baldo says.
Solar concentrators in use today "track the sun to generate high optical intensities, often by using large mobile mirrors that are expensive to deploy and maintain," Baldo and colleagues write in Science.
Further, "solar cells at the focal point of the mirrors must be cooled, and the entire assembly wastes space around the perimeter to avoid shadowing neighboring concentrators."
The MIT solar concentrator is based on a concept called the luminescent solar concentrator (LSC) from the 1970's that was largely abandoned because the collected light was absorbed before it reached the edges of the glass or plastic plates, and the dyes were unstable.
Their version of this device consists of a piece of transparent glass or plastic plate with a thin film of dye molecules deposited on the face and inorganic solar cells attached to the edges. Light is absorbed by the dye coating and reemitted into the glass or plastic for collection by the solar cells.
When testing their device they found it was stable (to 92 percent of initial performance) for three months which is not good enough yet for many products but the team feel certain that the technology developed for OLED's in televisions will be portable to this application. 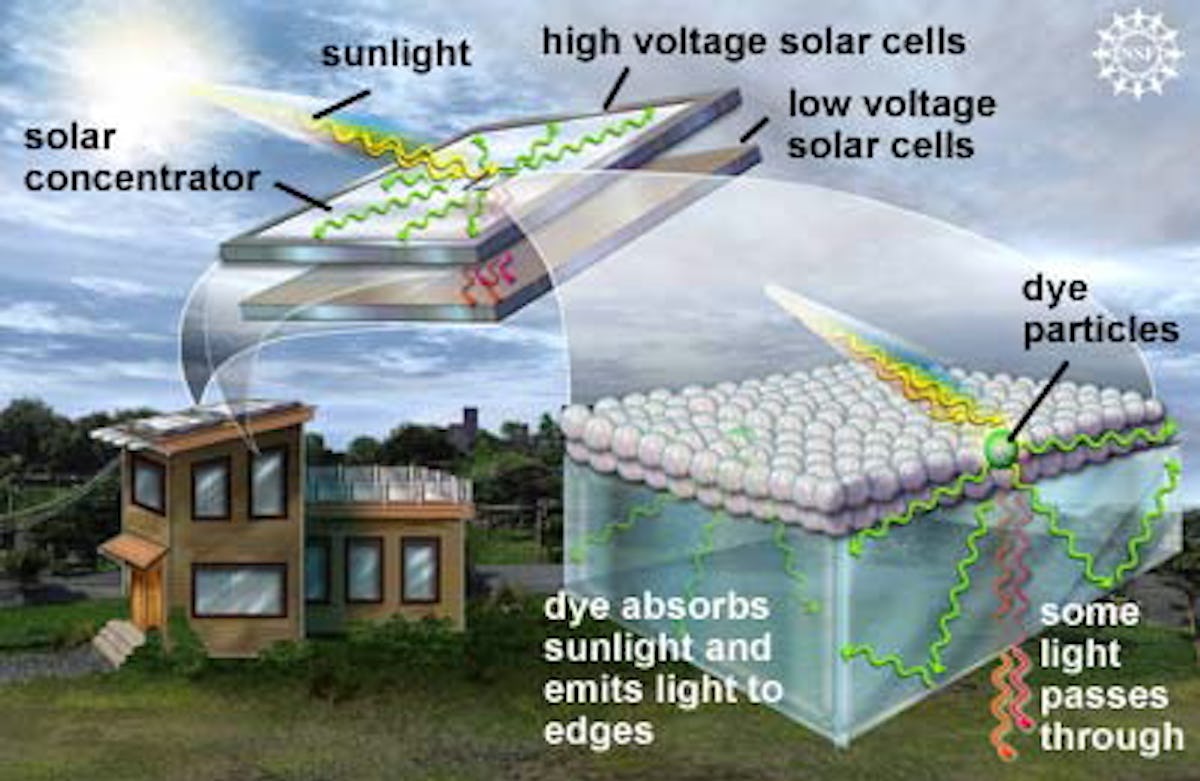 An artist's representation shows how a cost effective solar concentrator could help make existing solar panels more efficient. The dye-based organic solar concentrator functions without the use of tracking or cooling systems, greatly reducing the overall cost compared to other concentrator technologies. Dye molecules coated on glass absorb sunlight, and re-emit it at a different wavelength. The light is trapped and transported within the glass until it is captured by solar cells at the edge. Some light passes through the concentrator and can be absorbed by lower voltage solar cells underneath. Alternatively, the partially transmissive concentrator can function as a window. Graphic not to scale. Image courtesy: NSF.
The technology is being developed for commercialization by Covalent Solar, a spin off of MIT by three of its inventors: Michael Currie, Jon Mapel, and Shalom Goffri. The team believes that it could be implemented within three years - even added onto existing solar-panel systems to increase their efficiency by 50 percent for minimal additional cost substantially reducing the cost of solar electricity.
Top image: Organic solar concentrators collect and focus different colors of sunlight. Solar cells can be attached to the edges of the plates. By collecting light over their full surface and concentrating it at their edges, these devices reduce the required area of solar cells and consequently, the cost of solar power. Stacking multiple concentrators allows the optimization of solar cells at each wavelength, increasing the overall power output. Photo: Donna Coveney.
Reference: MIT News Office
For more attend Printed Electronics World USA 2008.