IDTechEx attended the SEMICON West event in San Francisco in mid July, an event with over one thousand exhibitors covering the silicon supply chain. This year, for the first time, InterSolar was co-located with the event, which focuses on photovoltaic technologies.
Eric Wesoff, a senior analyst at Greentech Media, estimated the market size of photovoltaics to be about $20 Billion this year, growing by 30 to 40% each year. He commented that investment is rife within PV - in the first quarter of 2008, 15 deals were made with a total of $671 Million invested. In the second quarter of 2008, 23 deals have been made.
In 2007 VC investments into PV totalled about $1 Billion. By July 2008, investments have totalled the same amount this year. Of the different types of PV being installed this year, Wesoff estimated that just over 90% is conventional silicon, with the rest being a-Si and CdTe, with CI(G)S being less than 1% of the market. Not unsurprisingly at a silicon focussed event, the panel discussing the future of photovoltaics were largely negative of emerging lower efficiency PV technologies such as CI(G)S and organic PV, citing that manufacture issues will delay their commericialization for the former and that companies working on the latter still have yet to sell anything or even demonstrate appropriate life times. Wesoff felt there would be a shakeout of these technologies.
There was unanimous agreement that the cost of thin film silicon PV technologies today will reach grid parity ($1/Watt) in five years at the very latest, and most likely in 2-3 years. The cost of PV 3 years ago was about $7/Watt, today it is around $4/Watt, and with the launch of Applied Materials' 5.3 sq meter PV cell production line, the first of which is being built now, the cost of the cells will be in the range of $2.5/Watt by early next year.
The discussion covered an optimistic outlook for efficiency improvements with silicon based PV, which can be provided by concentrators (light is focussed onto an area of PV by mirrors/optics) and tandem cells (several stacked cells which are each optimised for a particular light wavelength). Boeing Spectrolab has achieved efficiencies of over 40% with tandem cells. In comparison, nature's equivalent - photosynthesis - has efficiency in the range of 5%. However, IDTechEx felt that while the discussion was focussed on cost per watt and efficiencies, other parameters such as weight per watt were not addressed - where new technologies can be lightweight, flexible and even transparent enabling new opportunities not possible with current types of PV cells.
The following slide from NREL shows examples of the companies involved with thin film PV technologies. 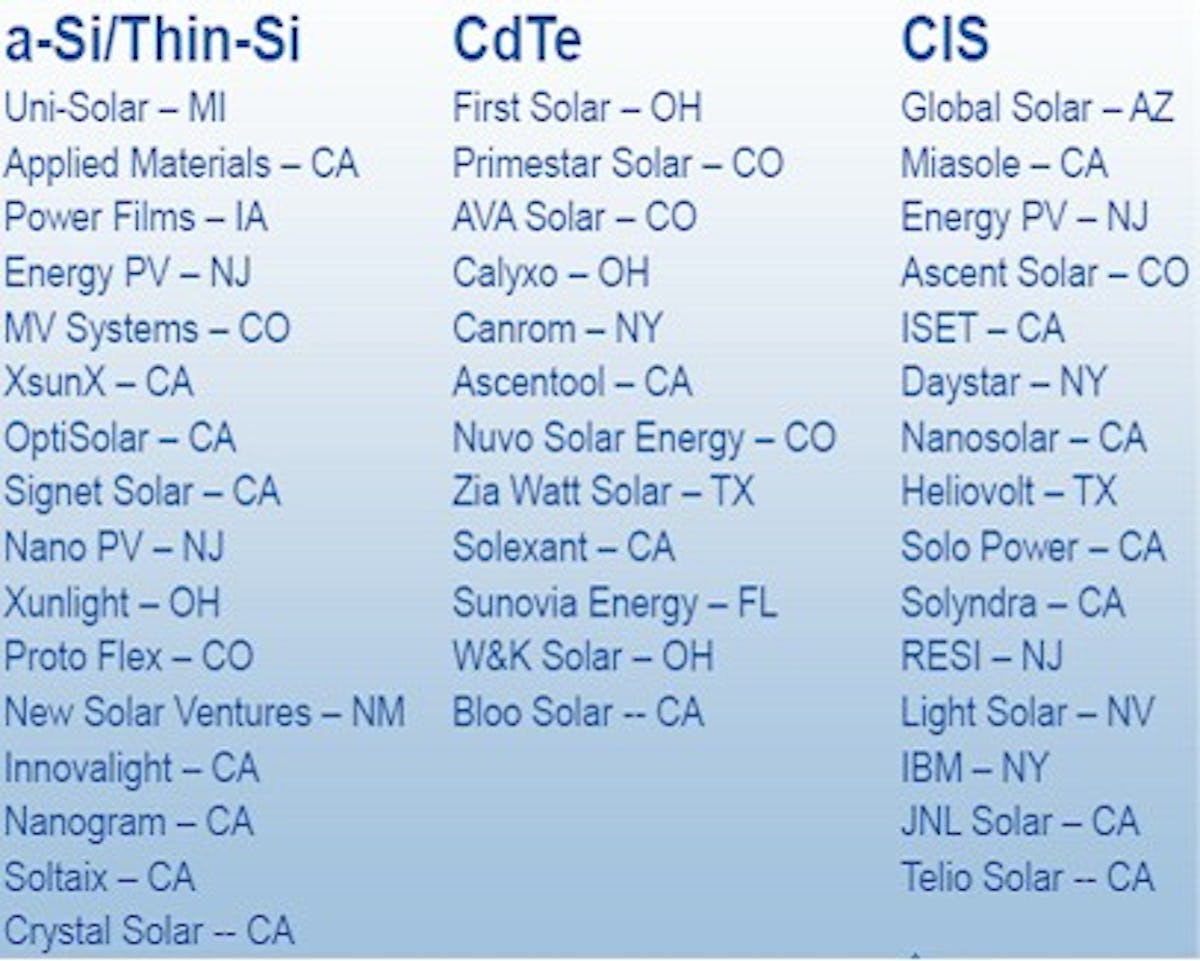 Source: NREL
The SEMICON West event also featured a presentation session covering printed electronics. Tim Von Werner, Senior R&D Manager at Plastic Logic, confirmed that most of the equipment has now been installed in their $100 Million manufacturing plant in Dresden. The plant has a capacity to make 1 million display panels a year, with organic thin film transistors driving E-ink front planes for flexible e-book readers. Despite originally doing a lot of work with printing, this is not a big feature in the manufacturing process at the moment.
Vik Pavate of Kovio also presented, and confirmed the company are now tooled up in their new 100,000 square foot facility in California, and they are due to start production later this year of printed RFID tags using their printed silicon based semiconductor. Kovio will be presenting at the IDTechEx Printed Electronics Asia and Printed Electronics USA events this year covering exciting product developments.
E-ink reported that there are now over 8 electronic readers in production, as shown below. This year Polymer Vision will be launching a flexible display in a cell phone followed by Plastic Logic launching a flexible e-reader early in the new year. 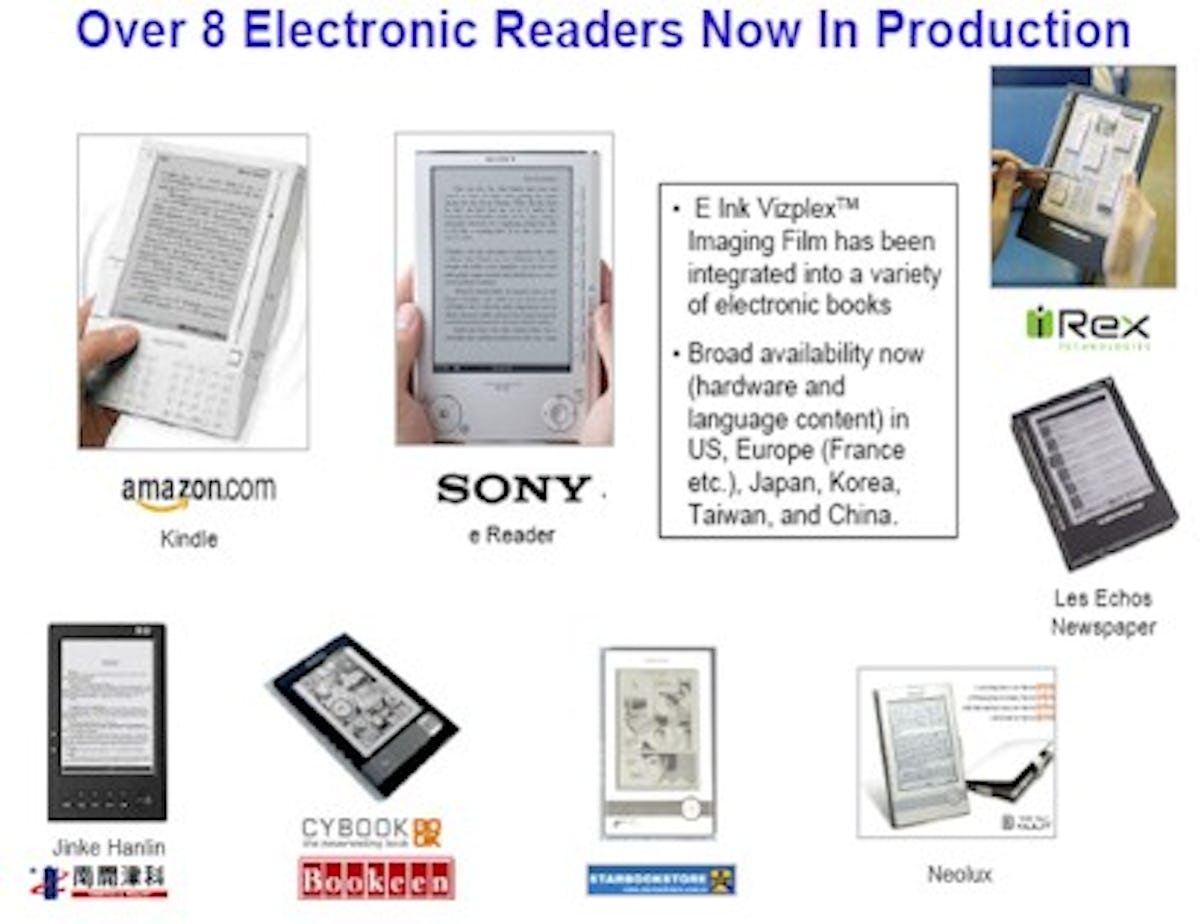 Source: E-ink
The difference in approaches by companies developing a flexible TFT backplane with an E-ink front plane was summarised as shown below. 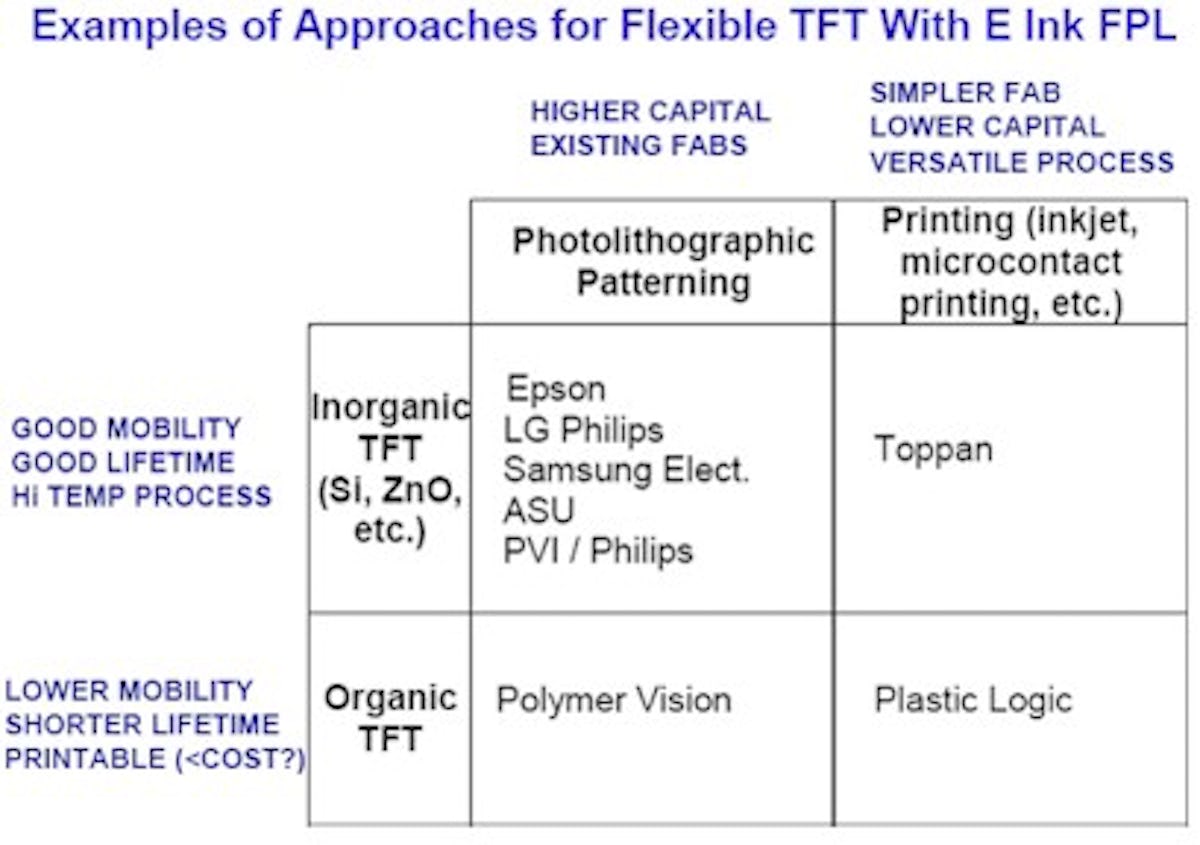 Source: E-ink
E-ink will also be presenting at the IDTechEx Printed Electronics USA event this December in San Jose, CA.