In the last few years there has been increasing work on inorganic semiconductors. Kovio, for example, has announced mobilities exceeding 250 cm2/Vs using their "liquid silicon" ink.
Another exciting printed inorganic semiconductor is Zinc Oxide (ZnO). This can be used to create transparent transistors, as shown in the image below. Transparent transistors are an exciting proposition, for example, active matrix LCD displays employ transistors to drive each pixel, but using current transistors which are not transparent the portion of the display glass occupied by the addressing electronics is not available for transmission of light through the display. Transparent transistors would allow greater light transmission through the display, thereby improving display performance. Of course, beyond this transparent electronics can do many new things.
Oregon State University working with Hewlett Packard demonstrated solution deposited ZnO transistors several years ago with a mobility around 0.3cm2/Vs. Others now claim mobilities exceeding 50 cm2/Vs where the transistors are not solution processed. Technology from Hewlett Packard has been licensed to Inpria and Xtreme Energetics. In addition, many other companies and academic institutes are also working on ZnO formulations including the University of Cambridge CAPE; Technical University of Lisbon; Tokyo Institute of Technology; Toppan Printing; Canon; NEC; Samsung; Pelikon; Matsushita as a few examples. ITRI, Taiwan, is working with an industrial partner to commercialize ink-jetted ZnO transistors.
Just last week on July 22 2008, researchers at Eastman Kodak published a patent for printing metal oxide transistors, where they deposited a colloidal solution of zinc-oxide-containing nanoparticles on a substrate, at a substrate temperature of 300º° C. or less, where the nanoparticles are the reaction product of reactants comprising an organozinc precursor compound and a basic ionic compound. The development here is the low temperature process used. 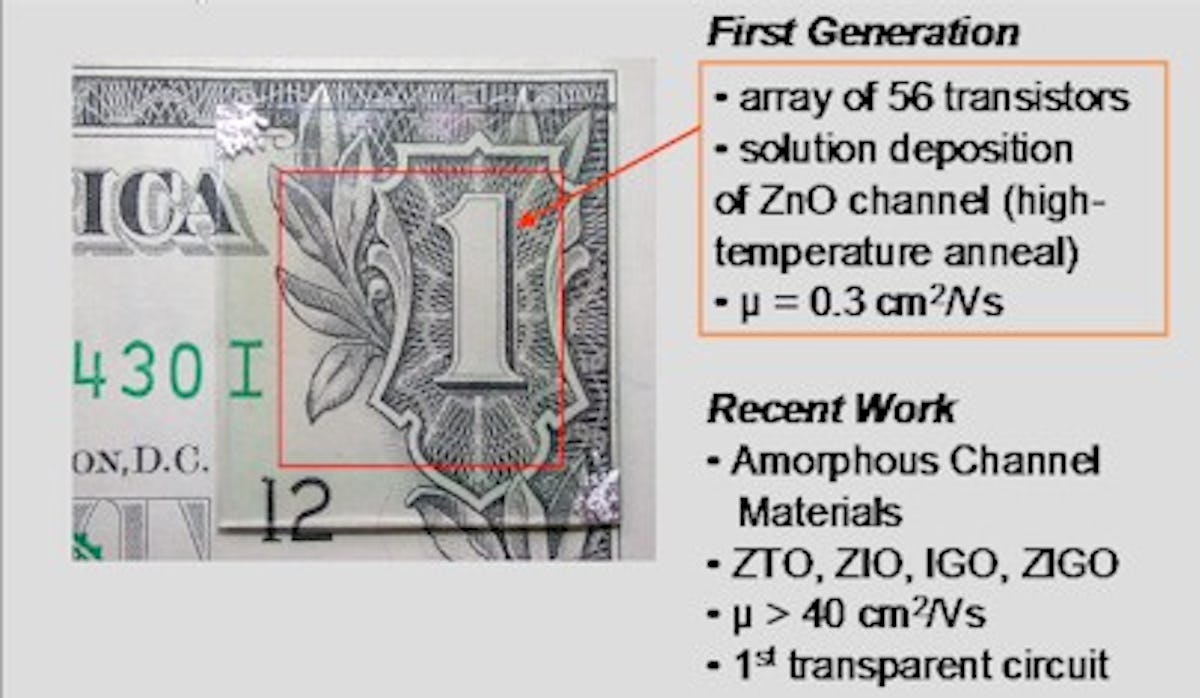 Source: Oregon State University, Hewlett Packard, IDTechEx
However, the materials developed have been used to demonstrate n-type transistors, but p-type transistors have not been available beyond unreproducible experiments. This is the opposite of organic semiconductors, where p-type transistors have been easier to make, with n-type only becoming possible more recently. Being able to construct both types of transistor enables CMOS devices to be made, which has two important characteristics - high noise immunity and low static power consumption. Significant power is only drawn when the CMOS device switches between on and off states. Therefore CMOS devices do not produce as much heat as other forms of logic.
It is extremely difficult to prepare p-type ZnO and only a very few successful examples are reported using a co-doping method which involves simultaneous doping of an acceptor impurity and a donor impurity, but these results have not been easily reproducible. As such, a reproducible process to obtain the p-type ZnO has not been established.

There are now two organizations that IDTechEx is aware of, and many more working on the topic, claiming p-type ZnO transistors are possible with reproducible results. Engineers at the University of California San Diego (UCSD) have synthesized zinc oxide (ZnO) nanoscale cylinders that transport positive charges - so-called "p-type ZnO nanowires." The University is looking to use these to build LEDs, reporting that "They are endowed with a supply of positive charge carrying holes that, for years, have been the missing ingredients that prevented engineers from building LEDs from ZnO nanowires. In contrast, making "n-type" ZnO nanowires that carrier negative charges (electrons) has not been a problem." Deli Wang, an electrical and computer engineering professor from UCSD's Jacobs School of Engineering says "Zinc oxide nanostructures are incredibly well studied because they are so easy to make. Now that we have p-type zinc oxide nanowires, the opportunities for LEDs and beyond are endless."
To make the p-type ZnO nanowires, the engineers doped ZnO crystals with phosphorus using a chemical vapor deposition technique. Adding phosphorus atoms to the ZnO crystal structure leads to p-type semiconducting materials through the formation of a defect complex that increases the number of holes relative to the number of free electrons. However, these are in the form of nanowires, useful for a variety of applications including transistors, spintronics, UV detectors, nanogenerators, and microscopy. Transistors have not yet been fabricated but Wang says, "P-type doping in nanowires would make complementary ZnO nanowire transistors possible."
Secondly, in May this year, researchers at Sanyo Electric Co., Ltd., Japan, were awarded a patent governing the fabrication of p-type transistors by improving the method of co doping the Zinc Oxide with an alkali metal and hydrogen. They claim this has been easily reproduceable.
However, there is still much to do - currently no-one has developed solution processable p-type ZnO transistors.
IDTechEx will be covering these developments at the IDTechEx Printed Electronics USA event on December 3-4, San Jose, USA.
Top image: SEM image of p-type ZnO nanowires.