Printed electronics is a term used to encompass printed and potentially printed electronics and electrics. Indeed, with these new technologies, electronics and electrics are merging, an example being the planned window that gathers energy from the sun and can be switched to become a light or a cinema screen.
The devices involved constitute a market of around $1.5 billion today that will grow exponentially to about $300 billion in twenty years. It will stretch the virtuosity of the chemical industry and create a market for over $25 billion of premium priced, specialty chemicals by 2018 and approaching $200 billion in 2028. Little wonder that chemical giants such as BASF, Sumitomo Chemical, Merck and Solvay are moving strongly into this field, including major acquisitions in their strategies. For example, Dow Chemical has just spent $15 billion to buy Rohm and Haas and Henkel has bought half of ICI. Sumitomo Chemical spent $280 million on Cambridge Display Technologies for its intellectual property in flexible polymer Organic Light Emitting Diodes OLEDs that are printed. The joint venture DuPont Teijin Films is leader in the specialist substrates needed.

An extremely broad range of chemicals is needed because this new market includes laminar photovoltaics (solar cells), transistor circuits, displays, sensors and batteries today with printed fuel cells, lasers and other devices to come. Some of the printed photovoltaics are already in production. Several printed transistor types will be enter production in the coming year. Some printed displays, sensors and batteries are in production with many more to come.
The uses for each of them vary from an interactive label or medical tester that may have to work for only a few seconds to solar power sources in place for twenty years. Some of these devices will outperform today's television screens, silicon chips, silicon solar cells and button batteries but others will simply be "cheap and cheerful". However, a high proportion of the devices will be deposited on top of each other to increase reliability and reduce the space they occupy and that creates challenges from one layer reacting with another. Most will be flexible and employ low cost plastic or paper substrates. That is a problem because some of the chemicals deposited to make these devices today are brittle or need high temperature annealing. Some printed devices currently use materials that must be replaced because of scarcity or environmental and safety concerns, so, on all these counts, there is much work to be done by the chemical industry.
Examples of the sheer breadth of chemistry involved are given below. Note how nano technology is appearing and how start-ups and companies outside the chemical industry are starting to enter the business. Existing chemical companies need to pay attention.
Table Examples of materials needed for printed electronics and their suppliers. 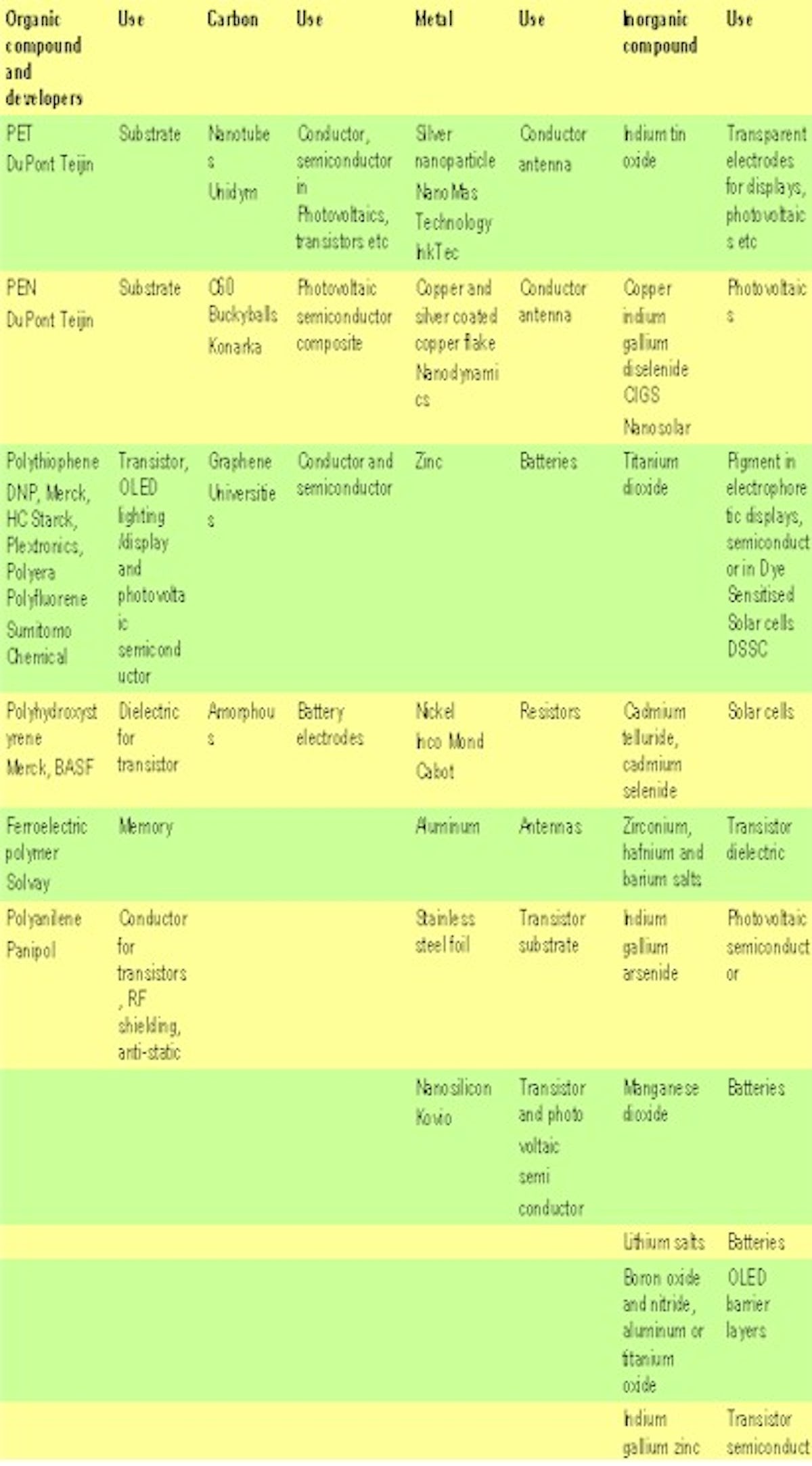 Source: IDTechEx
For a chemical company to take a major stake in this huge, emerging market frequently calls for a combination of organic and inorganic expertise. Nanoparticles of metals can be annealed at one tenth of their bulk melting point but losing the organic carrier in that process is an important challenge. Silver is a biocide and it is becoming scarce, so copper is an obvious choice to replace it in printed conductors.
However, there are problems including which copper precursor ink to use, poisoning of circuits, oxidation making interconnects troublesome, high temperature needed to anneal copper precursor inks, their toxicity and resulting conductivity being much less than bulk. Both organic and inorganic chemistry are being brought to bear to solve that problem.
Then there are the extremely fragile chemicals in Organic Light Emitting Diode OLED displays, signage and lighting, all of which need to be thin, flexible and low cost to tap the largest potential. Barrier layers to prevent ingress of water and oxygen must meet extremely stringent requirements for chemical permeability, such as better than one millionth of a gram per square meter per day and preferably be tightly rollable after deposition. Many alternate layers of polymer and inorganic oxide are currently favoured and some actually react with water and oxygen to trap it. Again, organic and inorganic chemistry are used in harness to solve a problem. Then we have thin film lithium polymer batteries that we must learn to print and so on.
Even some of the smallest chemical companies can solve these problems given their specialist knowledge. That is why the world's largest chemical company BASF recently licensed IP from Polyera and Rieke Metals that permits the manufacture of improved n and p type transistor semiconductors and transistor dielectrics as inks. Just the ink formulation is a challenge. For litho printing the ink must have low viscosity only when under pressure and even for inkjet printing, particle size of over one micron can be a problem.
The bottom line is that chemical companies have huge opportunities in the new world of printed electronics and the smart labels, smart packages, moving colour posters and rollup computers that will result. It even extends to edible electronics (recent Kodak and other patents), invisible electronics, woven electronics and bionic man.
For more, attend Printed Electronics USA, San Jose, December 2-5, where Pfizer, Nokia, Northrop Grumman, Kraft and others will convince you of the market pull for these chemicals and BASF, HC Starck, Plextronics, Sun Chemical, Unidym, InkTec, NanoMas Technologies, Rieke Metals, Chisso Petrochemical Corporation and many universities from across the world will describe the rapid progress in producing the plethora of specialist chemicals that are required.
In Asia, attend Printed Electronics Asia, Tokyo, October 8-9.
Read Inorganic and Composite Printed and Thin Film Electronics 2008-2018.