Photovoltaics "PV" is progressing from the old crystalline and amorphous silicon to thin film technologies that are increasingly printed. There are several types of solar cell involved and they are all needed as the market grows and fragments. For example, transparent versions based on inorganic compounds are valued on the face of a wristwatch or on a window. Dye Sensitised Solar Cells are already printed reel to reel and they are exceptionally efficient in poor light levels and some even work from heat. They combine inorganic and organic compounds. Printed organic photovoltaics on its own is another option. It promises uses involving very low cost and wide area, despite poor efficiency but life needs to be improved. Thin film cadmium selenide/ cadmium telluride versions have already beaten silicon on cost of ownership but it is proving difficult to print so that volume production can be achieved at even lower cost.

The approach to the new photovoltaics is very different in Japan. Unlike Western car companies, Honda is making photovoltaics partly because it could help to create the car of the future. The Western car companies take a shorter term view and they even struggle to catch up with Japanese hybrid vehicle technology and the batteries required. In the US, the European invention of Dye Sensitised Solar Cells DSSC is largely ignored but Japan, like the Europeans, is energetically pursuing this option. It is intensely interested in G24 innovations in the UK which is already ink jet printing these, reel to reel and creating uses from the Antarctic to Africa.
All is not plain sailing in Japan, however. Thanks to government subsidies, the Japanese used to have more PV installed than any other country but the subsidies have now largely dried up. In 2007, PV installations plummeted to 165MW from 287MW the year before. It is the more consistent Germans that now have more installed PV than the rest of the world combined. Some in Japan believe that even conventional silicon can achieve grid parity by 2013 and that it therefore does not need much of a fiscal push. Others see strong reasons for supporting the industry, notably development of a variety of types of thin film PV.
For example, what goes on a package or toy is unlikely to be the same as a generator of power into the grid and Japan can excel at all of these. They have an ally in new Prime Minister Fukuda. The Fukuda vision for renewable energy puts PV at the forefront, with the fastest adoption. He wants 56 GW installed PV capacity by 2030 and subsidies to make it happen.

Many technologies are seen as contributors to this grand vision and already the Research Center for Photovoltaics at the National Institute for Advanced Industrial Science has demonstrated 15.9% efficiency for Copper Indium Gallium Diselenide CIGS cells on a rigid substrate and is set for 15% efficiency 30 by 30 centimeter panels by year end. Showa Shell is reportedly near to a major rollout of this technology. Honda Soltec already has its reel to reel CIGS PV factory on stream. Honda's next-generation solar cell achieves 50% reduction in the amount of energy consumed during the manufacturing process compared to what is required to produce conventional crystal silicon solar cells. This makes the new solar cell more environmentally-friendly by reducing the amount of carbon dioxide generated even from the production stage.

Matsushita, Micro-tec, NEC, SEL, Sharp and Tokki are among the other companies developing inorganic compound photovoltaics in Japan, as are many local universities and research institutes. Several are working on DSSC which combine inorganic and organic materials. Konica Minolta, Micro-tec, NEC, Nissan Chemical Industries, SEL, Sharp and other companies are working on purely organic PV backed by many of the leading Japanese universities.
IDTechEx has examined 446 programs on printed and potentially printed electronics in East Asia and they illustrate how Japan is in the ascendant over other countries of the region as shown below.
446 printed and potentially printed electronic projects in East Asia by device and country 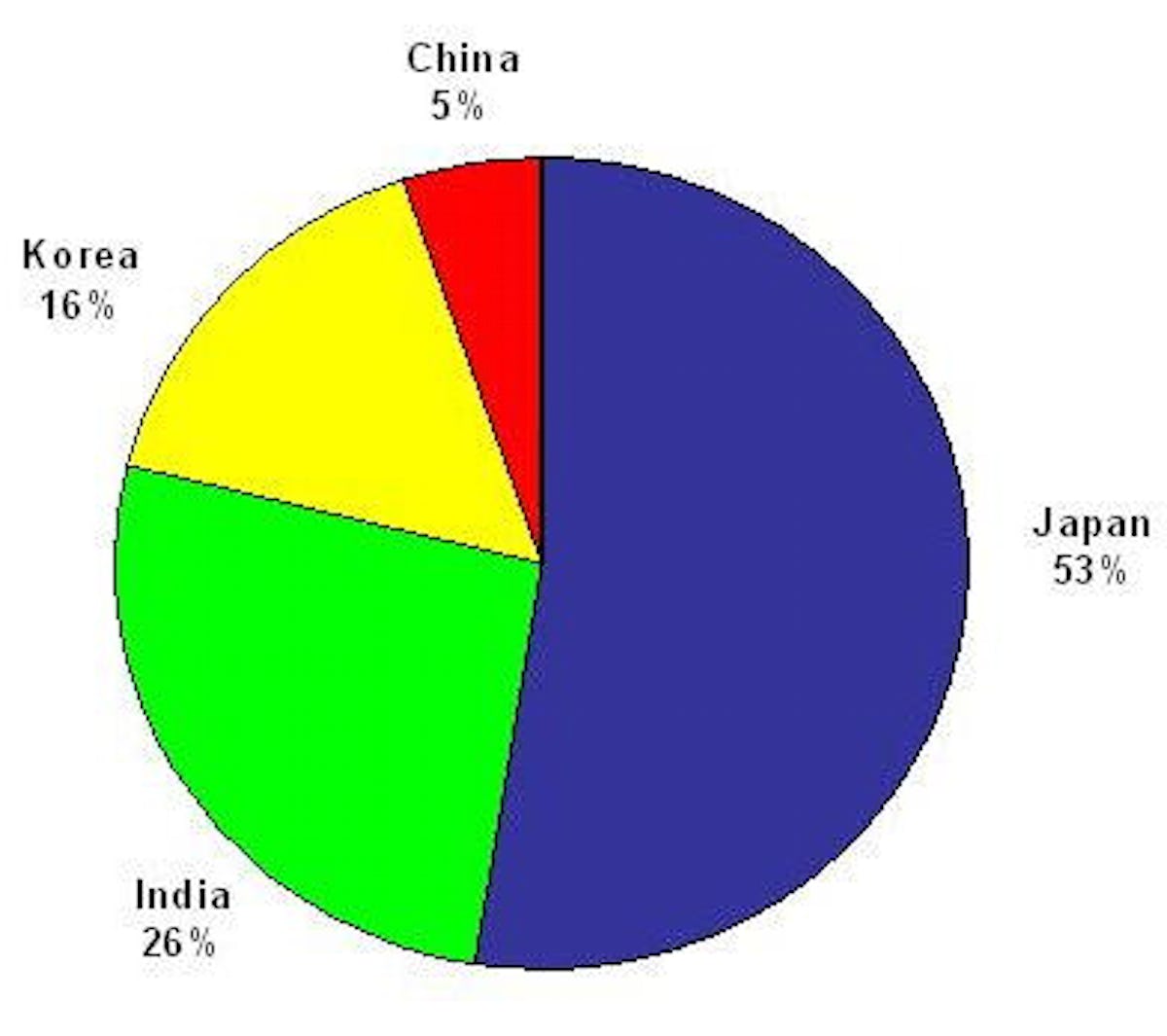 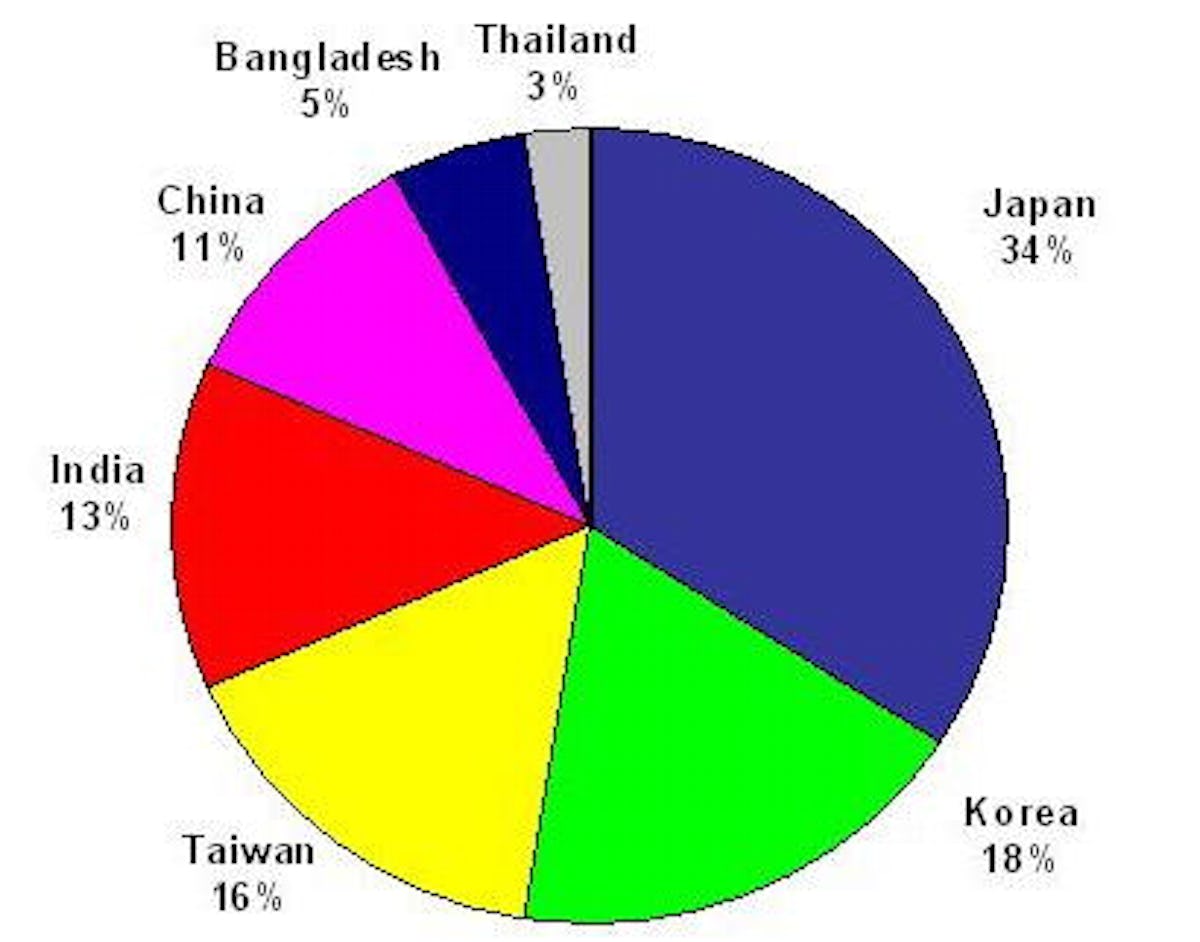 Enthusiasts for the new photovoltaics will also be interested in the development of transparent transistors based on inorganic compounds. For example, Hewlett Packard, which will speak at the conference, has recently licensed a company in America to ink jet print its transparent transistors onto photovoltaics as drivers. At the conference, Sony and the University of Tokyo will present on different technologies and structures for fully printed organic transistors and Professor Iain Mc Culloch of Imperial College UK will look at the commercial opportunities for such devices. The University of Cambridge in the UK will describe "Fabrication and Stability Characterisation of Thin Film Transistors Based on Indium Zinc Oxide Deposited at Low Temperature", Nano-ePrint of the UK will describe planar transistors, Kovio of the US will present ink jet printed nanosilicon transistors and Thin Film Electronics of Sweden will describe progress towards commercialisation of printed ferroelectric organic memory.
Keiichi Utaka, Managing Director of Toppan Forms and Raghu Das, CEO of organisers IDTechEx will clarify different aspects of the global market for printed electronics and what comes next. A large number of speakers will cover the new electronic inks and processes, including Hitachi Chemical, Asahi Kasei Chemicals, OTB Engineering/ Pixdro, BASF and Merck. Displays will also be a major focus with presentations by the leaders in OLEDs and other printed displays including Samsung, Bridgestone, E-Ink, Kodak and DuPont. There are optional Masterclasses and visits to many local centers of excellence.
See www.idtechex.com/PEAsia for more.
Also read Printed and Thin Film Photovoltaics and Batteries.