E ink, based in Cambridge, Massachusetts is synonymous with e-paper and its applications. Founded in 1997 on research that started at the MIT Media Lab, it has raised $150 Million and now has around 130 employees. Its electrophoretic display technology (which is bistable, flexible, reflective and robust, to a name a few attributes) is used in all electrophoretic e-readers. While the technology has been used for several years in a range of products - from flash memory sticks to e-readers to watches, over the last few months there has been some significant developments, from larger area e-readers (Plastic Logic, Brother Industries, iRex Technologies) to a display on the magazine cover of Esquire magazine - sold throughout the US in September. In addition, there have also been significant technology developments, such as going from black and white displays which used to take up to one second to refresh to colour displays with video motion, thanks to new controllers and colour display films. As another example, four greyscale level displays are being replaced with 16 greyscale versions. Raghu Das at IDTechEx met with Sriram Peruvemba, VP of Marketing at E ink, to learn more about these developments and the market opportunity.

As previously covered in Printed Electronics World, this month Esquire magazine featured an E ink display on the cover of 12% of its magazines sold in the U.S. IDTechEx has acquired several of the magazines. There are in fact two displays on each - one on the outside, and one on the inside. The magazine retails for $5.99 (two dollars more than versions without the moving display), and the display was sponsored by Ford (the display on the inside cover of the magazine lights segments of a new Ford vehicle called the Flex, to create the perception of motion). Images of the magazine are shown below. 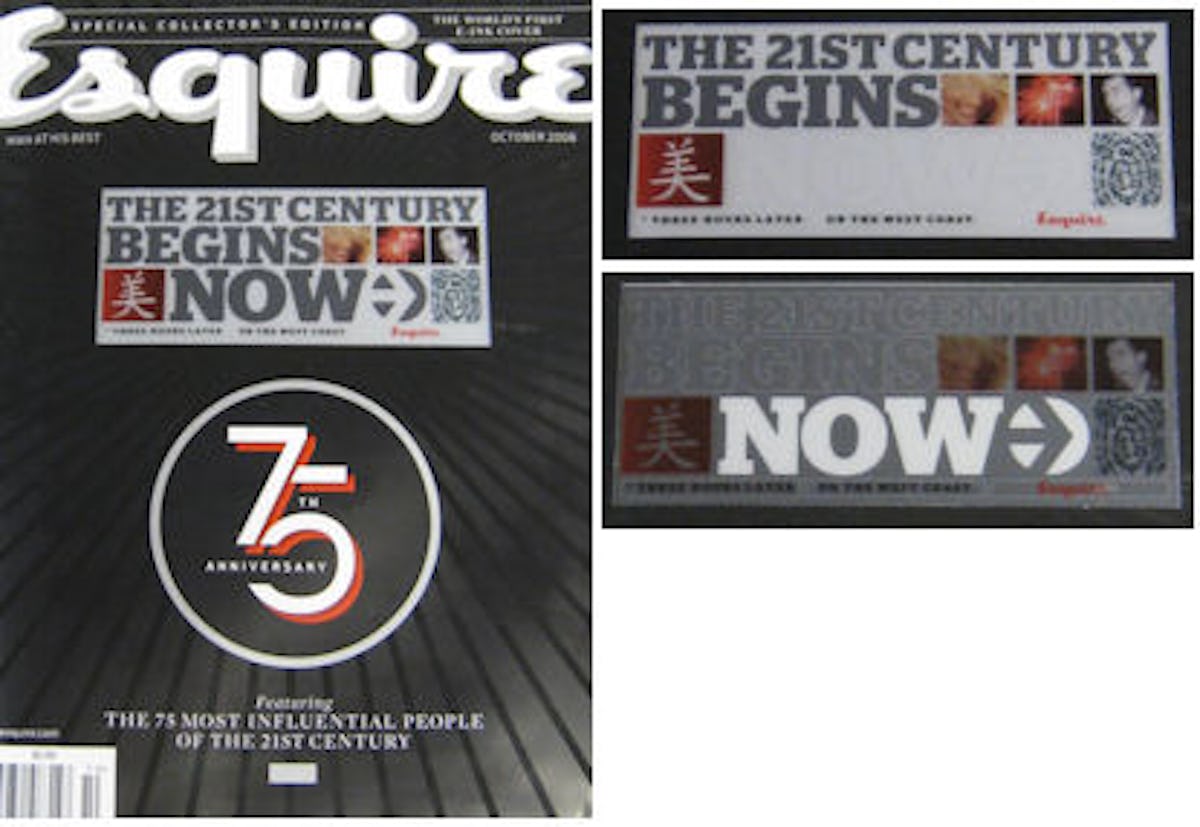 Left: Front page of the October edition of Esquire magazine, $5.99
Right: Examples of different states of the display
Peruvemba reported that Esquire magazine sold many more advertisements in that edition, and Esquire has plans to do it again, highlighting that is was probably a profitable venture for them. In this case E ink supplied the whole contract, and Peruvemba described the biggest challenge as working with the binders to integrate the electronics into the front of the magazine - a first for both parties. Peruvemba told us that since the magazine launch they have received a huge amount of interest from companies for similar applications - particularly high end retail products and other novelties.

While E ink is supplying displays into a wide range of products, their sights are firmly set on the market for e-reader devices. This began with e-books, with 11 products currently on the market, followed now with e-newspapers (supported on some e-reader products, and to be available on the larger e-readers products that are emerging). However, Peruvemba thinks a key application driver for e-readers will be from the business and academic community, where school text books will be available in digital format. He cites the high value of such school books, and their weight, as to why these should move to electronic versions, plus the ability for new features such as faster searching and cross referencing. Newspapers, already in general decline, have an enormous logistics cost, which can be eradicated by reading them with an e-reader, while the price does not necessarily have to change - making it an exciting proposition for newspaper companies.
Other than the larger area e-readers available on the market (see our earlier article E-readers Gain Momentum: More Large Screen Products Launched), smaller e-readers using E ink displays are available from companies such as iRex Technologies, Amazon, Sony, Jinke, Bookeen, Astak Mentor, Nuut, PolymerVision, Netronix, Bebook and Starbook.

Here comes colour video if you want it

E ink showed IDTechEx a video, in colour, on one of their new displays still in the lab. Unlike an LCD, where the whole display is refreshed for each frame, on an e-paper display you only need to refresh the area that is changing. For example, if you are displaying a page of a newspaper, and that page has an image which is a movie, only that part of the page has to be changed and the rest stays the same - due to the ability of the display to be stable once the voltage has been removed.
To achieve this, new controllers are needed and E ink has worked closely with chip companies to build display controller chips to enable these capabilities - one example is the Epson controller which enables much faster refresh rates. Since that development there is a lot of interest in pen input. Wide availability of such controllers helps open up the product landscape.
E ink will launch its colour display in 2010.

To date, E ink has over 15 million displays in use in a wide variety of products. Other than the e-readers described above, E ink displays are used in a wide variety of applications including secondary displays on cellphones (Hitachi, Motorola); Delphi car key fobs; Lexar USB memory sticks; smart cards; electronic shelf edge labels; battery indicators and watches (Seiko).
Retail Shelf Edge Labels from UPM 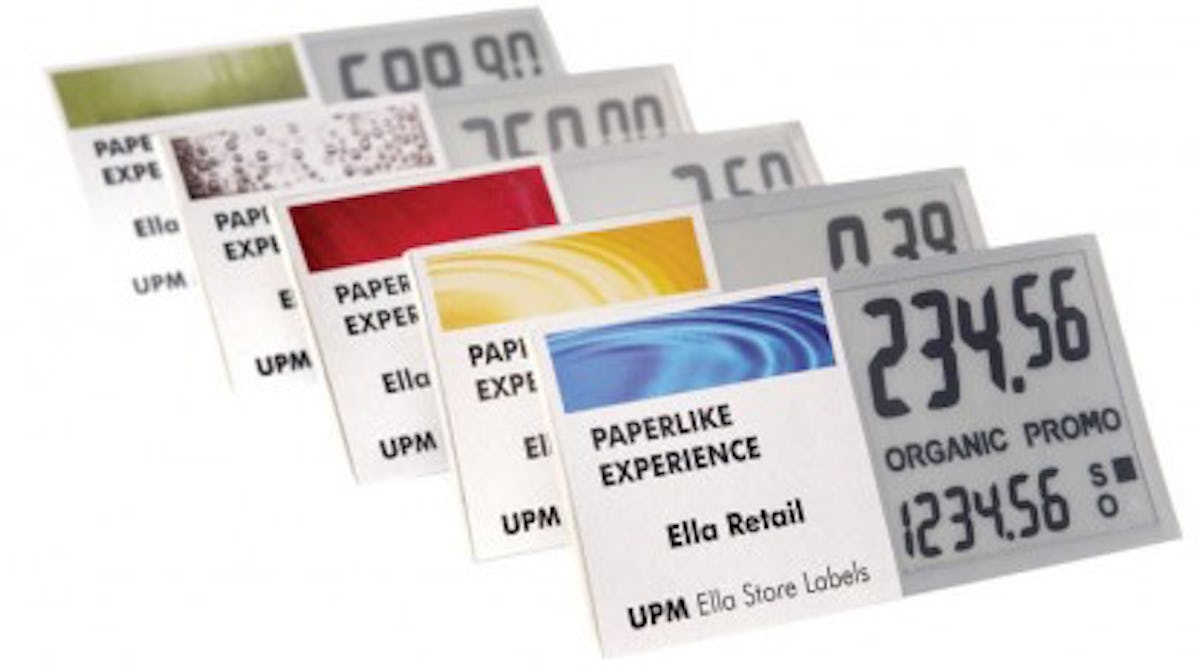 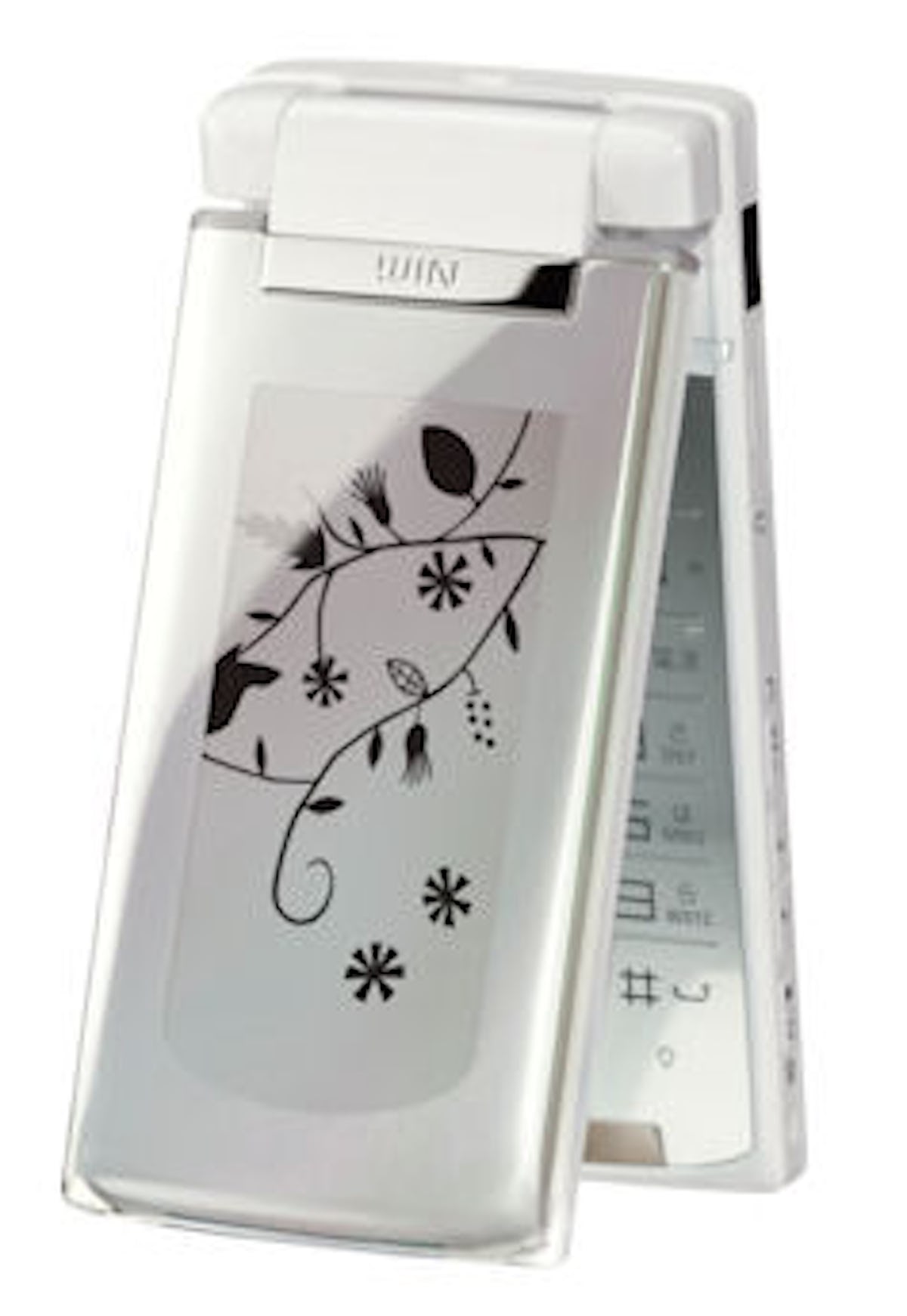 Source: E ink
Peruvemba tells IDTechEx that at the time of our interview they have not had a single end user customer return a product because of a faulty display (although he tells me he wishes he did because he says people don't believe him).

Based on IDTechEx research, we expect that the money spent on modules from vendors such as LG and Primeview International that incorporate E ink displays will exceed $100 Million this year. The value of the devices themselves, where the display can range from a few percent (e.g. a cellphone secondary display) to a much higher proportion of the cost (e.g. an e-reader), is several hundred million dollars.
Unlike OLEDs, which have been slow to take off because they typically compete with LCDs and are struggling to side-step the fight because of technical challenges achieving large area and flexible OLEDs, most applications of e-paper are new market creations where existing display technologies cannot compete - from e-book readers (high contrast, low power, light weight, robust) to displays on the front of a magazine cover. Indeed, e-paper is well suited to the emerging work on printed transistors, which are voltage driven as the displays are (unlike OLEDs which are current driven). Of four companies bringing printed thin film transistors to market over the coming months, two are focussing on RFID (Kovio and PolyIC), and two (Polymer Vision and Plastic Logic) on e-readers, using their transistors to drive E ink displays. We also note that Kovio and E ink have a common founder - Prof Joseph Jacobson of MIT. The e-paper technology is not dogged by technical issues such as lifetime, flexibility and yield as others are - it is ready and productized now, and surging towards the primetime.
Peruvemba will be presenting on these developments and market outlook at the IDTechEx Printed Electronics USA 2008 conference and exhibition in San Jose on December 3-4.
For more information see www.eink.com