There is probably too much chasing of the obvious by printed electronics companies. For example, transistor printers dream of making RFID and display backplane drivers because these are obvious, quantifiable opportunities, yet most of the potential market may well lie elsewhere in a number of large niche opportunities. In these niches, it may often be the case that the transistors are not replacing anything. This makes the potential more uncertain but it does reduce the amount of competition. For example, the different University of Tokyo and Sony printed organic transistors are unlikely to set records for temperature or frequency range but they will be tightly rollable, environmental and low cost, opening up many exciting possibilities. The very different Nano EPrint design of single layer printed transistor seems to perform at higher frequency but with other limitations such as on-off ratio to tackle. Its remarkably simple construction, rollability and so on open up huge opportunities. The same can be said of the transparent, high frequency zinc oxide transistors deposited at low temperature by Cambridge University in the UK. Think e-labels, e-wallpaper, e-packaging.

Thin Film Electronics of Sweden is well on the way to commercializing its printed ferroelectric memory and it will sensibly avoid meeting FRAM silicon memory head on although this is a far simpler, potentially lower cost memory construction. This capacitor like structure promises 100MB and later one gigabyte on a postage stamp and one of the first applications will be cards containing computer games. The technology will be invaluable for e-packaging and much else besides.

Another example of too much focus on the obvious is displays where almost everyone dreams of replacing today's laptops, television sets and mobile phone displays with something printed but the opportunities to create something new in the form of e-labels, e-packaging, e-readers and so on is a large, if less quantifiable, opportunity as well. For example, Bridgestone in Japan has a novel type of colour e-paper that is flexible thanks to "liquid powder" display technology. E Ink commands the electrophoretic ink market that deservedly gets as much publicity as Organic Light Emitting Diodes (OLEDs) these days because it is available in flexible form and adequate life in watches and even radio controlled price labels in shops. However, OLEDs with very different properties are now opening up a variety of niches thanks to the pioneering work of companies such as Kodak in Japan, DuPont in the USA and Samsung in Korea.

Consider photovoltaics. Here the race is on for grid parity meaning the generation of distributed grid electricity competitively with that produced by power stations. Efficiency improvements are seen as the route to this but they will be a Pyrrhic victory if they are not accompanied by life of at least ten years. Nonetheless, there are a huge number of large niche markets that will be created by various forms of printed and potentially printed photovoltaics as exemplified below. G24 innovations, Gifu University Japan and National Chiao Tung University in Taiwan are targeting large niches in photovoltaics, for instance.
Examples of the niches in photovoltaics are shown below:
Examples of niche photovoltaic markets that will be created and some possible solutions 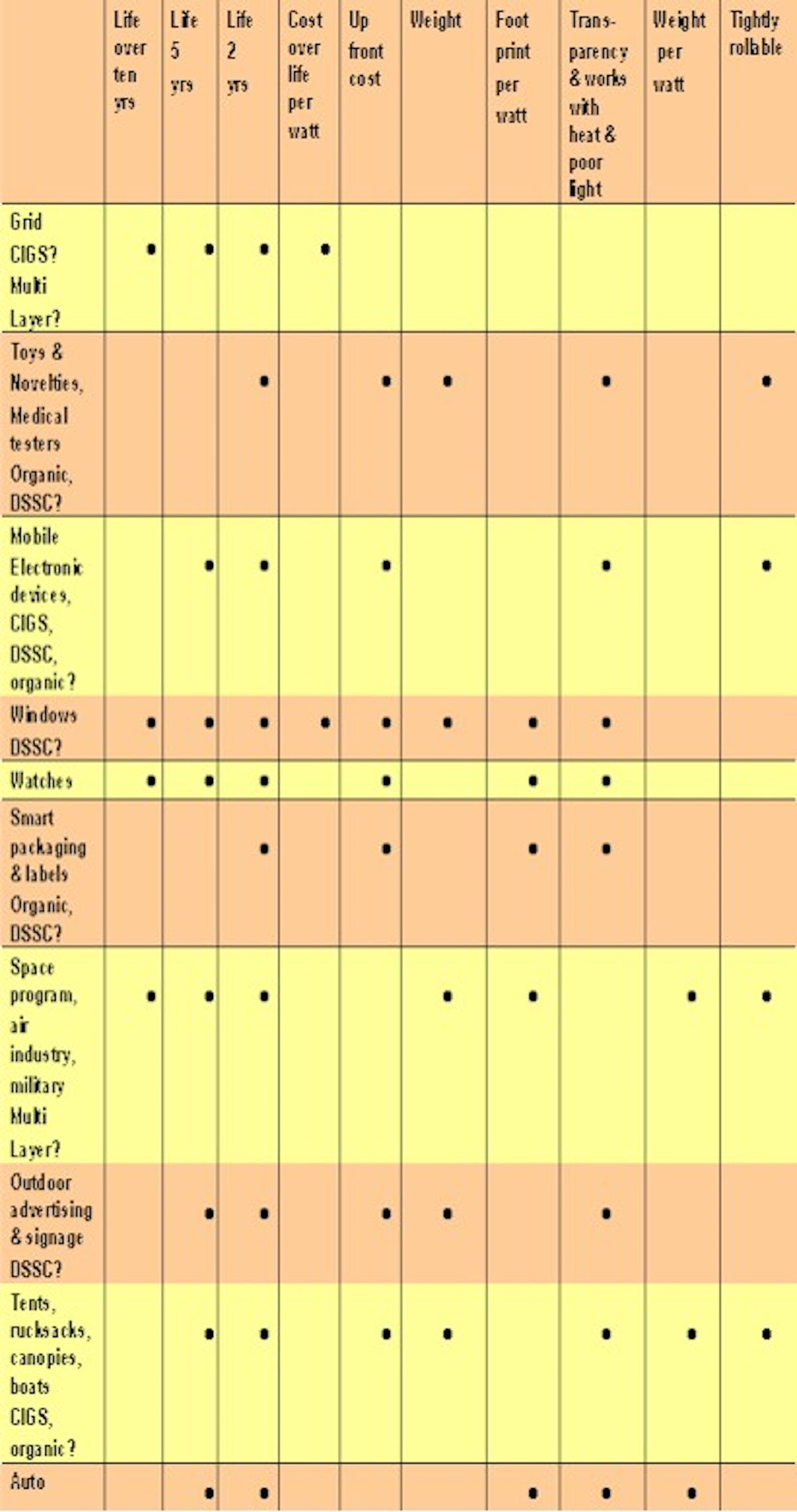 One beauty of printed electronics is that the different electrical and electronic components can be printed on top of each other, saving space and increasing reliability and sometimes they are all transparent. Of course, one ink must not damage another and low temperature annealing is vital if low cost flexible materials such as paper and plastic film are to be used. There is much sophisticated engineering and chemistry involved here, with iTi, Pixdro, Asahi Kasei, Merck, BASF, HC Starck, Hitachi Chemical and Frontier Carbon Corporation among the leaders.
Exciting new smart substrates increasingly form part of this "electronic plywood" such as NXT loudspeaker film which enables new sound, light and touch human interfaces. The printed organic battery of Waseda University can be charged very rapidly and it is already semi-transparent and tightly rollable. There are organic chemical and biosensors coming along from the University of California at Berkeley in the USA as well.
All the companies and universities mentioned in this article will be presenting at the remarkable IDTechEx conference Printed Electronics Asia in Tokyo October 7-9 www.IDTechEx.com/PEasia. We have secured visits for attendees to the leading companies in Japan including Toppan Forms, Dai Nippon Printing, Sony, Toppan Printing, Frontier Carbon Corporation and the University of Tokyo. Visit these companies to gain exclusive insight.
This is the second Printed Electronics Asia event from IDTechEx, given the size of the printed electronics market in that territory, as shown in the figure below:
2008 Market size for printed electronics by value $ Billion 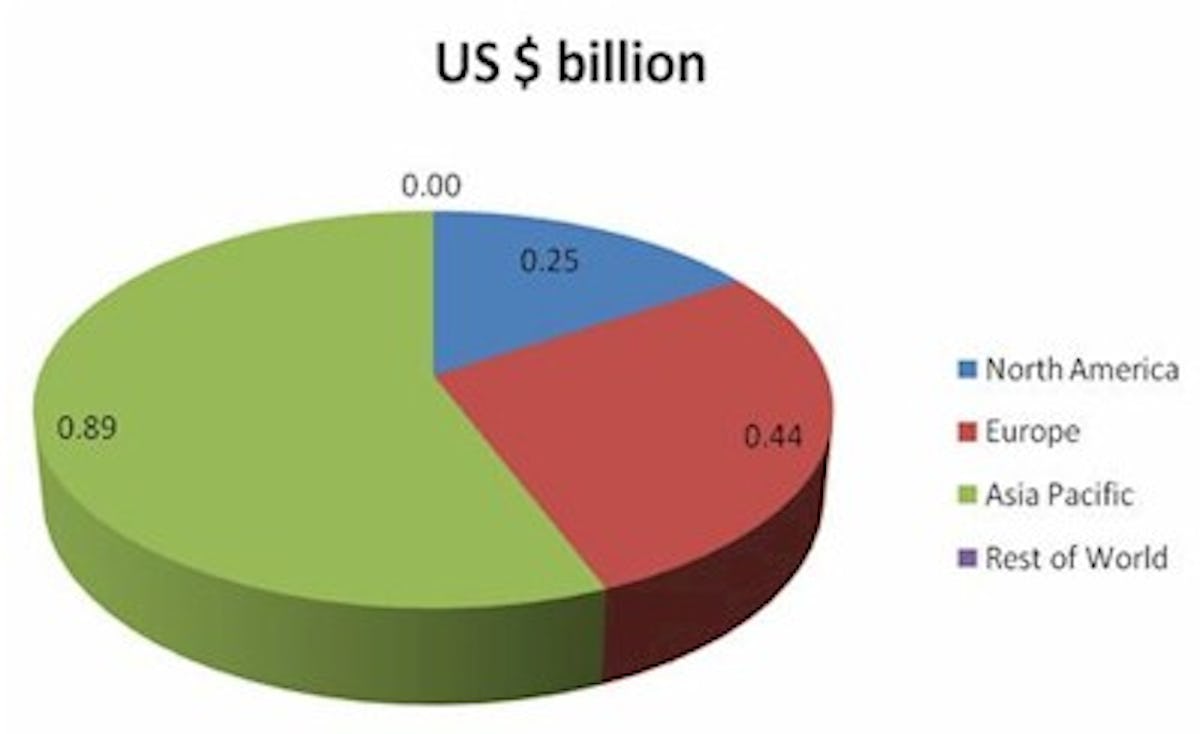 Source: IDTechEx Printed & Organics Electronics Forecasts, Players & Opportunities 2008-2028 www.IDTechEx.com/pe
The keynote presentation is a World exclusive: Mr Keiichi Utaka, Managing Director, Toppan Forms - a company bringing printed electronics to market, followed by Mr Amir Kashmoori, CEO of Kovio - giving their first presentation in Asia on the company's work. In addition, there are optional Masterclasses on many aspects of the subject before and after the conference and there is an exhibition. Places are limited to 100 attendees from Europe and North America.
This exclusive event is open to 100 attendees from European and American companies only, with an unlimited number of Asian companies attending (probably about 200), which ensures you gain maximum networking benefits from your attendance at this select event.
We provide introductions and all conference sessions have simultaneous Japanese/English translations. IDTechEx has covered progress of printed electronics in Asia for over six years, regularly visiting companies and speaking at events. This event brings all the highlights together for you. See www.IDTechEx.com/PEasia for full details.