IDTechEx is well known for organising visits to local centers of excellence alongside its conferences. It opens doors to premises not normally available to many delegates. Printed Electronics Asia was no exception. On 30 September, delegates were treated to visits to the University of Tokyo and the skyscrapers of Sony and Toppan Forms in central Tokyo.

The legendary Professor Takao Someya, famed for reprogrammable Braille using electroactive polymers,the wireless delivery of power, even under water, and many other breakthroughs, was host at Tokyo University.
Professor Someya is Associate Professor of the Quantum Phase Electronics Center at the School of Engineering. Delegates saw the clean room and the laboratories and it was explained that stretchable electronics and wide area sensors are priorities nowadays, a vital enabling technology being femtoliter inkjetting to make transistor arrays. Indeed, understanding the basic physics and chemistry is a focus using sophisticated instruments and tests at ultra low temperatures.
Professor Someya is sceptical of the potential for vertical organic thin film transistors VOFETs, with their poor on off ratio, preferring to work on the traditional horizontal geometries. He collaborates with the University of Osaka on ultra fine piezo inkjetting, achieving a remarkable three micron pattern separation using half micron drops which create one to two micron dots. His facility has the only pre-production line in a Japanese university that prints organic transistor circuits. Inorganic electrodes are used to get satisfactory conductivity.
For example, silver of a few nanometers in particle size is deposited on polyester and polyethylene napthalate substrates that vary from 12.5 to 100 microns thick. The resulting OFETs provide wide area sensors and actuators, involving "more than one thousand" transistors at a time.
Organic materials impregnated with one millimeter carbon nanotubes have been studied. His team has found a way to disperse carbon nanotubes into a liquid polymer in order to create a rubbery material that conducts electricity. They begin to create their elastic electronic material by grinding nanotubes with an ionic liquid of 1-butyl-3-methylimidazolium bisimide. They add the resulting thick, black paste or "bucky gel" to a liquid polymer and spread it on a glass plate. They then coat it with silicone rubber and leave it to set.
Currently, the team are optimizing the electric and mechanical properties of their elastic conductors. They are also investigating new economical printing processes which could enable the material to replace the fine wires in integrated circuits. Priority is ultrafine screen printing using metal meshes.
As well as improving existing technologies, he hopes the elastic conductors will open the doors to applications that have been closed for conventional silicon-based electronics - for example, electronic artificial skins.
The materials, which are more conductive than other elastic materials such as those with the traditional carbon impregnation, are an important step towards realizing elastic electronics for robotics and other electronic devices, including sensing skin. A punching technique was demonstrated which enhances the elasticity of the elastic polymer supporting a serpentine conducting pattern. 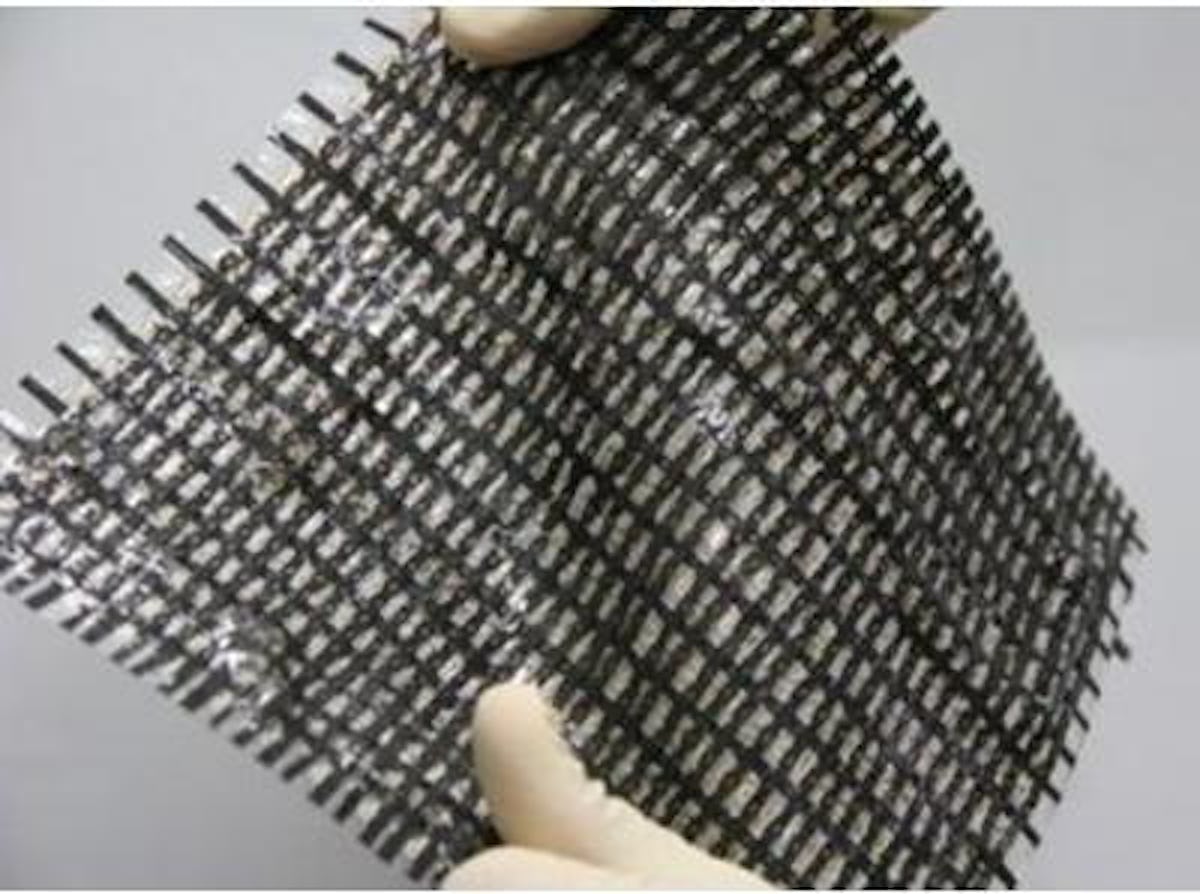 Source: University of Tokyo
In the past when researchers have tried to create nanotube-polymer composites, strong intermolecular forces between the nanotubes has always made the structures clump together, producing a weak material. However, by grinding nanotubes with an ionic liquid, the group has evenly dispersed them.
Prof Someya's team can swap as much as a fifth of the polymers's weight for nanotubes without reducing mechanical flexibility so the resulting material can be stretched up to 70% without being damaged.
Commenting on this work, Ray Baughman at the University of Texas has said, "This expands the application horizon of carbon nanotubes in an important new direction. The most surprising discovery is that the addition of up to 20% weight of nanotubes does not reduce elastic deformability". The visit ended with a slide show.
The researchers have recently presented their work in Science. 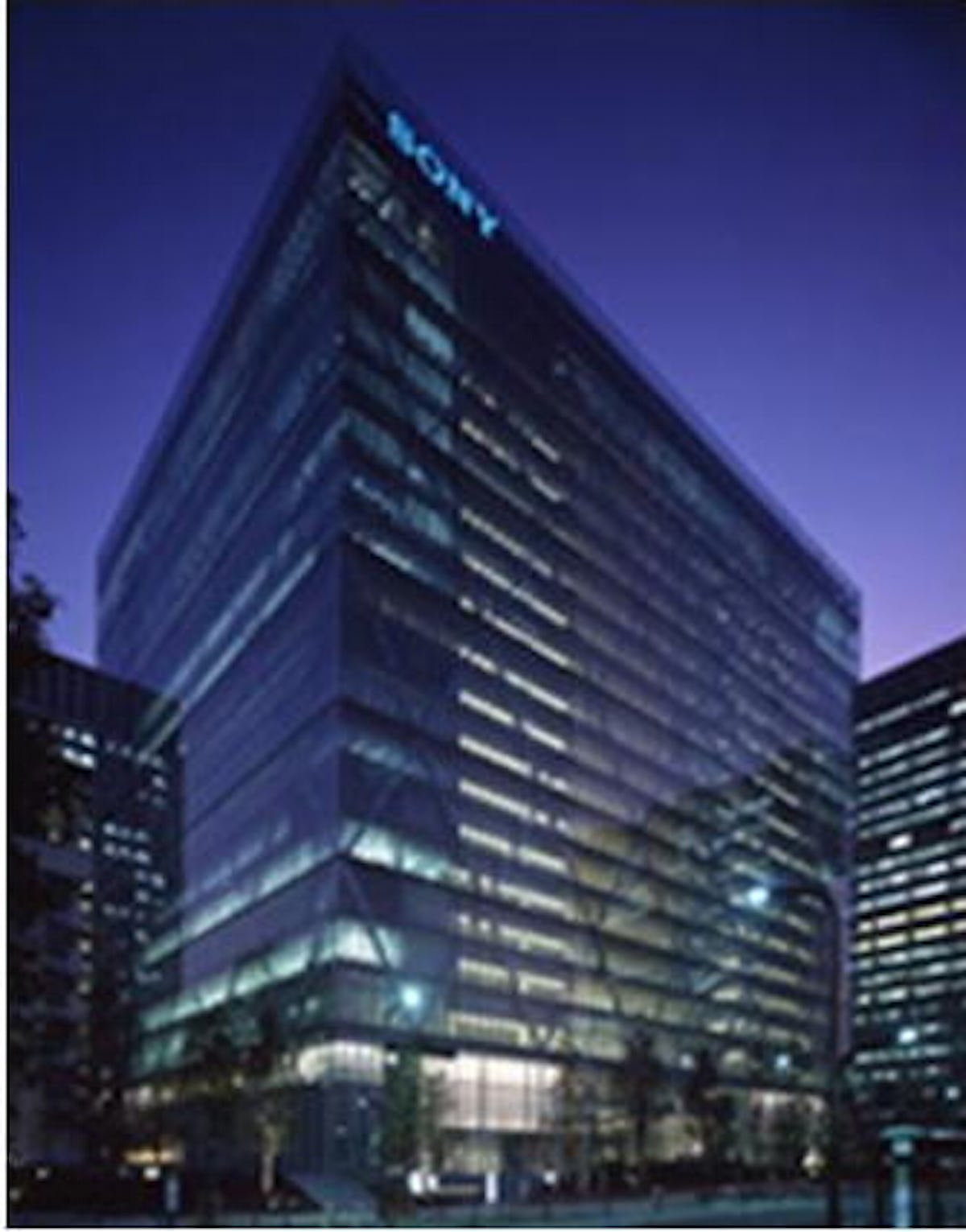 The Sony visit started with a visit to their awesome multimedia center where the latest cameras, mobile phones, music centers, television and other audiovisual devices were demonstrated. It was explained that the small primitive western mobile phones are not acceptable in Japan, where larger phones permit larger screens that provide your position on a detailed color map, internet content in detail and other delights, including the ability to purchase things with the phone even when it is switched off.
The phone acts as both RFID reader and RFID tag using Sony Felica protocol backwards compatible into the newer global Near Field Communication NFC ISO standard devices also pioneered by Sony.
Delegates even got to handle the digital cameras used to film the Star Wars movies and see many precious artefacts from Spiderman and other movies because Sony, uniquely, is an electronics manufacturer that controls content - it owns Columbia Pictures. However, in e-readers, with their electrophoretic displays, it has a strong rival in Amazon, which controls the leading route to market for books. One way or another, it seems that publishers and movie studios must modernise into this new paradigm led by companies such as Sony - or die.
Delegates also saw the new Organic Light Emitting Diode OLED TV. Sony established a milestone with the introduction of the industry's first OLED television, the XEL-1. This 11" diagonal desktop color television is just the first step Sony is taking in the world of OLED televisions.
Sony says, "Larger screen sizes and higher native resolutions are possible. As substrates get thinner, the displays will in turn get thinner. There are a variety of other uses for OLED technology. In fact, Sony has developed a new application for OLED technology called Organic Thin Film Transistor (TFT). The newly developed Organic TFT can be deposited on a flexible plastic display, which is the world's first full-color display that can project full color moving images even when the display is bent."
The visit ended with a presentation on the Sony OTFT and electrophoretic display (EPD) developments. The experimental EPDs are driven by the Sony OTFTs made by a combination of inkjet, capillary coater and - for passivation - offset screen printing. Collaborators are E Ink, Toppan Printing and two universities.
Sony is also researching Dye Sensitised Solar Cells (DSSC) because it is interested in indoor applications of solar cells. In standard vertical sunshine, DSSC is not the most impressive technology in efficiency or life but with low levels of light, polarised light, narrow angles of light and use of heat it can promise the highest efficiency and lowest cost per watt.

The next imposing skyscraper to be visited was the headquarters of Toppan Forms, the multi billion dollar subsidiary of the $13 billion Toppan Printing which has over 6600 employees. 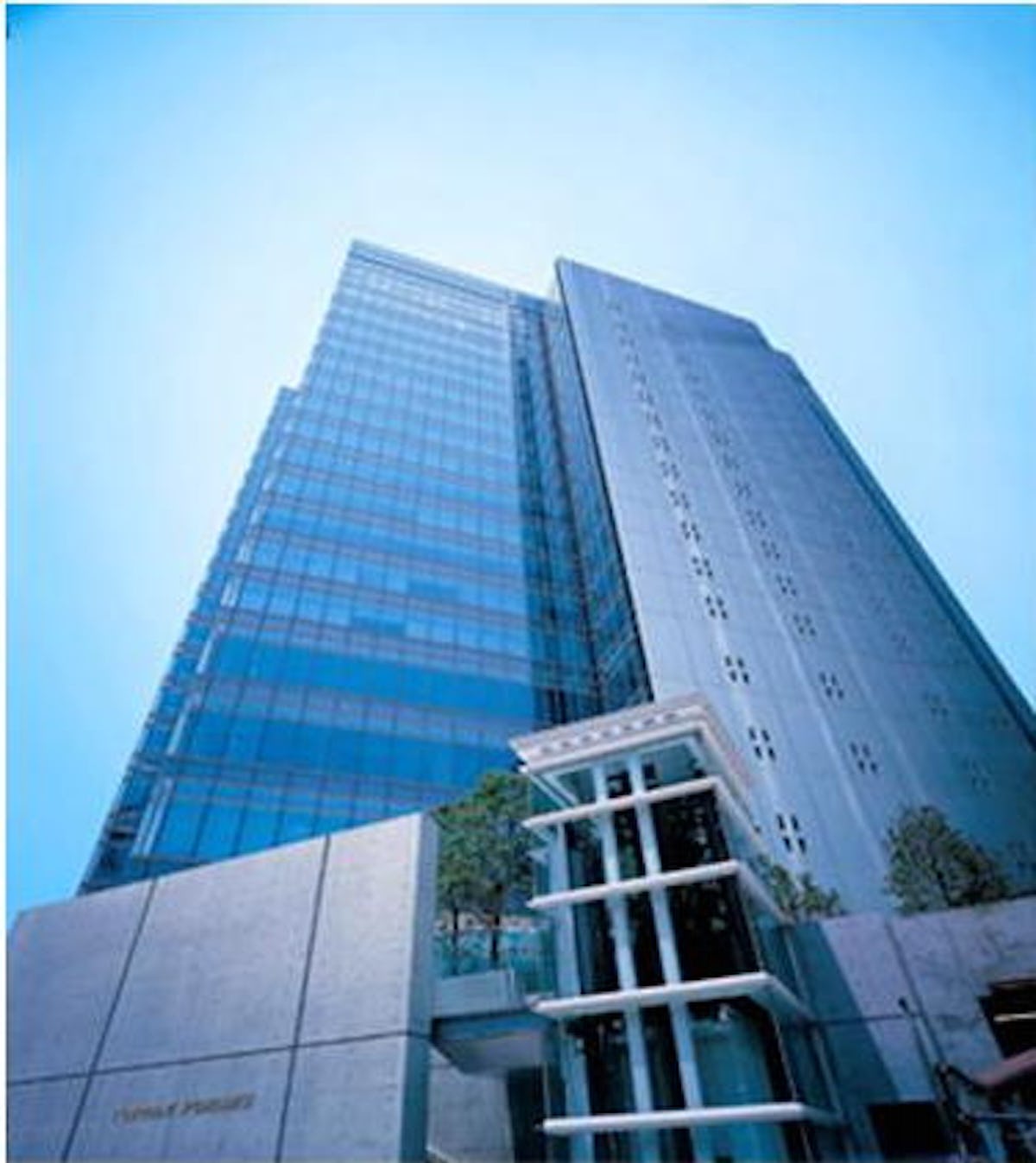 Source: Toppan Forms
Toppan Forms Co., Ltd. is Japan's largest producer of business forms and related systems. It is the leader in the Data Print Service sector, in which the company does everything from processing client data to printing and mailing it. Toppan Forms' large customer base is increasingly turning to the company to provide once purely paper-based business solutions electronically and online. In addition to business forms and related services, Toppan Forms provides cards, including IC cards, and card-related equipment, computer systems management services and office supplies. 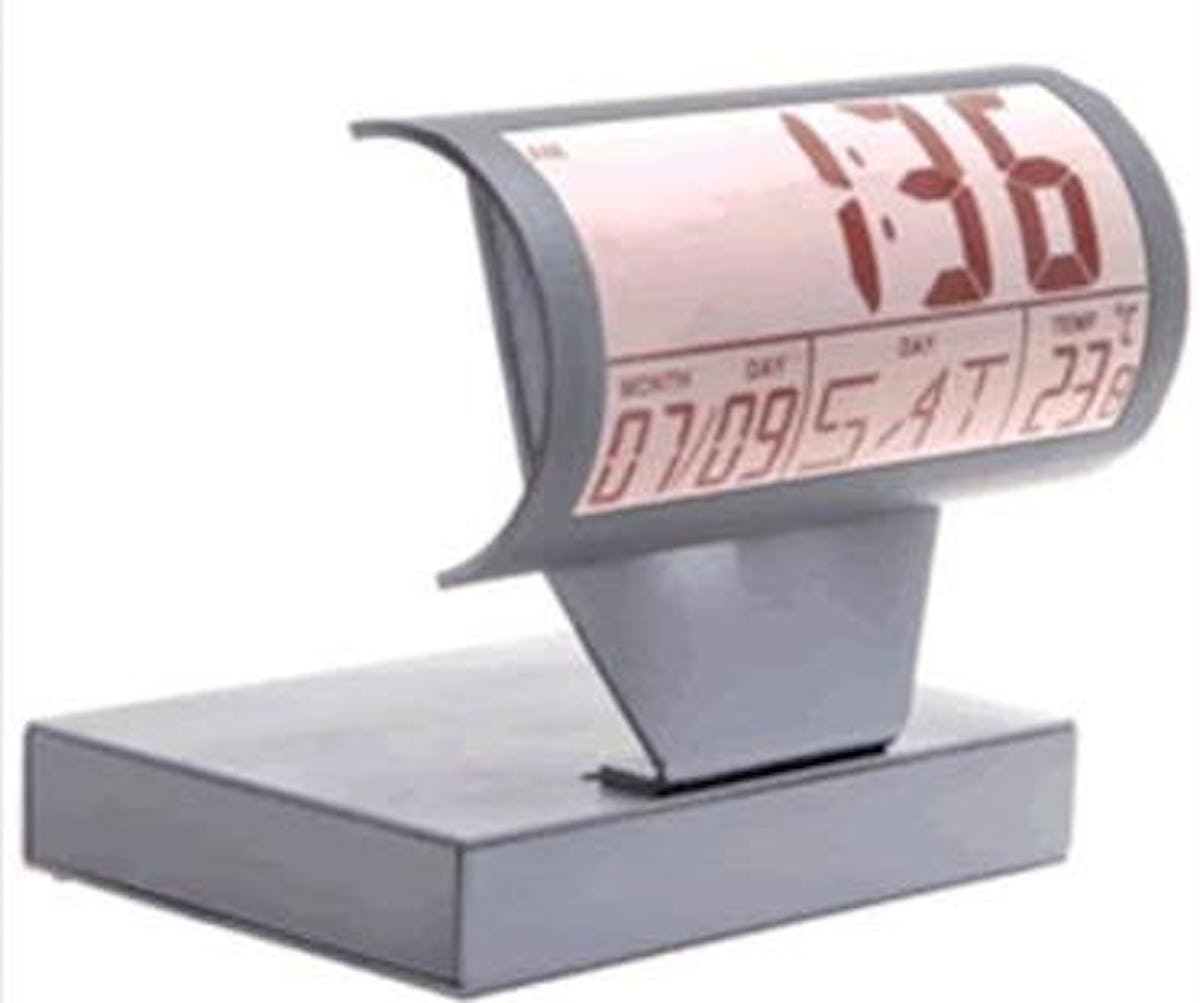 Today, its primary products include: 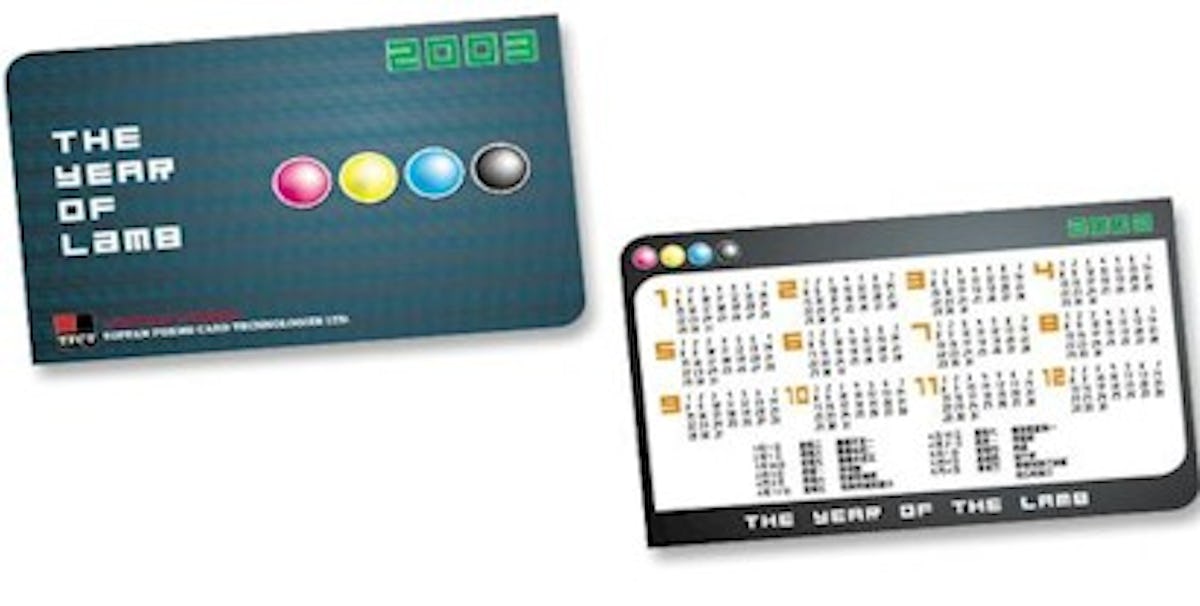 Host was renowned authority Mitchell "Mitch" Shinozaki who gave a visionary slide show and let delegates experience the shop of the future where apparel and other items are tagged with increasingly printed RFID at HF, not the UHF popular for apparel in the West. This meant that NFC mobile phones could be used to buy things and a magic mirror was also demonstrated that recommended accessories after sensing the tag on the apparel.
Toppan Forms collaborates with the University of Osaka on truly nano silver printed electrodes for devices printed onto paper and plastic film. Some electrodes for its Latica range of UHF tags may be printed in silver but the HF tags are made by other methods so far. Toppan Forms has a clear mission to expand into the electronic form of the future, associated data management and many new concepts involving printed electronics to make the shop, subway, office and airport of the future a reality.
Toppan Forms has put SiPix electrophoretic display technology into production. The company has smart cards with electrophoretic displays to give value remaining or one time password generation. In paper or paper-like form, it has, for example, an electronic calendar, an electronic map, electronic shelf edge labels and electronic paper that records and plays back - now having success in promotions.
All this leads this very impressive company rapidlt progressing from being purely a manufacturing business to acting as a total solutions provider.
If you missed this event then attend Printed Electronics USA 2008 or Printed Electronics Europe 2009.