An invisible cloak may be 5 years away using transformation optics

An electromagnetic cloak that could bend light around itself, similar to the flow of water around a stone, making invisible both the cloak and an object hidden inside as seen in the Harry Potter movies may be possible in five years believe scientists at Purdue University.
The new research called transformation optics may bring advances by harnessing nanotechnology and metamaterials that could bring us computers and consumer electronics that use light instead of electronic signals to process information; a "planar hyperlens" that could make optical microscopes 10 times more powerful and able to see objects as small as DNA; advanced sensors; and more efficient solar collectors. 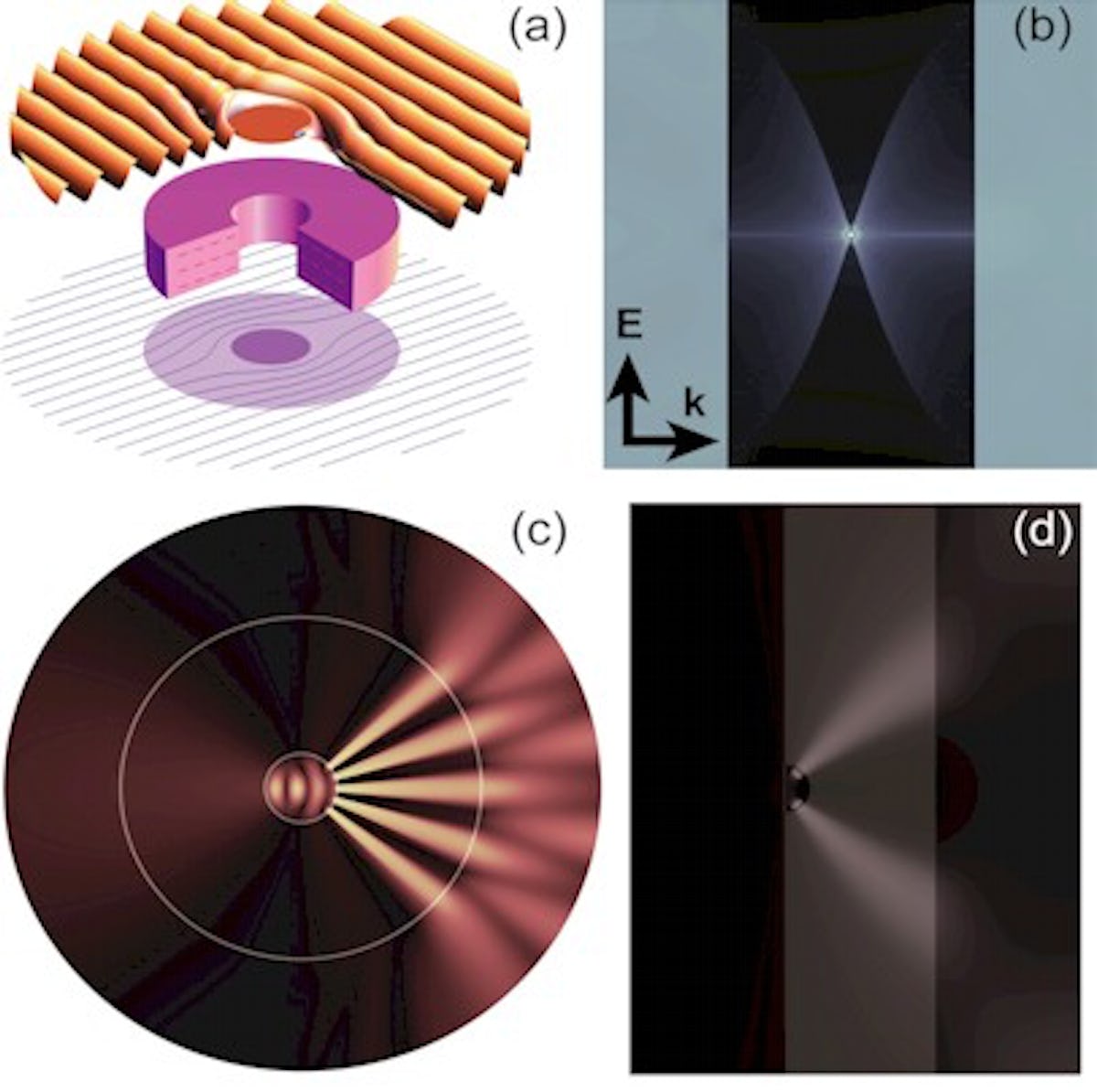 These are graphical representations of numerical simulations depicting four potential applications of a new field called transformation optics. Clockwise from top left are: a design for optical cloaking; a light "concentrator" for sensors and solar collectors; a "planar hyperlens" and "impedence-matched hyperlens" for applications including microscopes. (Courtesy of the journal Science)
"Transformation optics is a new way of manipulating and controlling light at all distances, from the macro- to the nanoscale, and it represents a new paradigm for the science of light," Vladimir Shalaev, Purdue's Robert and Anne Burnett Professor of Electrical and Computer Engineering said. "Although there were early works that helped to develop the basis for transformation optics, the field was only recently established thanks in part to papers by Sir John Pendry at the Imperial College, London, and Ulf Leonhardt at the University of St. Andrews in Scotland and their co-workers."
The aim of metamaterials is to create materials designed and engineered out of artificial atoms, meta-atoms, which are smaller than the wavelengths of light itself the researchers say.
Current optical technologies are limited because, for the efficient control of light, components cannot be smaller than the size of the wavelengths of light. Transformation optics sidesteps this limitation using a new class of materials, or metamaterials, which are able to guide and control light on all scales, including the scale of nanometers, or billionths of a meter.
Shalaev and his team in 2007 took a step toward creating an optical cloaking device in the visible range of the spectrum. Their theoretical design used an array of tiny needles radiating outward from a central spoke, resembling a round hairbrush, and would bend light around the object being cloaked.
The mathematical equations for transformation optics are similar to the mathematics behind Einstein's theory of general relativity which describes how gravity warps space and time - whereas relativity demonstrates the curved nature of space and time, the team were able to curve space for light, and are able to design and engineer tiny devices to do this reported the researchers.
Shalaev says "In addition to curving light around an object to render it invisible, you could do just the opposite - concentrate light in an area, which might be used for collecting sunlight in solar energy applications. So, general relativity may find practical use in a number of novel optical devices based on transformation optics."
The technology for faster computer chips is reaching its limits but the university claim that computers using light instead of electronic signals to process information would be thousands of times faster than conventional computers. Such "photonic" computers would contain special transistor-size optical elements made from metamaterials.
But the scientists are most excited by transformation optics that could enable engineers to design and build a "planar magnifying hyperlens" that would drastically improve the power and resolution of light microscopes making things appear 10 times smaller than possible now - enabling you to see molecules like DNA, viruses and other objects too small to see.
They described how the hyperlens theoretically would compensate for the loss of a portion of the light transmitting fine details of an image as it passes through a lens. Lenses and imaging systems could be improved if this lost light, which scientists call "evanescent light," could be restored. Such a hyperlens would both magnify an image and convert this evanescent light so that it does not weaken with distance but continues to propagate.
Unlike natural materials, metamaterials are able to reduce the "index of refraction" to less than one or less than zero. Refraction occurs as electromagnetic waves, including light, bend when passing from one material into another. It causes the bent-stick-in-water effect, which occurs when a stick placed in a glass of water appears bent when viewed from the outside. Each material has its own refraction index, which describes how much light will bend in that particular material and defines how much the speed of light slows down while passing through a material.
"Natural materials typically have refractive indices greater than one. Metamaterials, however, can make the index of refraction vary from zero to one, which possibly will enable cloaking as well as other advances," Shalaev said. He estimated that researchers may be building prototypes using transformation optics, such as the first planar hyperlenses, within five years.
The U.S. Office of Naval Research and Department of Defense are creating a new multidisciplinary university research initiative, or MURI, to fund work in the field of transformation optics. MURIs are collaborative efforts among researchers at several universities, but the participants have not yet been selected.
Shalaev's research is based at the Birck Nanotechnology Center at Purdue's Discovery Park. The research is funded by the U.S. Army Research Office.
For more attend Printed Electronics USA 2008. Also read Metamaterials: Printing the cloak of invisibility, Invisible electronics and Invisibility by smart fabric video.
Reference: Purdue University