IDTechEx has just issued a report on the hot topic of Wireless Sensor Networks WSN, also known as Ubiquitous Sensor Networks USN. The report is called Wireless Sensor Networks.
The dream is to automatically monitor and respond to forest fires, avalanches, hurricanes, even the smallest faults in country wide utility equipment, traffic, hospitals and much more with billions of sensors over wide areas, something previously impossible. Starting with more humble uses such as meter reading in buildings - the first killer application - WSN will grow rapidly to become a $1.75 billion market in 2019.
For technical reasons, it will be rare for a WSN system to have more than 50,000 sensors in the next ten years but after that the dream of far larger deployments will be realisable, particularly as we progress from the sensors being printed today to the logic and antennas being printed. So what is a WSN?
One of the foundations of the next generation of computing is the idea that the physical world can be modelled, monitored, and then represented virtually by computers, most of which are invisible to the public because they are embedded and require almost no human intervention. A WSN of self-organizing, extremely small, locally powered, wireless sensors are a fundamental part of this vision. Indeed, when formed in so-called mesh networks, these WSN nodes are self-forming - put them in the range of the network and they automatically join - and they are self healing - they find a way to signal around any failed nodes because the mesh of communicating nodes allows multipath hopping of the signals in and out of the network. To that extent they work like the internet but whereas the internet has TCP/IP as the standard transport protocol, WSN do not yet have a common stack on which all applications are implemented.
WSN are easy to install. Thanks to mesh networking, they are exceptionally scalable - deployment of more and more nodes in a system is relatively easy - and they are responsive to their environment. They are designed to provide information of great integrity and usefulness from large numbers of imperfect, low cost nodes infrequently sending and receiving modest amounts of information to each other over modest distances, many short ranges adding up to long range. Sophisticated software and firmware and large numbers of affordable nodes are key - the opposite of traditional RFID and wireless sensing.
WSN are increasingly affordable. The nodes can even be reconfigured remotely to perform a different task. Some refer to WSN as third generation RFID but RFID is already a business of more than $5 billion, so why have WSN sales been so slow to take off? One problem is power. Some nodes (tags) have batteries go down in only two weeks and others lasting two months are a problem. Larger batteries than those common in conventional RFID can be used to give a more conventional 3-10 years life but that is not enough to let them be embedded for life, as is desired in some applications. Energy harvesting and better batteries are therefore being tried.
In many envisaged applications, billions and even hundreds of billions of nodes need to be deployed but the favourite protocol ZigBee is limited to about 65,000 nodes at present and it is rarely economic to deploy more than thousands at current node prices. Therefore new protocols are being developed and printed sensors - and ultimately everything printed - should get node price down. Other technical limitations are also being tackled. Meanwhile, consider WSN as a third generation form of RFID that involves an unusual amount of memory and processing power at the node to perform tasks that earlier forms of RFID cannot address.
WSN beats the wired alternative with 90% reduction in cost, even at current prices and often WSN enables things to be done that are otherwise impossible. Little wonder that hundreds of research centers are pursuing the subject and there are already over 100 suppliers of this or that part of the jigsaw puzzle. One table in the new report compares 141 organisations involved.

An early objective for most schemes is wireless replacing all or almost all wiring, not just power and not just control. For instance, Niek Van Dierdonck, former vice president of strategy and product management at GreenPeak says, "We have developed an ultralow-power strategy because the strength of a truly wireless sensor network can only be fully utilized when the wiring for both the data communications and power cables can be eliminated. Eliminating the data cable solves only half the problem: The installer still needs to run a power wire and half a problem solved is as good as not solving it at all." Yet WSN have highly constrained resources such as processing, storage, bandwidth and power, so it does have its own problems.
These unique attributes are essential for the embedded, invisible computing of the future. In the form of WSN, it can assist with most of the big issues of this century including security, safety, protecting the environment, animal and plant conservation, healthcare and efficient food production for example. Meanwhile, 99% of sensors installed in the world are still wired and, over the next ten years, WSN will use no more than ten percent of the wireless sensors that are sold. Mainly because of technical challenges, progress with WSN has been slow though things are now hotting up, even though projects with over 100,000 nodes will not be commonplace until the second decade from now.

What is a mesh network?

So what is a mesh network? Think of the electronic equivalent of party guests passing on the message that a child is missing until that child is found - many short range communications, in many directions - like a mesh - add up to finding the child further away. All those people were able to pass on a message in an ad hoc network that dissolved when its task is done. In the electronic equivalent, WSN can form ad hoc networks where many small ranges add up to a big one thus permitting the tags to be much smaller, lower cost and more reliable than would otherwise be the case. However, here the network operates without human intervention.
However, there are challenges. In World War 1 it was said that the verbal message "Send reinforcements. We are going to advance." was corrupted as it was passed back through the lines so, when it reached its destination, it had become, "Send three and four pence. We are going to a dance." The same can happen with electronic messages but better software reduces the errors and tries to fill in the missing parts.
A basic wireless mesh network is shown below. WSN tags are more commonly called nodes or motes.
Basic wireless mesh network 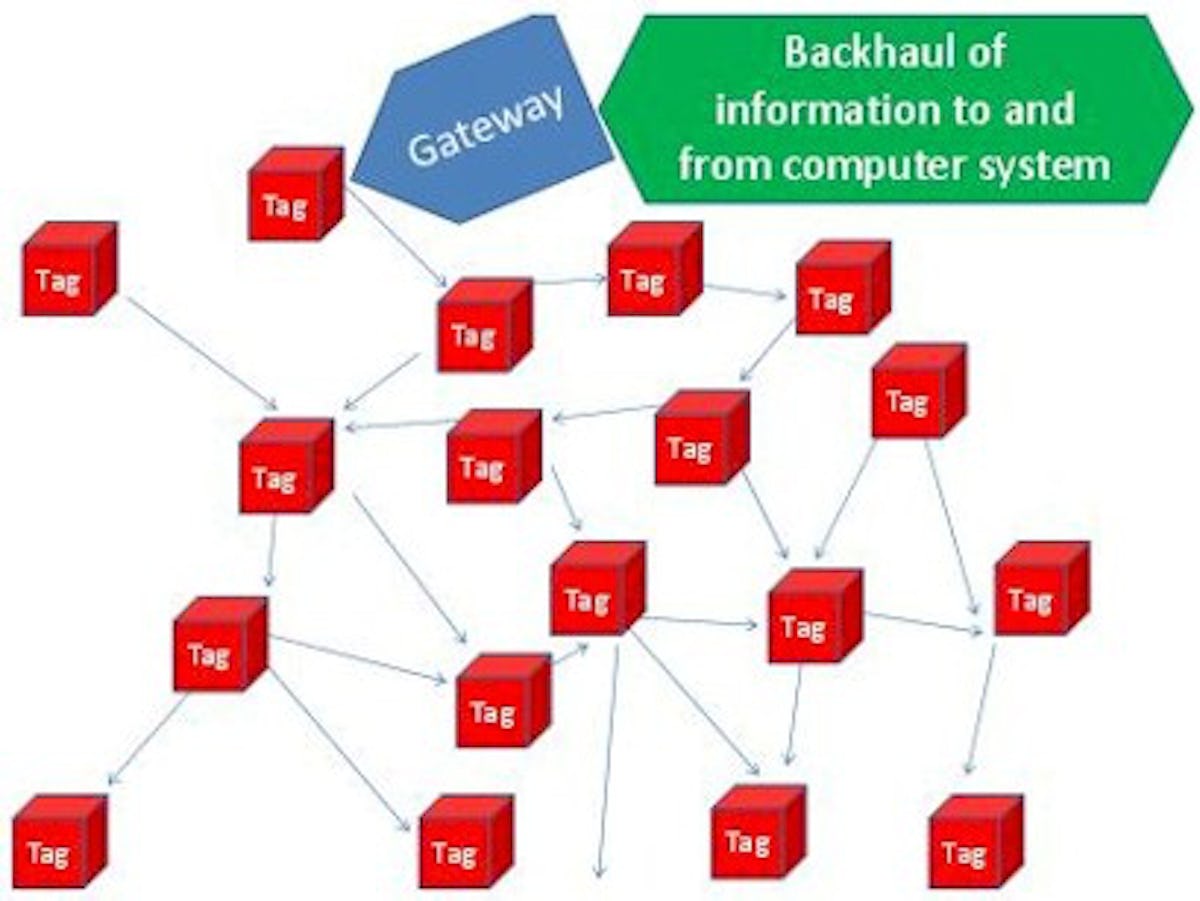