Most wireless sensor networks use wireless mesh technology based on IEEE 802.15.4, sometimes referred to as ZigBee. The ZigBee Alliance, a broad-based industry group with over 250 members, functions in the WSN world much as the Wi-Fi Alliance does in relation to 802.11. However, ZigBee is used for more than WSN and many developers now have proprietary protocols aimed more directly at the needs of extensive WSN.

How to make a WSN node

A WSN is made up of a group of sensor nodes otherwise known as tags or motes in this mesh network. Any node can send and receive to any other node provided it is in range. Each sensor node can monitor some aspect of its environment, and each is able to communicate its observations through other nodes to a destination where data from the network is gathered and processed.
WSNs are wireless mesh networks that link tiny devices that contain a wireless transceiver, a communication protocol handler, a microprocessor which is often application specific to contain cost and has appropriate firmware and read only ROM as well as random access memory RAM, an on board power source which is usually a battery, and at least one sensor for measuring anything from temperature to humidity to motion, and/or an actuator. The node may also have a human interface such as a display with driver. When the whole system is on one chip it is called System on Chip SOC. Ember Corporation was the first to do this for WSN and it remains one of the most respected suppliers of WSN chipsets.

Recent developments in wireless technologies and the semiconductor fabrication of miniature sensors and electronic circuits are making WSN smaller and more cost-effective for an increasing number of uses. However, the very low cost, very small, long lived node needed for most of the largest deployments remains elusive - and basic ZigBee can only cope with up to 65,000 nodes in one system.
The first applicational priority is therefore industrial where these limitations are not too much of a problem. In many of these applications, small node size and even low cost are not among the most important priorities because the alternative of hard wiring a system is massively expensive and disruptive and, for mobile systems and those in hostile environments, often impractical. Instead, ease of use, the capability to provide a complete solution and vendor support are the primary considerations. The cost is still typically one tenth of the cost of a hard wired alternative. However, often lives are at stake and there is no alternative to a WSN. Then, the payback is usually not calculable but considerable funds are still made available.

Progress is now rapid and the size of the latest USN nodes is one indication of this. While the original concept was for billions or even trillions of tags the size of dust, the first ten years of development of USN has more often seen nodes the size of a videotape or, more recently, palm sized. However, further miniaturisation and cost reduction are now imminent and useful WSN nodes the size of typical active RFID tags are now arriving, with attendant cost benefits as well.
Reducing the price and life of the nodes is key to the high volume applications as we can see in the context of other IT artefacts below. RFID involving chips -including WSN nodes as currently constructed - has potential of no more than tens of billions yearly at the achievable price points. For the volumes of hundreds of billions to trillions of WSN nodes in vast deployments, the technologies that do not involve silicon chips will have to be deployed, notably printed electronics.
Figure price and volume of IT devices 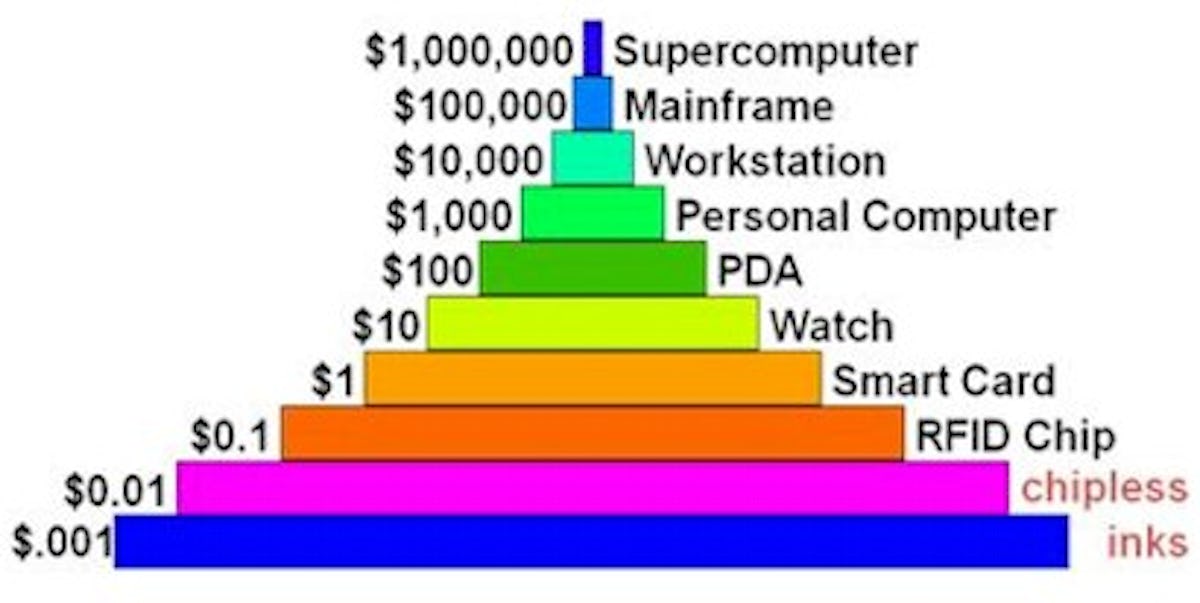 The term Wireless Sensor Systems WSS tends to be applied to more primitive wireless control of sensors as well as the mesh networking option that is the subject of this report. The WSS market is multi-billion dollar already and is not the subject of this report, which is about the WSN part of that market.
Read Wireless Sensor Networks 2009-2019.
Also attend Printed Electronics USA 2008 and Active RFID, RTLS & Sensor Networks 2008.