Coin cells, otherwise known as button batteries, are a huge success. Whether it is for 100 million talking gift cards or 50 million car key remotes every year, the choice is coin cells. They are the favoured power source for active RFID tags, hearing aids, wristwatches, calculators and a great deal besides. Even where a thinner battery is needed and footprint is not a constraint, the choice is usually coin cells not the laminar batteries made by an increasing number of businesses. Because their products can cost ten times as much as coin cells, the laminar batteries are usually having success only where the need for thinness and flexibility is extreme. An example of this is the Estee Lauder smart skin patch which delivers cosmetics through the skin using the iontophoretic effect. 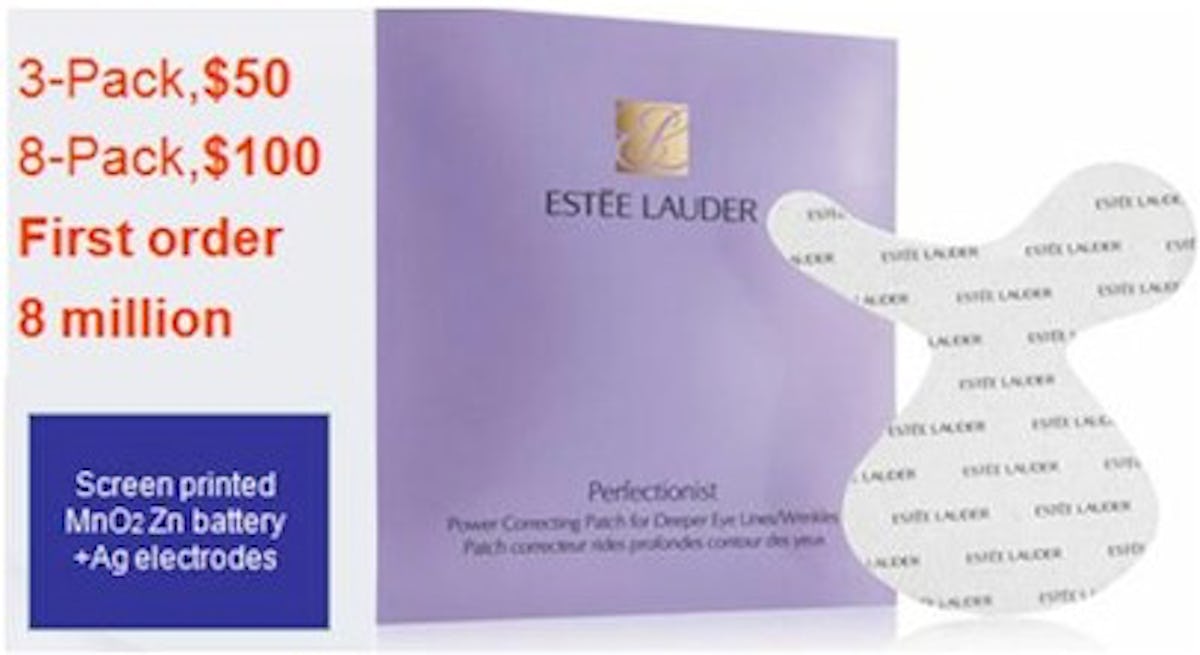 The design consists of a Power Paper manganese zinc oxide battery and some printed electrodes, the patch being soaked in the cosmetic. A button battery would be very uncomfortable here and there are sufficient funds for the printed alternative because the benefits to the user justify considerable premium pricing. Indeed, several smart skin patches are about to be announced for both drugs andcosmeticsthat incorporate printed batteries. Power Paper no longer has the field to itself.
Questions remain however. The billions a year coin cell market is there for the taking. In most cases their applications are where a thinner battery would be valued and often flexibility as well. However, in only a few cases can this command a price premium.
For example, the Toppan Forms Audio Paper TM,, which employs a laminar battery and complete recording and playback circuit in thin card, has been a failure for gift cards because of cost but at around $10 per sheet, it is now selling well, in more modest volumes, for promotions.
To tackle the coin cell market, those making laminar batteries need to do two things in particular that the coin cell people did years ago. Firstly, they should take high volume orders even at a loss so they can get economy of scale and get down the experience curve. Secondly they must standardise at least the shape and contacts. An elegant set of standards would use the publishing " A" size standards already being used in some sheet production of printed electronics and finished laminar electronic products. For example, e-books have limited success at A5 but A4 ones are now appearing.
These will be a huge success because that will be compatible with most of the paper that business people handle across most of the world and the associated folders, bags and so on that are already out there. Batteries to go with this new electronics should be standard at A8 and so on. To new standard specifications for performance, they will "steal the clothes" of coin cells by becoming affordable, interchangeable and multiply sourced. The e-book (or e-label, e-package, e-poster or whatever) would have a standard space for the battery. Volumes of billions a year would certainly result from this general approach to new electronic products.
So who is pursuing this? In our interviews, most laminar battery people are sticking with the customised specialty, higher priced products. Blue Spark is one company that says it is definitely not trying to compete with coin cells at this time. Indeed, Gary Johnson CEO points out that first priority in standards should be test methods because even the life of a battery is measured differently between companies. He uses the time when power is down to 70%. What a far cry from photovoltaics where everyone accepts the National Renewable Energy Laboratory in the USA as global referee in comparing performances and reproducing experiments.
Gary accepts that there is a market for laminar cells in standard shapes and perhaps to standard performance. There is also a market for heavily customised designs and, to that, he adds a market where the very high volume product manufacturers make the batteries under license as part of their production line, the whole being integrated in one go. Dr John Heitzinger of Soligie certainly sees scope for standard laminar batteries and Makku Paukku President of Enfucell says, "I think it is a great idea" but he cautions that there will probably need to be different standards for performance of lithium vs manganese dioxide zinc cells. IDTechEx nevertheless feels that standards for footprint and thickness could be the same for both technologies.
Planar Energy Devices, with its lithium laminar batteries of unusually high capacity, tells us it is working towards industry standards. In addition, the company intends to make the first truly printed lithium batteries.
Printing is the norm for the lower cost, lower capacity manganese dioxide zinc batteries but not for lithium, though Leeds Lithium Power makes them reel to reel.
IDTechEx believes that there is scope for a large company to buy a few of these smaller players and finance a move to the big opportunity for replacing almost all coin cells with laminar cells more compatible with the planned ultra thin e-book, e-magazines and most other electronic products of the future. Maybe forming a captive ISO specification, where anyone can participate, but all pay royalties to one supplier, would be a part of that. A billion dollar opportunity perhaps?
These interviews were carried out at Printed Electronics USA 3-4 December 2008.
For more attend Printed Electronics Europe 2009.
Also read Printed and Thin Film Photovoltaics and Batteries and Inorganic and Composite Printed Electronics 2008-2018.