Harry Potter's video newspaper may be a few steps closer to reality for us "Muggles" who would like access to a staple of the wizard world, with a new development in high performance transparent electronics that could be used in cheap flexible displays that allow for full motion video.
A colourless disk slightly bigger than a CD, with a lattice of more than 20,000 nanotube transistors capable of high performance electronics printed upon it using a potentially inexpensive low-temperature process can bend and twist just like a playing card.
The University of Southern California Viterbi School of Engineering, one of many groups around the world trying to perfect the technology believe the prototype could be used in applications such as affordable "head-up" car windshield displays; used in eyeglasses to watch videos for when you are sitting in an airport or train station and used to create cheap, ultra thin, low-power "e-paper" displays with full colour motion video.
They could even be incorporated into packaging with product information displayed beneath the transparent electronics or into fabric that would change color or pattern as desired for clothing or even wall covering, into nametags, signage and other applications.
The researchers not only created printed circuit lattices of nanotube-based transistors to the transparent plastic but also additionally connected them to commercial gallium nitride (GaN) light-emitting diodes, which change their luminosity by a factor of 1,000 as they are energized.
The thin transparent thin-film transistor technology developed employs carbon nanotubes - tubes with walls one carbon atom thick - as the active channels for the circuits, controlled by iridium-tin oxide electrodes which function as sources, gates and drains.
Chongwu Zhou of the School's Ming Hsieh Department of Electrical Engineering has been working on transparent electronics for the past three years and reported last year on prototype devices in which transparent electronics were built on top of a flexible transparent base. He is the principal investigator for both pieces of these reported works. He explained to Printed Electronics World "Previously we used indium oxide nanowires as the active materials for transparent transistors. In the current paper, our innovation is to use massive aligned nanotubes, and we observed better performance (in terms of higher carrier mobility ~1,300 cm2V-1s-1) than before."
Earlier attempts at transparent devices used other semiconductor materials with disappointing electronic results, enabling one kind of transistor (n-type); but not p-types; both types are needed for most applications.
The critical improvement in performance, according to the research, came from the ability to produce extremely dense, highly patterned lattices of nanotubes, rather than random tangles and clumps of the material.
Zhou continued "The devices are made by first growing aligned nanotubes on quartz which are then transferred to transparent glass or polymer substrates with prepatterned gate electrodes, followed by patterning of transparent source and drain electrodes. This way all components of the transistors are transparent to visible light." 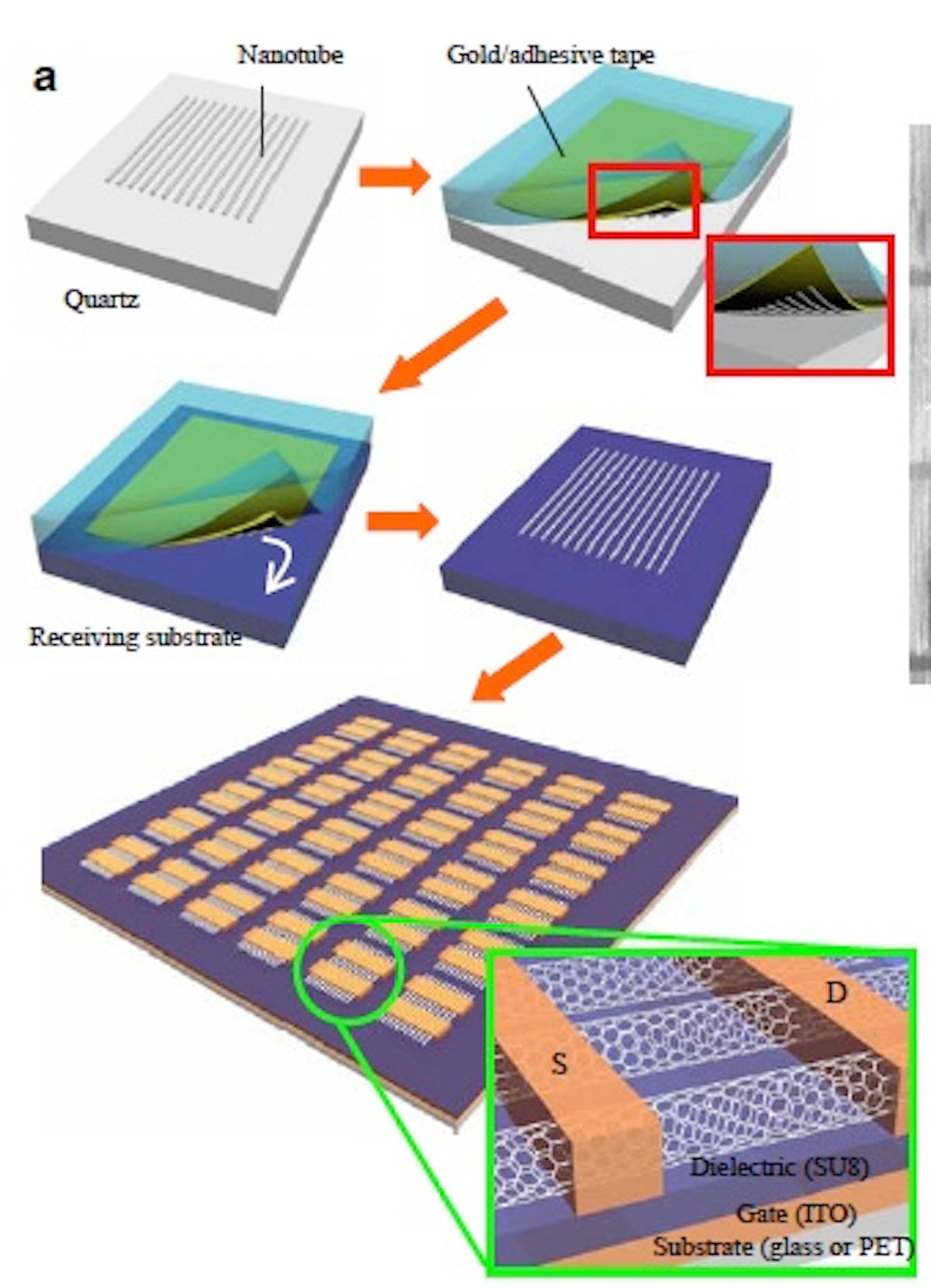 Fabrication steps, leading to regular arrays of single-wall nanotubes (bottom).
These new aligned nanotube transistors are easy to fabricate and integrate, as compared to individual nanotube devices. The transfer printing process allows the devices to be fabricated through low temperature processes, which is important for realizing transparent electronics on flexible substrates. 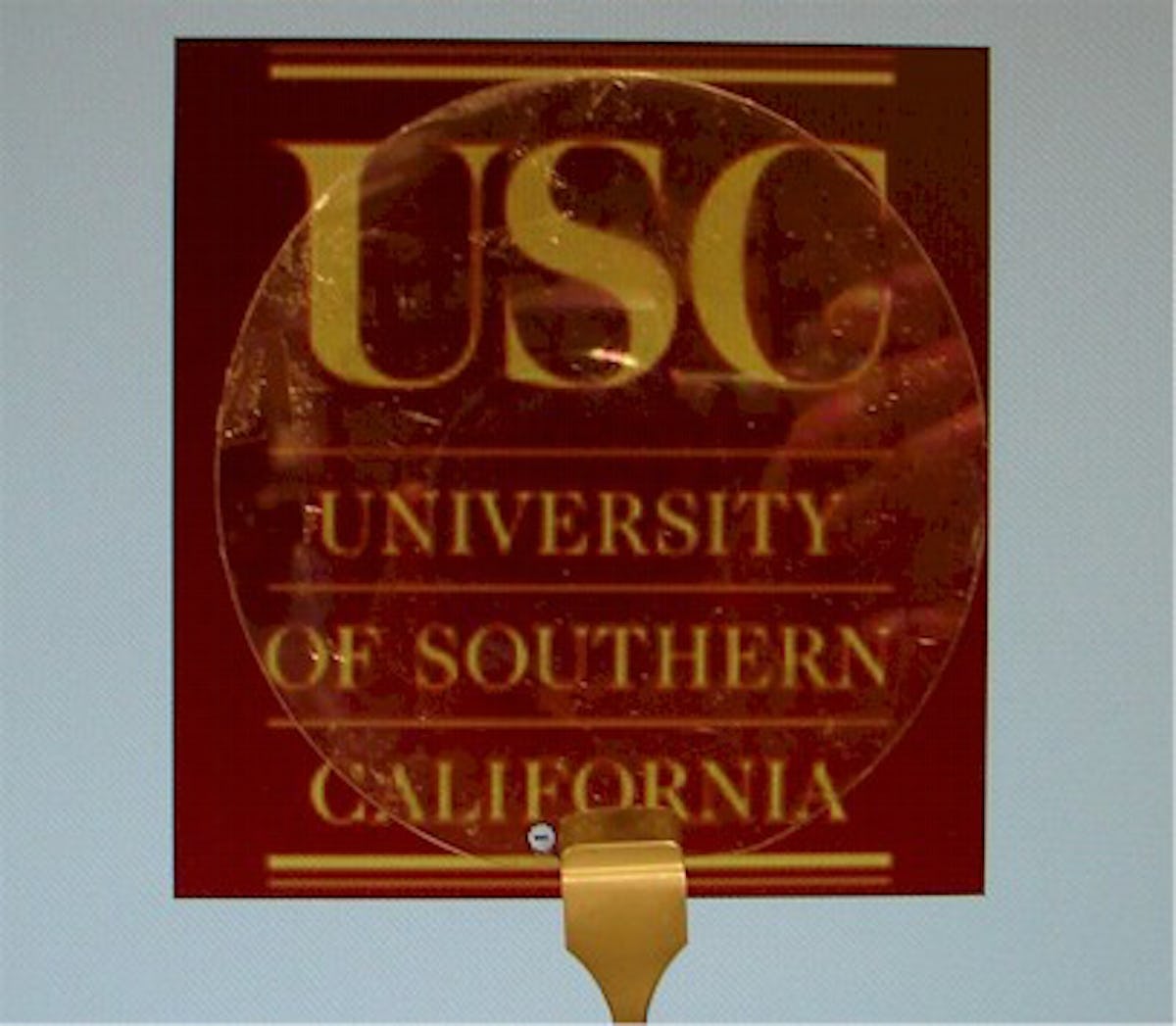 A researcher holds the colourless disk with a lattice of more than 20,000 nanotube transistors in front of the USC sign.
Zhou believes that we may be 5 to 10 years away from mass production of transparent electronics. One barrier is the inertia of old existing technology.
A paper called "Transparent Electronics Based on Printed Aligned Nanotubes on Rigid and Flexible Structures" was recently published in the journal ACS Nano.
For more on printed electronics attend Printed Electronics Europe 2009.
Also read Printed and Thin Film Transistors and Memory 2008-2028.
Reference: USC
Source of images: USC