The hot applications for energy harvesting

Energy harvesting (EH) or scavenging is the use of ambient energy to provide electrical power for small electronic and electrical devices. The technologies employed variously convert human power, body fluids, heat differences, vibration or other movement, dirt, vegetation, ultraviolet, visible light or infrared to electricity. Most are in the laboratory and many are solutions looking for problems, yet practical applications of some harvesting technologies have been around for some time. They vary from the bicycle dynamo to the solar powered calculator or road sign. Proven solutions often store the energy usually either with a capacitor, as with some bicycles, or with a rechargeable battery as with some wind-up lanterns. However, certain wind-up radios manage this with clever clockwork that releases the energy at a required steady rate. We therefore have a considerable repertoire of energy harvesting technologies and uses today but there is a tsunami wave of new technologies and applications that they will be both affordable and usable in the next few years. A multi-billion dollar market awaits.
The emerging applications are analysed by sector in the new IDTechEx report, "Energy Harvesting and Storage for Electronic Devices 2009-2019" www.IDTechEx.com

. They include:
In all these applications there is now a delightful conjunction of progress by which new forms of lighting and electronics need far less electricity and new forms of energy harvesting are better able to provide it. They can meet in the middle in just a few years.
The Environmental Argument
Primarily, the environmental argument for energy harvesting is not saving power stations and their attendant pollution directly. After all, we define EH as powering small electronic devices not acting as a heavy power source for heating, motive power and so on. Information and communication technology (ICT) represent only two percent of the energy consumption in the world but they can lead to huge environmental savings if deployed more widely and appropriately to optimise heavy power creation and handling by utilities and others. Most notably, 38% of energy is consumed in buildings but it would be much less if electronic controls were cheaper and easier to install. More affordable building controls of longer life are the focus of most of the 70+ companies in the EnOcean energy harvesting alliance. For example, EnOcean, presenting at a recent event, described how they have installed 4200 wireless and battery-less light switches, occupancy sensors and daylight sensors in a new building construction in Madrid. These are powered by energy harvesters and embedded in the building. This saved 40% of lighting energy costs by automatically controlling the lighting in the building, 20 miles in cables, 42,000 batteries (over 25 years) and most of the cost of retrofitting. Batteries usually contain poisons, so the environmental benefits are wide ranging and substantial. Indeed EH is likely to replace many of the 30 billion button batteries sold yearly, many containing poisons. That will involve the exciting new laminar rechargeable batteries and supercapacitors for storage of the harvested energy and sometimes the electronics will accept the input from energy harvesting with no storage at all.
The primary motivations for use of energy harvesting, by type of device, are given below.
Table: Examples of the primary motivation to use energy harvesting by type of device 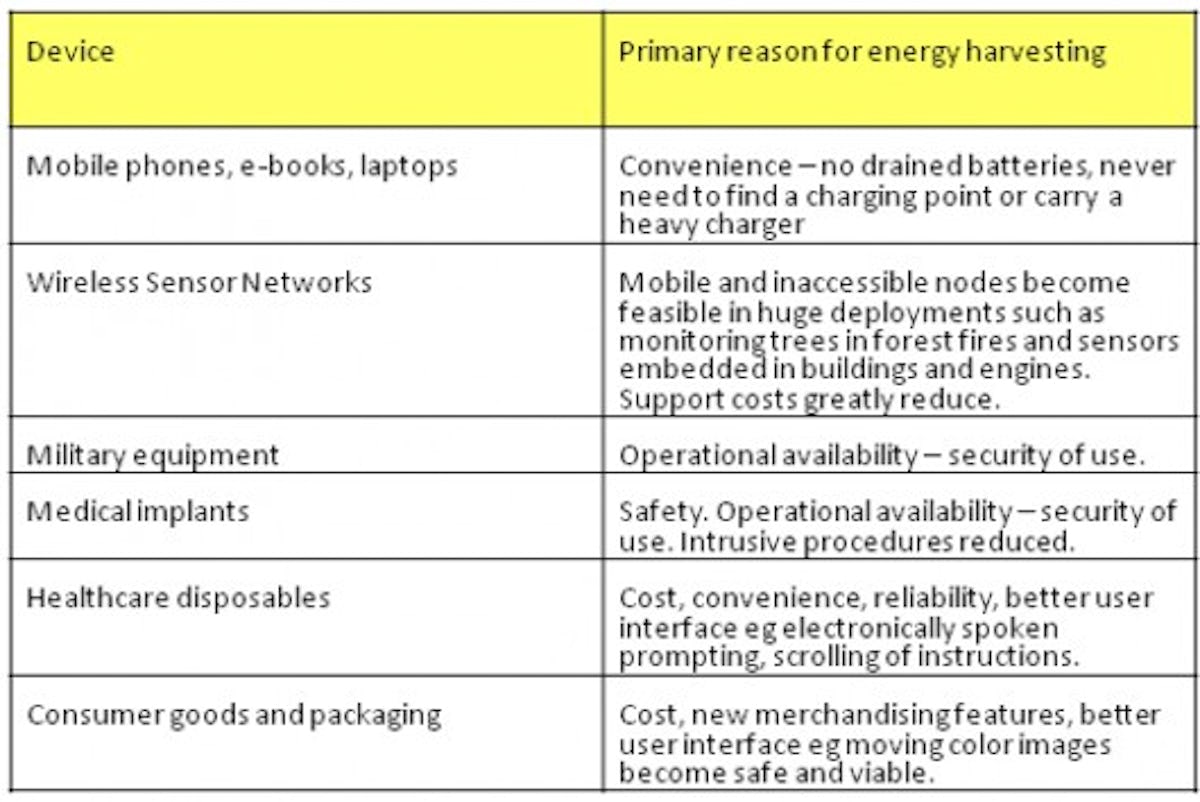 Source: IDTechEx report "Energy Harvesting and Storage for Electronic Devices 2009-2019"
IDTechEx finds that consumer applications are and will remain the greatest market for energy harvesting on small devices by value. However, industrial applications will grow fastest and will be at the billion dollar level in ten years. The segmentation by value projected for 2014, excluding bicycle dynamos and large space vehicles is shown below. In addition to military and third world applications, the Other category includes uses in farming and research for example.
Figure: Global market value of energy harvesting for small electronic and electrical devices in 2014.

Source: IDTechEx report "Energy Harvesting and Storage for Electronic Devices 2009-2019"
Prosperity correlates strongly with education and lighting. The "One Laptop Per Child" initiative of Massachusetts Institute of Technology and similar initiatives by Intel, the Vellore Institute in India, the Chinese Government and others target sub $100 laptops that are extremely rugged and employ energy harvesting - often several types of harvesting such as electrodynamics from human power and photovoltaics. Equally important are the projects seeking to create ubiquitous radio in the Third World such as the wind-up "Freeplay" versions originating in the UK and delivered through South Africa. The wind-up torches and lanterns already widely sold in the developed world typically employ batteries for storage and this limits their life to a few years. The more elegant Freeplay technology needs no battery and life may be as much as twenty years. Then there is ubiquitous lighting being sought by Harvard University with Lebônê Solutions in South Africa and backed by the World Bank and others.
Microbial Fuel Cells
Lebônê Solutions, Inc. is a social enterprise working in off-grid energy delivery and lighting technology. The mission of Lebônê is to help end the energy and lighting crisis in Africa by identifying and harnessing emerging technologies, developing and adapting them for the African market, and delivering them to rural villages in an innovative and accessible manner. The group was incubated under the tutelage of Professor David Edwards in the Harvard Idea Translation Lab. Lebônê plans to offer more holistic solutions to the pressing problems in developing countries.
One priority is Microbial Fuel Cells (MFCs) which capture energy produced by naturally occurring microbial metabolism. This can generate electricity from organic-rich materials such as soil, manure, or food scraps. By contrast, most renewable energy technologies are based on solar or wind power. Unlike these and other natural solutions for generating electricity, the team says MFCs are more reliable - working day or night, rain or shine - and are markedly less expensive.
Radical Change in the Consumer Market
So far, the market for energy harvesting in consumer goods has been largely confined to solar cells on calculators, wristwatches and the like, and dynamos on bicycles. That will now change radically thanks to a huge push to overcome the problem of mobile phones and laptops losing power. This is being aggravated by the trend towards more functionality such as incorporating cameras, video and quality sound and phones that emulate financial cards or project a video on the wall. Maybe all wristwatches, cameras, e-books, car keys and other mainstream mobile consumer electronics will adopt energy harvesting and certainly there is much work to create e-labels, e-packaging and electronic skin patches. Low cost energy harvesting has the potential to go way beyond the 60 billion conventional labels printed every year or the $430 billion conventional packaging industry. It can take a bite from the $3 trillion consumer goods industry as a whole. The very success of the button battery, with 30 billion sold yearly on some estimates, is leading to considerable expense and inconvenience in changing them and it is an environmental threat as well. There has to be a better way. Nevertheless, it is very challenging, so wait up to ten years for massive deployment of energy harvesting in disposable consumer goods.
IDTechEx has identified a desire in the industry to move from the technical niceties to commercialisation and market creation, including a close examination of what the potential users really want. In addition, investors and new entrants need to understand the potential and the progress so far. To serve these needs, it is staging a conference "Energy Harvesting and Storage" at Cambridge University in the UK on 3rd- 4th June with optional Masterclasses and visits to local centres of excellence on 2nd and 5th June. See www.IDTechEx.com/eh.
Top Image: Solar Energy Harvesting Sensor node. (Source: Centre for Embedded Networked Sensing)
For more attend: Energy Harvesting and Storage Europe 2009
Also read: Energy Harvesting and Storage for Electronic Devices 2009-2019

Join the Upcoming Webinar: Future of Hydrogels Beyond Medical
Top Technology Trends 2021 - with IDTechEx Insights
New Wearable Technology - For Plants
Engineers Get Under the Skin of Ionic Skin