In the first part of a two part article, Cathleen Macher, Technical Analyst at IDTechEx, looks at the global progress of carbon nanotubes (CNT). First discovered in the early 90's and now the focus of global research and development, carbon nanotubes are nanoscale materials that are highly attractive for electronic devices, energy storage devices, sensors and actuators. The attraction of CNTs comes as well from their small sizes as from their unique thermal and electrical properties.

CNTs consist either of only one graphite layer (single-walled carbon nanotubes, SWCNTs) or multiple ones (multi-walled carbon nanotubes, MWCNTs) rolled in on themselves forming a tube shape. They can range from less than a micrometer to several millimetres in length but are usually only a few nanometres wide, which is only a ten-thousandth the diameter of a human hair. The hollow, cylindrical tubes are composed entirely of carbon like the members of the fullerene family; graphenes are planar sheets and the famous "buckyballs" are spherical fullerenes of 60 carbon atoms.

The unique strength of CNTs arises from the chemical bonding of the carbon atoms similar to graphite and results in extraordinary resilience and stiffness in terms of tensile strength and elastic modulus. Especially single-walled carbon nanotubes are characterized by an excellent electrical conductivity. The potential of carbon nanotubes reaches into fields like biological sensors, transistors, field emitters and integrated circuits with demand for mass production, high speed and efficiency. However, the challenge lies in chemical complexity, reproducibility and purity regarding conductivity state, to name only some.

CNTs can either be metallic or semiconducting. The conducting state of SWCNTs depends on the chiral angle and diameter of the tube. Whereas having metallic or semiconducting properties of MWCNTs depends solely on the outermost shell. In the conductive state, the electrical current density can be more than 1,000 times greater than in metals like silver, at least in theory, and the conductivity exceeds those of conducting polymers. In practice, the reactivity of carbon nanotubes highly depends on several parameters, like structure, size distribution, agglomeration state, purity and others. Fabricated as transparent conductive films, they can be used as a highly conductive, transparent and cost efficient alternative to ITO (Indium tin oxide) for the use in flexible displays, for instance.
The coexistence of semiconducting and metallic CNTs after synthesis and the difficulty in separating them have significant limitations for the usage of carbon nanotubes in electronic applications. Several separation methods have been discovered over the last years - mostly complex, time-consuming and expensive.
Constant work on this matter already leads to increasingly cheap ways for CNT production. Earlier in 2009, DuPont and Cornell University presented a new and relatively simple process to separate metallic and semiconducting carbon nanotubes into a high-performance CNT 'ink' that solely contains semiconducting tubes. Funded by the U.S. Air Force this development is a highly promising approach towards printed, thin and flexible electronics for TFTs and Photovoltaics.
CNTs are impacting most aspects of printed electronics and below we give some of the latest progress.

Samsung Electronics recently demonstrated a color active matrix electrophoretic display e-paper using a transparent carbon nanotube electrode developed by Unidym. It was shown that the conductivity of the CNT electrode is comparable to ITO. The startup Unidym plans to sell rolls of its carbon-nanotube-coated plastic films in the second half of 2009 - as pictured. 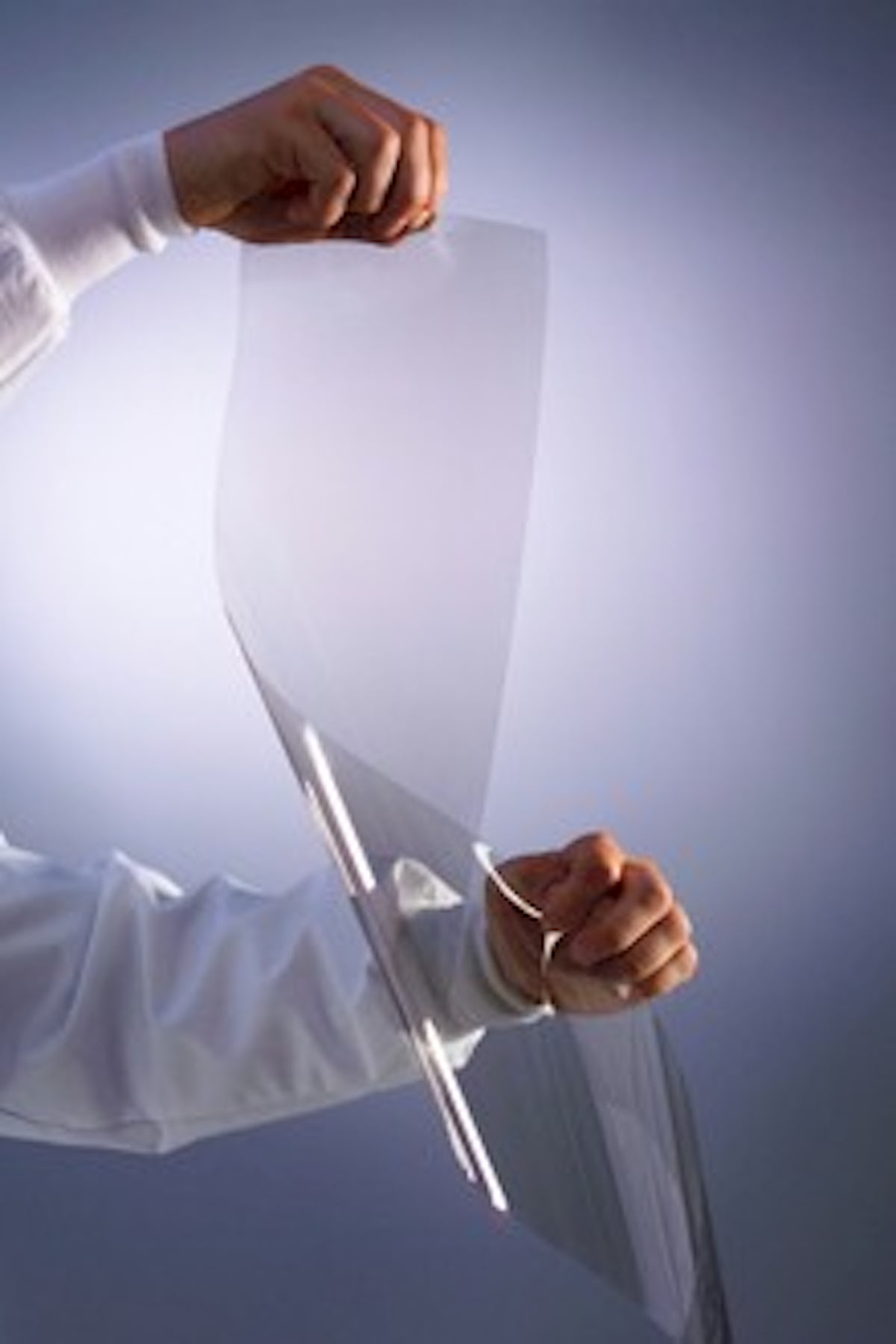 Nanotube shrink-wrap: A small sample of the carbon-nanotube-coated plastic film that could be used as the see-through electrodes in touch screens, roll-up displays, and thin-film solar cells. (Credit: Unidym.)

Applied Nanotech in collaboration with University of Stuttgart, Germany, found that printed thin-film transistors (TFTs) based on SWCNT can be used for flexible displays and electronics achieving results for mobility (100 cm²/Vs) and on/off ratio (105) that outperform organic semiconductors. Previous attempts in this direction were also made from the University of Maryland in 2005. Possible printing technologies are inkjet, microcontact printing or a spaying technique.

The potential use of CNTs for superbatteries and supercapacitors was shown by scientists at the Massachusetts Institute of Technology (MIT). Solution-based nanotubes were dispensed as pure, dense, thin films and employed as electrodes able to carry and store very high charge because of their nanoscale structure and large surface area. This is especially of interest for the use in supercapacitors.

A smart fabric using the conductive properties of carbon nanotubes was developed by scientists at the University of Michigan. Created by simply dipping cotton fibres into CNT containing water the threads conduct electricity and for example can be used to power a light emitting diode (LED).

A nanotube-based data storage device was developed by Nantero, Inc. In their high-density, non-volatile random access memory device (NRAM) CNTs are incorporated as molecular device elements and molecular wires for the read-write scheme.

Scientist of the Friedrich-Alexander University Erlangen-Nürnberg incorporated CNTs for organic photovoltaics (OPV) as an integrative part of the photoactive layer as well as for the construction of semitransparent and flexible hole collecting electrodes.
However, being a relatively new technology, CNTs are still quite expensive but, if cheap enough, could replace some organic semiconductors in the future and even surpass them. The second part of this article will explore the latest progress with CNTs in East Asia.
For more details and a list of the main developers and their activities, read Inorganic and Composite Printed Electronics 2009-2019 and Printed and Thin Film Transistors and Memory 2009-2029.
IDTechEx events cover all these topics: www.IDTechEx.com/peEurope.