CdTe Solar Cells - Can First Solar do anything wrong?

Two very recent announcements from First Solar have put the company in the spotlight once more. The announcement of their 2008 revenue which reached a stunning US$1.241 billion was one of them, while their second announcement related to their achievement of the milestone that the solar community has been striving for, reaching US$1/watt, which was achieved by the end of 2008 with costs of US$0.98/watt reached, a price drop of 66% since 2004, when their module cost was around US$3/watt.
It seems that First Solar is one of the few "well behaved" companies who are constantly making sure that they achieve their targets and reach milestones promptly and on schedule, which makes investors much less jumpy.
The company announced in August 2008 that they are on track to achieve their 2012 goal of 12% conversion efficiencies (an increase of approximately 0.5% per year, in Q1 2008 First Solar's average efficiency was 10.6%).
So, with such successes under their belt, with the cheapest manufacturing costs on the market, a robust manufacturing process and expanding capacities as the company's Malaysian plants are coming online, is there anyone who can challenge First Solar's supremacy in the field of thin film PV?
First Solar has managed to find itself in the enviable position of a market leader with the runner up being left far behind. The company has achieved its goals and has set trends in the industry that will shape and define the growth of the PV sector in the future. First Solar has achieved recognition as the "thin film solar company that could" when other companies struggle with challenges such as ramp ups, large scale production, transition from "lab to fab".
In the following paragraph, we are focusing on the following four companies that will be introducing their technology offerings into the market in the near future. Their technology is interesting, they have the monetary support as well as the scientific backing and they are trying to earn a share of the thin film market while shaking First Solar's monopoly on the sector.

CTF is a Kelkheim-based venture, which replaced Antec Solar and has just been acquired by Roth & Rau AG. The company, like First Solar, also uses a vacuum thin-film deposition technology byaporization in a high temperature process on a glass substrate. The deposited layers are scribed into small stripes by laser to form individual solar cells. CTF Solar's 50 MW manufacturing facility is currently being built and production is planned for 2010.

Calyxo Solar, a Q-cells company, has the backing of the biggest solar cell manufacturer in the world. Q-cells are placing bets in all thin film technologies (a-Si, CdTe, CIGS and microcrystalline silicon) and already 3MW of solar cells were produced in 2008. Calyxo has got quite a bit of ground to cover if the company wants to reach the market leaders as their 6% efficient solar technology severely underperforms when compared to First Solar.

In June 2008 GE became a majority shareholder in PrimeStar Solar, a company that holds proprietary technology that has reached a world record 16.5% efficiency for CdTe technology, which was developed at NREL. PrimeStar Solar's product will be a 60 cm x 120 cm frameless glass-glass photovoltaic (PV) module that is optimized for use in large scale grid connected installations. The company is still focused on its research and development efforts, with extensive co-operation and support from the National Renewable Energy Laboratory in Golden, Colorado.

AVA Solar, a CdTe module manufacturer located in Fort Collins, Colorado, in August it had completed its second institutional equity round of financing. This $104 million funding was be used to complete AVA Solar's first production facility in Longmont, Colorado, which will have the capacity to produce 200 megawatts of PV modules annually. The company says it can make 1 million modules per year and hopes to triple that if it can manage an expansion. Large scale production is projected to begin this year.

Although the world is in the midst of a severe economic crisis, the photovoltaics industry is still growing. Initiatives like the newly elected US government's stimulus bill with large incentives for renewable energies boosts optimism about the development and growth of the PV market. IDTechEx analysts see the CdTe sector growing to reach at least US$15 Billion by 2019, as shown in the following diagram. CdTe technology will be one of three thin film technologies prominent by then (the other two being a-Si and CIGS technologies). The achievement of thin film PV in terms of efficiency and cost/watt will lead to continuous growth until thin film technologies, rather than crystalline silicon, make up the largest segment of the industry. Limiting factors for CdTe technologies, other than competing technology development, could be fears in the use of Cd, which is toxic, and limitations on the amount of tellurium available. 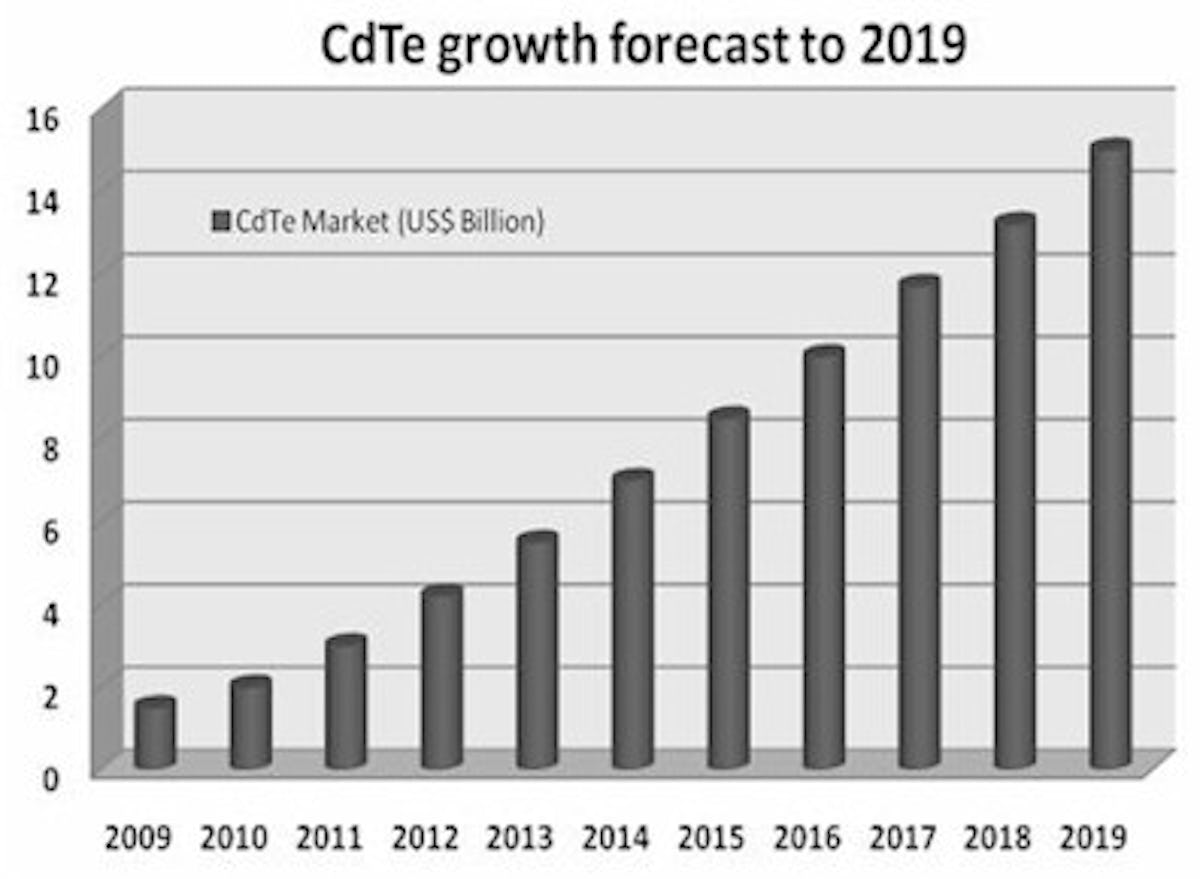 Photovoltaics Beyond Conventional Silicon Europe 2009, co-located with Printed Electronics Europe, is in Dresden, Germany on 7th - 8th April. This conference maps the launch of many forms of flexible solar cell designed for replacing everything from power stations to batteries, but also making totally new things possible in e-packaging, skin patches delivering drugs and mobile phones and laptops that will never have flat batteries. With over 50 exhibitors and over 700 attendees, these joint conferences and exhibition are set to be the biggest of its kind. For more information on the conference, visit www.IDTechEx.com/pvEurope.
For more information on the topic please contact the author Dr. Harry Zervos at h.zervos@IDTechEx.com or to find out more about the Photovoltaics Beyond Conventional Silicon Europe 2009 conference please contact the Event Manager Mrs. Chris Clare at c.clare@IDTechEx.com.
Top image: Solar farm using First Solar's CdTe cells