During the co-located events Printed Electronics Europe 2009 and Photovoltaics Beyond Conventional Silicon Europe 2009 in Dresden, Germany last week, IDTechEx technology analyst Dr Harry Zervos followed closely the sessions of the photovoltaics part of the conferences. Highlights of the two days of lectures and presentations are presented below.
Professor Pietro Perlo of Fiat Research Centre, the world renowned car manufacturer, who has recently been in the spotlight due to its high profile acquisition of a large part of Chrysler in the USA, made the company's intention to use innovative photovoltaics in future ranges of cars very clear. The Phylla, pictured below, is a prototype that's used like a "mobile lab" for testing new and sustainable technologies in the efforts of making this car a fully electric vehicle. Similar prototypes are coming in the market in the next few years with the Topolino being one of the commercially available cars that will be equipped with solar cell technology. 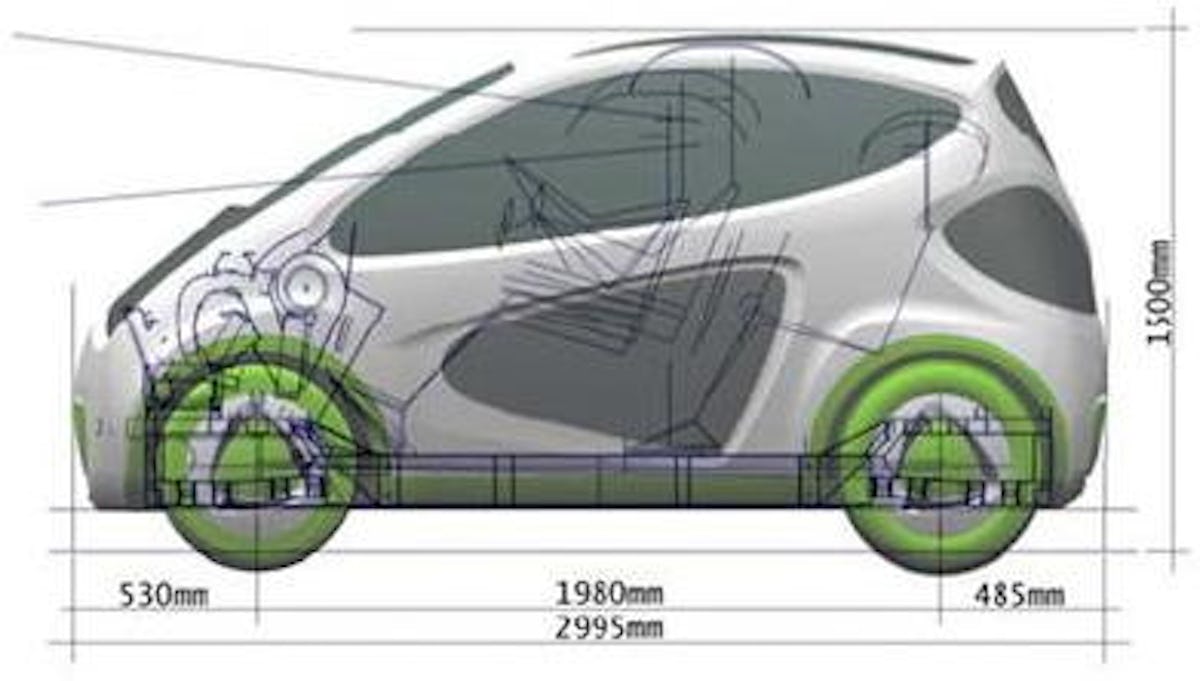 The integration of different functionalities that would minimize manufacturing complexity and costs was another point raised by Prof Perlo who gave examples of integrating photovoltaics, thin battery, LED and RFID technologies in the company's future models.

Dr Ritter of Centrotherm Photovoltaics AG gave an overview of the company's CIGS turnkey solutions. He pointed out the efficient process between contract signing to delivery (1 year) and full production in 22 months. The company is currently providing up to 50MW lines with an efficiency of 10%, which is projected to reach 12% by 2011 and 14% by 2013.
In terms of a cost breakdown of the company's manufacturing process (for more details see picture below): 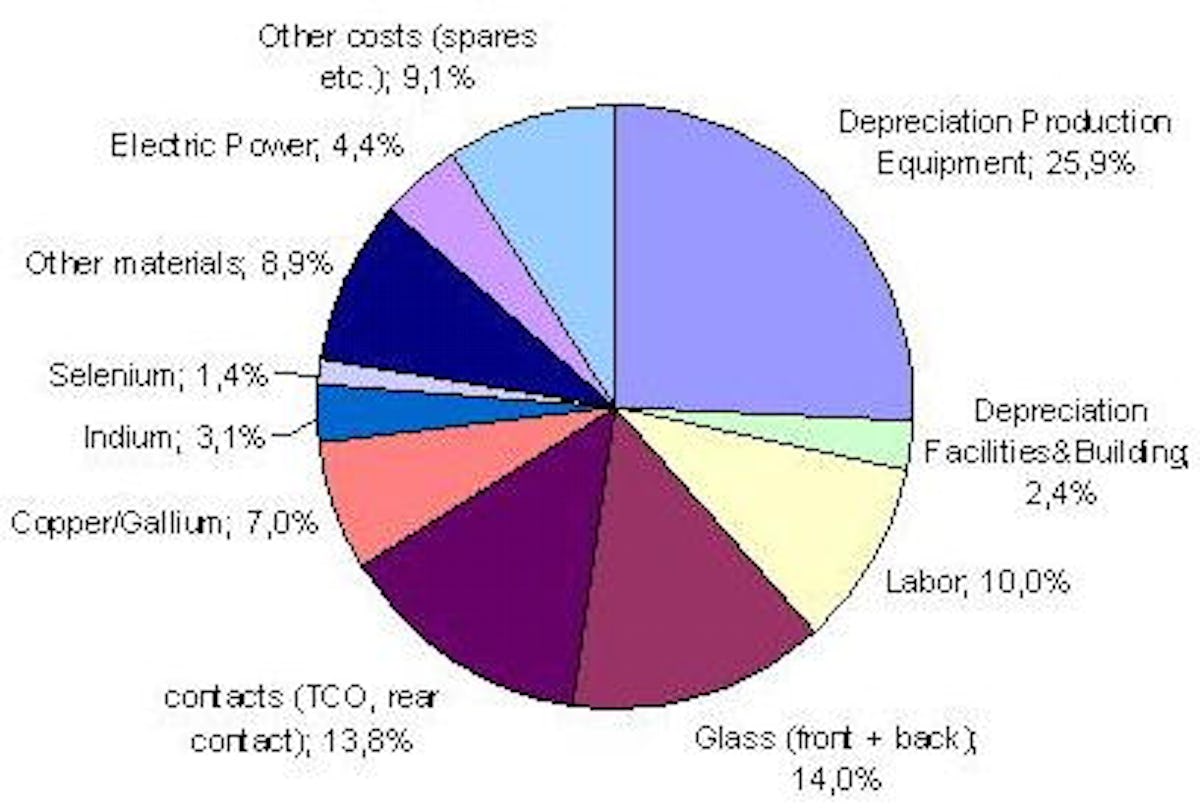 In a subsequent question on whether the price of Indium would be playing a vital role in the cost effectiveness of CIGS technology, Dr Ritter commented that its current cost percentage along with the availability of new sources for Indium make this a non-issue.

Wurth Solar is currently producing CIGS solar cells at the company's 30MW facility at an efficiency of 12%.
Bernhard Dimmler gave a very interesting overview of thin film technologies stating how forecasts state that thin film percentage by 2012 would be approximately 30% of the overall PV market with over 100 companies currently either producing, or being able to give time frames for full production. Of those companies approximately 82 are silicon based, 19 are CIGS based and 7 are CdTe based and 5 are working on DSSCs and OPV.

The inventor of Dye Sensitized Solar Cells, Prof Michael Graetzel, presented his vision for growth for DSSCs, which have now reached efficiencies of approximately 15% in the lab and are supported by a lot of work in companies worldwide (especially Japanese giants such as Toyota, Sharp, SONY, etc.). 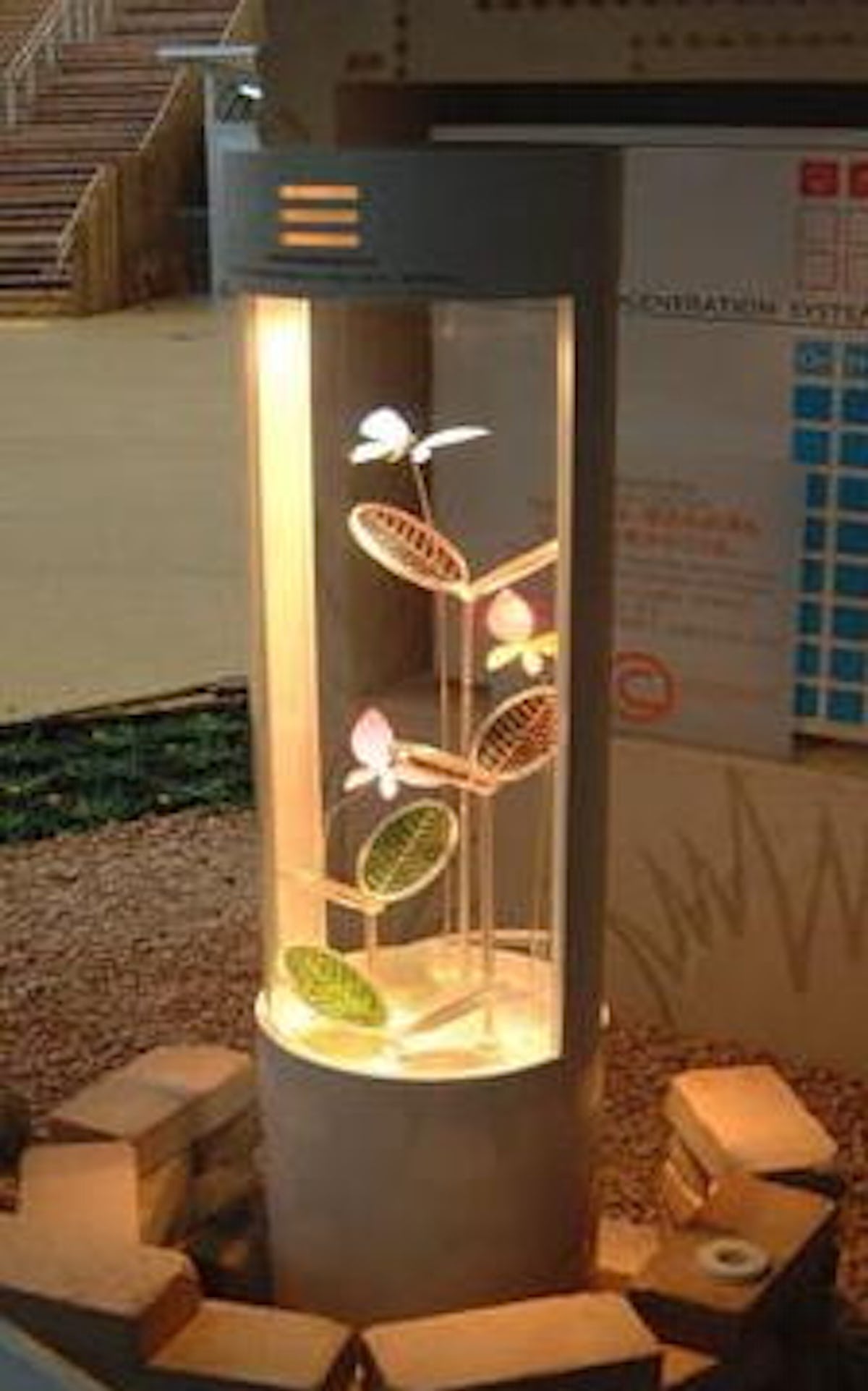 Pointing out the importance of "friendly" competition between different technologies and how there is room for all thin film technologies; Prof Graetzel also gave an idea of first commercial applications of DSSCs, from portable chargers for small devices to solar plants as seen in the picture above.

Quantum Dot Sensitized Solar Cells and the work undertaken at Universitat Jaume I in Spain were presented by Iván Mora Seró. The principle of these cells is based on the use of quantum dots rather than a dye as a sensitizer. Efficiencies of less than 1% where achieved with the use of a linker whereas direct adsorption led to efficiencies over 1%. The incorporation of a ZnS layer led to a further increase in efficiency to 2%, due to a reduction in recombination effects.

Solar power textiles were also addressed during the conference, with power textiles focusing on deposition of inorganic materials through chemical vapor deposition techniques and Michigan University focusing on the incorporation of organic solar cells in traditional textile manufacturing.
Dr Steffi Sensfuss of the TITK (the Thuringian Textile Institute) focused on the organic solar cell research and the development of polymers absorbing at higher wave lengths in order to obtain a wider absorption range. Polymer solar cells based on these materials achieve better efficiencies of up to 2.6%. Dr Sensfuss also presented on the TITK's efforts for reel to reel manufacturing of solar cells which achieved efficiencies of about 1.75% at the institute's facilities.

Alcan Packaging, developers of encapsulation and packaging films for different applications presented their work on encapsulation materials for Photovoltaics. Following past comments from Konarka that the price level at which barrier materials become affordable for OPV applications is approximately $5/m2, Bertrand Jannon of Alcan Packaging mentioned that his company's barriers are close to that price range and can give adequate lifetime (2-3 years) to portable OPV applications such as indoors solar chargers. Further work is undertaken worldwide on the topic, in order to achieve better barrier properties at non-prohibitive prices.
Source of top image: Global Solar Energy, Inc
If you missed this event then attend Photovoltaics Beyond Conventional Silicon USA 2009 Dec 2-3, San Jose, USA
Also read Thin Film Photovoltaics and Batteries 2009-2029 and Inorganic and Composite Printed Electronics 2009-2019.