Energy harvesting is popularly defined as converting ambient power to electricity to make small devices self-sufficient, often for decades. Even hundreds of years of life is in prospect. It is certainly not renewable energy on the heroic scale of replacing power stations with grid electricity from the power of the wind, waves and so on. However, there is a middle ground of making things such as trucks and railway stations more energy efficient. For example, regenerative braking and harvesting electricity from shock absorbers and exhaust heat in vehicles means they become more energy efficient. The trans Australia race involves cars that receive all their motive power from photovoltaics. Japan is already harvesting energy from travellers walking over flexing paving at ticket barriers, this electricity being used to power displays. 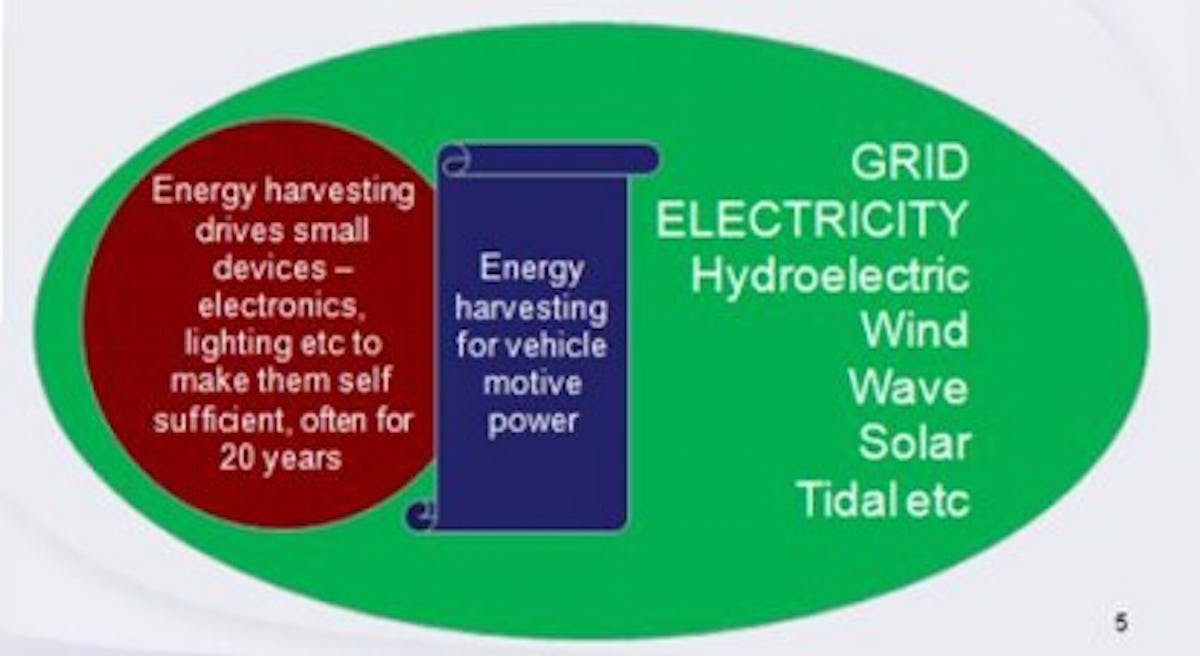 Source IDTechEx report "Energy Harvesting and Storage 2009-2019"
For both the core energy harvesting business and the harvesting within bigger things, the question arises as to what types of energy harvester will attract the big money, creating billion dollar businesses. Academia is not necessarily driven by commercial potential, so the huge leap in work on piezoelectrics and photovoltaics may or may not be an indication that these types of energy harvesting will come out on top. Other candidates include thermovoltaics exploiting heat differences and electrodynamics. Then there are dozens of other curiosities such as use of magnetostriction, electrostatic capacitive devices including electroactive polymers, electrets and so on and doing it all in miniature with micro electromechanical systems MEMS.

All are being applied to an impressive variety of applications. Piezoelectrics serve in the gas lighter and the light switch that have no wiring or battery. Photovoltaics appears in calculators, street furniture, satellites and much more besides and now we have transparent photovoltaics in the form of flexible film and even photovoltaics that converts ultraviolet, infrared and visible light and other versions tolerant of narrow angles of incidence and low levels of light. All this will hugely widen the number of possible applications. However, electrodynamics has moved from the bicycle dynamo to vibration harvesting, electricity from flexing floors and pavements, micro wind turbines and even powering the implanted heart defibrillator or pacemaker from the heart itself. No need to cut you open to change your battery any more. Universities should do much more to back this up.

Thermovoltaics is being tested in implants and on car exhaust pipes, not just in engines. Ultra low cost laptops for the third world employ both photovoltaics and electrodynamics where one project finds that a ripcord is preferred to a crank.

Many harvesting options are being tested by the US Military for robot jellyfish and robot bats both for surveillance. Some people seek to drop so called wireless sensor nodes from helicopters that self organise in a self healing wireless mesh network if only they could do away with the batteries. Energy harvesting will solve that one. The applications include monitoring forest fires and other natural disasters as well as pollution outages over vast, inaccessible terrain.

IDTechEx has analysed a large number of energy harvesting activities in its report "Energy Harvesting 2009-2019" and produced ten year forecasts for everything from self-sufficient wristwatches to mobile phones that will never need a charger and light switches and controls that have no wiring and no batteries when fitted in buildings. To assist clients wrestling with business plans, we have had a shot at estimating what percentage of each forecast is attributable to which harvesting technology. Obviously, at such an early stage, the figures are highly speculative. They are summarised below, the total market in 2019 being multi-billion dollar. That means that even the niche opportunities are significant. Let us look more closelyat all this.
IDTechEx estimate of the value share of technologies in the global energy harvesting market in 2019:
Photovoltaic 62%
Electrodynamic 29%
Piezoelectric 4%
Thermoelectric 2%
Other 3%
Source IDTechEx report "Energy Harvesting and Storage 2009-2019"
We therefore see a clear route to billion dollar businesses in photovoltaic and electrodynamic energy harvesting, even ignoring the energy storage and associated electronics. The impressive effort on piezoelectric energy harvesting in the universities and research centres such as the German Fraunhofer Institutes may yet come up with something bigger than that portrayed above. However, as yet, IDTechEx finds it difficult to envisage piezoelectrics powering many wristwatches, mobile phones, laptops, e-books and other consumer items.

The key to Wireless Sensor Networks

While it is generally accepted that 70-90% of envisaged uses of Wireless Sensor Networks cannot succeed without some form of energy harvesting replacing short lived primary batteries in the nodes, it is far from clear that piezoelectrics will be the favoured solution here. It is true that, in military, aerospace, other industrial and even a few healthcare applications piezoelectrics have a place such as harvesting vibration. The piezoelectric light switch and piezo actuators in general have a great future but we have difficulty in seeing a very large income arising from the harvesting module itself, whereas that is all too clear with the photovoltaic and electrodynamic applications. Indeed, with these two technologies there are already large commercial successes in 2009. It would be interesting to hear an opposite argument.

So what of the extra market that some include in the term energy harvesting, such as ambient power conversion in vehicles and railway stations. In vehicles, it will be thermovoltaics that harnesses exhaust heat. Electrodynamics will harness power from shock absorbers ( Massachusetts Institute of Technology, recently announced) and give regenerative braking is already a reality. Moving flooring and pavements generate power from people walking over them. They achieve this electrodynamically or by piezo power and the same is true of vibration harvesting in bridges, roads and aircraft.

The future of energy harvesting by both definitions will be thoroughly explored in the conference Energy Harvesting and Storage Europe in Cambridge, UK on 3rd-4th June. There are optional Masterclasses before and after the conference, an exhibition and visits to local centres of excellence. The emphasis is on the needs of the end users, the markets and the technological road maps, so it is not a primarily academic event. Primarily, it is concerned with doing good in society and creating large, profitable suppliers of energy harvesting products.

What is really needed

The 30+ speakers will include Nokia on the mobile phone of the future and its need for energy harvesting and the French Atomic Energy Commission which is both a developer and a user. Structural Graphics, which recently did the electronic Esquire magazine, and requires harvesting for what comes next, and representatives of the military and oil sectors will also describe their experience and needs. So will PolyPhotonix, a new company that will offer wallpaper lighting and displays that need local power. Its CEO, Richard Kirk, will also cover his involvement in Lighting for Africa, a collaboration over three continents on use of microbial fuel cells harvesting dirt.

Many innovative new forms of energy harvesting will be reported by the Fraunhofer Institute for Integrated Circuits in Germany, the Holst Research Centre in the Netherlands, Southampton University in the UK and others. The EnOcean Alliance is based in Germany but has over 70 members as far afield as the USA. It sits astride the business of wireless, battery-less switches, actuators and sensors for buildings and other applications because the members' products are interchangeable and over 500,000 have already been fitted, all with energy harvesting. It will present at the conference. Some speakers will describe how the new flexible laminar batteries are used to store the harvested energy. Greatly improved interfacing electronics and ultra low power device electronics will also be covered. See www.idtechex.com/eh for more details.
For more attend: Energy Harvesting and Storage Europe 2009
Also read: Energy Harvesting and Storage for Electronic Devices 2009-2019