Printed electronics is using more inorganics and composites in the quest for higher performance, lower costs, finer feature size, stretchability and creation of radically new components such as memristors, supercabatteries and metamaterials. Here is what 26 developers and suppliers have been up to in 2009.

Ascent Solar Technologies, Inc a developer of flexible thin-film photovoltaic modules, recently announced success manufacturing monolithically interconnected 5 meter long flexible light weight modules on a polyimide substrate using copper indium gallium diselenide.
That means such modules can be hand-carried and installed without roof strengthening, as opposed to glass modules that have to be hoisted with a crane across rooftops. It can produce 123 watts under standard test conditions with an aperture area efficiency of 9.1 percent.
CIGS promises to be more efficient, have lower cost of ownership and longer life than amorphous silicon flexible alternatives for open air use.

Electronic memory chips may soon gain the ability to bend and twist as a result of work by engineers at the National Institute of Standards and Technology (NIST) who have found a way to build a flexible "memristor" memory component out of inexpensive, readily available materials.
A memristor is a resistor that changes its resistance depending on the amount of current that is sent through it - and retains this resistance even after the power is turned off.
The new device is promising because of its potential applications in medicine and other fields. The memristor is a fundamentally new component for electronic circuits developed in 2008.
By low cost sol-gel process, the researchers deposited a thin film of titanium dioxide (already used in printed electrophoretic displays and printed DSSC photovoltaics) on polymer sheets. By adding metal contacts, the team created a flexible memory switch that operates on less than 10 volts, maintains its memory when power is lost, and still functions after being flexed more than 4,000 times.

Manufacturing costs for high efficiency 50 micron crystalline solar cells will now be significantly less thanks to a high-throughput industrial silicon-ink inkjet printing system, according to developers OTB Solar in partnership with Innovalight. They use inkjet printing of silicon-ink to halve the number of costly manufacturing processes required to produce highly efficient solar cells.
NanoGram silicon inks for printed electronics are based on its proprietary laser pyrolysis process.
NanoGram has developed processes to make large area, thin layers of silicon cheaply through the additive process of printing nano-Si based inks and, like Kovio which also prints its own specially developed silicon inks and focuses on transistor circuits, it intends to make complete devices, both solar cells and transistors being in its sights.
Key to silicon ink manufacture is to achieve the appropriate particle sizes and size distributions, which enable low temperature processing when the ink is used to create devices. The particle sizes in a given measure need to be within a controlled distribution, and the particles need to be non-agglomerated - previously a considerable problem. In addition, particle oxidation needs to be avoided in order to achieve high performance in printed electronic devices. Stable inks must also be formulated from these particles to be compatible with standard printing techniques such as ink jet printing and wide area coating. NanoGram has also developed techniques for doping the silicon particles during the reaction in highly controllable doping levels.
Another of NanoGram's focus is on transistors, and one application is display backplanes. Within a few months of development, the company has passed the mobility of amorphous silicon, and believes that mobility in the range of >100cm2/Vs is achievable, although for display backplanes that is not needed.
While the sintering temperature of the deposited transistors is confidential, IDTechEx note that Teijin, the plastic substrate supplier, is a partner of NanoGram involved in a joint development agreement (JDA) to develop silicon inks for flexible electronic applications.
In addition, NanoGram investors include a wide range of companies with a number from Japan, given that one of the largest applications will be display backplanes.
For more information, NanoGram will present at the IDTechEx Printed Electronics USA conference and trade expo in San Jose, December 2-3 www.IDTechEx.com/peUSA.

Zinc oxide based semiconductors hugely outperform organic alternatives in conventional transistor electrical parameters though organics have a place by sometimes being ambipolar, light emitting and potentially lower cost.
Indium zinc oxide with up to 50 cm2/vs mobility is the favored formulation at developers Hewlett Packard (process licensed to two companies already), Oregon State University, Tokyo Institute of Technology, Toppan Printing, Cambridge University CAPE and various Portuguese and German institutions such as the University of Karlsruhe. The more troublesome p types have now been produced so CMOS circuits are feasible. Now add Samsung, which exhibited a printed oxide TFT array for an LCD display this year. The display was 4 inches, 100 pixels per inch (ppi) and the mobility achieved was 0.6 cm2/Vs.

Lead zirconate titanate PZT is the archetypal piezoelectric used for energy harvesting and sensors.
Using sol-gel processes, it is now routinely printed to reduce cost and improve performance, work proceeding at Virginia Tech, Southampton University in the UK and elsewhere.

In 2009, printable copper ink was announced by NovaCentrix, Hitachi Chemical and others for antennas, interconnects, electrodes and other parts. It is argued that, in the form of the new inks, it does not have the traditional problem of an insulating oxide forming and it is not a biocide (when in nano form) subject to the severe price hikes suffered by silver.

Creative Materials' Medical Grade Electrically Conductive Ink is now used in a range of medical electrode applications, including ECG and TENS electrode applications, transdermal drug delivery, defibrillation, and monitoring systems. These products feature excellent adhesion to a wide variety of surfaces, including polyester, polyimide, and glass. With a high percentage silver filler, they are often used in defibrillator electrodes and to make disposable ECG electrodes.
Cima nanotech CEO Jon Brodd reports his company is sampling its flexible transparent conductive film made with silver nanoparticles in emulsion that self align into a connected netting-like pattern upon drying, rather like irregular chicken wire.
The random openings allow 80% transparency, about the same as some ITO, while the silver lines reportedly provide sheet resistance of 5 ohms/square, as good as or better than much ITO.

Novacentrix is introducing a scalable solution to processing high temperature semiconductor materials on low temperature substrates like paper and plastic, with a new generation Pulseforge tool with 10-20 times the power of the previous production models, which are aimed at drying or sintering metallic inks. 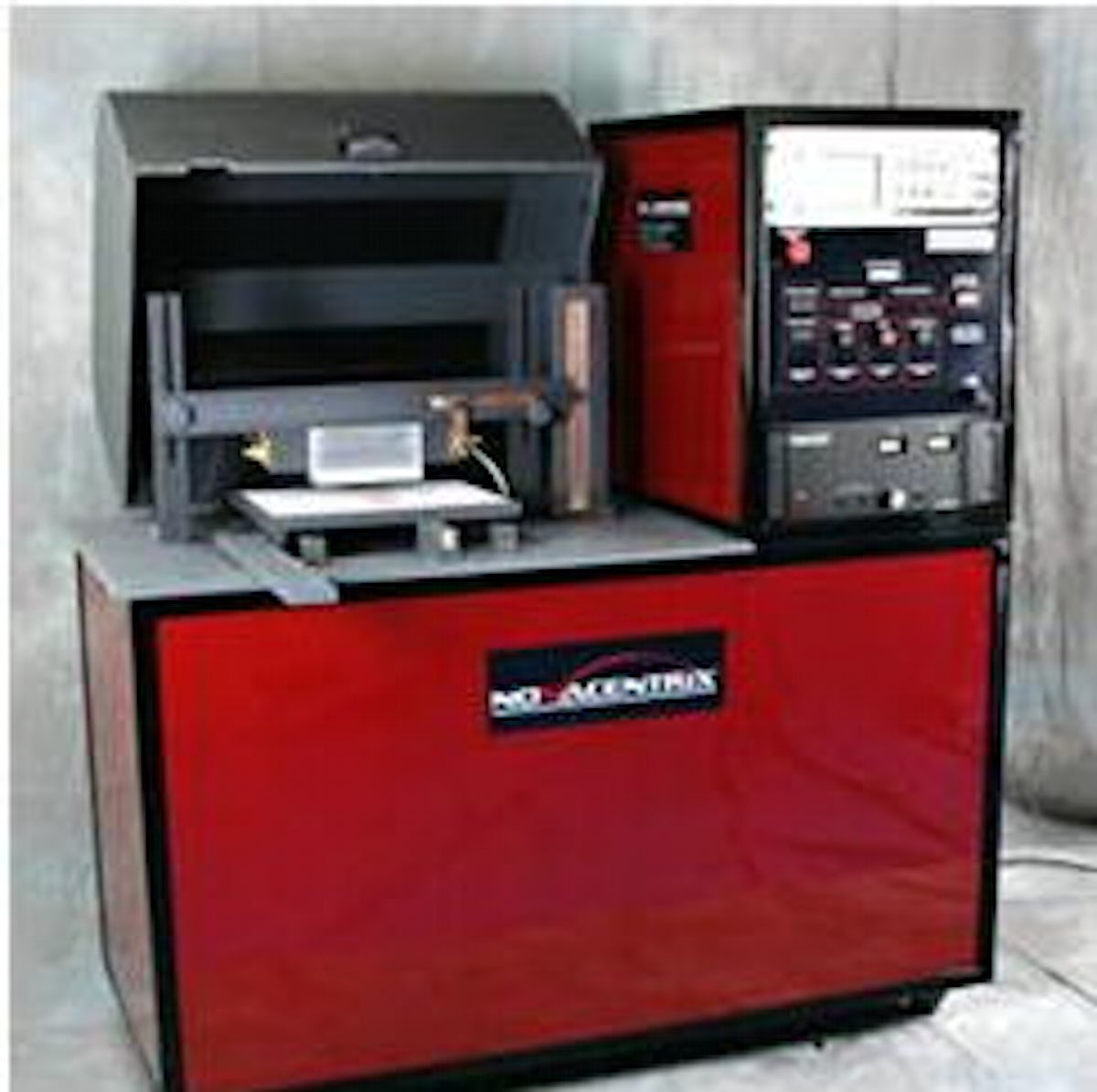 The Paper Battery Co first reported on its carbon-nanotube-based paper battery a couple of years ago. It has now closed an initial round of seed funding and targets a roll-to-roll printed supercapacitor by next year, having decided that this is the better route to market for these composites.
Instead of having to press together the usual electrode, electrolyte and separator layers needed for batteries and supercapacitors, and seal them in a can, the company has a process to makes them all in one nanocomposite sheet of cellulose polymer matrix, that binds together carbon nanotubes and other carbon materials for the electrodes, and also soaks up the ionic liquid electrolyte.
The resulting black paper-like sheets can be shaped into the skin of a device, or even wrapped in to the casing of a battery to extend its performance. Initial product target energy density is 10-20Wh/kg, for the first product targeted for next year.
Meanwhile UK start up Nanotecture has announced that it will be sampling its supercabatteries that combine the electrochemistry of both supercapacitors and batteries. Some versions are less than one millimeter thick and they employ inorganic nanomaterials. The company refers to them as microbatteries, though it sees potential for replacing supercapacitors rather than batteries with this technology.
Researchers at UCLA have developed a new method for producing a hybrid graphene-carbon nanotube, or G-CNT, for potential use as a transparent conductor in solar cells and consumer electronic devices. Indeed, the earlier invented flexible CNT-based conductor is now used to connect organic light-emitting diodes (OLEDs) with the organic transistors addressing each OLED pixel. With improved conductivity and stretchability, it is now possible to fold the display in half or even crumple it up without damage, and to stretch it up to 50 percent of the original shape.
Using a rubbery CNT-based conductor developed a few months ago, researchers at the University of Tokyo have now made a stretchable display. With the advantage of being printable, this brings us closer to cheap flexible and conformal displays.

The UK Government's leading funding agency for research and training in engineering and the physical sciences, the Engineering and Physical Sciences Research Council (EPSRC) has announced a new £6 million, six-year program on nanostructured metal photonic metamaterials, to be established at the University of Southampton.
Metamaterials are artificial electromagnetic media with unusual and useful functionalities achieved by structuring on a sub-wavelength scale.
They employ the finest printing such as flexography and dip pen nanolithography because the feature size is less than the wavelength of light. They have this in common with the nanoantennas that are alternatives to photovoltaics and are being developed by Idaho National Laboratory. Ballistic diodes for the rectification side are being printed by Manchester University in the UK.
The aim of the Southampton metamaterials project is to develop a new generation of revolutionary switchable and active nanostructured photonic media thus providing groundbreaking solutions for telecoms, energy, light generation, imaging, lithography, data storage, sensing, and security and defence applications. The project runs from July 2009 to the end of 2015.
For more on this subject, read the IDTechEx report Inorganic and Composite Printed Electronics 2009-2019 www.IDTechEx.com/inorganic and Carbon Nanotubes and Graphene for Electronics Applications: Technologies, Players & Opportunities.
Attend Printed Electronics USA www.IDTechEx.com/peUSA or Printed Electronics Asia 2009 www.IDTechEx.com/peASIA for information as well as networking opportunities.
For more information on the topic please contact the author Raghu Das at r.das@IDTechEx.com or to find out more about the Printed Electronics USA 2009 conference please contact the Event Manager Mrs. Chris Clare at c.clare@IDTechEx.com.
Top image: CIGS solar cell from Ascent Solar Technologies