How is a resistor made?

A resistor is a length of material that conducts electricity poorly. It resists the flow of electricity by turning it into heat so it can be used as a printed heater, for example driving a thermochromic display as on a Duracell battery tester or VTT Technology printed smart packaging or it may form part of an electronic circuit. Resistive materials that are used in printed electronics include carbon and certain metals. The magnitude of this resistance is expressed as in ohms.

How is a capacitor made?

A capacitor is an electrical and electronic device that can store energy in the electric field between a pair of conductors. The most popular way of achieving this is with a thin wide area of insulating "dielectric" that has a variety of necessary properties.
The capacitance value of any capacitor is a measure of the amount of electric charge stored per unit of potential difference (voltage) between the plates. The basic unit of capacitance is a farad. However, this unit has been too large for general use, so microfarad is more commonly used.
An electrolytic capacitor is a type of capacitor that uses a conducting liquid as one of its plates. This makes contact with thin insulating material grown on an electrode etched or otherwise treated to give larger area and therefore capacitance. In 1978, a variant called the supercapacitor was commercialized with about one hundred times the capacitance in a given size. Supercapacitors are the only type of capacitor that has no dielectric material. Instead it uses electrochenistry to form a so-called electrochemical double layer a few nanometers thick (ie almost atomic scale) that is far thinner than a dielectric and it does this over a large area of eg carbon. Thus the exceptionally high capacitance. Though not yet printed, some supercapacitors are flat and about one millimeter thick.

How is an inductor made?

An inductor is a coil of conductor. Its inductance expressed in henrys can be increased by inserting special materials in the coil. As yet, it is not practicable to make printed versions of high inductance, so printed and thin film inductors are only used where little inductance is required as with certain antennas (aerials) and anti-theft labels where a capacitor and inductor connected in a circle (in parallel) set off an alarm when you steal something from a shop.

How is a memristor made?

Titanium dioxide is a harmless material used in sunscreen and conventional printing. It is the white pigment in so-called electrophoretic printed electronic displays. Its nanoparticles create a large area support for the dye that converts light to electricity in printed Dye Sensitised Solar Cells DSSC and it is the basis of the first memristors.
Like silicon, titanium dioxide as typically supplied is a semiconductor - intermediate between the best insulators (dielectrics) and metals in conducting electricity. In its pure state, it is highly resistive, making it a dielectric. However, it can be doped with other elements to make it very conductive. Such dopants do not stay stationary in a high electric field. They drift in the direction of the current. This mobility is death to a transistor, but is exactly what makes a memristor work. It can also be created by heating the oxide to create vacancies where oxygen atoms (strictly charged atoms called ions) are missing. A memristor is produced if an extremely thin layer of conductive titanium dioxide is deposited over an insulating layer, with conductive electrodes on this sandwich above and below. The picture above shows many of these memristors made side by side.
Putting a bias voltage across a thin film of titanium dioxide semiconductor that has dopants only on one side causes them to move into the pure titanium dioxide on the other side reducing resistance to electricity. Running current in the other direction will then push the dopants back into place, increasing the resistance. All this works if the layers are no more than 150 nanometers in thickness but that is familiar territory for those printing electronics.

How is a battery made?

Source: NREL
The flow of energy from the battery to provide electric power sometimes results in a decrease in voltage (energy level). In other words, as a battery is used or discharged over time, the voltage may drop as the anode and cathode undergo electrochemical changes. Because the nature of the chemical reaction in a cell governs the maximum voltage and current that can be produced and both are usually too small for typical applications, it is common to connect many cells into a battery thus providing higher voltage (connection in series ie one after the other) or higher current (connection in parallel ie side by side) or both.
A manganese dioxide zinc printed battery

Source: Power Paper
Let us look at that again. A battery is a device that produces electricity by a chemical reaction between two substances. Traditionally, a battery is two or more such "electrochemical cells" which store chemical energy and are connected to make it available as electrical energy. However, common usage has evolved to include a single electrical cell in the definition.

How is a transistor made?

Semiconductors can be doped with certain materials to make them either n type, conducting by electrons or p type, conducting by holes ie places where electrons should be in the atomic structure but are absent.
The favorite construction of transistor is the so-called field effect transistor FET that uses one of these types of semiconductor. They are typically used back to back with a similar construction using the other type of semiconductor because this gives low power consumption. This is called a Complementary Metal Oxide Semiconductor CMOS circuit. The geometry of a printed or other thin film FET is shown below. Although the semiconductor is referred to as "polymer", both printed zinc oxide and nanosilicon semiconductors give printed transistors of better performance in most respects. There may be a place for all of them if the polymer ones demonstrate a cost advantage.
Construction of a printed FET 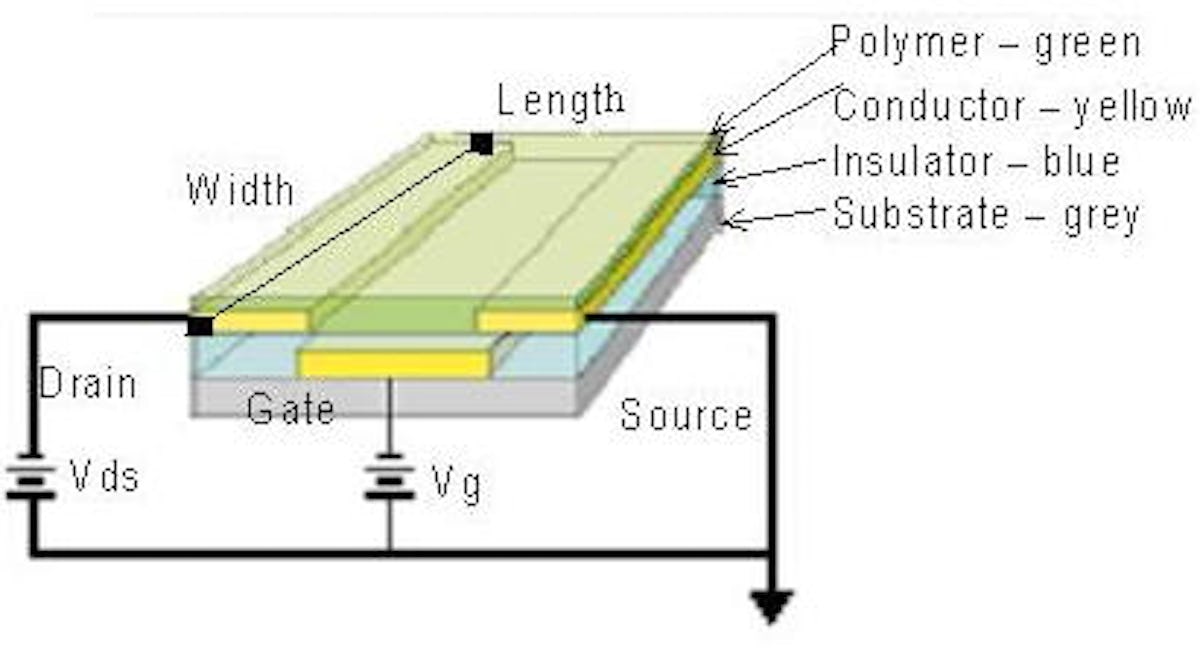 Source: Library
Printed transistors are the biggest logjam in the rollout of printed electronics because transistors are needed in almost all electronic circuits. Despite hundreds of organisations working on printed transistors, we have yet to see the necessary circuits with at least hundreds of transistors per circuit become available commercially. It is always months away. Nevertheless, the promise is considerable, not least because completely new designs of transistor become possible when printed or at least in the form of thin films. One type from Nano ePrint has only one printed layer and no gate dielectric. This is not therefore an FET. It has unusually small size, highest frequency range for operation and possibly lowest cost and this company favors zinc oxide semiconductor for most applications.

Do not believe all the talk of electronics being fast moving. Sometimes that is true but four thousand years ago, in ancient Egypt, dissimilar metals were used in proximity and this may have constituted a battery.
Two thousand years ago, in what is now Iraq, a container containing dissimilar metals - iron and copper - was used. The discoverer found no trace of what liquid was employed, however.
In 1800, Volta and Galvani reported on the electricity created by placing silver and zinc on paper soaked in electrolyte. In 1836, Daniel put a copper electrode in copper sulphate solution and zinc in a zinc sulphate solution, the two constructions being separated by a porous membrane.
Lead acid rechargeable batteries were invented by Plante in 1839. Manganese dioxide single use ("primary") batteries appeared around 1866 and now we are printing them.
The capacitor was invented by Van Musschenbroek in 1746. The principle of the electrolytic capacitor was discovered in 1886. The memristor was predicted in 1971 but only made in the laboratory in 2008. It took six years from the invention of the supercapacitor in 1972 for commercial versions to appear so can only guess when commercial memristors will appear. That said, printed diodes, transistors and other components beyond simple conductors and resistors have had twenty years in the wilderness and they are about to burst on the scene making mainstream products possible. Printed so-called ac electroluminescent displays that emit light in dramatic blocks of color have been available since 1964. Nowadays they are printed on low cost flexible polyester film. As we said earlier, a variety of printed and thin film flexible batteries have been available for some years and people will soon figure out how to print many other components on top of these to make complete devices. A widely marketable toolkit of printed components and therefore products is about to hit the marketplace. In particular, printed transistors and memory have been in the wilderness for over ten years and their commercialisation will happen soon.
For more read Introduction to Printed Electronics, Thin Film Photovoltaics and Batteries 2009-2029, Printed and Thin Film Transistors and Memory 2009-2029, Batteries, Supercapacitors, Alternative Storage for Portable Devices 2009-2019 and Displays and Lighting: OLED, e-paper, electroluminescent and beyond.
Also attend Printed Electronics Asia 2009 or Printed Electronics USA 2009.
Source top image: Hewlett Packard