First video in print to appear in American magazine advert

The World's first video in print advertisement will appear in next months edition of the American show biz magazine "Entertainment Weekly".
Broadcast network company CBS will run the ad to promote their Monday prime-time lineup in partnership with PepsiCo who will endorse Pepsi Max soda, state CNET news, which is published by CBS Interactive, a unit of CBS. The magazine with the special inserts will be delivered to a limited number of subscribers in the New York and Los Angeles areas.
The screen uses thin film transistor liquid crystal display (TFT LCD) technology, protected with polycarbonate. It is 2.7 millimeters thick, with a resolution of 320x240, which has been in development at Americhip for the last two years. The battery lasts for about 65 to 70 minutes, and can be recharged with a mini USB cord - there's a jack on the back of it.
The advert believed to work like a singing greeting card will activate when you open the page. The battery is likely to sit between the pages and although the sound is crisp and clear I am not sure if they have used printed speakers. To see the ad in action click here. 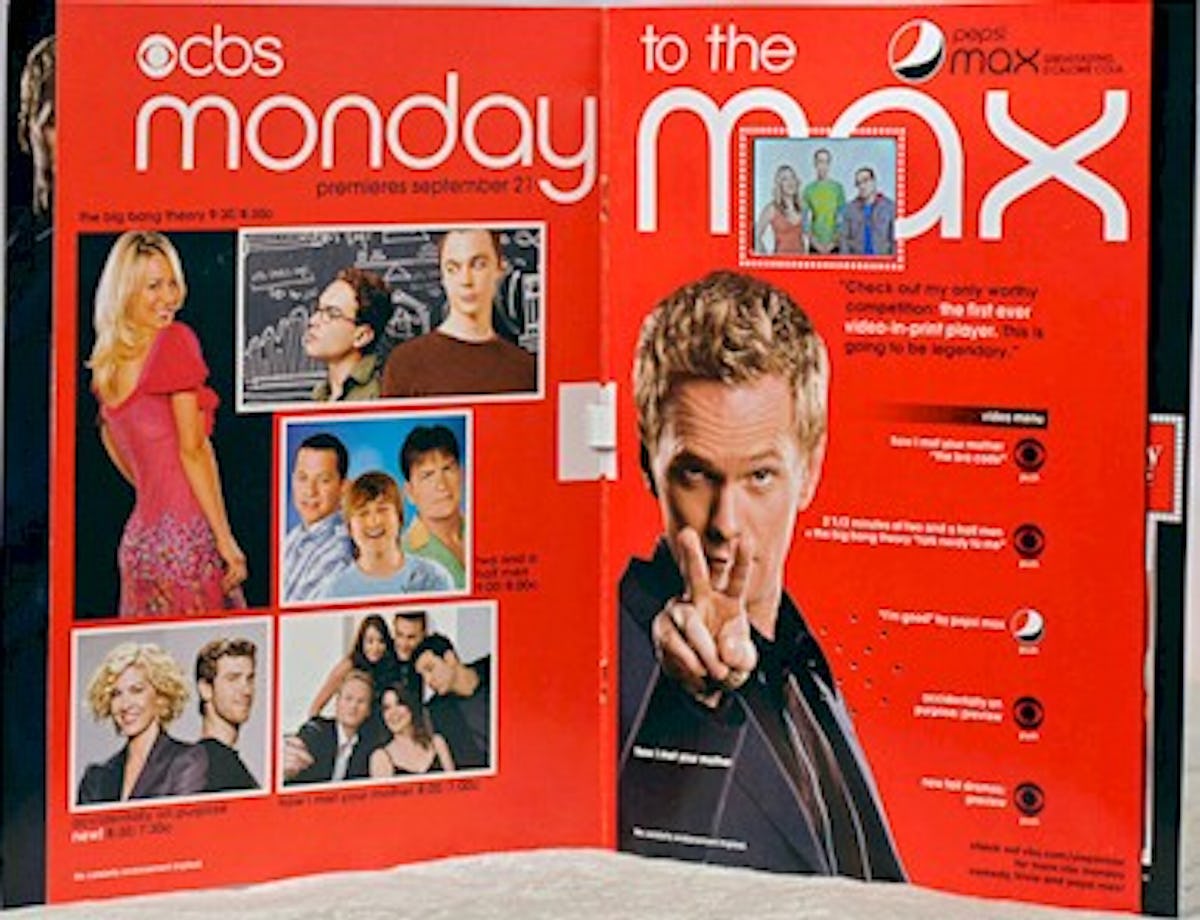 Printing electronic displays on paper are not widely used because the paper needs to be coated in plastic, as the surface is too rough and absorbent to print electronic devices. Therefore, coating is needed to planarize the surface, which will prevent the electronic devices from penetrating the paper - clearly increasing the cost. The display in the CBS advert is embedded in the paper, rather than printed directly on the paper.
Whilst it's not yet Harry Potter's futuristic newspaper, the Daily Prophet with printed displays, researchers are currently working with the technologies and we may one day see video images on printed OLED screens on paper with transparent electronics powered by printed batteries and photovoltaics using a roll to roll process - providing newspapers are not replaced by electronic readers...
Other articles that may be of interest include: Video newspapers with high-performance transparent electronics, Video images with OLED wallpaper, OLED displays could be used in smart product packaging, Smart loudspeaker substrate for printed electronics and Digital Paper That Talks to You.
Also attend Printed Electronics Asia 2009 or Printed Electronics USA 2009.