The engine of the new printed electronics will be printed transistors on flexible substrates that can be one tenth to one hundredth of the cost of those in simple silicon chips.
Most of the work has been directed towards organic transistors because they are easy to print and some believe that they are a good route to ambipolar transistors (p and n type in one device) and light emitting transistors. However, tussling for the low cost slot - the main market need - we now have a rapidly increasing numbers of research centers working on inorganic printed transistors, both printed silicon and printed metal oxides, particularly based on zinc oxide semiconductors. These exhibit greater charge mobility in the semiconductor and therefore higher frequency of operation opening up larger potential markets.
Some say they also offer lower material costs, particularly if low temperature processes can be employed. Printed silicon nanoparticles have received the least attention because the inks are very difficult to make and often high temperature annealing is needed after the deposition.
In the USA, companies such as Kovio and Nanogram have pioneered printed silicon transistors and Epson and others in Japan have done work. Now some very interesting advances are being reported in South Africa, the scientific papers including one reporting collaboration with the US company Printovate. Daniel Gamota is co-founder, with former Motorola colleague J.Zhang, and president of Printovate, Inc. which developed a clean-tech large area electronics manufacturing technology, for point-of-care diagnostics, lighting, and renewable energy applications.
Previously at Motorola in the role of director, he was responsible for all administrative, technical, and product development activities within the Large Area Electronics Department. Dan's leadership led to his department receiving a 2007 R&D 100 Award for commercialization of a printed electronics enabled product, manufactured using electrically functional inks (organic and inorganic semiconducting materials) and large area non-cleanroom manufacturing platforms.
In 2008, his department was internationally recognized for having fabricated the first all-printed active matrix flexible display module using conventional graphic arts printing technologies. Dan chairs several international groups that are developing standards for large area flexible electronics and nanotechnology (IEEE), and that are publishing large area flexible electronics roadmaps (International Electronics Manufacturing Initiative, Inc. - iNEMI).
He has been granted 38 patents, has published 27 articles in peer-reviewed journals, has co-authored three book chapters, and has co-edited the first book that combined the fields of graphic arts printing, microelectronics, organic semiconductors, and nanotechnology.
Dan was elevated to IEEE Fellow for his contributions to the field of printed electronics and nanotechnology. He earned a PhD in Engineering from the University of Michigan and an MBA from Northwestern University's J.L. Kellogg Graduate School of Management.
Professor David T Britton and Professor Margit Härting of the Department of Physics at the University of Cape Town are at the center of the exciting new work on printed silicon transistors in South Africa. Their claims that they avoid high temperature processing are particularly interesting. In 2006, they published a paper in Pure and Applied Chemistry on "Printed nanoparticulate composites for silicon thick-film electronics" but 2009 has seen much greater advances reported with collaborators. Applied Physics Letters published "Fully printed silicon field effect transistors" on 15 May and, also this year, Thin Solid Films published "Composition and crystallinity of silicon nanoparticles synthesised by hot wire thermal catalytic pyrolysis at different pressures" .
Professor Britton will describe their latest breakthrough at the forthcoming IDTechEx conference Printed Electronics USA 2009.
Recently, the two professors have issued a brief examination of their work and its market potential. At the beginning, it says, "Following the strikingly simple idea of producing inks from silicon nanoparticles, two Professors at the University of Cape Town, South Africa have developed a new way to produce electronic devices by conventional printing techniques. The proprietary technology covers all aspects from silicon nanoparticle production to ink formulation, as well as the design of printed electronic devices."
Schematic diagrams of sample printed silicon devices, using nanoparticulate silicon inks 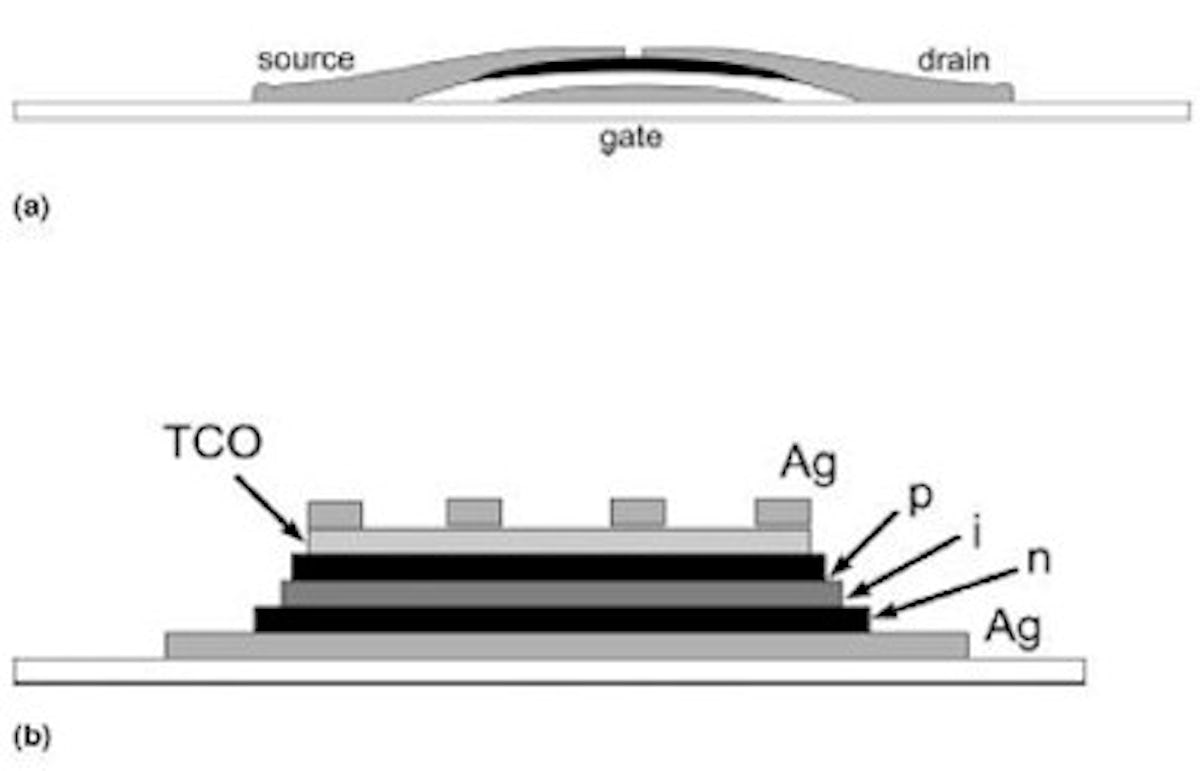