IDTechEx presented at the well-attended FlexTech Alliance meeting at Binghamton, NY, last week. The session focussed on the use of printed and flexible electronics for medical applications.
Raghu Das, CEO of IDTechEx, opened the session by presenting on the medical applications so far, including the successful skin patches, printed blood glucose sensors and smart blister packs to monitor medication compliance. The effectiveness of powered cosmetic skin patches can be seen in the images below. This has created a market for about 1 million batteries a month.

Source: Power Paper
Das reported that a major problem that exists in printed electronics today is the lack of understanding of what users need, and companies that can create new appropriate products for them. IDTechEx is trying to tackle some of this through its work directly with end users. 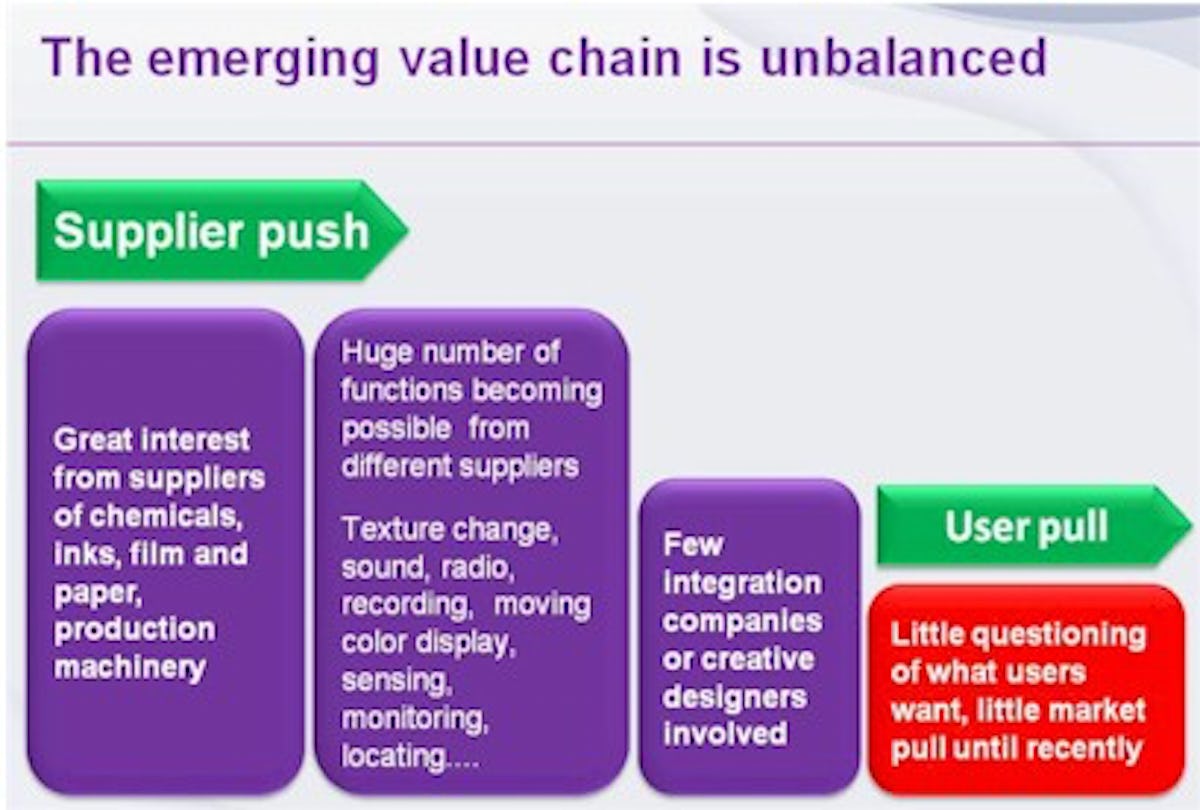 Source: IDTechEx
Das cited many problems in health care and other markets that could be tackled with the new electronics. In particular, there is a need by consumer goods companies to reinvigorate and differentiate brands. For example, printed electronics could be used to help overcome brand market share being eroded by supermarket own labels. A week ago, it was reported in the UK by the BBC that drinks maker Diageo filed a legal claim against UK retailer Sainsbury's for creating a drink that it claims copies their famous PIMM'S design (see the image below to make up your own mind). The BBC reports, "Diageo said the case should not affect its relationship with Sainsbury's, a key customer. "Sainsbury's is a valued customer of Diageo and we hope will continue to be so for many years," said the drinks firm." Ouch. 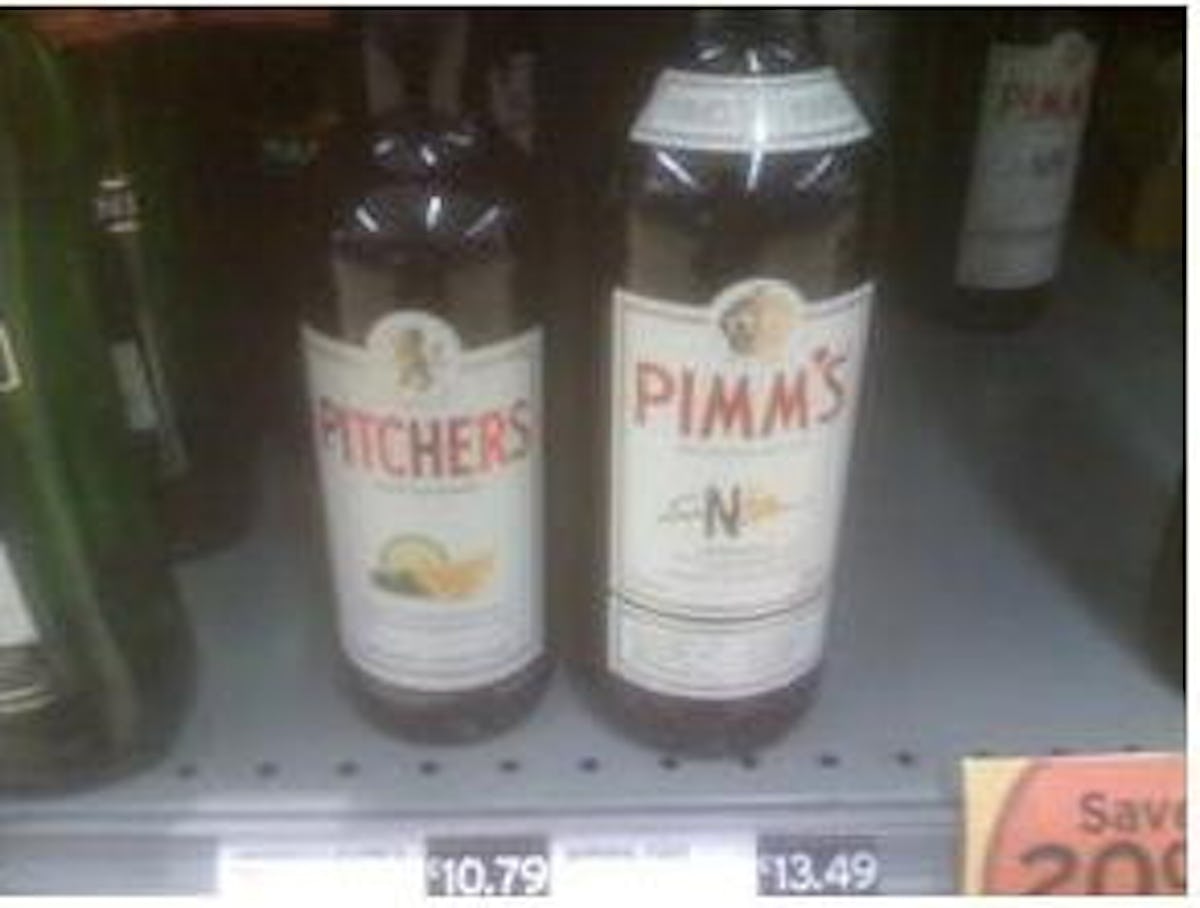 One of the organizations that is addressing the need to build new products is Parc, the research group that spun out of Xerox in 2002. Ana Arias, Manager of Printed Electronic Devices at Parc, spoke of a government funded sensor tape project they are working on. The remit was to develop a flexible, printed sensor tape for the US Military to be applied to helmets of soldiers to monitor the environment and impact to the head. Knowing the environmental data at the point of impact can give physicians important information to correctly treat the trauma, whereas now that data is not available.
Tough specifications were proposed - the sensor tape needs to monitor pressure (0 to 150 psi); light (0 to 400,000 Lux), acoustics (100 to 185 dB) and incorporate an accelerometer (0 to 1000 G). 40 samples at 5ms intervals are required to be measured for a period of 200ms in total.
Arias concluded that the electronics needed to operate at only 200Hz, well within the capability of printed organic transistors. The logic device that was designed required approximately 20,000 transistors; however, the vast majority of that is memory.
For the analogue circuits PMOS transistors were used and for the digital circuitry, CMOS was used, thanks to n-type semiconductors from Polyera. The p-type organic semiconductor was sourced from Flexink in the UK. The sensor strip itself combines mechanical and printed sensors, such as an all printed photosensor. The device is in the final stages of assembling. Arias sees many applications of this beyond the military - particularly in healthcare and Parc are talking to several device manufacturers.
For more information, Parc is presenting at the IDTechEx Printed Electronics USA 2009 event in San Jose, Ca on Dec 2-3.

Steve Roundtree of the John Hopkins Applied Physics Laboratory described the need for lightweight electronics for soldiers. The optimal carry weight is 30% of the body weight of a person, yet soldiers often carry much more than that. 1 month's supply of a regular lithium coin cell battery to power physiological status monitors for 363 marine personnel deployed in 2005, weighs a whopping 3347lbs in total. Weight is an increasingly important issue for the military. Roundtree suggests this is an opportunity for printed electronics.

Thanks to financing secured by the FlexTech Alliance, Binghamton University boasts an impressive manufacturing facility called CAMM (Center for Advanced Microelectronics Manufacturing). The Center is led by Binghamton University, Cornell University, and Endicott, a company that came out of IBM in 2002 and focuses on electronic substrates and assembly. Many other companies are also involved including Kodak and Nanomas.
The CAMM facility's remit is to address roll-to-roll manufacturing of flexible electronics. Equipment from Azores, KDF, Tamarack, Integral Vision and others has been purchased. The equipment allows for photolithography over large areas, with feature sizes of 4 microns on polyester film achieved at high yield in roll-to-roll processing, running at 2 foot per minute. CAMM has coaters, which have been used to coat silicon, aluminium and ITO in a vacuum roll-to-roll process at 40 foot per minute.
Among other things CAMM is working on solar and sensor applications. Sponsor Endicott has even fabricated devices on 12.5 micron thick substrates for medical applications. The Center welcomes enquiries by industry to use the manufacturing capability they have. For more information, see http://camm.binghamton.edu.