IDTechEx find that the total market size for e-paper displays in 2010 is $131 million rising to $1.17 billion in 2014. This is the value of the display component, not the product. To date, e-paper display technologies have been used in more than $1 billion worth of products. Much of the growth is driven by e-readers following the huge success of Amazon's Kindle. However, much more is to come. IDTechEx find that in 2020 the market value will reach $7.45 billion thanks to the availability of flexible, color displays and faster refresh rates.

A variety of e-paper display technologies have been developed which are enabling completely new products or are allowing for the introduction of electronic functionality in products where it was previously unavailable. It includes displays that are non-emissive (require light to read and are easily readable in bright light) and sometimes bi stable (only require power to change the image). Many versions are flexible and some can even be printed. It involves electrophoretic, electrochromic, electrowetting, cholesteric LCDs and other display types.
New companies are entering with improved technologies, and while the different technologies compete in some applications, many also have their own applicational sweet spots. For now, a key area of development for many is flexible displays, color displays and displays which can operate at faster refresh rates, which will open up new opportunities compared to the slow black and white versions that have been available for some time. Expect black and white e-readers on flexible plastic from as soon as the end of 2009. These will still be in a rigid frame but will be lighter and more robust than glass based versions. Watch Plastic Logic and PVI.
Electrophoretic displays see the strongest growth at the moment, thanks to e-readers. Over 20 e-readers are now available around the World but the technology has also featured in memory sticks, Esquire magazine, car key rings and much more. For e-readers, other technologies are only in trial phase such as the FUJITSU color reader that utilizes cholesteric LCD technology.
Themochromic, electrochromic and electrowetting displays are already being used in a diverse range of applications from the world's first disposable display on a gift card in 2003 (electrochromic) and battery testers (thermochromic) to indicators on batteryless, wireless switches (electrowetting).

Number one by a long way is E-ink, which was recently purchase by Taiwan based PVI, who makes Amazon's Kindle display and most other e-reader displays. AUO recently purchased a major stake in Sipix, and is penned to launch e-reader modules. The display makers in East Asia are involved in development, as one would expect, but the display technology frontplane itself is being pioneered on a much more global basis, including spinouts from Philips (Liquavista) to start ups such as Ajjer (electrochromic) and Tred Displays.

Apple sold approximately 200,000 iPods in its first year of sales. It is reported that Amazon sold approximately 500,000 e-readers - the "Kindle" - in its first year of sales, and has since reported being sold out as it tries to keep up with demand. Amazon's Kindle is only one of more than 20 e-readers available, but it has been the most successful due to the wide range of content it supports. Amazon anticipates sales of 1 million Kindle units in 2009. In the first quarter of 2009, sales of e-book digital content for e-readers increased to $25 million from $15 million the previous quarter according to industry sources.
Others such as book store giant Barnes & Noble is rapidly getting involved too, opening what they claim is the world's largest e-book store online. They are supporting the Plastic Logic e-reader due to be launched in early 2010. The publishing industry, seeing its advertisement revenues steeply decline in recent years, is vying for new revenue models with e-readers.

IDTechEx forecasts show that the e-readers will dominate the use for e-paper displays over the next ten years by market value. That is followed by growth in signage, posters, point of sale (POS) and point of purchase (POP) displays, which require low power, flexible, easy to read displays. The scenario in 2014 is forecast as shown in the figure below. 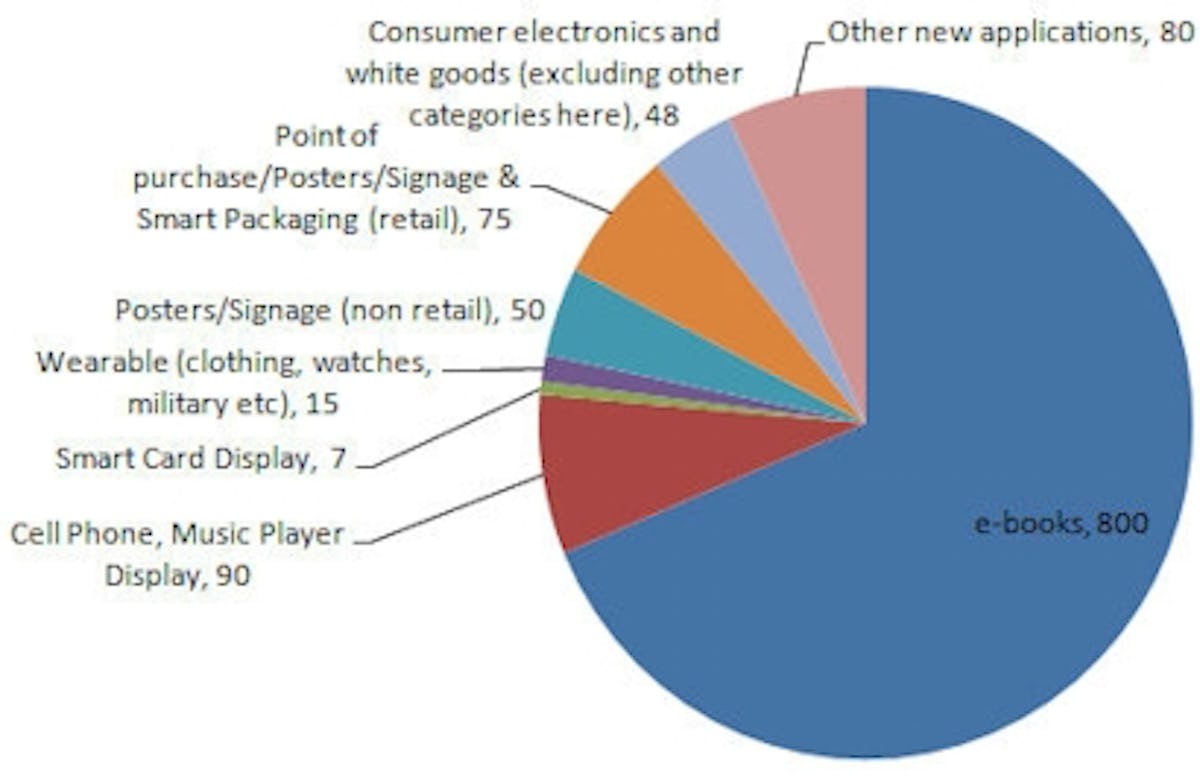 How big will the e-reader market become? When will e-paper displays be available in full color and when will the flexible versions reach the market? Which technologies will gain the biggest market share and which products will become popular with consumers in the next few years? Find out all about the projected market growth and overall penetration of e-paper display technologies in this new report from IDTechEx, E-Paper Displays: Markets, Forecasts, Technologies 2010-2020. A detailed appraisal of the markets is given along with forecasts by application type to 2020.
For more information, most of the companies mentioned in this article will be presenting at the annual IDTechEx Printed Electronics USA 2009 event in San Jose, CA on December 2-3.