Plastic solar for portable power and beyond

Polymer solar cells have been around for several years. They utilize organic compounds to produce electricity from sunlight making them more environmentally friendly and much cheaper to produce than traditional silicon-based solar cells. But they are ten times less efficient than the best single crystalline solar cells and their lifespan is ten times shorter.
Lifetime and efficiency is expected to improve drastically and high speed roll-to-roll printing of polymer solar cells may according to Risøs DTU, one of Europe's leading research laboratories in sustainable energy, potentially produce as many square meters of solar cells in an hour as a crystalline Silicon solar cell plant produces a year.

Whilst plastic solar cells are not being widely used to compete with fossil fuels yet, we are seeing an increasing number of companies using their technologies for powering portable electronics. The demand for portable power is increasing as new features are added to electronic devices such as mobile phones, laptops and mp3 players. For example we are now seeing cell phones that have other functions such as music, video and e-reading capabilities. Portable power will soon become a limiting factor and the ability to deliver longer battery life will be an important issue to the portable device manufacturers - plastic solar cells will contribute to setting the benchmark for battery life among these devices. 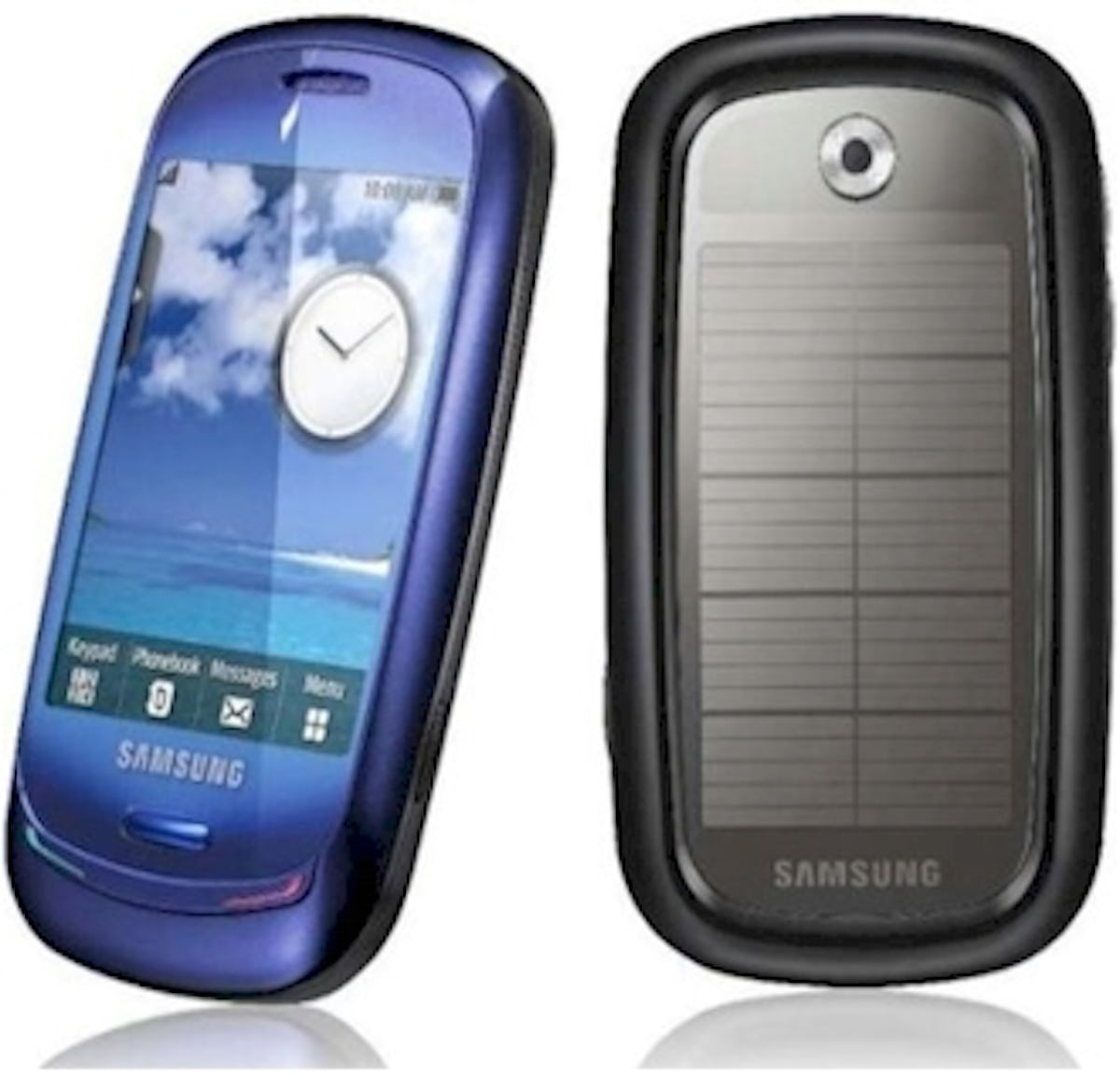 Source: www.goodcellphonereviews
Californian based Solarmer Energy is developing a plastic solar cell that is expected to achieve 8 percent efficiency and a lifetime of at least 3 years for portable electronics later this year. They claim to hold the world record for plastic solar cell and plastic solar panel efficiencies at 6.77% and 3.9% respectively.
They are targeting new consumer-electronics applications for its plastic solar panels, starting with cell phones and a charging-enabled laptop bag. They hope to boost this niche market with organic thin-film plastic that it claims can convert sunlight into electricity more efficiently than its competitors, with a lower manufacturing cost. Dina Lozofsky, vice president for strategic asset management at Solarmer, reportedly said, "The company expects to reach 4 percent efficiency by the time it launches its first product, with manufacturing costs of less than $1 per watt".

Plastic solar cells are now being incorporated into fabrics such as clothing and tents. Applications may include military uniforms to provide power for lighting, heating, and remote command technologies.
According to the Sunday Times, G24 Innovation is chasing contracts with camera-makers to put solar panels on to carrier bags and clothing to enable wearers to use the energy to, for example, charge up their mobile phones. In an interview early this year John Hartnett CE of G24i said they plan to sell their technology to the makers of other products such as tents, consumer electronics goods, clothing and even the US military.
US company SkyShades is incorporating Konarka's organic photovoltaic panels into umbrellas designed for outdoor seating areas in places like restaurants and bars. Patrons can recharge mobile devices such as laptops and cell phones from outlets built into the stem of the umbrella. The four-meter-wide Powerbrella can generate up to 128 watts of electricity, which charges a bank of batteries located in its base.
North Carolina State University designed a process to fit plastic solar panels to ties and jackets, and a solar blouse that will charge a cell phone has been developed in Japan. An American designer designed a solar powered bikini, which can supply 6.5 volts to charge up an iPod or keep a drink cold. 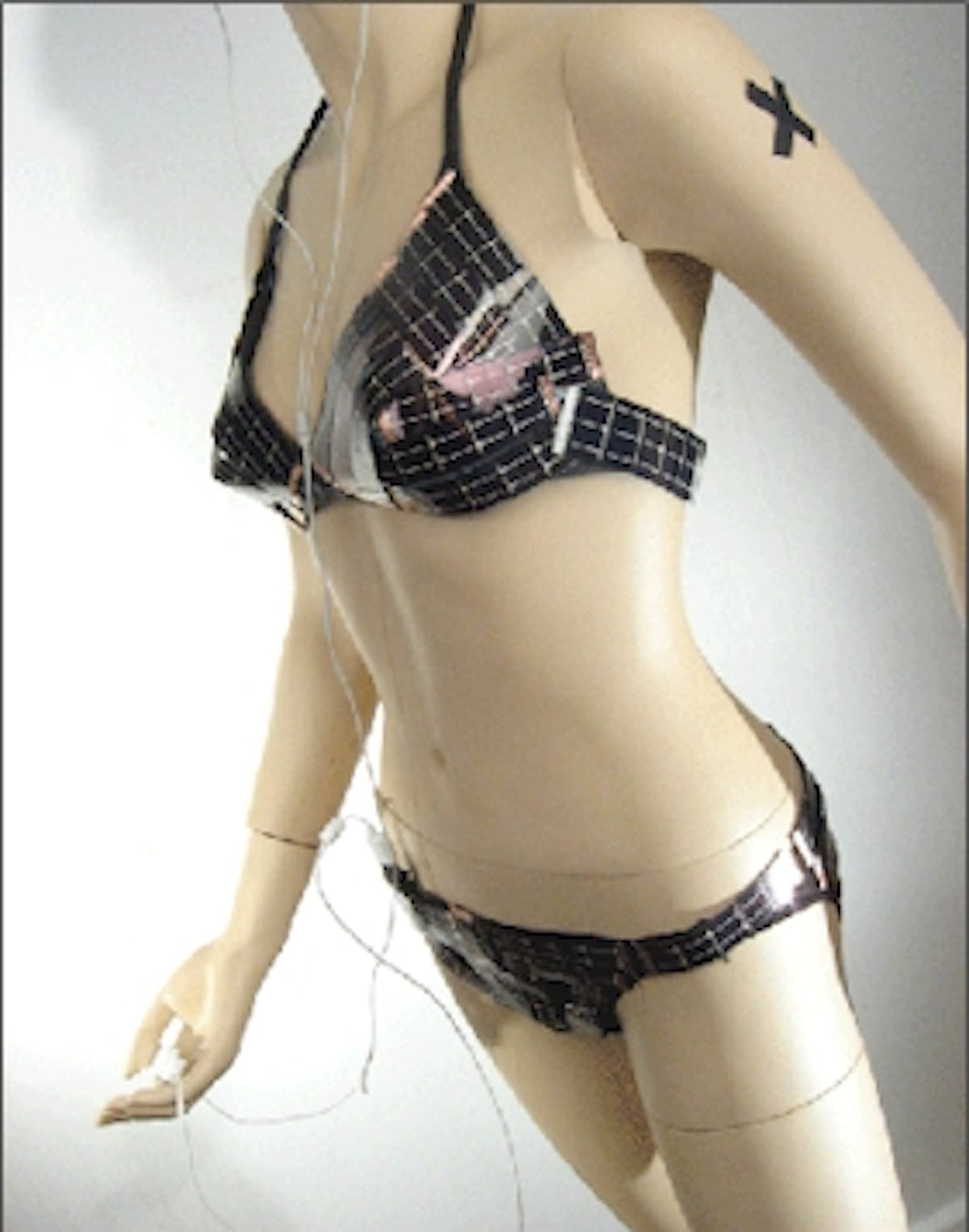 The dream continues to see plastic solar cells far beyond their portable electronic applications. Imagine a house or car covered and powered by flexible solar films. Many organizations are working to overcome some of the challenges of low efficiencies and durability. Australia's national science agency "Commonwealth Scientific and Industrial Research Organisation" (CSIRO) are working towards taking the mass production of cheap printed solar cells from research to rooftops as quickly as possible. They see cheap printed solar being mass produced in 4-5 years as a competing technology to traditional power.
In a bid to gain important new insights in the nanoscale structure of polymer solar cells and its effect on performance, the Eindhoven University of Technology and the University of Ulm have made the first high-resolution 3D images of the inside of a polymer solar cell. They created hybrid solar cells using a mixture of two different materials - a polymer and a metal oxide, which were used to create charges at their interface when the mixture was illuminated by the sun. They hope to increase their power conversion efficiency of 2% by creating polymers that can interact with the metal oxide and by developing polymers or molecules that absorb a larger part of the solar spectrum. At such point, the intrinsic advantages of hybrid polymer solar cells in terms of low cost and thermal stability of the nanoscale structure could be fully exploited.
A recent study by researchers at the UCLA Henry Samueli School of Engineering and Applied Science (partly funded by Solarmer) described how their new polymer solar cell reached 5.6 percent efficiency in the lab by substituting a silicon atom for carbon atom in the backbone of the polymer. This proves that the photovoltaic material they use on their solar cells is one of the most efficient based on a single-layer, low-band-gap polymer. At a lower band gap, the polymer solar cell can better utilize the solar spectrum, thereby absorbing more sunlight. At a higher band gap, light is not easily absorbed and can be wasted. The researchers hope to push the efficiency to over 10%.
Risø DTU is working to improve the durability, efficiency and production methods of plastic solar cells. Recently they demonstrated large polymer solar cell panels and are now planning for demonstrations on a scale that equals the total installed photovoltaic capacity in Denmark.
Researchers at Ohio State University are experimenting with polymer semiconductors, which could go a long way toward making polymer solar cells commercially viable. They discovered that adding tiny bits of silver to the plastic, boosts the materials' electrical current generation. They say that with the relatively low production cost of polymers compared to other solar cell materials, efficiency of 10% would be required to make a profit. One way to do that would be to expand the range of wavelengths that they absorb. Current polymers only absorb a small portion of the incident sunlight. The silver nanoparticles could boost the overall efficiency of virtually any kind of solar cell - those made from polymers or other semiconductor materials.
With the solar market currently worth $20 billion and predicted to grow by around 30% a year for the next decade clearly there will be an increase in research and development and more companies will enter the market to keep up with demand.
Printed Electronics & Photovoltaics USA 2009 and read Thin Film Photovoltaics & Batteries 2009-2029.