The first solar bus stop in Barcelona, Spain has been announced. The solar bus stop is a modular structure which is easy to install or relocate as it does not need any wiring, and the bus stop is totally self-sufficient, using its own energy resources to power information boards showing arrival times of buses. This information is updated every thirty seconds along with other useful related information and local advertising.
The Entitat Metropolitana del Transport (EMT) hopes to install 100 solar bus stops in 18 suburbs during the course of 2009. The solar bus stop is a collaboration between the Istituto Europeo di Design of Barcelona, and Capmar S.L., together with the EMT and under the direction of the Investigation + Education (I+ ED) department of Barcelona.
The design is based on a structure of two tubular columns of iron with a height of 3.5m and a width of 67cm. The top of the bus stop holds a photovoltaic panel measuring 67 x 72 cm that generates enough energy to keep the solar bus stop functioning for about two and a half days without sun. The system consumes only 72 watts a day to power the information panels and a night light. 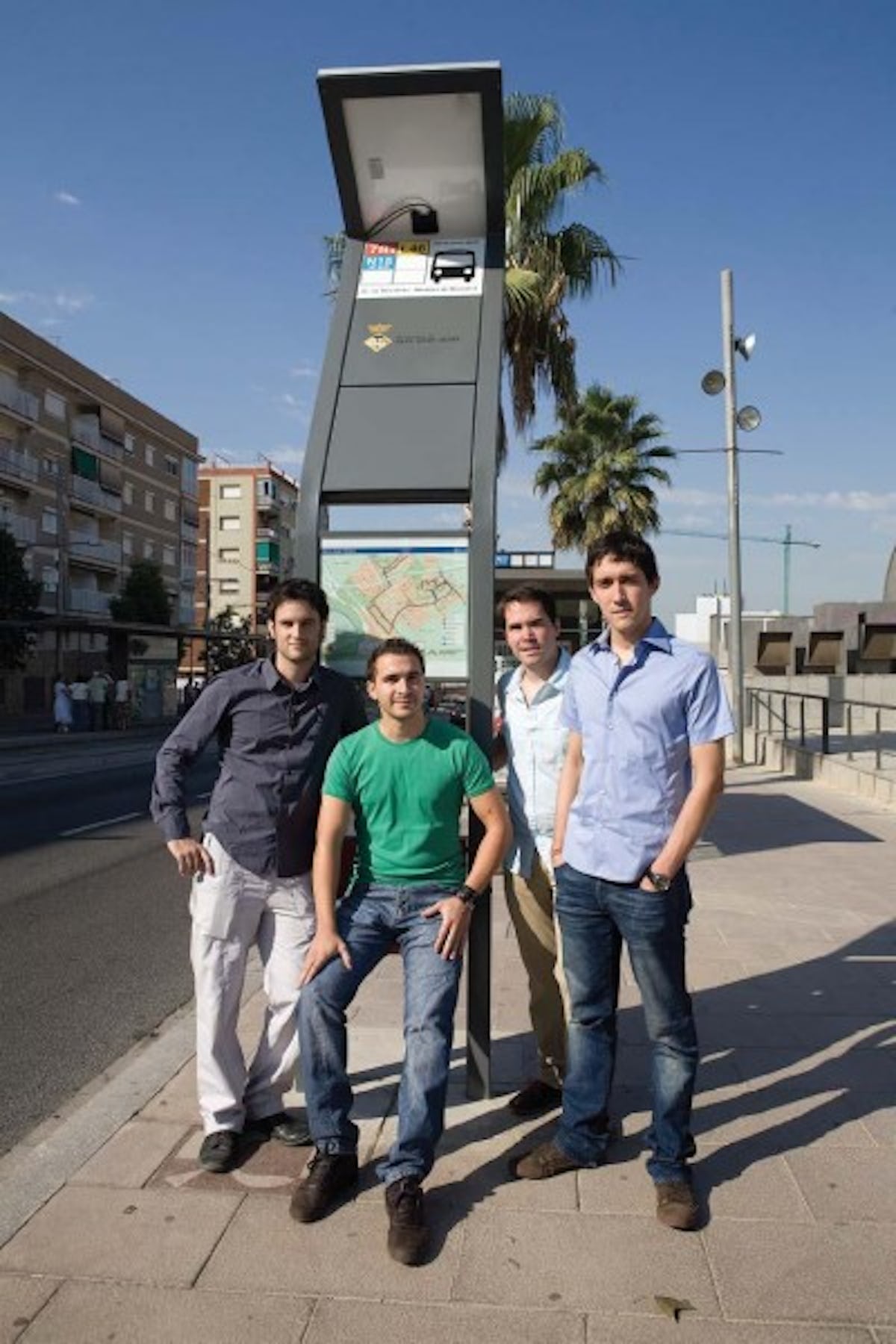 The designers at the solar bus stop in Barcelona. Source: IED
The first of a potential 1100 solar powered bus stops in San Francisco, USA, was also unveiled earlier this year. The design allows for excess power to be sent back to the grid as well as powering the bus information displays and the bus stop also offers free wi-fi access for waiting passengers. The bus stops were designed by Lundberg Design and contracted through Clear Channel. 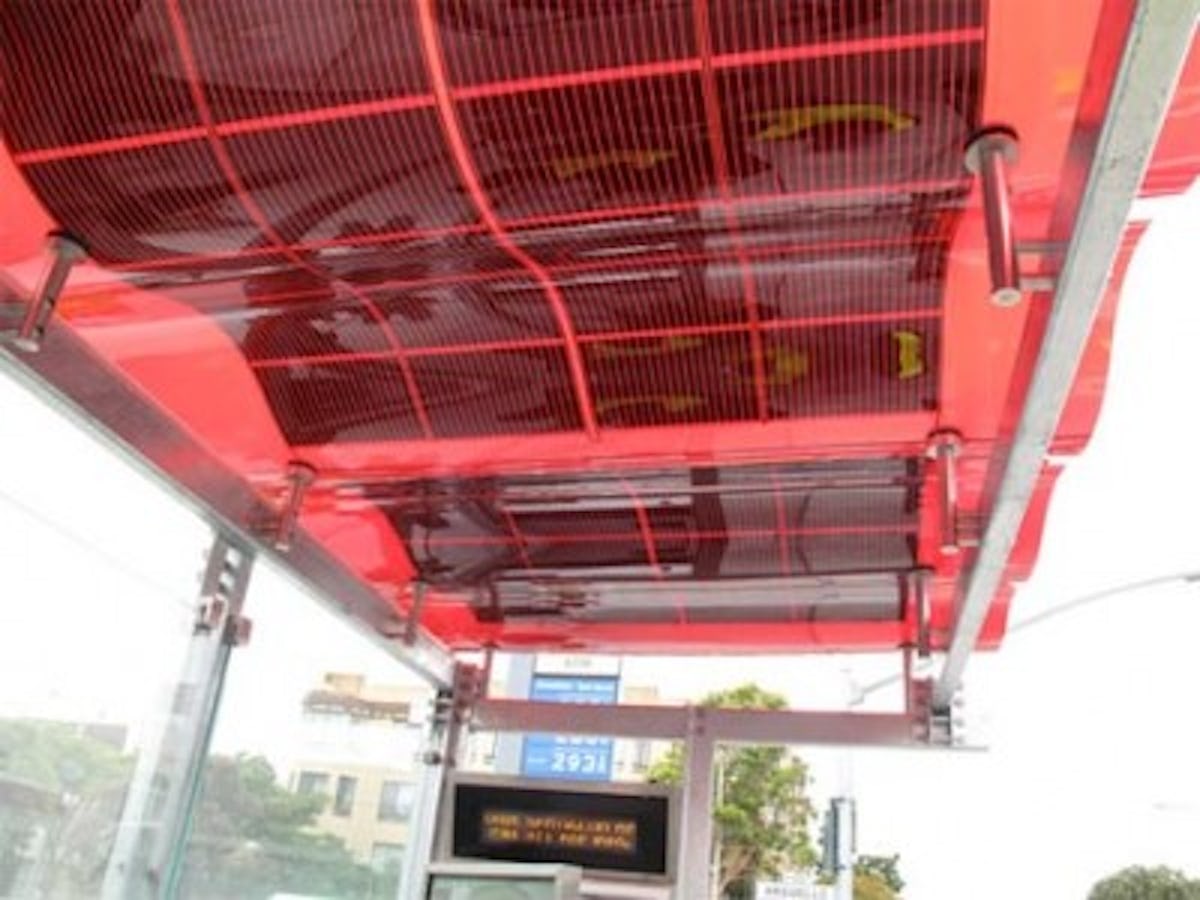 Solar bus stop in San Francisco, source Treehugger
Improving the diversity of solar bus stops is the MIT SENSEable City Lab architects and engineers who have unveiled a design for a solar powered bus stop named EyeStop in Florence, Italy. In addition to displaying information, the bus stop powers itself through sunlight. The EyeStop is partially covered with touch-sensitive e-INK and screens, and features state-of-the art sensing technologies and a variety of interactive services. Passengers can plan a bus trip on an interactive map, surf the Web, monitor their real-time exposure to pollutants and use their mobile devices as an interface with the bus shelter. They can also post ads and community announcements to an electronic bulletin board at the bus stop. The EyeStop will glow at different levels of intensity to signal the distance of an approaching bus. 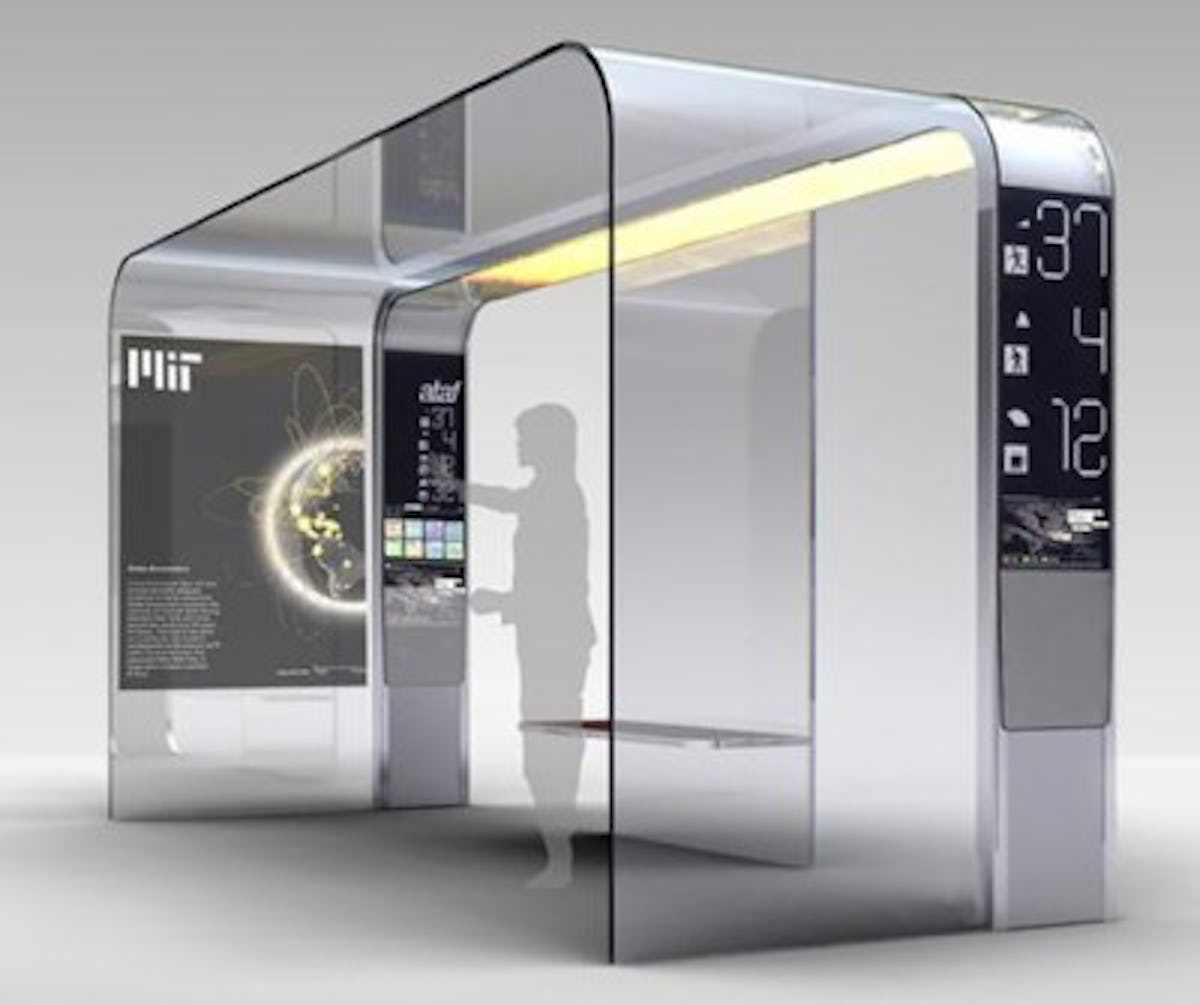 EyeStop, source MIT
EyeStop is designed to fit the physical characteristics of its surroundings. A computer program generates a unique design for each bus stop, providing both optimal sheltering for users and maximum sunlight exposure for power generation.
Although members of the public are wary of vandalism of these solar bus stops, it is hoped that materials used will have stronger resistance to graffiti.
Top image source: San Francisco solar bus stop roof by Mike Chino and Ryan Hughes
For more attend: Energy Harvesting & Storage USA 2009
Also read: Energy Harvesting and Storage for Electronic Devices 2009-2019