Thin films and nanotechnology for power

Electrical and electronic thin film technology increasingly involves printing, often for providing power to electronic and electrical devices.
Now, that even includes providing the power that moves a car along the road. Printed electronics and electrics will be a $335 billion business in twenty years, just for devices primarily made by printing with electronic inks. The IDTechEx projections for 2015 are summarised below.
Printed electronics global market in billions of dollars in 2015 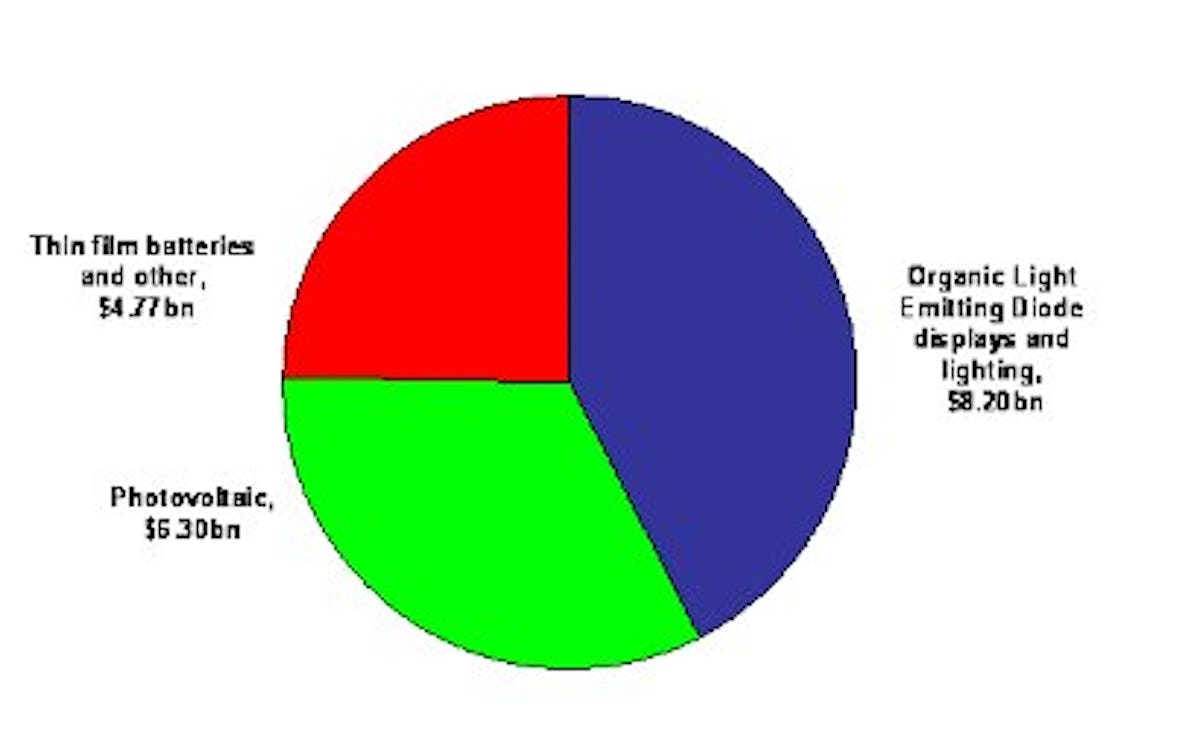 Source: IDTechEx report Printed, Organic & Flexible Electronics Forecasts, Players & Opportunities 2009-2029.
Beyond this are uses for thin film electronics in devices that are not primarily made in this way as yet. Traction batteries for cars are an example of this.

Lead acid batteries power off-road cars where poor performance is tolerable. The first generation of batteries for on road cars have had to be far better.
Hybrid car batteries need to tolerate one hundred to one thousand fast charges and discharges to electric motors daily. This relieves the internal combustion engine ICE of load changes. Nickel metal hydride batteries do this well. A smaller ICE can therefore be used, reducing fuel consumption, noise and pollution. In pure electric cars, the range has to be ten times that of a golf car, so even lighter, more compact batteries are essential, lithium batteries being the preferred solution because they are even lighter weight and smaller than nickel metal hydride.
Initially, the type of lithium battery used has been based on a cobalt cathode as employed in mobile phone and laptop batteries but these are not inherently chemically safe against overcharging or overheating. Sometimes manganese, aluminium and/or nickel are used with cobalt in that brew. Today, traction batteries for hybrids and pure electric cars rarely employ thin film technology for any part - anode, cathode, electrolyte or for the separator film that prevents them shorting when wound in the factory or distorted during use.

Second generation traction batteries are now beginning to appear, substantially based on thin film and nanotechnology and with the best environmental credentials of all.
It is a slow process because the testing and retesting typically takes five years and 300 man years of effort. These new traction batteries are lower in cost, use less polluting materials, are smaller and lighter in weight and, above all, are chemically safe against overcharging and overheating. They use cheaper manganese or iron phosphorous in the cathode and sometimes all three elements but no cobalt. The cathodes often employ nanotechnology.
Appropriate versions of second generation traction battery can even meet the hybrid duty cycle while offering size and weight gains over nickel metal hydride. They have better temperature performance, though not yet a cost advantage.
To obtain large surface area for faster more efficient reaction, nanotechnology is employed. For example, a new nanoparticle lithium phosphate cathode material has been developed at Massachusetts Institute of Technology in 2009 that permits exceptionally fast charging. Umicore will now produce it commercially and one battery manufacturer has already signed up to use it.
A new IDTechEx report, "Car Traction Batteries - The New Gold Rush 2010-2020" explains that following quick wins with cathode improvement, attention is turning to the other parts of the modern traction battery. For example, the separators are sometimes made using thin film technology and the anodes, traditionally graphite, are sometimes made by thin film technology using carbon nanotubes or nanoparticles or lithium titanate in nano form. Altairnano claims its nanotitanate electrode provides its second generation traction batteries with the best power and energy density and a record breaking guarantee of twelve years life.

However, many challenges remain including cost and performance below minus ten degrees centigrade. These will be overcome in the next few years.
Indeed, for lithium batteries, cost of manufacture will drop to one tenth of the figure for 2009, reaching a mere $200 per kWh in 2020. Affordable pure electric cars are on the way with up to 100 kWh in the battery providing hundreds of miles of range. Sion Power has joined with BASF to bring lithium sulfur, third generation traction batteries to market based on thin film carbon nanorod construction. 500 Wh/kg is envisaged - many times the figures for conventional lithium cobalt or nickel metal hydride.
By contrast, fuel cells have a less obvious place. They need constant load and a gas or liquid fuelling infrastructure like the ICE we wish to replace but, unlike ICE, that fuelling infrastructure is not even in place. Problems of cost, start up time etc remain intractable. At a recent traction battery conference in London, a researcher that had moved on from fuel cells said he thought of them, " in the way one thinks of one's last wife."

Actually, only half of the cost and knowhow in a car battery pack resides in the cells themselves. Traction battery packs contain control and safety electronics, air or liquid cooling and sometimes supercapacitors are in the battery pack to assist in fast charging and discharging. Even car traction batteries trickle charged at home need tolerance of fast charging. This is because regenerative braking when the car is in use requires fast charging capability.
Energy density vs power density of the different options 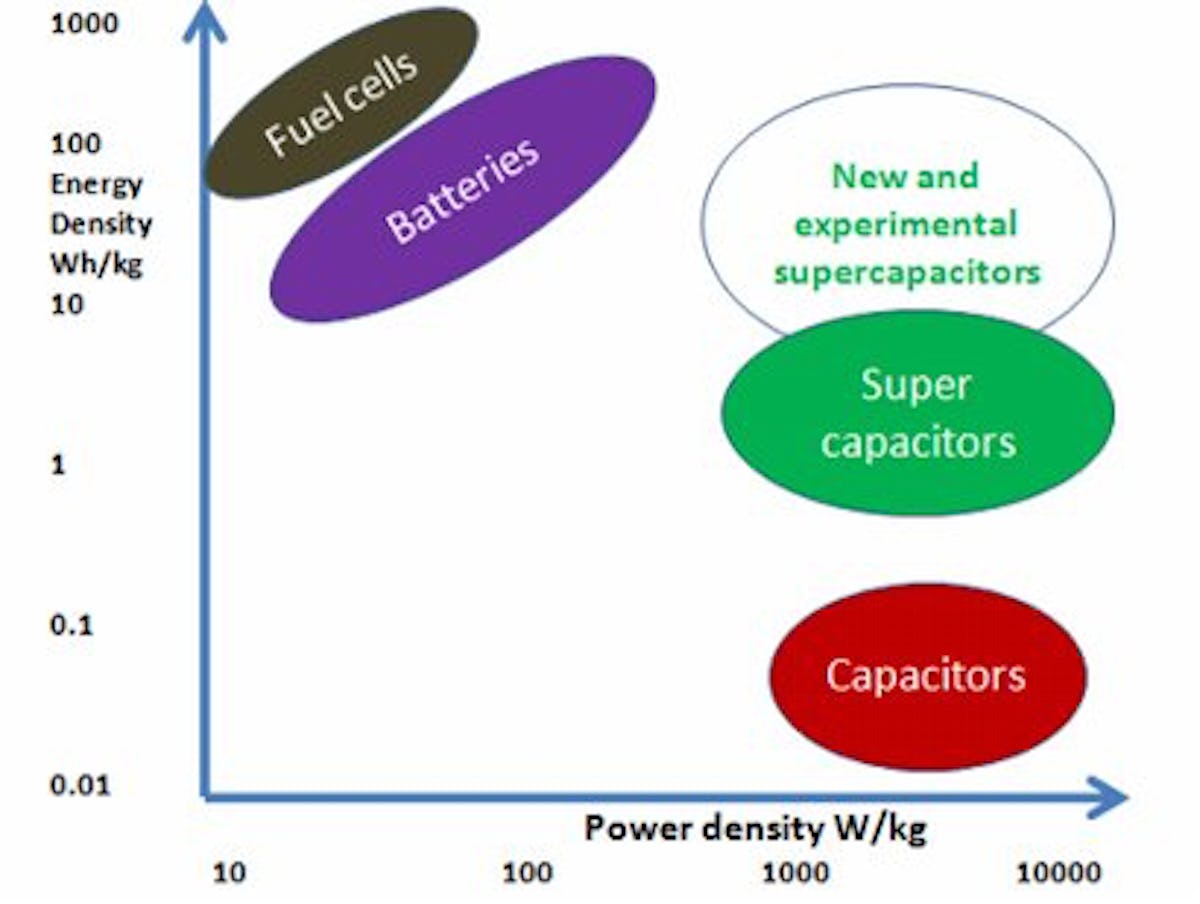 Source: IDTechEx report Batteries Supercapacitors, Alternative Storage for Portable Devices 2009-2019.
Supercapacitors have their own challenges of electrode and separator geometry and morphology and here again, nano carbon, carbon nanotubes and thin film technology are being brought to bear. For example, the University of Southern California recently announced an indium oxide nanowire/ carbon nanotube supercapacitor with a record energy density of 1.29 Wh/kg.

Devices that are half battery, half supercapacitor are also showing promise. They may give the best of both worlds - long life, smallest size and weight, performance at lowest temperature - even minus 30 degrees centigrade - and so on.

The helicopter view is that thin film and nanotechnology is providing new capabilities not just lower costs in electric and electronic devices. In electronics one sees the new memristors "the missing passive component", metamaterials and trillions of nantennas for light and heat harvesting that can only be made by using thin film technology.

IDTechEx reports, new in 2009, give the pros and cons, explain the chemistry and physics, and the market potential over the next ten years and profile many participants.
They include, Carbon Nanotubes and Graphene for Electronics Applications: Technologies, Players and Opportunities and Inorganic and Composite Printed Electronics.
The world's largest event on printed electronics Printed Electronics USA takes place in San Jose USA December 2009. Presenters include Nobel Prizewinner Sir Harold Kroto talking on Architecture in Nanospace, UCLA, Stanford University, Nantero and Canatu among those talking on carbon nanotubes, nine organisations covering the rapid rise of metal oxide printed electronics and Hitachi, Nanomas and Novacentrix showing how even inorganic printed electronics can now be created at room temperature. The new stretchable and invisible electronics are covered alongside various forms of printed power. Intel, Boeing, ST Ericsson, Xerox, Hewlett Packard, GE, DARPA, Kimberley Clark, P&G, MIT and many other famous organisations will present.
There will be an exhibition, masterclasses, visits to local centers of excellence in the subject, investment summit and a major session on the new photovoltaics.
For more information on this subject, please contact the author Peter Harrop at p.harrop@IDTechEx.com.
All reports can be purchased through www.IDTechEx.com/research or by contacting Raoul Escobar Franco at Raoul@IDTechEx.com.
Source top image: www.tekno.dk

Global warming continues to be a growing concern for scientists worldwide.