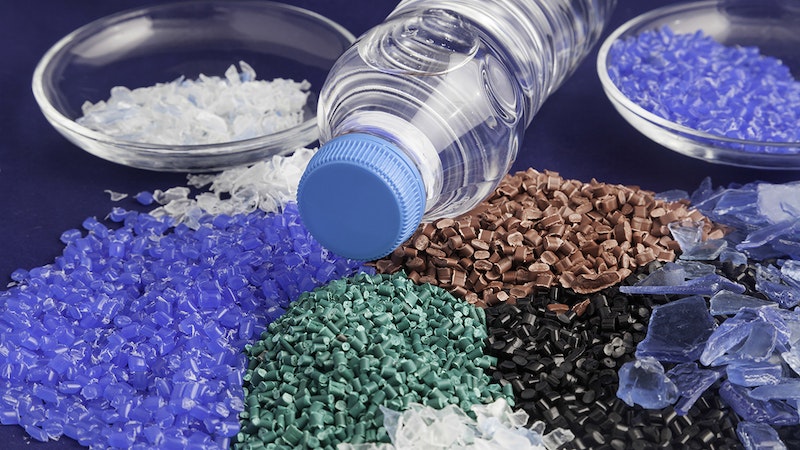 Plastic is everywhere. It's in supermarkets because it prevents your food from spoiling; it's lightweighting your cars because it's more synthesized; it's lining your frying pan because it's non-stick. It's in your workout gear because it wicks sweat from your back; it's in your cycling helmet because it absorbs the shock of an impact; it's in your medical devices because it can be sterilized. It's in your recycling bin because you have finished using it; it's in the trash because it can't be recycled, but at least the packaging says they're working on it; it's on its way to South East Asia because it can be repurposed into fresh plastic. It's piled up in bales because the recyclers don't have capacity; it's been landfilled instead because it's too contaminated to be recycled; it's leaked into the ocean because it has been dumped instead. It's on a TV documentary because animals are mistaking it for food; it's in your tap water because it has been ground into microplastics that can't be filtered out; it's in the air that you breathe because these particles were swept away by the wind. For more information please see the latest report from IDTechEx Research Green Technology and Polymer Recycling: Market Analysis 2020-2030.
Plastic is everywhere, and that is the problem. There is a huge drive to address the concerns that consumers and industry alike have regarding the longevity of plastic in the environment. However, there is no denying plastic has been a transformative material for modern humans: the range of polymers that have been synthesized offer properties that can stop food spoiling as quickly, allow us to go to space, and to create life-saving devices. So perhaps part of the problem with plastics is how we manage it after we're finished using it, because there are many applications of plastics that have only been made possible with this versatile material.
In the past few decades, scientists have become ever more creative in synthesizing new polymers, but waste management for this wonder material has not caught up. Mechanical recycling is fraught with challenges: societal and economic, as well as chemical. Even with the best will in the world, with a population who fastidiously cleans and separates their plastics from the rest of the trash, the truth of mechanical recycling is it is a downward cascade, outputting an ever poorer polymer until it can no longer be repurposed, and is landfilled or incinerated instead.
In spite of these daunting issues, there are several companies around the world who are rising to the challenge of what to do with managing plastics after they have reached the end of their useful life. Numerous polymer recycling innovations are starting to emerge, with improved physical recycling techniques such as solvent extraction, to chemical recycling techniques including pyrolysis where plastics are converted into fuels, and depolymerization, where polymers can be unzipped to reform the pure starting materials, ready to be made into plastic products again.
What are the advantages of each of these technologies? Which polymers are they compatible with? Who is developing them and how close are they to being commercially mature? These questions, along with a broader contextualization of the general polymer recycling market, are covered in the latest report from IDTechEx Green Technology and Polymer Recycling: Market Analysis 2020-2030 by Dr Bryony Core.