On December 10, the UK Knowledge Transfer Network had a meeting in Grove Oxfordshire on Emerging Display Technologies and Innovations. About 35 people attended.
Professor Ian Underwood of Edinburgh University in Scotland described work on microemissive OLED displays under the title "Hypoled - Next Generation Display Platform." He collaborates with German research institutes, start up Mobintech in Denmark and others.
The UK startup Micro Emissive Displays MED moved to Dresden then folded but startup MicroOLED in France and others are continuing the commercialisation of similar devices. He pointed out that cost, size and reliability can exceed that of conventional displays but quality has to be superb because any defects are greatly magnified.
Life is acceptable because these tiny displays are rigid. About 500 are generated from one slice. Dr Peter Harrop addressed the market structure and size for printed and potentially printed electronics, with emphasis on flexible displays. He noted the huge number of recent improvements in ac electroluminescent displays as their proponents successfully fill the market need that will be satisfied by flexible OLEDs when they finally become available with adequate life - a long wait.
Keith Rollins of Dupont Teijin Films the largest supplier of plastic film to the printed electronics industry described their capability. Chris Nice of Liquavista reported that his company has moved from making simple displays to seeking to license technology for the next generation of e-readers in the form of colour, video, flexible, active matrix displays.
These electrowetting displays are twice as efficient as LCD and can do the job that the Barnes and Noble e-reader currently does with two technologies - LCD and electrophoretic.
IDTechEx notes that, because the Liquavista product is not bistable, it will use more power than current e-readers for reading books in black and white - rather, it will create exciting new "up market" e-readers.
Combining display technologies is increasingly common such as E-Ink and ac electroluminescent street posters in Japan by Dai Nippon Printing and Toppan Printing. Citala combined their ac electroluminescent and Polymer Dispersed Liquid Crystal PDLC displays (essentially an electronic shutter over conventional printing) by working with EL leader, Rogers Corp - in this case to give superb day and night viewing.
Unlike E-Ink, Liquavista will let the backplane manufacture the front plane as well, rather than buy front plane film from them. Full colour capability may be three years away.
There are barrier layer challenges but the Liquavista products currently in the laboratory already exhibit temperature range and speed far superior to electrophoretics. Mono, colour filter reflective and single layer transflective versions have been demonstrated. Liquavista keeps a watching brief on the 180 million smart phones and the 21 million netbooks sold in 2009 because these are among the other possible applications for their technology.
Dr Adrian Geisow of Hewlett Packard noted that new devices such as e-readers have the display taking over 60% of the cost, 35% of the weight and a massive 80% of the power. He described how printed flexible construction can help using the HP Self Aligned Imprint Lithography SAIL, some colour passive matrix displays having already been demonstrated using this approach.
Professor Wayne Cranton of Nottingham Trent University took up the theme of flexible ac electroluminescent displays now advancing rapidly in function and sales.
IDTechEx had noted advances such as brighter white, better colours, wireless powering, more effects and so on and his contribution is brighter white by lateral transmission, called Light Emitting Thin Film Electroluminescence LETFEL which is sunlight readable. It involves laser processing to anneal the Mn doped ZnS phosphor without damaging the dielectric interface that produces the photons.
His other work is also very relevant to displays, including ink jettable antimony tin oxide transparent electrodes, though these are too resistive at 400 ohms/sq at present. He collaborates with Keeling & Walker and Printed Electronics Ltd on this. Direct laser patterning is another interest.
Professor Duncan Bruce of the University of York described work on new liquid crystal formulations serving as triplet emitters. Much of the original liquid crystal development was in the UK and the tradition continues.
James Dutson of Plasma Quest gave the first announcement of a breakthrough in RF sputtering - Extended Planar Plasma EPP - that provides 90% target utilisation and one meter web width, potentially increasing to three meters for reel to reel deposition. The unique type of sputtering practised by Plasma Quest not only permits room temperature deposition with great uniformity and control of stress but indium tin oxide ITO of half the traditional resistivity ie with 10 ohms/ square has been demonstrated for transparent electrodes.
Fund raising distributed to the printed electronics sectors since 2008 (in USD million) 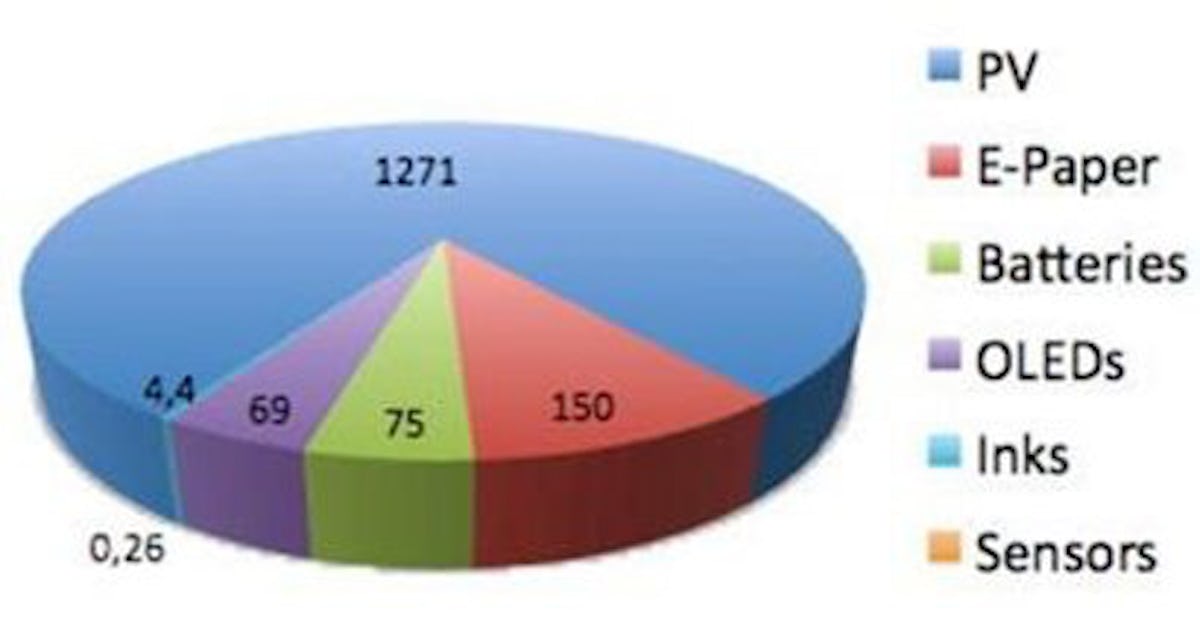