The RFID value chain is shown below. On the left, the chipmakers and material suppliers sell their goods to all comers. This is called horizontal marketing. For example, all the chipmakers are famous companies selling integrated circuits for many purposes and their RFID chips are only a small part of their business. The economics of chip factories and the very similar nature of RFID and non RFID chips dictates this. 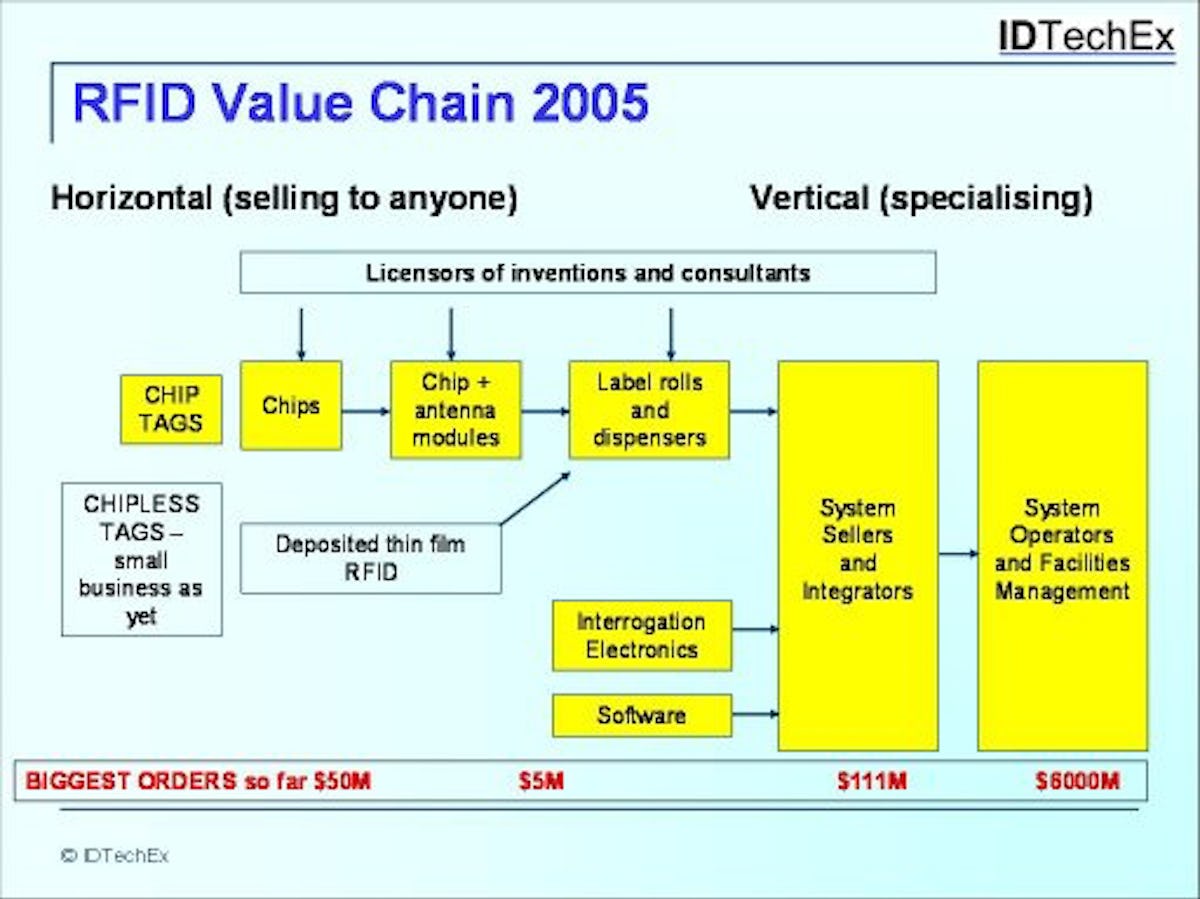 Source:IDTechEx
On the right, in classical fashion, the systems providers, integrators and operators and so on specialise in certain applicational sectors such as Savi Technology in military, Trenstar in beer kegs and TransCore in non-stop road tolling. In between, we have companies feeling their way in this immature business and trying various combinations of hardware, software and other options, neither fully positioned vertically nor horizontally.

Where the biggest orders are

Again, in classical fashion, the big RFID orders have always been in system provision, integration and/or facilities management, such as the $111 million order Savi landed from the US Military five years ago and several for tens of millions of dollars since. Other examples are the $1.6 billion order for card systems for travel on London's buses and trains in the UK, involving 17 years' facilities management. The consortium Transys landed that one. Then there is the $6 billion national identification card system for China that is being installed by a small number of Chinese companies.

Potential giants must migrate along the chain

What all this tells us is that, like barcodes and other disposable artefacts, making the artefact or interrogatory hardware is not a good end point if you have grand ambitions. The big money is in system supply, integration and management. For example, in barcodes, Symbol Technologies in barcode readers only landed orders for tens of millions of dollars when it added barcode system supply and integration to its skills.
Now we are seeing this all repeated with RFID as shown in the examples below. Companies in RFID are adding skills near the end of the value chain, ie where the big money lies, and companies outside RFID are entering thereabouts too. Much of this is quite recent. For example, Symbol bought Matrics last year. Alien bought Quatrotec and VeriSign bought R4 this year.

However, nothing is forever and the RFID industry is easily misread as something somnolent and slow changing just because that is what it has been for sixty years. For example, RFID tags with no silicon chip have been the exception - exactly the opposite of the situation with the antitheft tags. That will change, because to achieve the "tag everything" scenario in eg supermarkets calls for tags costing one cent or less and an increasing number of analysts and suppliers are realising that that may be impossible to achieve stably with silicon chip tags - ie with enduring profit for all in the tag supply chain.

Why tag making is no longer a sideshow

Why should this matter if the tags have been the subject of only modest orders so far? The answer to that is that, in the highest volumes such as trillions yearly for supermarket goods and hundreds of billions yearly for postal packages, the tag cost rises to 50% of total system cost of ownership and that is a big enough figure to interest those with the investment and ambition to become biggest in the RFID business. A change of strategy may be needed.
This is interesting because, although there are small operations equivalent to Matrics in the printed transistor business such as Plastic Logic, OrganicID, Kovio and ORFID, their opportunities and priorities are not necessarily mainly in RFID. The replacement for the silicon chip may become rather like the manufacture of silicon chips in being horizontal - sell to everyone and RFID is of no great significance on its own.

So far, we have been discussing the strategies of companies intending to be extremely large in RFID. However, to use the motoring comparison, in addition to those that create a secure and profitable future by being a Toyota, there are others that can be little Ferraris. Examples of this are Alanco Technologies tagging prisoners, Digital Angel tagging high risk patients, mother-baby tagging by X-tech, Connexion2 personal alarm locators that record incidents if bus drivers are attacked or Triteq tagging hot air balloons for ID on radar. IDTechEx keeps track of these and many others and its RFID Knowledgebase of over 1500 case studies of RFID in action, with technical details, is a good source of information. All require peculiar skills and industry knowledge of little interest to the big boys.
This is an extract from a recent article researched by IDTechEx. For the full article, read the June 2005 issue of Smart Labels Analyst.
To learn more attend the following conferences: