Plastic Logic's long awaited "QUE" pro-Reader was unveiled at the International Consumer Electronics Show in Las Vegas yesterday.
According to recent reports, the touch screen device with a 10.7-inch shatterproof display - the largest on the market, will be offered in two versions from mid April. The 4GB version has a capacity for 35,000 documents and can operate only using WiFi, and will cost $649.00 while the 8GB model at $799, like the Amazon Kindle will run on both WiFi and 3G networks from AT&T with no added monthly subscription.
Unlike other e-readers this device is being marketed to the business professional who needs to read rather than consumers who read for leisure. The pro-Reader is designed to be the size of a pad of paper and at about 1/3 inch thick, it weighs less than many periodicals. With the annotating feature, printing won't be necessary. Mobile professionals can look forward to a paperless briefcase, a lighter load, and a better way to work
QUE supports reading and annotating document formats such as PDF, Microsoft Office, ePub documents and more. You can also convert and transfer content from your PC, Mac™ computer, or BlackBerry® smartphone to your QUE.
If any - the biggest stumbling block for the company could be the price. But Richard Archuleta, CEO of Plastic Logic said in an earlier interview that the pricing works for the customers they we are targeting as it fits within the eco-system and the devices that they use for their personal and work information. Between a laptop and smartphone, QUE fills a gap where people print.
For the recreational readers, the QUE store powered by Barnes and Noble provides access to the largest eBookstore as well as many business and professional newspapers, books, and periodicals.
The company only announced yesterday further partnerships with some of the leading business publishers and publications, including the Dow Jones Company and the Wall Street Journal, Barron's, and All Things Digital, as well as Forbes and Fast Company. Rounding out new partnerships are the Sporting News and major regional newspapers, including the Sacramento Bee, Miami Herald, and San Jose Mercury News.
These publications join previously announced strategic partnerships with Financial Times, USA Today, the Detroit Free Press and Detroit News, MIT Technology Review, Popular Science, and IDG publication titles including CIO, Network World, and Computerworld. A full list of content partners can be found at www.PlasticLogic.com

.
Preorders are currently being taken at the QUE Store with shipment expected Mid-April. The e-reader will also be available at all Barnes and Noble stores in the US along side their Nook later this year. 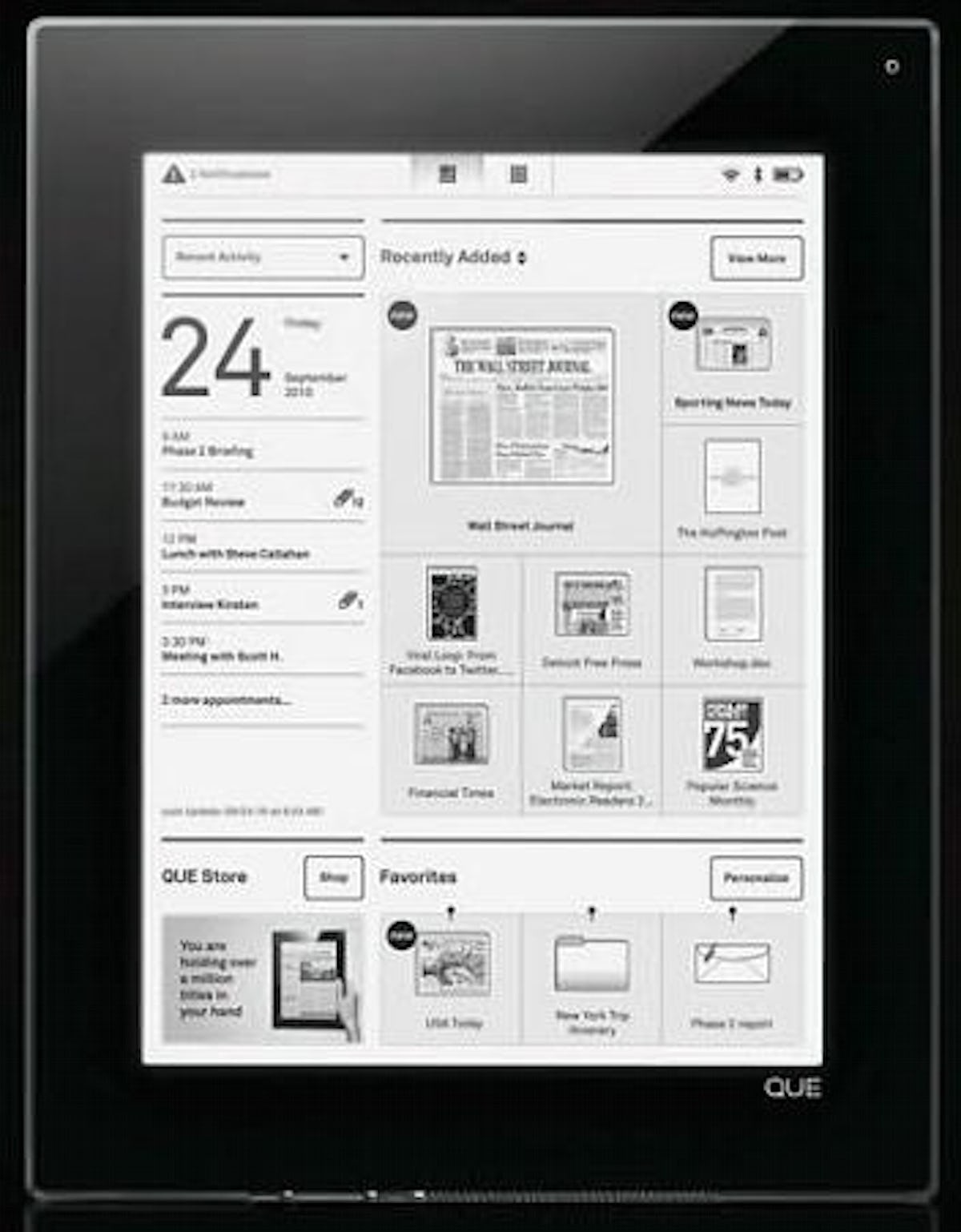 You can see the device in action on Youtube.
For more attend Printed Electronics Europe 2010.