When we consider potentially printed electronics and electrics, 2008 was definitely the year of the solar cell, primarily introduced to replace batteries and power stations. Interest in renewables coupled with incentives in countries like Germany and Spain in Europe, which accounted for 73% of the overall installations, led to worldwide installations reaching 5.95 GW. This peak reached in 2008 was followed by the worldwide economic slowdown and, more specifically for the PV sector, a cap in the amount of installations in Spain. 2.46 GW was installed in Spain in 2008 but a cap of 0.5 GW was established in 2009 that left almost 2GW of capacity with nowhere to go. 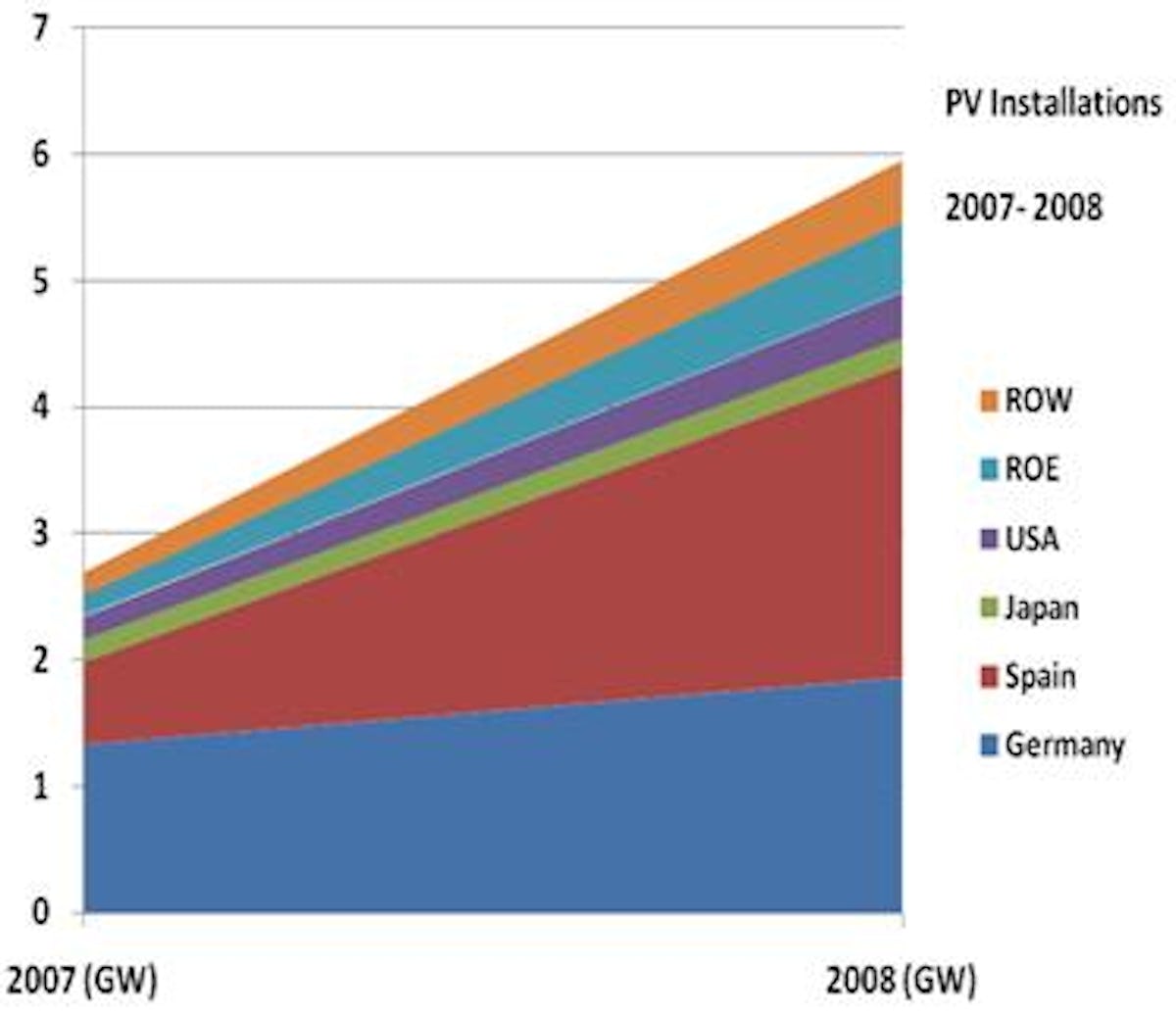 Worldwide PV installations, growth between 2007 and 2008
This slow down will lead to a reduced capacity utilizations that will continue from 2009 into 2010 but by 2011, the market will start recovering from recession with significant help from sustainable energy production targets set from countries worldwide.

2009 is marked by the success and growth of the e-book reader market. These devices employ an increasing amount of printing of electronics to replace conventional printing. The Amazon Kindle paved the way for making these devices popular, especially in the USA. The ease of download and their Wi-Fi functionality, along with the large amount of available content made the Kindle an unprecedented success, having sold approximately 500,000 devices in 2008 (for comparison, the iPod sold 378,000 pieces in its first year of availability).
In 2009, more than 30 e-book readers became available on the market, marking an unprecedented interest in the devices both by startups, such as E-Ink, the company that is making the display for most of these readers, as well as companies such as SONY, Bridgestone, or Prime View International, a semiconductor company that eventually became the parent company of E-Ink and is aiming to remain the leader in the industry. 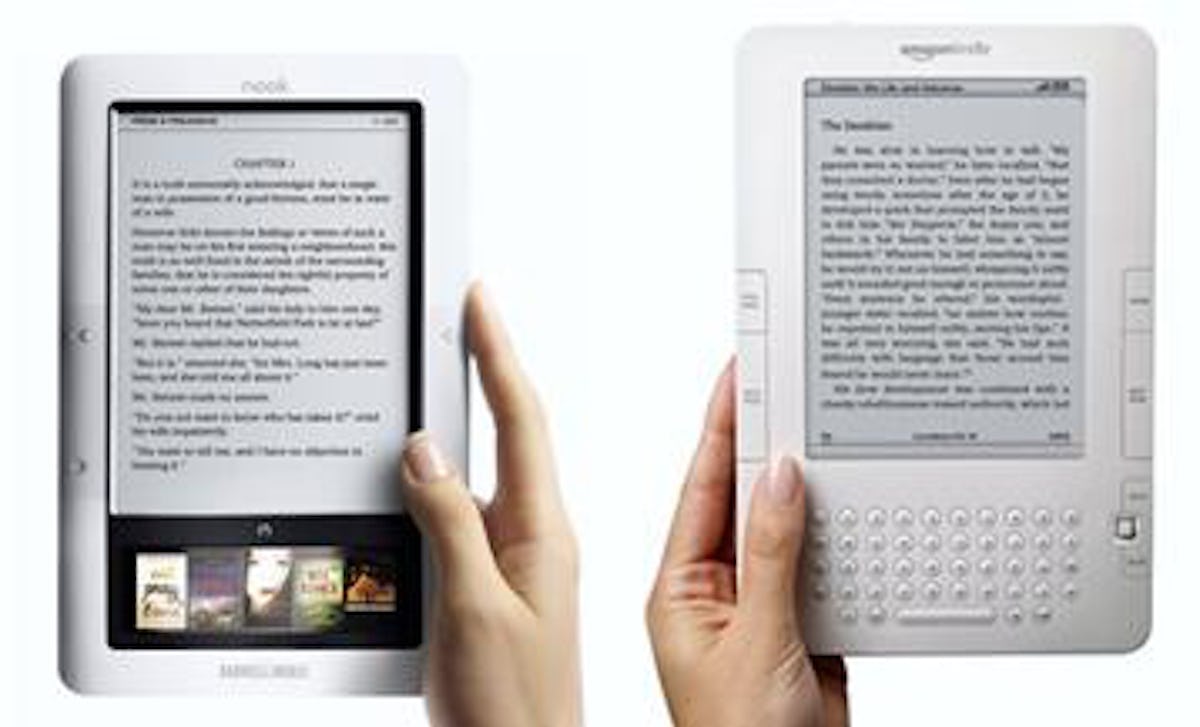 The Nook™ versus the Kindle™
Bookstores and printed media publishers are quickly catching on. The way people read is rapidly changing and so are newspapers, magazines and books. An interesting example of this evolutionary process is the new e-book reader device from Barnes & Noble, and the company's endorsement of the Que™, the businessman's e-book reader device from startup Plastic Logic. Publishers are beginning to realize the change in the market and are prepared to differentiate their product range in order to retain their share.

2010 will be the year we witness further major OLED penetration, initially with rigid ones made by vacuum processes, precursors of the flexible printed versions that will follow. Indeed the printed versions will see some useful initial sales, particularly in the form of lighting. Following superb OLED mobile phones, Samsung is promising laptops with OLED screens by the 3rd quarter of 2010 and already at the end of 2009, OSRAM had introduced its first OLED lighting product: The ORBEOS is the first OLED light source for premium quality functional lighting. With a diameter of 80mm and at only 2.1mm thick, this surface emitting lighting panel only weighs 24g, has an efficiency of 25lm/W and a lifetime of approximately 5,000 hrs. Due to its high price, the ORBEOS would initially be suitable for high-end applications and niche interior design applications.
Lower prices in the future will lead to further growth and adoption for a wider range of applications. 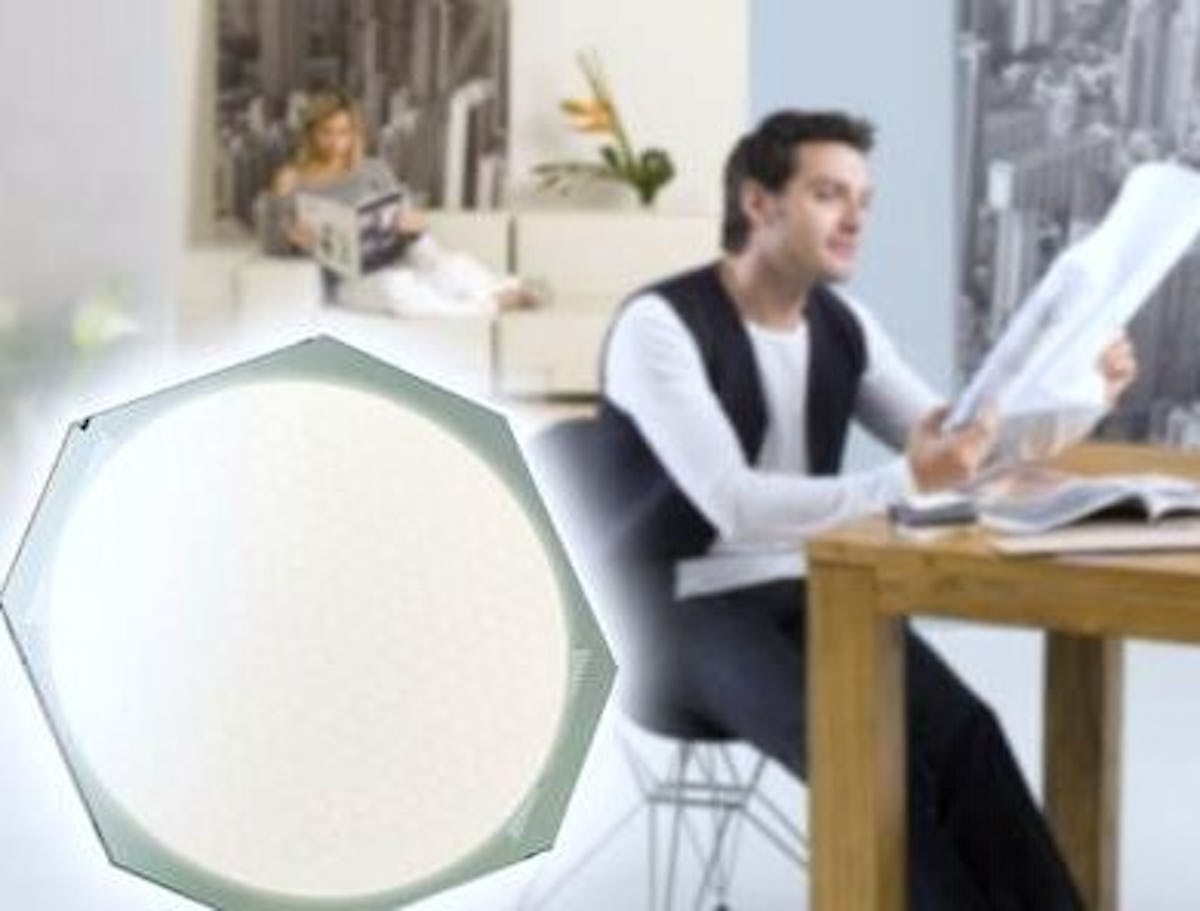 The ORBEOS from OSRAM
More work on roll to roll processing along with further developments of flexible barriers and adhesives will also see further developments of flexible versions of OLEDs as well as longer life flexible organic photovoltaics.
DNP in Japan announced at the end of 2009 the development of an ultra-impermeable plastic film substrate with a water vapor transmission rate of only 10-7 g/m2/day, an achievement in performance that was made possible by improving the cleanliness of their manufacturing processes and precisely controlling vacuum processing.
The next IDTechEx Printed Electronics / Photovoltaics Europe 2009 conference in Dresden on the 13th and 14th of April will be a useful event to reveal trends and advances within the previously mentioned industries and will give insight in the growth of the market for innovative electronics.
Photovoltaics are on the rebound, with renewed interest in portable power opening up new markets other than rooftop installations and solar farms, a move that's backed from a variety of industries, from the portable electronics to the automotive sector. Large consumer goods companies are researching the possibilities of electronic functionality where it hasn't been previously seen and the suppliers are at the point where they are ready to offer new materials and new products into these markets - On hold then, waiting to discover what the application of 2010 is going to be.
For more information on this topic, please contact the author Dr. Harry Zervos at h.zervos@IDTechEx.com.
For missing images or details on the conference, contact Cara Van Heest at c.vanheest@IDTechEx.com.
Upcoming Events:
Printed Electronics EUROPE 2010, April 13-14, Dresden, Germany www.IDTechEx.com/peEUROPE.
Photovoltaics EUROPE 2010, April 13-14, Dresden, Germany www.IDTechEx.com/pvEUROPE.
Energy Harvesting EUROPE 2010, Munich, Germany.