The glamorous world of energy harvesting

Energy harvesting is the use of ambient energy to create electricity for small or mobile equipment and it started with such things as the bicycle dynamo and the piezoelectric gas lighter. Then things got exciting with solar cells "photovoltaics" on space vehicles and now scarcely a week goes by without the announcement of a startling new advance that is enabled or assisted by energy harvesting. It is now the stuff of world records and designer products selling at high prices or in large numbers. The electrodynamic harvesting of that bicycle dynamo has transmogrified into disco floors that drive the lights, as in Club Surya in the UK and in other new locations.

The new cars that accelerate faster than a Ferrari or Porsche and record breaking motorcycles all rely on electrodynamic regenerative braking with the electric motors that provide that leap in performance. An example is the new hybrid electric Frazer Nash Namir in the UK, which is in some contrast to the sports cars made under that famous name 90 years ago. Top speed is 187 mph and 0-62 mph acceleration in 3.5 seconds while still managing up to 91.7 mpg (US).
Frazer Nash Namir 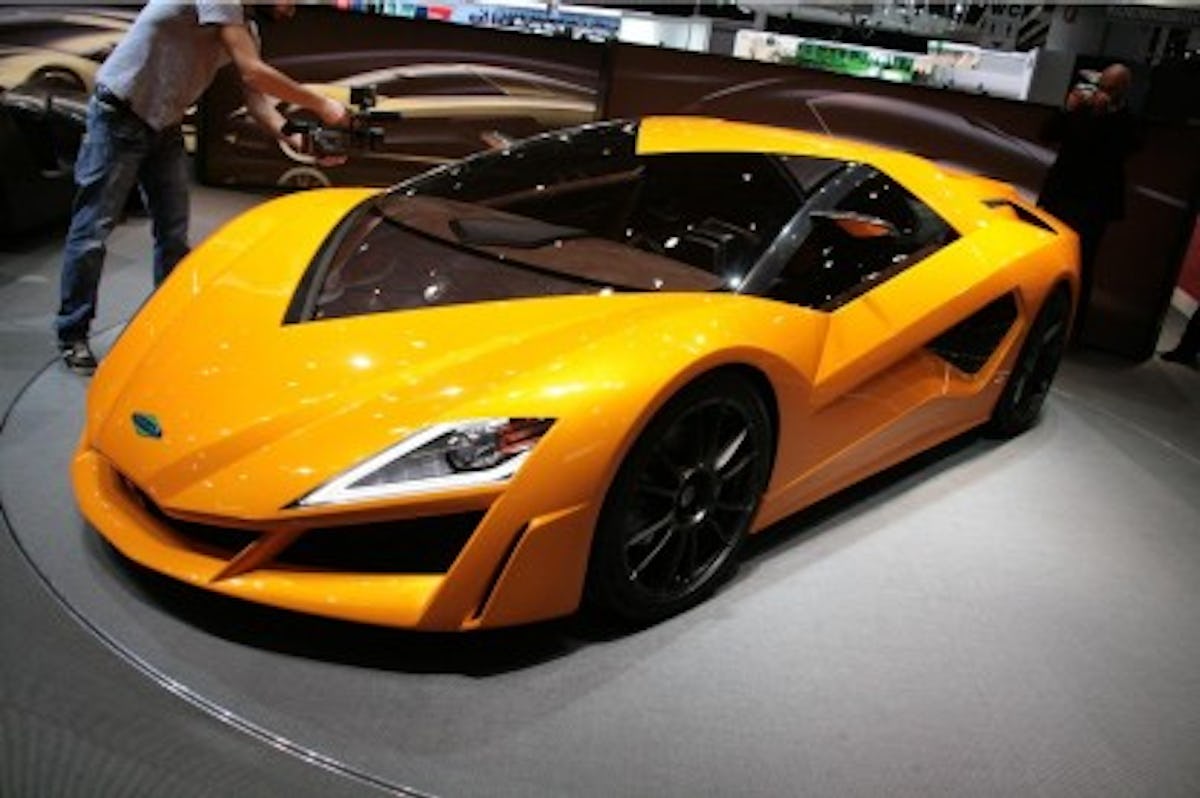 Source Frazer Nash
Massachusetts Institute of Technology has developed shock absorbers that also harvest energy electrodynamically and many cars are hitting the market in 2010 with a solar roof, the most popular being the plug in Prius from Toyota. Indeed, the all electric Pininfarina Bolloré Bluecar, new in 2010, has solar panels on both roof and hood.
Pininfarina Bolloré Bluecar showing solar panels on roof and hood 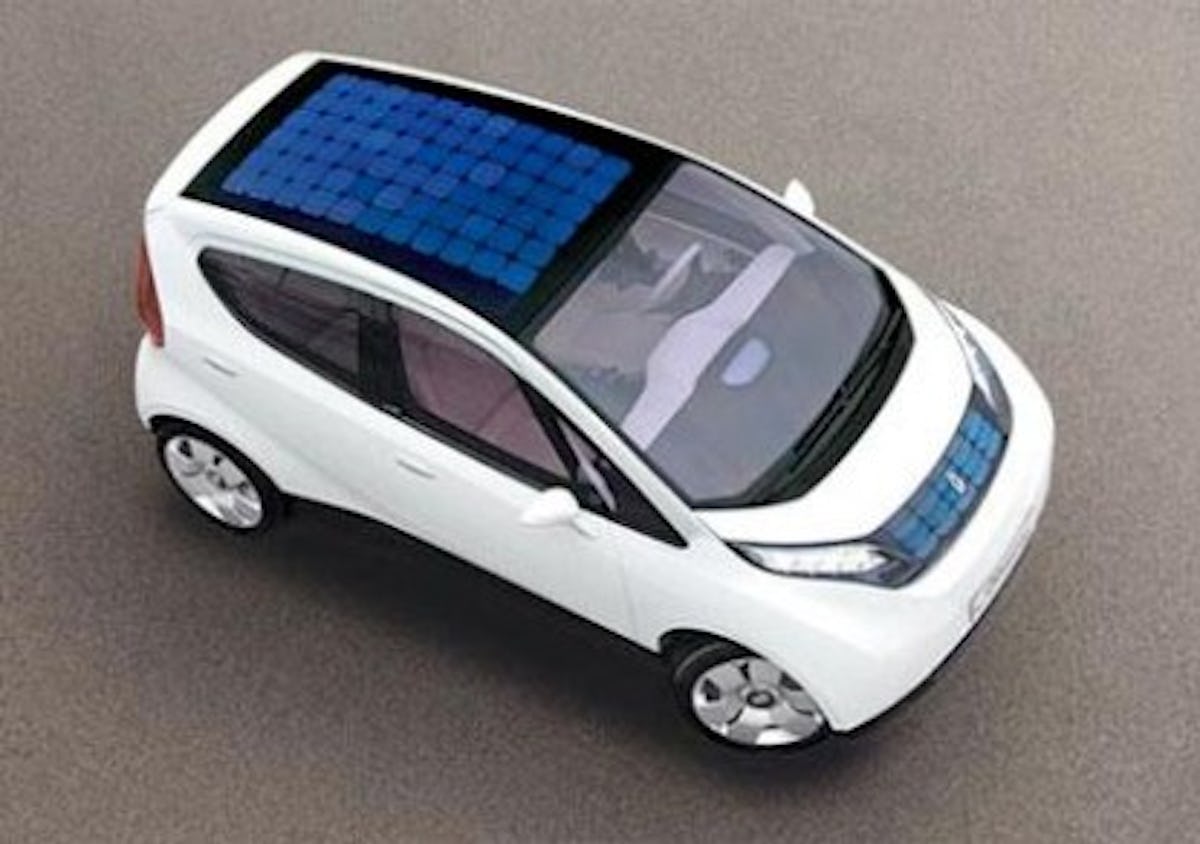 Source Pininfarina Bolloré
The Automotive Thermoelectric Generator ATEG will be fitted to commercial BMW cars, including hybrids, from 2012, harvesting heat from the engine and exhaust. Later they will be used on the electric motors and traction batteries of cars and other vehicles because these get hot as well. Indeed these are often air or water cooled at present, with that heat wasted. A traction battery allowed to go over 50C is detroying itself. 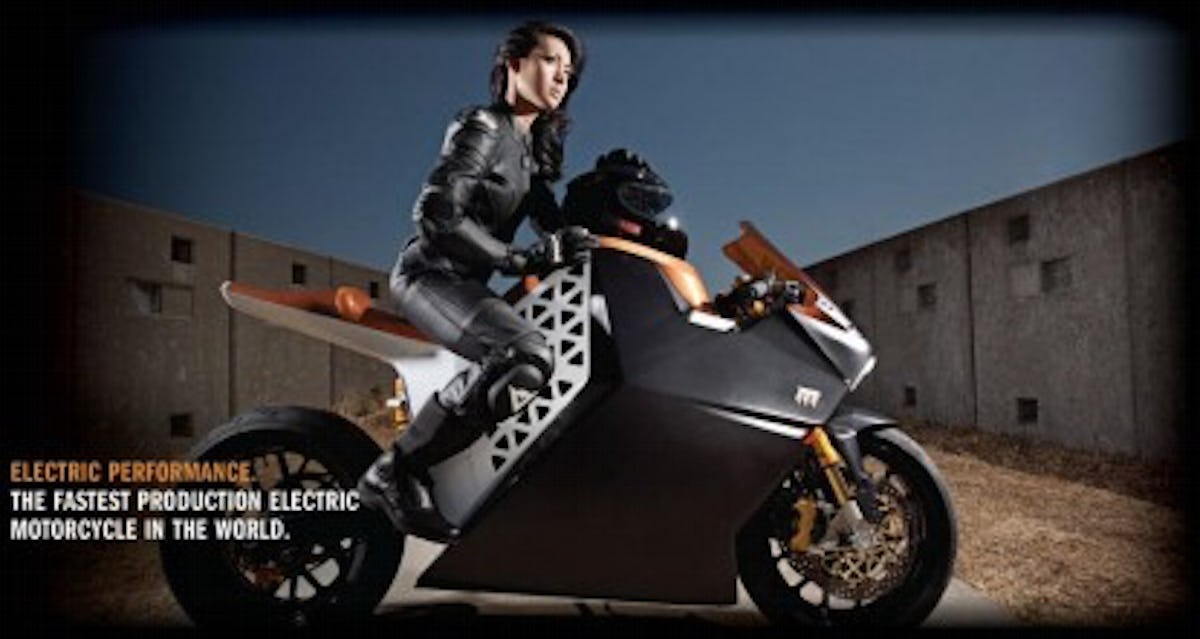 Source Mission Motors
Other electric motorcycles do even better but they are not in production.

About twenty watchmakers now sell watches relying on photovoltaics or electrodynamics ("Kinetic"). This means that the owner rarely, if ever, replaces a battery. The Citizen EcoDrive range is an example.
The Citizen EcoDrive solar powered wristwatch 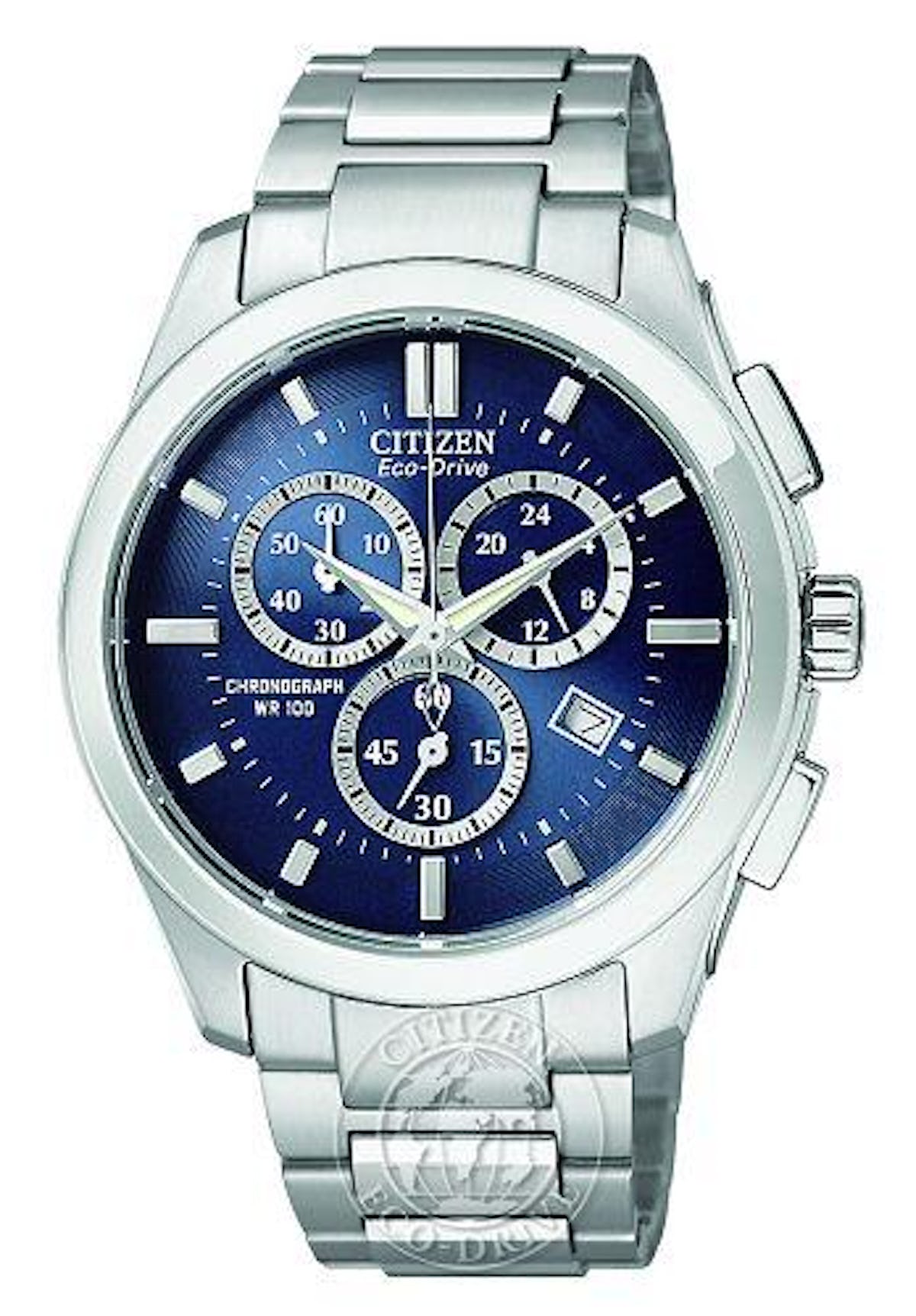 Out at sea, remarkable things are happening even before the US Navy's electrically driven surveillance jellyfish or the US Army's surveillance bats are fully deployed, with their multiple energy harvesting. The EnOcean Alliance of companies, making interchangeable devices based on energy harvesting, has the strapline No wires, No hassle, No Limits because their light switches, thermostats, motors for drapes and so on all operate without ac mains power or batteries, sending signals to each other - even two way signals -powered by mainly electrodynamic, a lot of photovoltaic and a small amount of thermoelectric energy harvesting. For example, a flexible, individual EnOcean lighting system has been installed in an Italian Ferretti motor yacht in Brazil, saving space, cost and maintenance.
Ferretti motor yacht 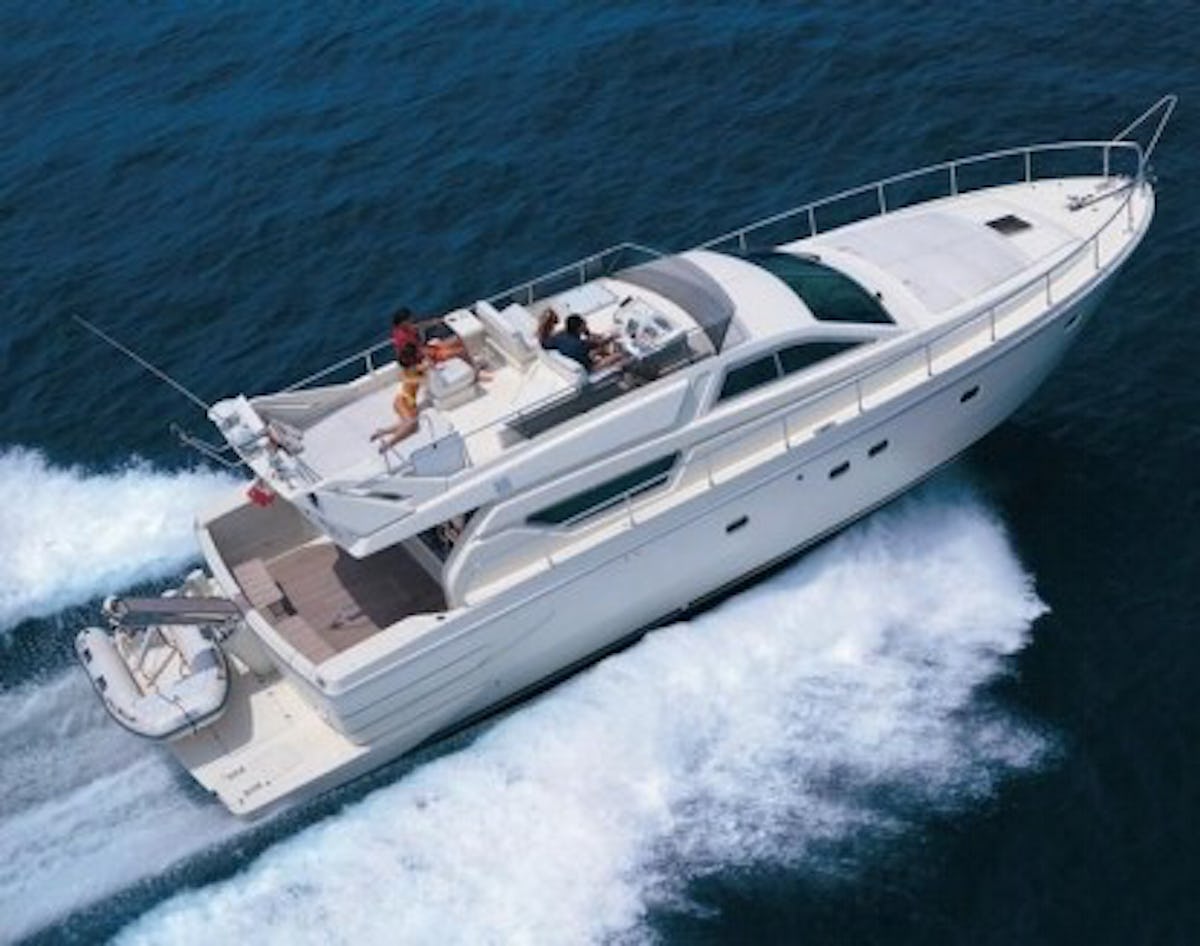 Another marine topic now receiving close attention is Autonomous Underwater Vehicles AUVs of the type called "gliders". Often the size of a surf board, some can stay at sea for years, coming to the surface to charge their batteries by wave and solar power. They can hold position and travel slowly to chosen destinations and they are used for a huge number of purposes from monitoring sea condition, pollution, whales and fish stocks to military and oil industry services. The Liquid Robotics Inc Wave Glider is shown below.
Two types of Wave Glider AUV 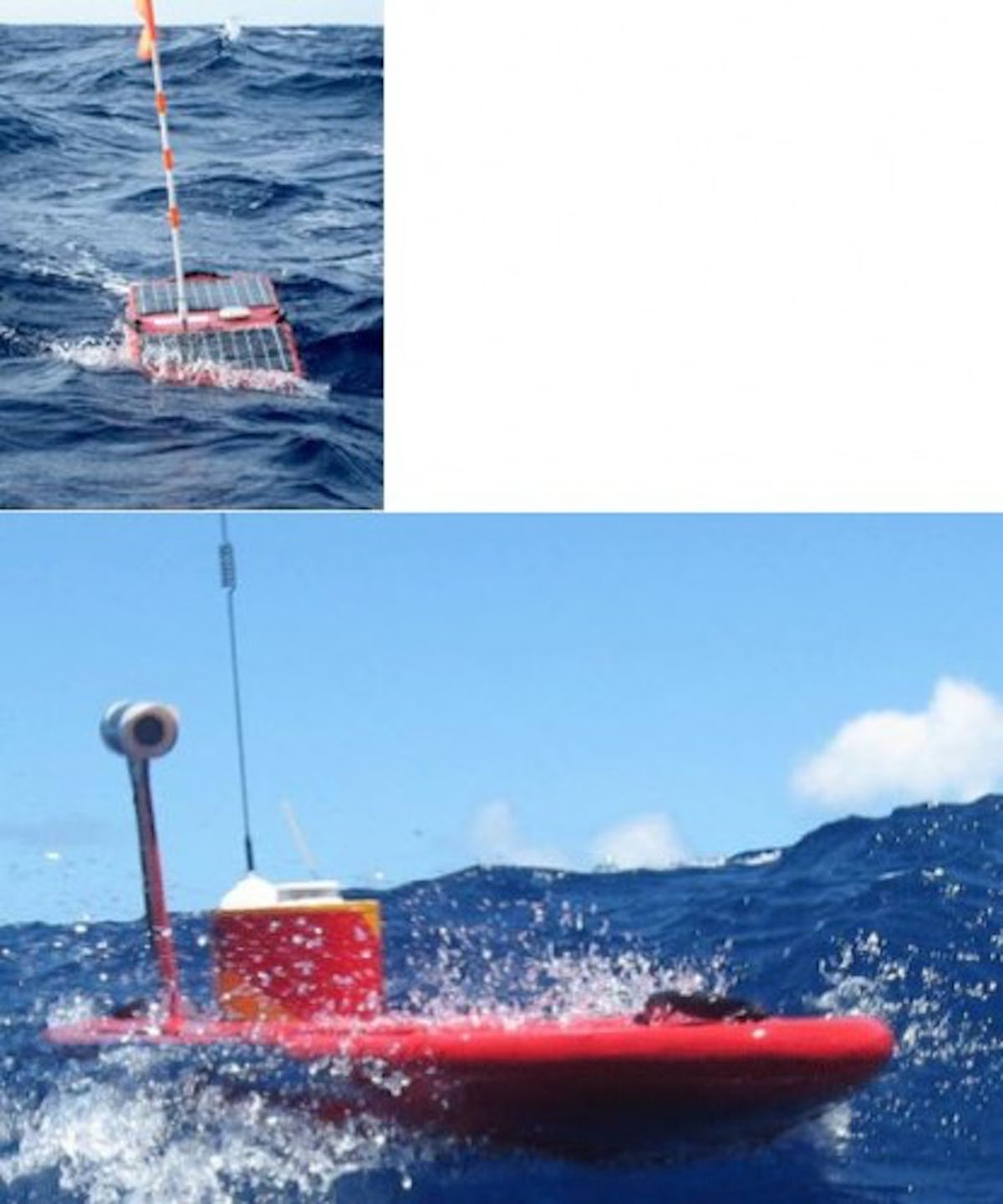 Wave glider is a configurable platform designed to support a wide variety of sensor payloads. It can keep station or travel from point to point. Data is transmitted to shore via satellite, and the continuous surface presence means data can be delivered as it is collected. Its unique two-part architecture and wing system directly converts wave motion into thrust allowing the Wave Glider to travel long distances, hold station, and patrol vast areas without ever needing to refuel.

Wave Gliders can travel to a distant area, collect data, and return for maintenance without ever requiring a ship to leave port. Payload power is provided by two solar panels, lithium-ion batteries and a charging optimisation system. This is a surface vehicle that can station-keep, one mode being to operate in a small watch circle, so it is suitable to replace a buoy out in the middle of an ocean.
Justin Manley of Liquid Robotics points out that, "This thing can do the same job but it is a lot cheaper and unlike a big buoy it doesn't need a big ship to go out and fix it. The world has also been talking about fleets of unmanned vehicles that will work together - a network of robots - for a while now. Obviously, any undersea component is going to need a surface element to reach satellites for communication and the connection to the Internet that we all rely on. Because the Wave Glider has essentially an infinite endurance, I think this could become the equivalent of a cellular phone tower in the ocean for underwater vehicles." He adds, "A major science question with ocean acidification has to do with the flux of carbon dioxide between the atmosphere and the ocean. The way to start learning about this is if we could acquire lots of measurements of carbon dioxide levels just above and below the water surface over large areas. This is the platform that will enable that type of scientific programme."

Aerovironment has long made solar driven electric aircraft for the US Military. Swiss scientist-adventurer and pilot Bertrand Piccard unveiled the 'Solar Impulse' airplane during a ceremony in June 2009 in Duebendorf near Zurich Switzerland. This solar-powered plane will demonstrate that reliance on renewable energy is not a pipedream. He declared, "If an aircraft is able to fly day and night without fuel, propelled solely by solar energy, let no one come and claim that it is impossible to do the same thing for motor vehicles, heating and air conditioning systems and computers."
Solar Impulse all-electric plane 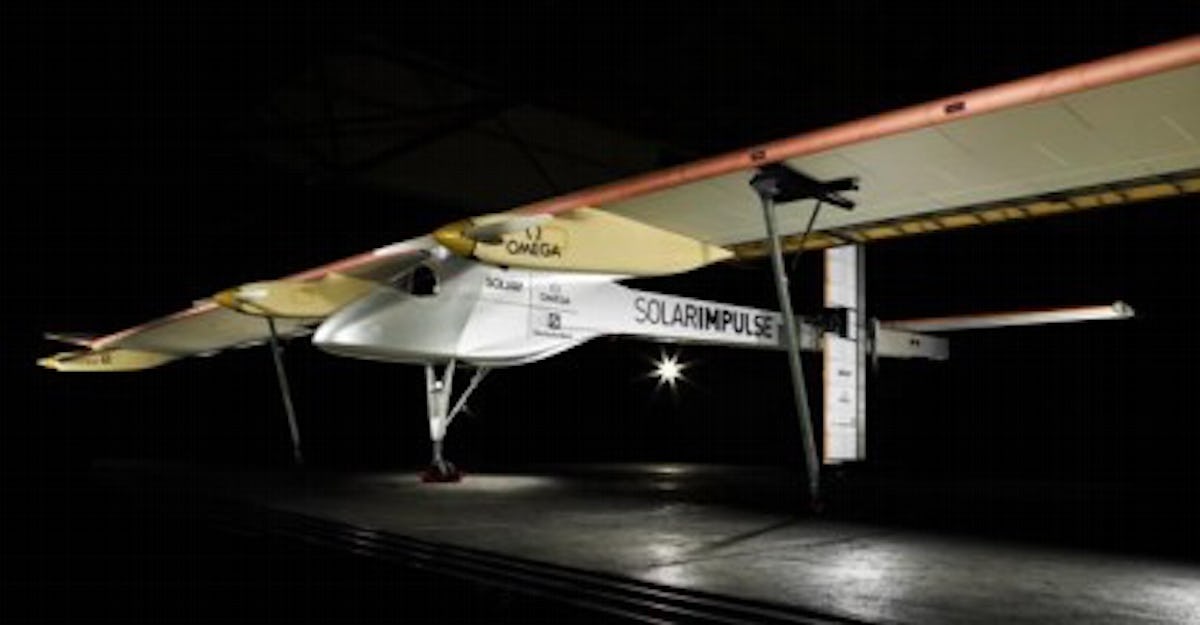 On land, Head now offers electrically self-adjusting skis powered by piezoelectrics in the form of IntellifibersTM. In China, GreenPix is a groundbreaking project where sustainable and digital media technology is applied to the curtain wall of Xicui entertainment complex in Beijing. It is neither small nor portable so it is outside the narrow definition of energy harvesting but it is a sign of smaller things to come. Featuring one of the largest color LED displays worldwide and the first photovoltaic system integrated into a glass curtain wall in China, the building performs as a self-sufficient organic system. It harvests solar energy by day and uses it to illuminate the screen after dark, mirroring a day's climatic cycle. The project was designed and implemented by Simone Giostra & Partners of New York, with lighting design and façade engineering by Arup in London and Beijing. With the support of German manufacturers Schueco and SunWays, Giostra and Arup developed a new technology for laminating photovoltaic cells in a glass curtain wall and they oversaw the production of the first glass solar panels by Chinese manufacturer SunTech. The polycrystalline photovoltaic cells are laminated within the glass of the curtain wall and placed with changing density on the entire building's skin. 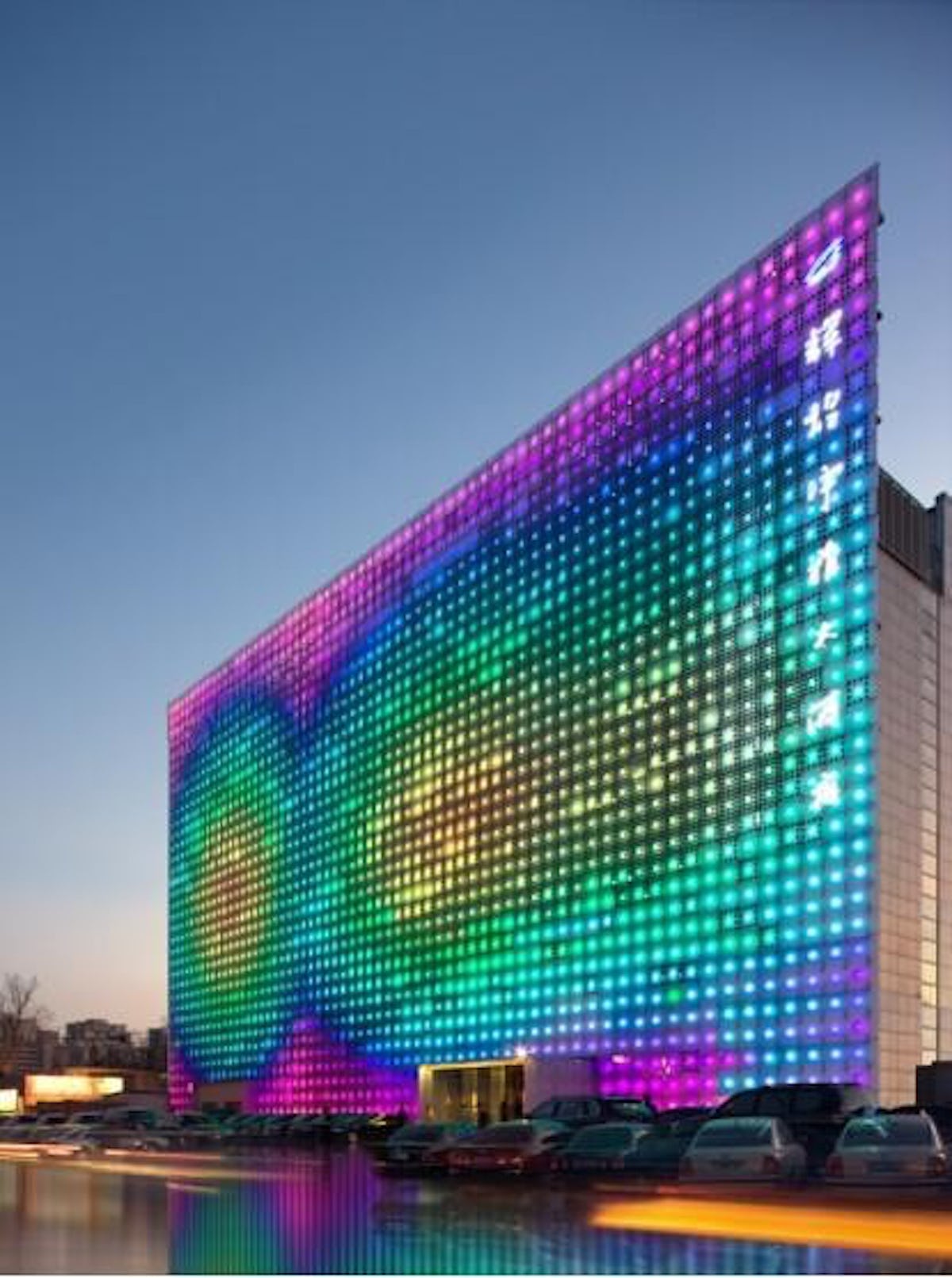 Source: SimoneGiostra-ARUP
Energy harvesting just became glamorous. The new IDTechEx report "Energy Harvesting in Action" gives the detail of 165 examples in ongoing use in 34 countries, identifying the most successful technologies, applications, suppliers, users and territories and the lessons from a few failures as well. This information, important to all in the value chain, has not been accessible before. Energy Harvesting & Storage Europe 2010, the largest European event on the subject, takes place on May 26-27 in Munich, Germany. See www.IDTechEx.com/Munich.
Top image source: Transportation KY
For more read : Energy Harvesting and Storage for Electronic Devices 2009-2019
and attend Energy Harvesting & Storage Europe and Wireless Sensor Networks & RTLS Summit 2010