The Western media debate at length the transformation of the Western automotive industry. However, the real battle of the titans is taking place in East Asia. It concerns electric vehicles, both hybrid and pure electric, and a much bigger picture, because these manufacturers recognise that cars are only half of the value of the electric vehicle market. Western manufacturers have largely missed the fact that electric buses, industrial, commercial and other vehicles such as motorcycles and mobility aids for the disabled, even electric boats have much in common both technically and in terms of manufacture and marketing. When we look at the whole market, including the traction batteries that control cost and performance more than any other component, then we see two titans facing each other. They are China and Japan. Some time ago, they invested their equivalent of the Obama electric vehicle billions committed in 2009 and they are now investing more. From 2001-2006, Japan filed 69% of the world's patents on electric vehicles with China second at 3%.
China
66% of the manufacturers of electric vehicles in the world are in China. Over 90% of the world's electric vehicles are made in China, mainly for use in China. It has the largest potential market for electric vehicles. It mines and controls 95% of the World's rare earth reserves used in the hybrid car batteries, motors and other key components of today's electric vehicles.
No one company has a commanding position in China. One can name BYD Auto, Brilliance, Geely and Chengfang but already about 100 Chinese manufacturers have electric cars for sale today and all Chinese car manufacturers are tasked by the government with bringing out green models shortly. China has bought more electric buses than any other country and most are supplied locally by Kent and others.
Tonaro, Shadong Wuzheng and others make electric golf cars. Electric bicycles are made in very large numbers by Shanghai Forever, Phoenix, Suzhou Small Antelope and, with Taiwan links, Giant and Merida but there are about 2600 Chinese manufacturers of electric two-wheelers including motorcycles and scooters.
Glory Mountain and Interchina Industry Group are two of the thirty or more manufacturers of EVs for the disabled. From buses to pickup trucks and indoor scissor lifts, the light industrial and commercial electric vehicle sector is very large across the world, with Chinese companies such as Champion, China Vehicles Company, New China Vehicles, Wuhan Chancay and Shadong Shunxing among the many involved. Heavy industrial electric vehicles are made locally by Hangzhou Zheli Forklift, Zheijang Goodsense Forklift, Qingdao United Material Handling Technology and others. A significant proportion of the above companies make electric vehicles for very different applications. For example, few Western motor companies make forklifts or buses any more though they do sometimes participate in military and other sectors. The Chinese are moving in the other direction though the individual companies broadening in this way are as yet fairly small. For example, the Suzhou Eagle line up includes an SUV, golf car, pickup truck, large trucks and a bus.
Alibaba.com displays 25,895 electric vehicle products made in China, mostly the vehicles themselves. The sheer breadth of the activity in electric vehicles in China is shown below. The figures are not mutually exclusive because many Chinese manufacturers make vehicles in several categories. However, those in the two wheel and allied sector usually concentrate solely on that.
Approximate number of Chinese manufacturers of hybrid and pure electric vehicles by applicational category in 2010, with the Chinese share shown by hatching. 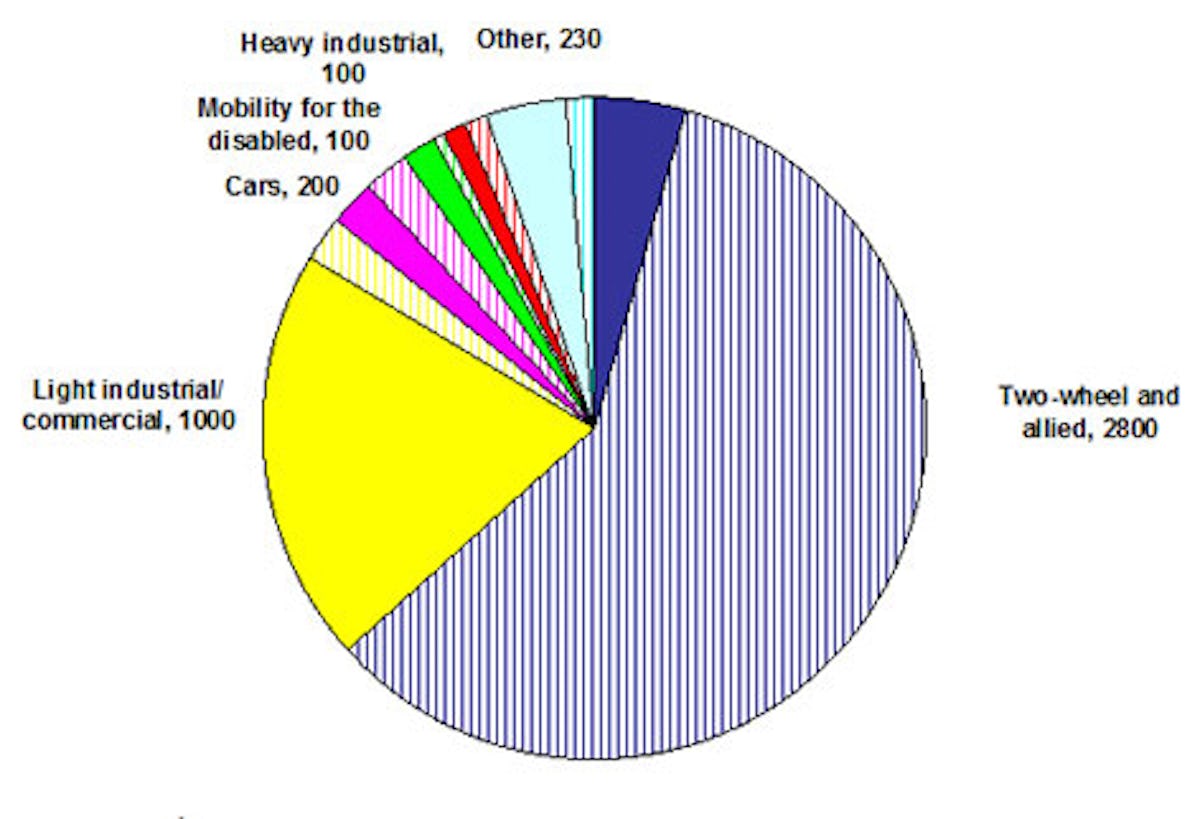 Source IDTechEx
Nearly all of the electric vehicles made in China are pure electric.
Japan
On the other hand, it is Toyota of Japan that is the world leader in making hybrid cars by a big margin, that operation probably being the world's only profitable hybrid car output. Only Toyota controls both its traction battery supply - a joint venture with Panasonic as minority owner - and makes many other types of electric vehicles synergistically with electric car production. This vertical and horizontal integration has provided it with a secure multibillion dollar operation in electric vehicles for many years already.
Before it bought Sanyo in 2009, Panasonic, employing nearly 300,000 people, was already the largest manufacturer of the essential lithium traction batteries for cars. Sanyo also supplies traction batteries, in this case to Ford, Honda, PSA Peugeot Citroen and others. The resulting electrical and electronics conglomerate is the World's second largest after GE of America, a company with only modest involvement in electric vehicles and their components. The electric vehicles and their components made in Japan mainly concern hybrids. However, pure electric vehicles are important too and likely to become more so as Nissan prioritises them in a refreshing counter to the mindless "me too" strategies of so many of its global competitors.
Weaknesses
There is nothing inevitable about the Chinese and Japanese continuing to dominate the electric vehicle business. The best selling electric golf cars are American and the best selling electric forklifts and other heavy industrial vehicles are from the USA and Europe, traditionally the largest markets for them. Tesla, the first profitable electric sports car is a US product with European involvement. Investment in charging infrastructure is more impressive in the West. The non-military marine electric vehicle sector is rising to $4 billion in 2020 according to the new IDTechEx report "Electric Vehicles 2010-2020" . It consists of a similar sum for underwater and on-water craft but, in most cases, most of them are made and bought in the West. They include solar powered yachts, leisure submarines, Autonomous Underwater Vehicles AUVs and electric boats on lakes where internal combustion is banned. The West is where the major proportion of expenditure on military electric vehicles also takes place, again with manufacture locally, this market passing $2 billion by 2014 according to IDTechEx.
Of course the West is not impressive when it comes to low cost manufacture for the most price sensitive vehicles but India claims to have the lowest cost electric car not China or Japan. LGChem of Korea has one of the most impressive inherently-safe lithium traction batteries, a technology now heavily backed by US government money. There are many other very impressive developments in Korea, which has brought forward its national target for mass production of electric cars to 2011. The heavily reported BYD Auto hybrid and pure electric cars in China are expensive and, so far, are not selling very well. China is rationing the lanthanum essential for today's hybrid cars making it difficult for Japan. However, the lithium batteries that will replace those nickel metal hydride batteries loaded with lanthanum will not have materials controlled by any one nation. By acquiring more and more countries, the European Union remains one of the World's largest economies. It heavily supports local manufacture. Accordingly, the next decade will be very interesting for the burgeoning electric vehicle industry and the East Asians will not have it all their own way.
Technologies converge
Increasingly, both hybrid and pure electric technologies will be used in every applicational sector. For instance heavy industrial vehicles use pure electric drive for indoors and are starting to use hybrid technology for outdoors. As that evolves, with the leaders able to offer both technologies over many applicational sectors, the actual technology will converge. Plug in hybrids will have much longer range thanks to batteries with greater energy storage and pure electric vehicles will have range extenders such as tiny gas turbines and transparent solar panels across the whole vehicle.
Evolution of affordable, mainstream electric cars showing the convergence of hybrid and a pure electric technologies. 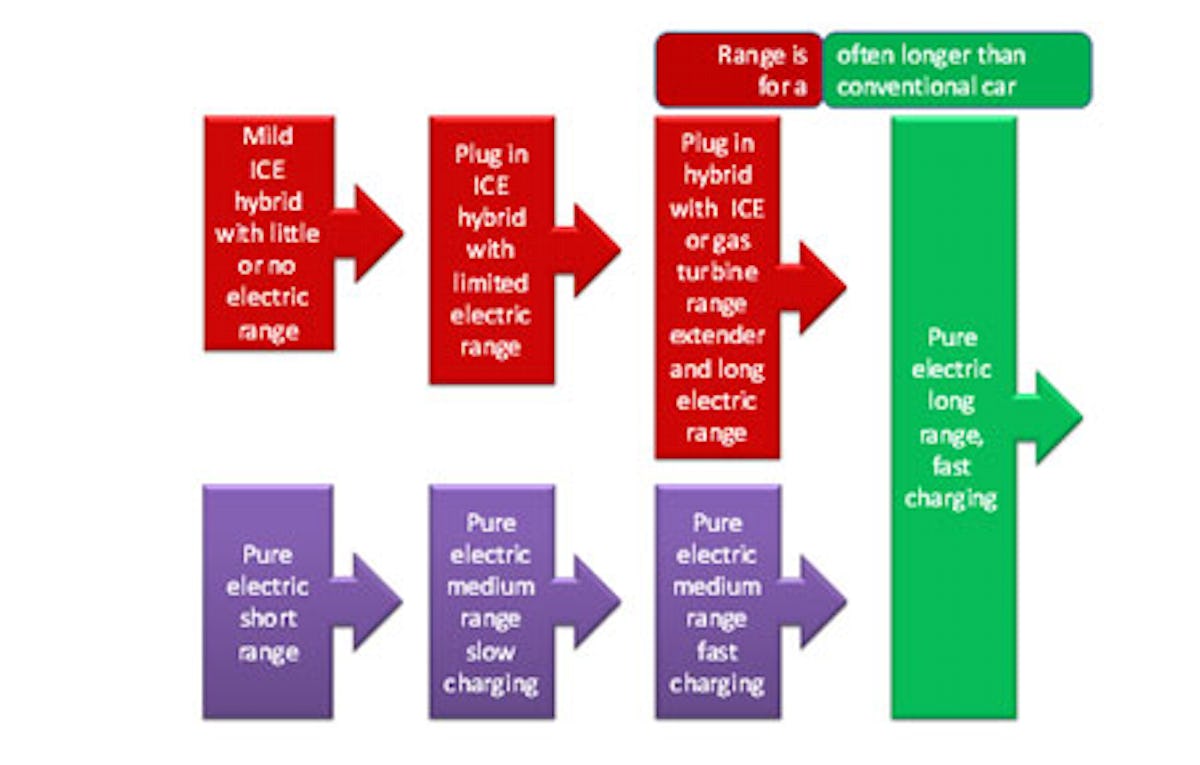 Source "Electric Vehicles 2010-2020" IDTechEx 2010
The convergence of hybrid and pure electric vehicle battery technologies is shown below for cars, but something very similar will happen in most applicational sectors. There is a big picture here.
Traction battery pack nominal energy storage vs battery pack voltage for mild hybrids in red, plug in hybrids in blue and pure electric vehicles in green. 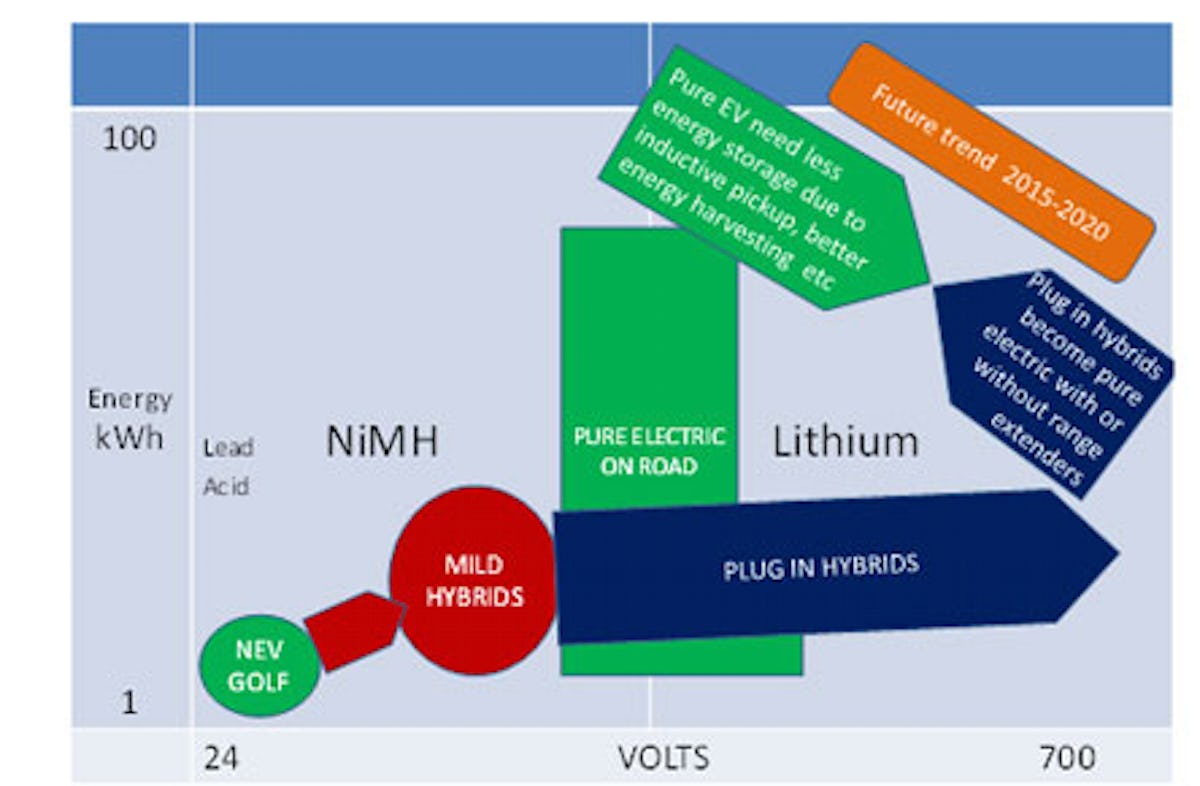 Source "Electric Vehicles 2010-2020" IDTechEx 2010
Winner takes most
The only certainty is that the largest electric vehicle manufacturers and manufacturers of the key component, the traction battery, will not limit themselves to that half of the market called electric cars. Toyota will certainly continue to sit astride many sectors. Its leading Chinese rivals will increasingly copy this strategy. Chinese electric vehicles will tend to have a price advantage. The Chinese may be the first to offer hybrid cars at no price penalty against traditional cars, for example. However, will China beat the prices in India? Will China catch up with the technology that is advancing so rapidly elsewhere? Will it offer the most stylish, functional vehicles with the most trusted brand names? All that remains to be seen.
New report
The new IDTechEx report "Electric Vehicles 2010-2020 Cars, Buses, Two Wheelers, Industrial, Commercial, Mobility for Disabled, Military, Marine, Other" examines the situation in detail. This report is a sister report to IDTechEx reports about the two most important subsectors of the EV business - "Hybrid and Pure Electric Cars 2010-2020" and "Car Traction Batteries - The New Gold Rush 2010-2020" . The reports come with one hour of free telephone or email consultancy. www.IDTechEx.com/research