When considering the prospects of an emerging technology, it is easy to make broad-brush claims. For example, stating that 'greater numbers of connected devices, commonly referred to as the Internet of Things (IoT), will increase demand for printed sensors' seems an uncontroversial statement. However, as in so many areas of life, such a general statement masks a complex underlying landscape. Each technology has different target applications and different adoption barriers, both commercial and technical. As such, real insight requires a far more granular analysis, in which each sensor technology and potential application is considered independently.
The recent IDTechEx report on printed sensors, "Printed and Flexible Sensors 2020-2030: Technologies, Players, Forecasts", employs this granular approach. It includes chapters on a wide range of printed sensor categories, including organic and hybrid image sensors, piezoresistive and piezoelectric pressure sensors, stretchable strain sensors, temperature sensors, printed electrodes for skin patches, biosensors, ITO alternatives for capacitive touch sensors, and others. The overall market for printed and flexible sensors is forecast to reach $4.5 bn by 2030, with especially rapid growth in hybrid image sensors that will grow from less than $1 m today to around $800 m by 2030. The report as a whole includes over 25 forecast lines covering different technologies and applications and mentions 120 different companies and organisations.
Such an approach reveals a complicated picture, with different technologies at different stages of adoption for different applications. The chart below shows IDTechEx's assessment of adoption readiness across the full range of printed sensor technologies and applications (each color represents a different technology or application). 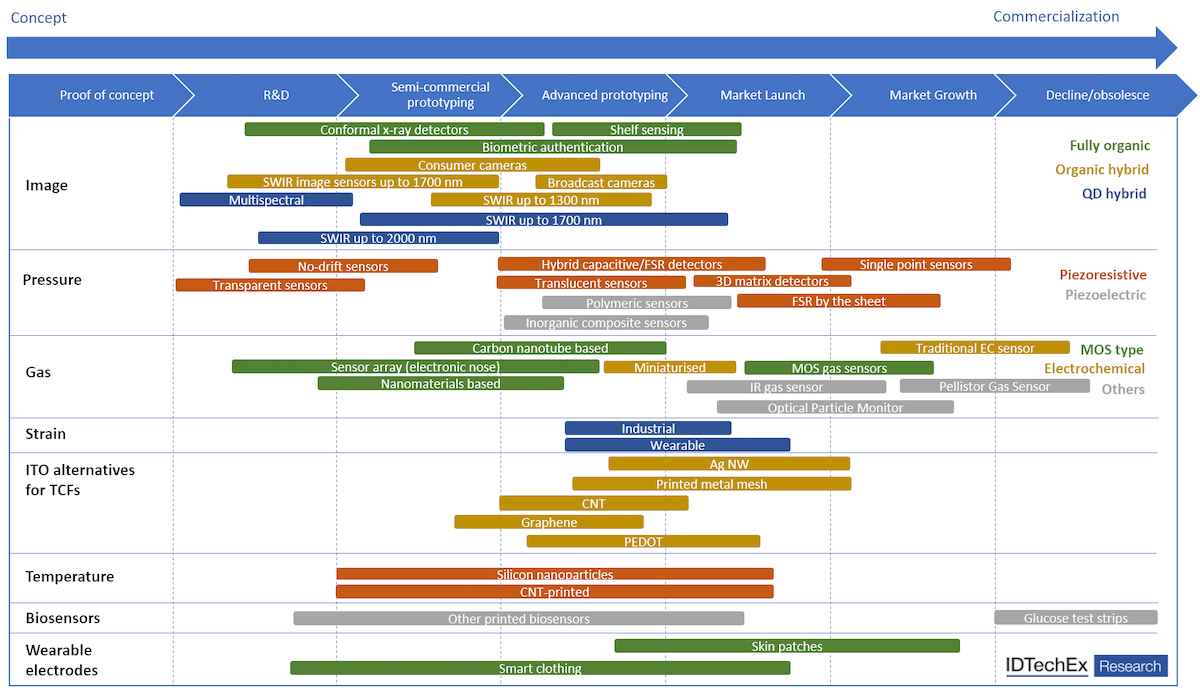