There was an element of back to the future at the hugely successful recent Printed Electronics Europe event in Dresden.
Although a high proportion of printed electronics has progressed from screen printing to other printing technologies, notably inkjet, for better control, less waste of these expensive inks and other benefits, at least one company has reverted to advanced rotary screen printing to gain throughput. Indeed, Professor Edgar Dörsam reported that his team has achieved feature size of better than one micron with its advanced screen printing methods. Daetwyler even announced a capability of gravure printing below five microns in feature size with its machines.
After all the talk of electronics beyond silicon, there were many announcements of printed nanosilicon being used for everything from enhancing the performance of conventional crystalline silicon photovoltaics to printing transistors and thermistors.
Award winners Professor David Britton and Professor Margit Härting of the University of Cape Town can even do that on paper. Sharp of Japan described its collaboration with Nanogram of the USA in preparing an integration process for silicon nanoparticles. The followers of nanosilicon believe that the successor of silicon is....silicon.
Following the promotion of the concept of colour flexible displays and resulting unsatisfied demand due to life and cost problems with OLEDs, many are entering the older flexible colour display technology of ac electroluminescence and improving performance and creative design of new applications. That includes Lumoza (market view shown below), Botest Sensor Technology and Professor Wayne Cranton of Nottingham Trent University in the UK preparing to commercialise a breakthrough. 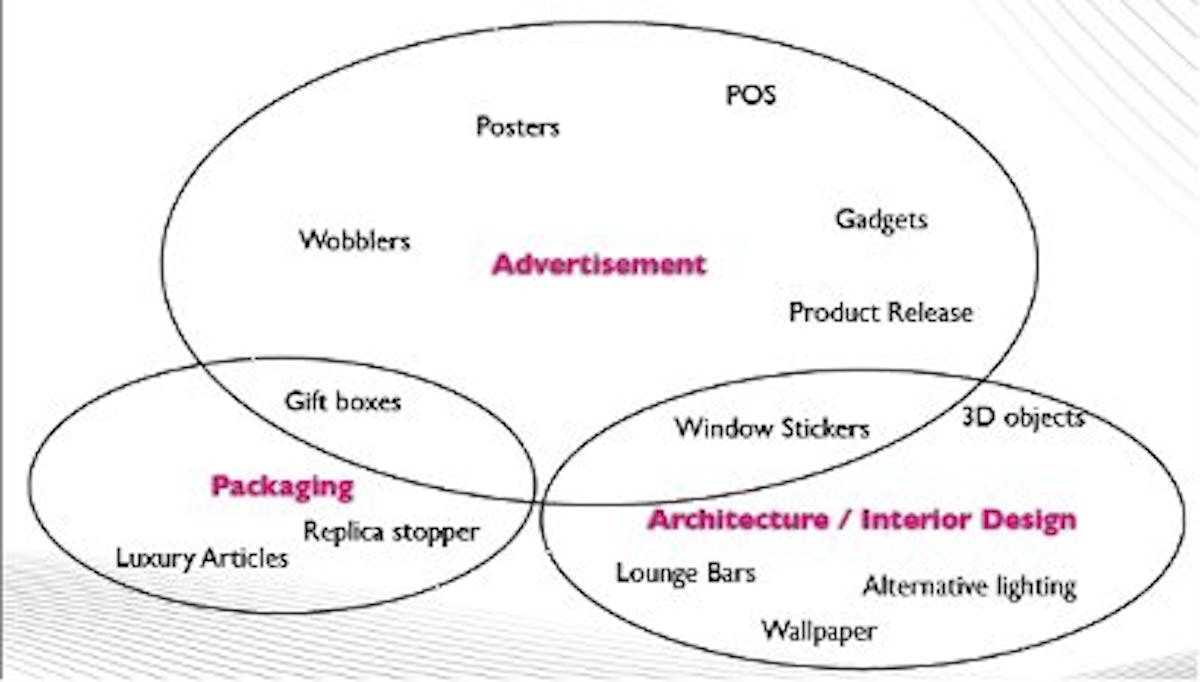 Source: Lumoza
CETEMMSA in Spain is even partly printing the ac electroluminescent display inverters now. However, although many are disillusioned with OLEDs and have left the business, new entrants are appearing here as well, including, in the UK, PolyPhotonics and Polymertronics and Prof Poopathy Kathirgamanathan of Brunel University preparing to spin off a company.
Then there was the replacement of copper wires with printed silver but now several organisations making available the ability to print copper including Novacentrix of the USA, Hitachi Chemical of Japan and now Intrinsiq of the UK. It is even "come back all is forgiven" with LCDs because Kent Displays and the Hong Kong University of Science and Technology can now print them on flexible substrates. Sharp described how it is even using printing to reduce the cost of conventional LCDs. They argue that the success of LCDs will therefore continue. 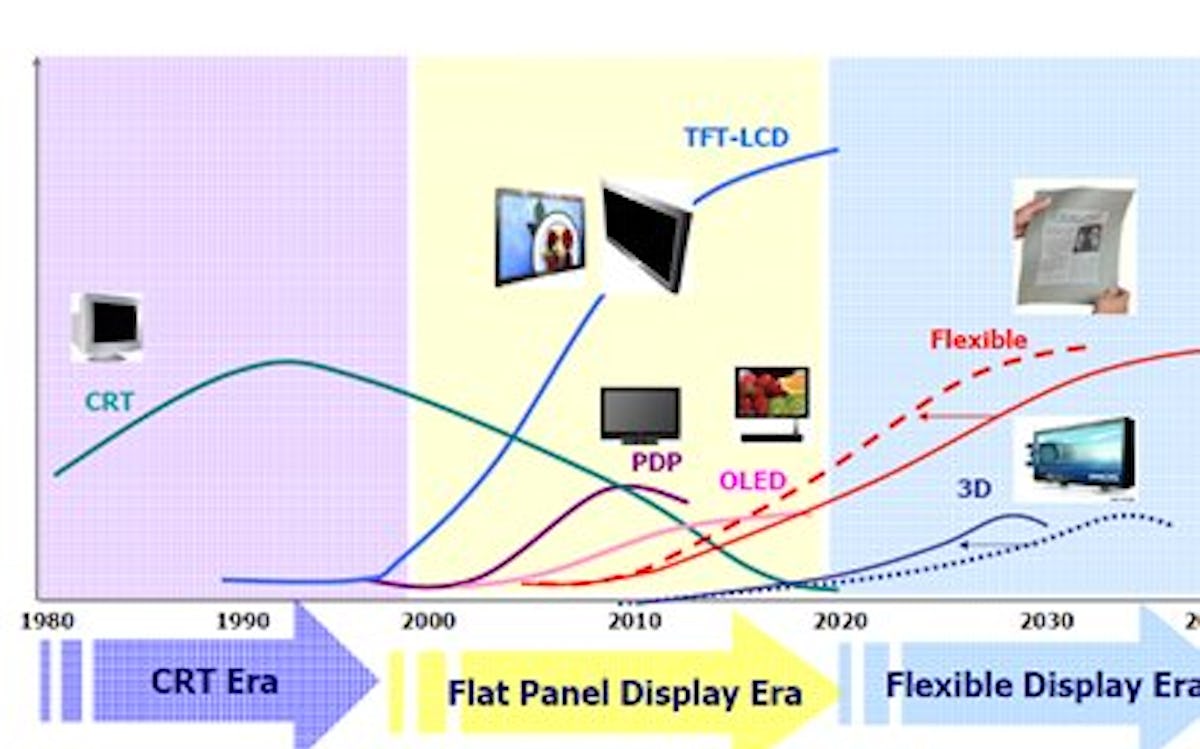 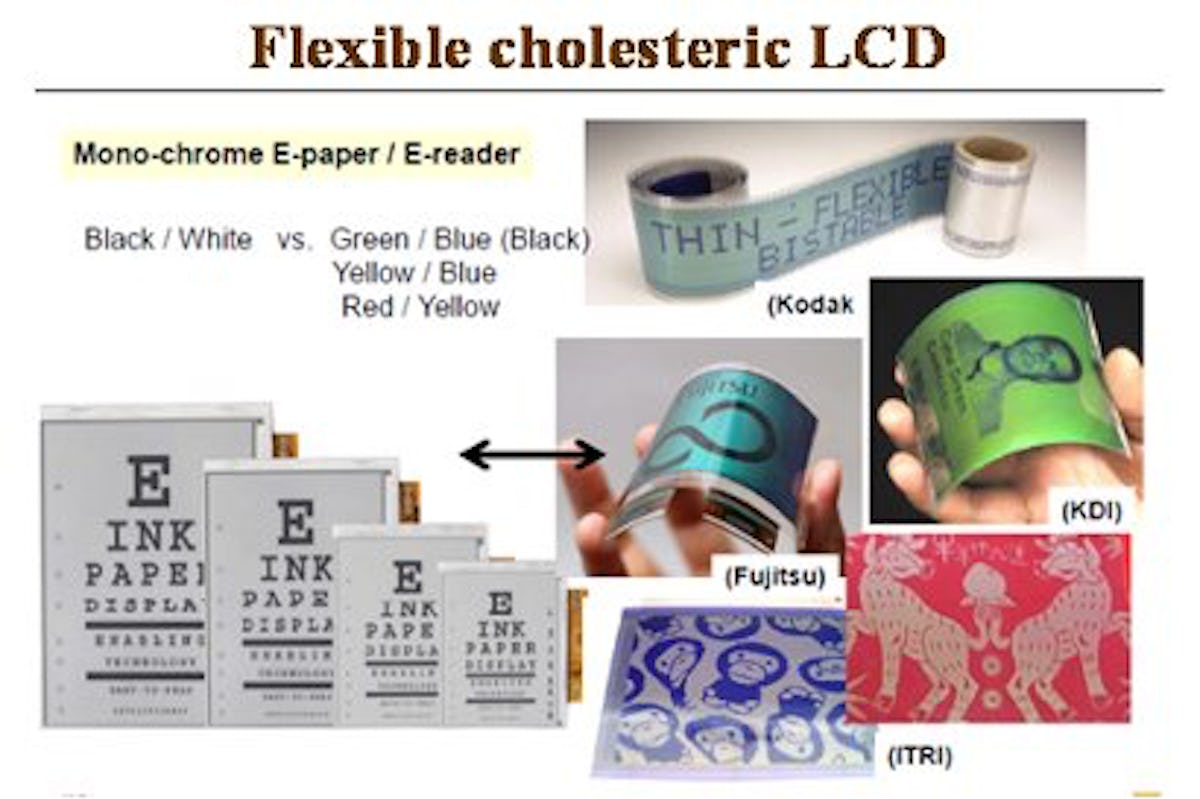 Source: Hong Kong University of Science and Technology
Professor Vladimir Chigrinov of Hong Kong University of Science and Technology concluded that flexible LCDs are rapidly developing, but there is no acknowledged leading technology for production. Both electronic and optical addressing of flexible LCD is possible. Optically rewritable technique based on photoalignment technology is highly desirable, as E-paper displays suffer from the high level of complexity of driving electronic due to the insufficient durability of flexible conductor and contact bonding. Optical writing and erasing E-paper is a valuable contribution to the green technology, as in many cases E-paper will replace usual paper with the same quality of image.
Joel Domino of Kent Displays announced a different process actually in production. 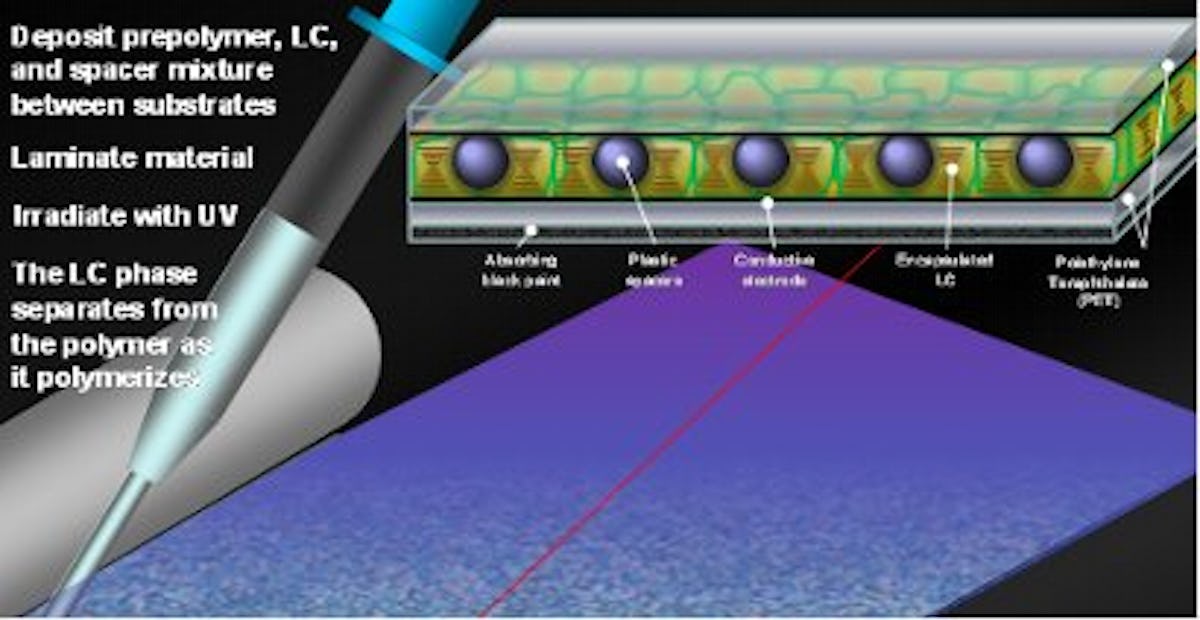 Source: Kent Displays
He claimed that his cholesteric based Reflex technology is making significant inroads into the flexible display world;
• Technology is matured and ready for mass production
• Transitioning from batch process to roll-to-roll manufacturing
• Multiple product lines positioned to enter into market
• eTablet product in market at present.
He noted that the flexible displays from Reflex are truly flexible - front and back planes are thin flexible plastic and new applications from Reflex displays and environmentally sound designs bring a new era in the display industry.
So some think the printed electronics market will involve copper conductors, silicon semiconductors and a display technology invented in Marie Curie's laboratory in Paris in 1936 - ac electroluminescence. They are right, but that is only part of the story, as the rest of the event testified.
For more attend : Printed Electronics & Photovoltaics USA 2010 .