Laminar batteries are increasingly adopted in electronics because they have better cooling, damage tolerance and performance in respect of charge and discharge speed when optimally designed for this shape.
Companies such as Cymbet and Infinite Power Solutions already supply small laminar lithium batteries for such applications as backup power for electronics and some even continue to operate if a nail is driven through them.
The one from Front Edge is only 0.05 millimeters thick. Then there are printed manganese dioxide zinc batteries on paper or plastic film from Blue Spark, Enfucell, Power Paper, ACREO, Prelonic Technologies and new entrant Menippos. Batteries for mobile phones, laptops and e-readers are getting flatter and 30 billion flat coin cells are sold every year.

All this leads one to question the legacy thinking with batteries in vehicles, where they remain in a block configuration even when it is expanded to power the wheels directly in an electric vehicle. This leads to a need for water cooling and other suboptimal practices including taking up too much passenger space.
It is therefore interesting to see laminar battery expert Planar Energy Devices newly targeting traction batteries and a laminar approach becoming common with some other vehicle components.
For instance, some car manufacturers are planning transparent photovoltaics that conform to the shape of the whole car. T-Ink develops "plywood electronics" where the heavy instrument and lighting cluster above the driver's head is replaced by multilayer printed electronics and lighting that tolerates subsequent plastic moulding to any shape. This thin multilayer laminar structure gives significant space and weight saving and even the expensive heavy copper wiring around the car can be printed in future. The electronics and electrics becomes part of the shell of the car and Mercedes is even developing woven electronics in the fabric of the car seats. Battery makers need to adopt the new paradigm as well. Fiat is making a start with its work on wireless laminar external lighting clusters that harvest energy locally.

It is important to realise that the subject of electric vehicles, and therefore the move to laminar structures, spans everything from aircraft to autonomous underwater vehicles AUVs because best practice is increasingly transferred from one to the other and it can start in any of them.
Analyst IDTechEx finds that electric cars (hybrid and pure electric) are only about half of the global electric vehicle market by value and will remain so in ten years time when the market will have grown over fourfold. The car traction battery market in 2020 shown below is therefore only part of the story.
IDTechEx projection of the global car traction battery market in 2020 in millions of dollars 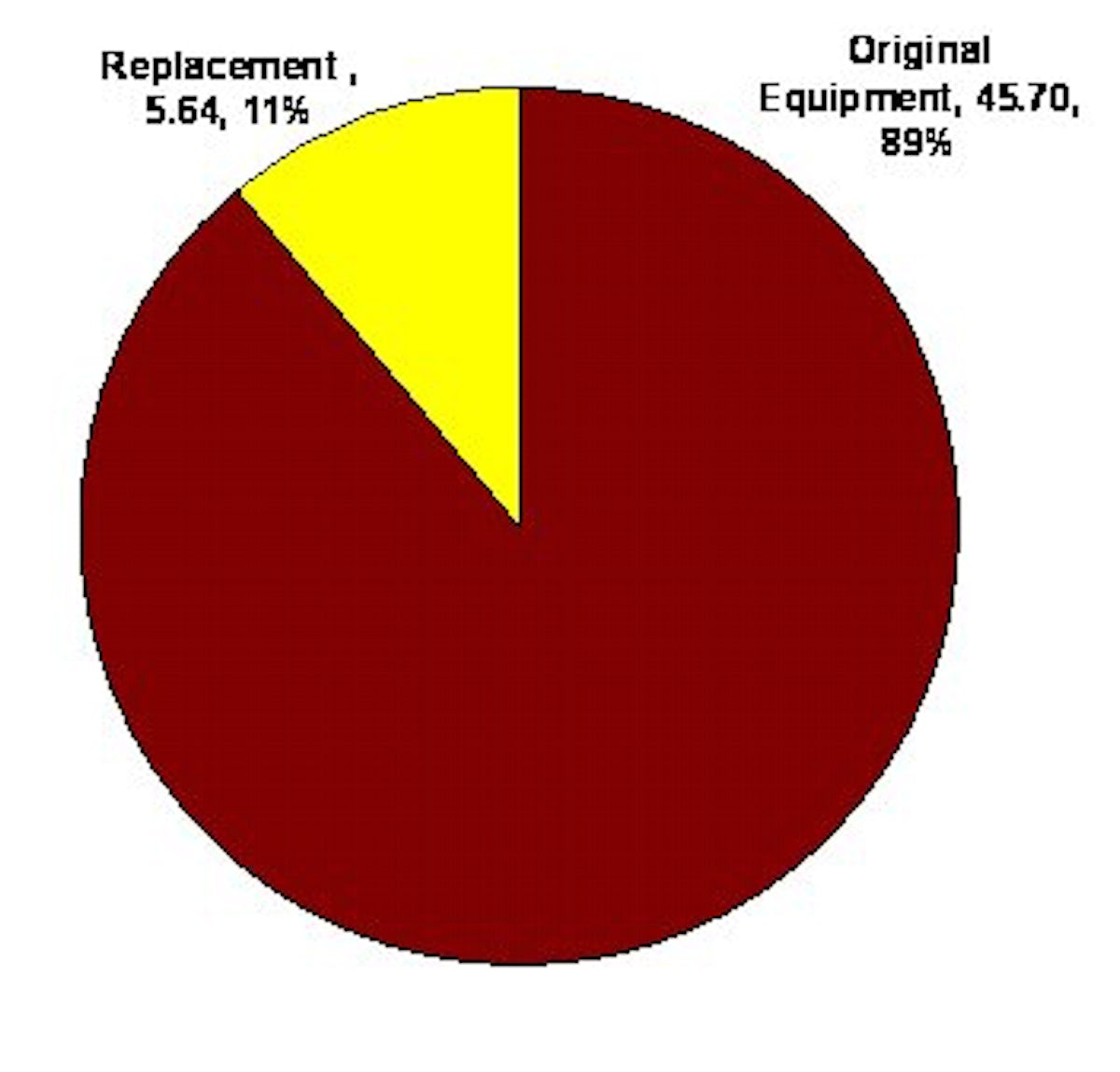 Source IDTechEx report "Car Traction Batteries: The New Gold Rush 2010-2020"
However, state of the art electric technology is typically appearing in cars only after it has been used in other electric vehicles, so it is important to track the whole business. Indeed, component suppliers increasingly sell horizontally across more and more types of electric vehicle. For example, ReVolt Technologies will launch its new zinc air batteries in e-bikes before contemplating applications in cars. Laminar traction batteries are another advance first appearing outside the car industry.

True to its name, Planar Energy battery technology is laminar. The company was spun out of the U.S. Department of Energy's legendary National Renewable Energy Laboratory. Its battery technology is claimed to be superior to conventional Li-Ion at less than half the cost per KWh, with three times the energy density.Solid state batteries replace the plastics, binders, powders and liquids of Li-Ion batteries with durable, nanostructured films. Indeed, in April 2010, it was announced that Planar Energy is one of four companies selected through a competitive-solicitation process to collaborate in a U.S. Department of Energy research-and-development initiative at Oak Ridge National Laboratory (ORNL) to address energy-storage challenges presented by lithium-based batteries.
"This program allocates $400,000 to help advance the commercialization of our breakthrough solid-state battery technology," said Scott Faris, Planar Energy's president and CEO, who said the company's energy cells and batteries "are substantially smaller, cheaper and safer, and can deliver more power than any existing rechargeable chemical battery technology."
The fundamental challenge of solid state batteries is that current fabrication methods do not scale to large format batteries because of the cost of vacuum deposition. Planar has developed an alternative, game changing deposition process and has demonstrated the ability to make nanostructured electrolyte and electrode materials with superior chemistries using this process. Its SPEED is a low-cost, high-speed, roll-to-roll deposition process, which is significantly more flexible and scalable than existing deposition methods. Using water-based precursors, SPEED allows for the direct growth of self-assembled films directly on flexible substrates or directly on top of other films. Film growth is done under ambient conditions and with growth rates exceeding 1 micron/minute over large surface areas.
SPEED-deposited films can range from single element films or complex inorganic chemistries with excellent stochiometry.

At a recent electric vehicle conference it was admitted that battery ribbon over the whole vehicle would have major benefits though no one present was working on this option. There is certainly a possibility of the whole shell of the vehicle incorporating a battery layer but we turn to aircraft for the first progress in this direction.

Aurora Flight Sciences designs and builds robotic aircraft and other advanced aerospace vehicles for scientific and military applications, and in April 2010, it was selected for an award through the Defence Advanced Research Projects Agency (DARPA) Microsystems Technology Office (MTO) to develop an integrated energy scavenging and storage system for portable electronics, unmanned vehicles, and weapons systems.
The majority of wireless devices are powered by batteries, which must be replaced or recharged when depleted; this is a major limitation for remotely located systems. Solar energy scavenging is widely used for recharging, but alternative technologies are required to provide night time scavenging capability to extend system lifetime and utility. Aurora's concept will target infrared (IR), or thermal radiation, as a nocturnal energy source.
Aurora's effort will develop and evaluate an integrated system that includes both solar cells for day time use and infrared photovoltaic cells for night time use, as well as integrating these energy sources with thin-film lithium batteries. "Thin-film micro-batteries have remarkable performance and life compared to everyday batteries," said Dr. Philip Johnson, the program's principal investigator. "When embedded with ambient energy scavenging devices we have the prospect of batteries that will remain perpetually charged."
A key attribute will be the development of the energy sources and batteries not just as individual technologies, but integrating them into a reliable night/day power system, including innovative ways to package the system into existing vehicle or weapons systems structures. Aurora believes that this integrated scavenging and storage system technology may provide extended lifetime and utility to other systems, such as unmanned aerial vehicles (UAVs), in the future.
This builds on past work. In 2008 DARPA selected Aurora Flight Sciences, Boeing and Lockheed Martin as contractors for the first phase of the Vulture program to design and develop unmanned aerial systems able to fly on station and perform their missions for five years without interruption. Aurora's design for the Vulture program is called "Odysseus," and uses solar energy to power the aircraft during daylight, and stored solar energy to power the aircraft at night. This project is now into its second phase which includes risk reduction and testing during a three month uninterrupted flight in mid 2012.
For more read: "Car Traction Batteries: The New Gold Rush 2010-2020" and"Batteries, Supercapacitors, Alternative Storage for Portable Devices 2009-2019"and Electric Vehicles 2010-2020
Also attend Energy Harvesting & Storage Europe and Wireless Sensor Networks & RTLS Summit 2010 and Future of Electric Vehicles a global event on the whole electric vehicle market, covering all forms of EVs.