Some impressions of Energy Harvesting Europe

The IDTechEx Energy Harvesting Europe event in Munich had its first day on 26 May. Here are some impressions from the first day.

Speakers noted that rechargeable batteries waste up to 20% of energy, short lived primary batteries pollute and escalate maintenance cost and ever tougher battery regulations are driving people more and more to energy harvesting. At the larger end, second generation lithium batteries that are safer and have better performance are incorporated in the Lightning Car Company's Lightning sports car, the KleenSpeed Technologies 200mph Formula One car, the Hawkes Ocean Technologies Deepflight submarines, the PC-Aero pure electric aircraft etc. but even more powerful batteries will be welcome. The new technologies will permeate down to small battery technology for energy harvesting but there is still a problem with primary batteries in particular.
253 billion batteries that are not recycled will be buried in Europe over the next 50 years unless something happens. Advanced laminar batteries - eg Infinite Power Solutions and Cymbet - are part of the solution as are 20 year lithium thionyl chloride batteries from Tadiran Batteries. More types of energy harvesting are being used, often together. For example EnOcean GmbH employs photovoltaics, linear electrodynamics and thermoelectrics but now has prototype wireless sensors and actuators based on rotation and vibration.

From the French National Railway SNCF to Rolls Royce Aeroengines, there is a great demand for wireless sensors, with an increasing percentage that are meshed ie Wireless sensor networks WSN. For example, SNCF is looking at sensors on buildings, rolling stock and infrastructure, even including soil monitoring. Rapid progress was reported in reducing the power needed, this leading to such things as photovoltaically charged street lighting and the potential to provide 50% of lighting on public stairways using footfall harvesting, all thanks to better LEDs. The increased output of energy harvesting devices was illustrated by some vibration and movement harvesters providing two watts, enough to power WSN based on mobile phone circuits.
When it comes to sensing, cited needs included the fact that the average supermarket chain loses $0.5 million yearly in inadequately controlled cold chain produce and there are equivalent problems with the transport of blood plasma. Jet engines and aircraft need "huge numbers" of wireless sensors because of the cost weight and sheer impracticality of extensive wiring where trained ferrets are sometimes used to add wiring in aircraft.
Cars are rapidly employing regenerative braking - even a Formula 1 pure electric car being made in the USA by Kleenspeed that reaches 200mph, a planned Renault fun car for beaches and the Mission Motors Mission One electric motorcycle which achieves 150 mph and is in full production. Think has installed thermoelectric harvesting into conventional Formula 1 cars. 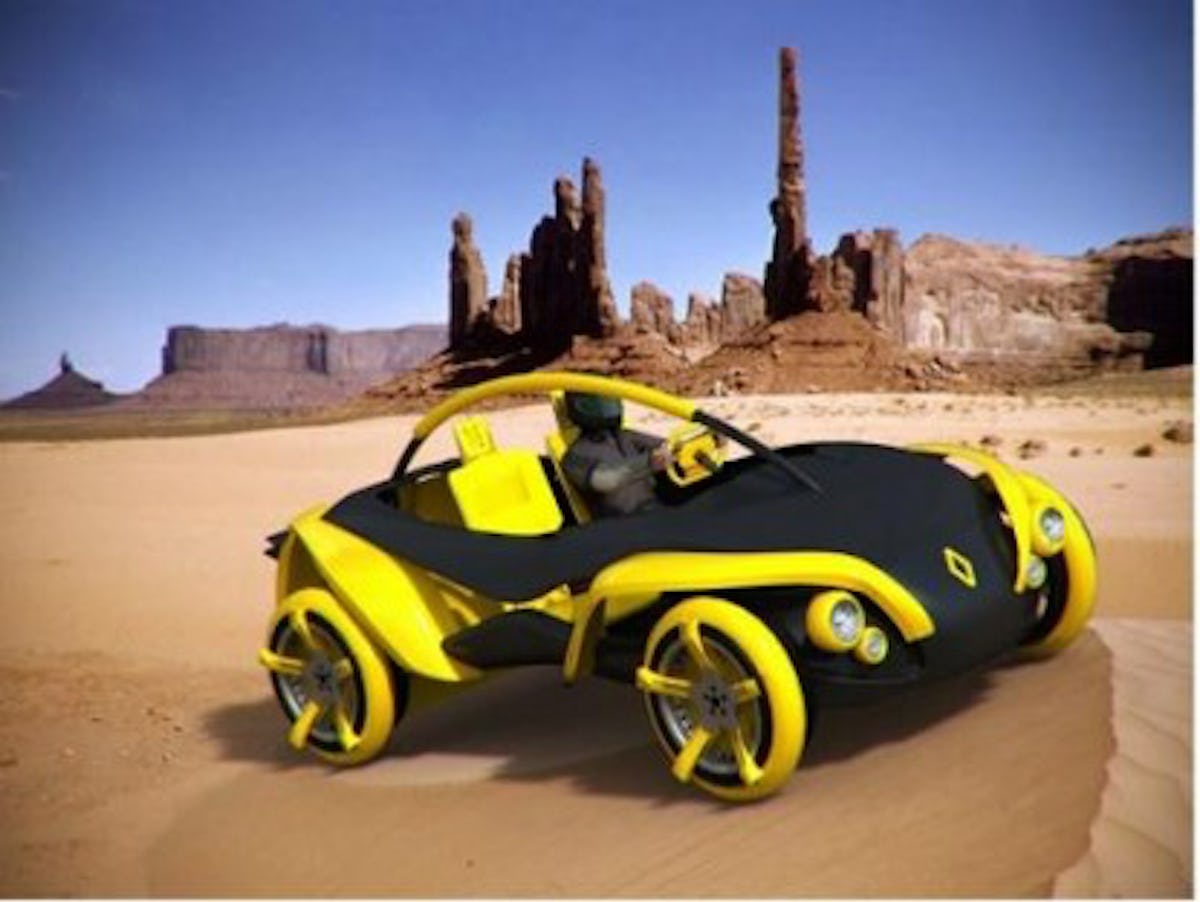 Source Renault
Photovoltaics is increasingly common on cars as well and they have appeared on surfboards to charge phones. 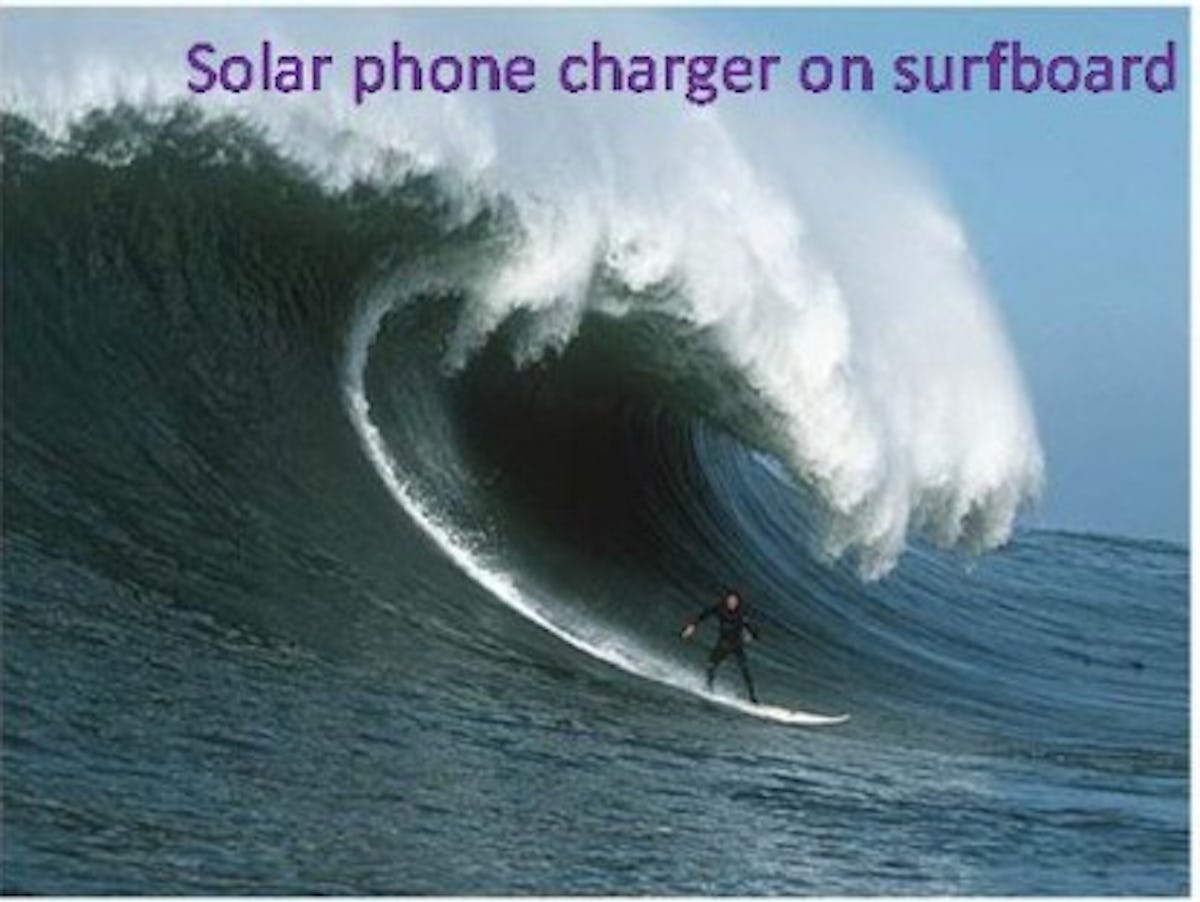 Source IDTechEx
Wireless sensors are rapidly employing photovoltaics and thermoelectric and there is some vibration harvesting. The huge success of EnOcean wireless sensors and actuators in over 100,000 buildings was well aired. It uses electrodynamic and photovoltaic harvesting almost entirely.

Professor Haydn Thompson of Rolls Royce said that batteries used in energy harvesting and alone in WSN can be damaged by energy spikes and temperature but the new lithium laminar batteries are a great improvement here. DC-DC conversion wastes a lot of energy but that situation is improving. However, there are other shortcomings in what harvesting is on offer. Thermoelectrics are very attractive in aircraft, on pipelines etc but they are fragile to install. EH devices need to be smaller, lighter, better able to survive a very hostile environment, have 25 to 30 year life and be cheaper for extensive use in aerospace to result, say the potential users.
System integrator Northrop Grumman said it had installed 1000 RFID systems but only two WSN though WSN will now rapidly increase, with work even going on in correctional facilities. "It is not whether but when". One problem has been that many nodes do not work but he was impressed by Evigia a small company in Michigan and he has placed a substantial order with them. Temperature differences are more likely to endure than vibration, he said. Thermoelectrics have no moving parts to go wrong unlike vibration harvesters, where there is even some disquiet about whether claimed broad band vibration harvesting lives up to promises. Indeed, everyone was talking of tuning to need, not standard products.
Pavegen has footfall harvesting from special paving stones that light up. They tried pneumatic, hydraulic and piezoelectric solutions but their final choice is secret. Lithium and lead acid batteries and capacitors have been tried for energy storage by this company. Illuminated posters and signage have been driven and there are versions for staircases.
Roadway versions will only succeed when a feed-in tariff is agreed, the speaker warned.
Top image credit: 12volt solarpanels.net
For more read : Energy Harvesting and Storage for Electronic Devices 2009-2019
and attend Energy Harvesting & Storage and Wireless Networks & RTLS USA 2010