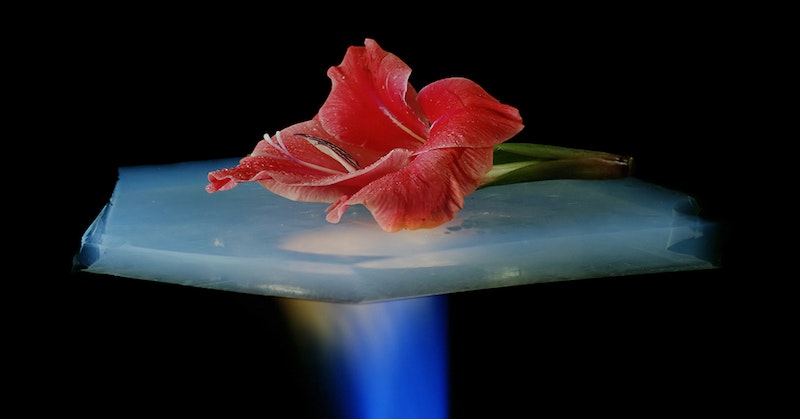 The aerogel market is forecast to exceed $700m within the next decade. This may appear modest for a unique material family that has been known for nearly a century, but after long periods of stagnation and several market failings this would represent a significant growth from the market status in 2020.
IDTechEx expect the aerogel market in 2021 to be below $300m with over 95% of the market attributable to silica products. There are many online figures that will put that market significantly larger but with the revenue of the market leaders, Aspen Aerogels, ranging from $100-140m over the past 6-years anything larger would appear unrealistic. However, despite relatively flat performance from the likes of the market leaders, a 10-year period of growth is anticipated. The COVID-19 pandemic has, of course, temporarily impacted the aerogel production, supply chain, and markets; this will delay or cancel some plans, but the overall outlook remains positive. This article will look at what will be driving this growth.
For more information on the aerogel market see the latest report from IDTechEx, "Aerogels 2021-2031: Technologies, Markets and Players". IDTechEx has been covering the aerogel industry for many years and this report provides the most comprehensive overview of the market, including benchmarking studies, case studies, and granular market forecasts. A detailed manufacturer analysis is provided including their capacity, revenue, products, production processes, planned expansions, and more.

There has been a significant shift in the installed capacity for silica aerogels over the past decade. Historically this was predominantly located in North America and Europe, but we have witnessed notable growth in China with the likes of Nano Tech, Alison Aerogel, IBIH, and many more all establishing notable capacities. For full details see the market report.
There are setbacks to some of these companies, such as the results of a patent infringement lawsuit, but as greater utilisations are realised this enhanced availability and competition will further open the market and facilitate growth.

The largest end-user market for silica aerogel is oil & gas and the adoption from this industry has allowed for the commercial growth not seen before 21st century. There are still plenty of opportunities here, most notably in LNG applications, but the industry must diversify away from this. Not only are there the long-term concerns in non-renewables but also the impact macroeconomic trends can have on downstream products highly dependent on one sector. 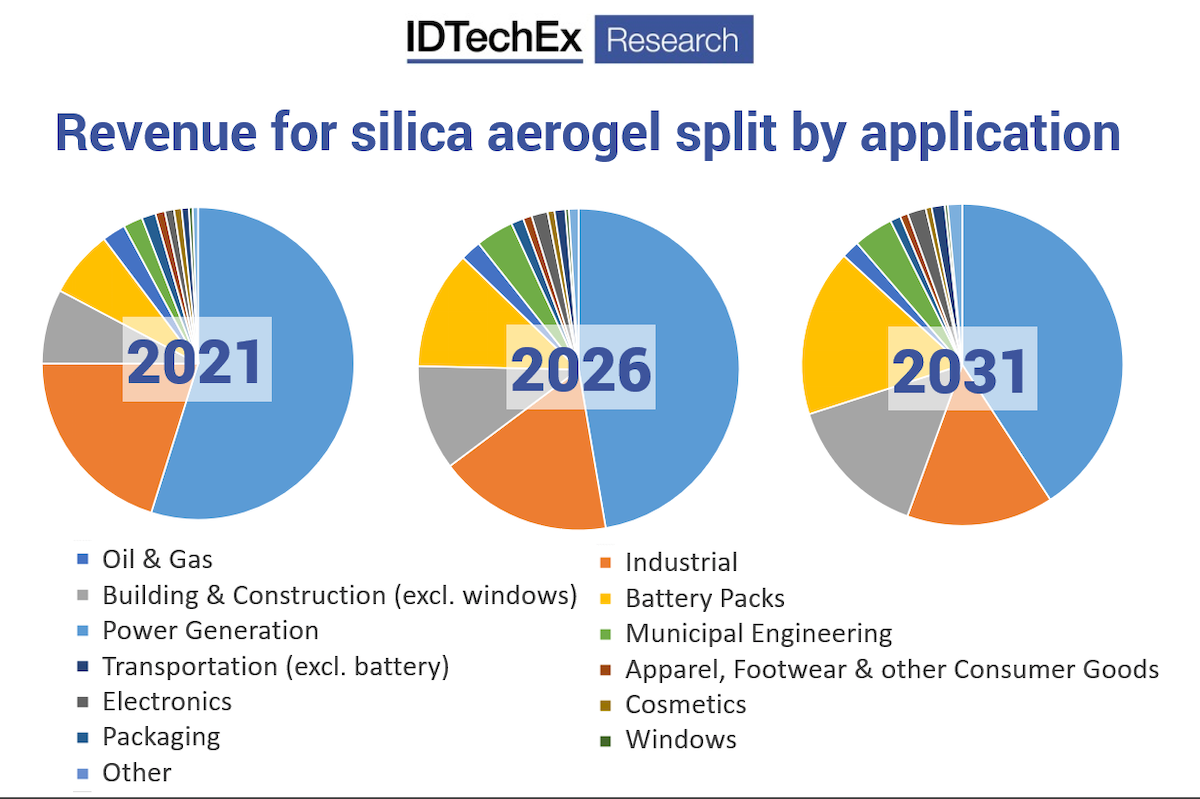 Aerogel market analysis. Source: "Aerogels 2021-2031: Technologies, Markets and Players"
IDTechEx analysis expects silica aerogel products will diversify into the next 10-years. There are lots of small volume growth opportunities in municipal engineering, packaging, apparel, and electronics but the 2 sectors seeing the highest growth will be in building & construction and electric vehicle battery packs. Both will be greatly influenced by changes in regulation.
Aerogel manufacturers have been trying to sell more into the building & construction market for many years; the challenge is that aerogel blankets are expensive and competing against very low-cost alternatives. The success will come from regulation shifts including more energy efficient buildings and stricter fire safety requirements. Disasters like Grenfell Tower in London was caused by the insulative cladding used and is causing large changes to the regulations. Aerogel blankets can boast an A2 fire rating and when coupled with lightweight easy installation, breathability, hydrophobicity and of course the unmatched thermal insulation market penetration will begin to be seen.
The electric vehicle market is booming (IDTechEx forecast this to reach $2.3 trillion by 2041) and central to this is the role of lithium-ion batteries. There is still limited convergence at both the cell and pack levels, with a large variety in designs coming to market. Again, a key consideration is the thermal management; IDTechEx has a dedicated report on the topic which provides extensive details on the pack designs, cooling strategies, thermal interface materials, and more. Silica aerogel blankets have just begun to see adoption in this nascent market as a thermal runaway mitigation solution. Key Chinese players, such as CATL, are known to use aerogel blankets and the first contract was announced by Aspen Aerogels in late 2020 with a major US automotive OEM. Aerogels compete against many other solutions but with such a large potential even a modest market share could be highly significant.

There remains a consistent amount of research from academia and industry in the field. The IDTechEx market report includes a comprehensive patent analysis which shows how the key assignees has changed and (like the manufacturing efforts) shifted to China. Interestingly, DuPont and GE hold the highest number of total patents referencing aerogels but a very high proportion of these are inactive; looking exclusively at those that are granted or pending approval shows Taiwan Semiconductor Manufacturing Company (TSMC) as a clear leader. Patents only tell a small part of the story, as many R&D divisions are evaluating about whether to increase their investment and bring products to market, but there remains trepidation with the long history of past failings.
Academia, R&D, and spin-out companies generally operate in two areas: those looking to change the manufacturing process for existing products and those looking to bring new aerogel materials to markets. The former has a large focus on either ambient pressure drying methods or using waste or "green" feedstocks.
For the new varieties of aerogels, IDTechEx has identified polymer panels and films as a rapidly emerging area of commercial activity. Although silica monoliths are the most routinely photographed, their brittleness makes them have practically no commercial applications. Polymer variants have very different mechanical properties, taking the industry in many new directions. Many of the promising players are establishing notable production capacities and there is already significant interest from large end-users across a range of sectors for their use in 5G antennas to aerospace interiors. Carbon aerogels have been known for a longer time but are again seeing lots of market activity and technology developments (such as graphene aerogels) with some very promising results in energy storage applications.
These advanced manufacturing processes progress and new aerogels will come to market in the next decade and play a role in the forecast growth.
For more information on this report, please visit www.IDTechEx.com/Aerogels, or for the full portfolio of Advanced Materials research available from IDTechEx please visit www.IDTechEx.com/Research/AM.
IDTechEx guides your strategic business decisions through its Research, Subscription and Consultancy products, helping you profit from emerging technologies. For more information, contact research@IDTechEx.com or visit www.IDTechEx.com.

Top Technology Trends 2021 - with IDTechEx Insights
Join the Upcoming Webinar: Future of Hydrogels Beyond Medical
Has the Funding for Graphene Dried up?
Aerogels: Is China Taking Over the Market Landscape?