ABSL
The component industry serving the electric vehicle industry is very extensive though it mainly consists of small companies. In 2010, a battery manufacturer at the tip of Scotland has secured a £4.6m contract with the Ministry of Defence (MoD) to supply lightweight portable power chargers for soldiers. It also makes traction batteries for military vehicles.
Thurso-based ABSL Power Solutions also makes batteries for helmet-mounted devices, military radios and unmanned aerial vehicles. Highlands and Islands Enterprise (HIE) has awarded the firm an £87,000 grant to help expand its business. The charger can be carried by troops in the field to power equipment.
Unusually for a manufacturer of battery packs, ABSL even makes the cells themselves. ABSL has powered various marine equipments working under harsh and exacting conditions and for long durations. The power solutions provided by ABSL for the marine industry includes powering equipments used in applications such as underwater Mine neutralisation Systems , Reconnaissance and Unmanned Underwater Vehicles (UUV's).
ABSL was selected by BAE Systems (BAE) to provide the power solution for Archerfish, its mine Neutralisation vehicle, a system which can be launched from helicopters or surface ships to locate, identify and neutralise undersea mines.
BAE Systems is contracted via Prime contractor Raytheon to supply the Archerfish system for the US Navy's Airborne Mine Neutralisation System (AMNS) and will also supply Archerfish as the ship-launched system following its recent designation as the US Navy's standard mine neutraliser.
ABSL was contracted to design, develop, qualify and manufacture the 20.8Ah, 14.8V Lithium-ion battery for the two variants of Archerfish: the expendable device with an explosive warhead and the training device.
Modular Li-ion batteries for UUVs 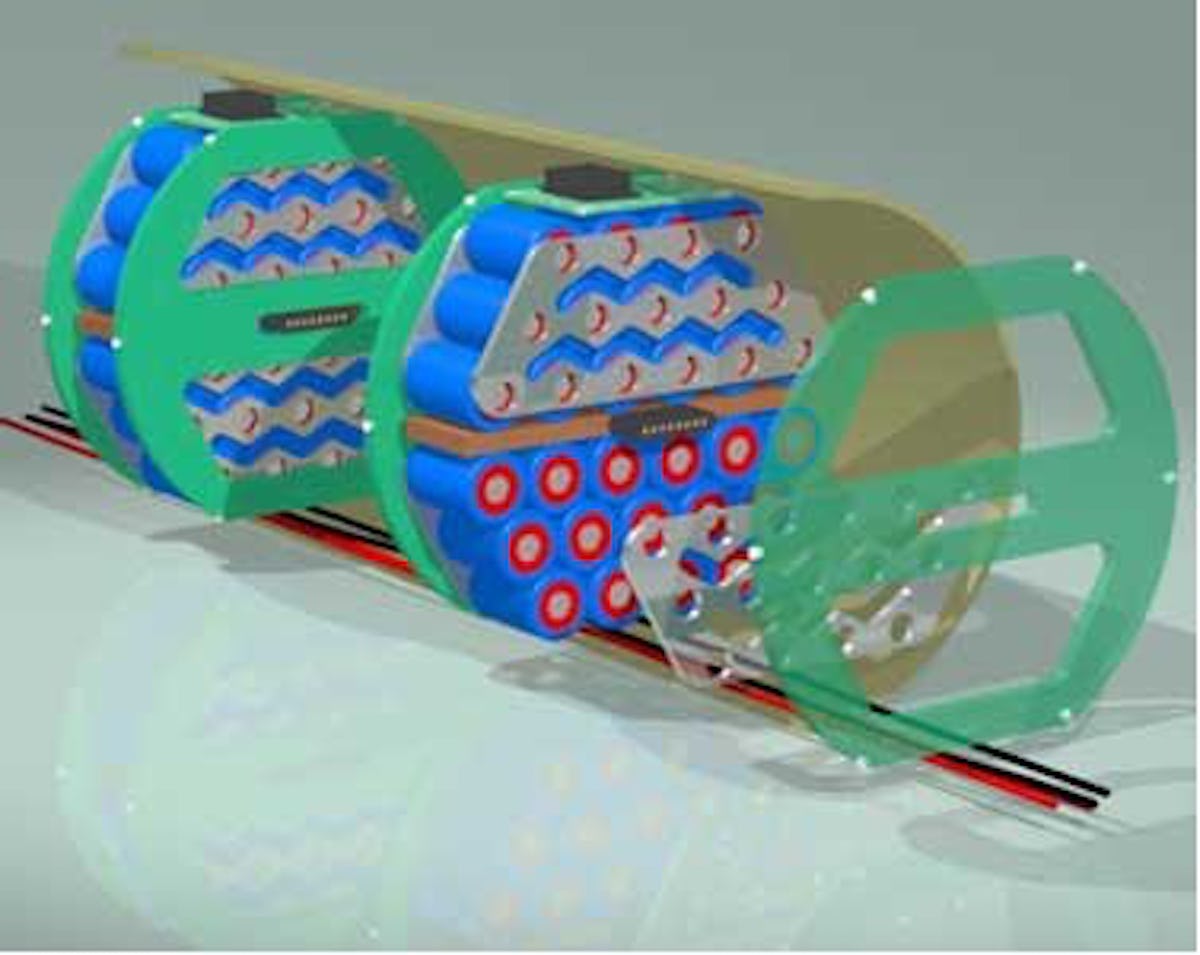 Nearby in Culham, FiFe Batteries Limited was founded in 2006 and is a developer of second generation Li-ion technology. FiFe Batteries operates a dedicated Li-ion R&D Centre at the Culham Science Centre in Oxfordshire, with extensive facilities including a 350m2 dry room complex equipped with a wide range of Li-ion cell fabrication and test equipment.
The Company also has significant capabilities in electrochemical testing, materials synthesis and characterisation. In addition to numerous test cell configurations, FiFe Batteries can also produce industry standard 18650 cylindrical cells and 383562 soft-pack cells in order to demonstrate new materials in recognised cell formats.
Safety and abuse testing can also be performed in a purpose-built test safety testing facility.
Axeon
Traction battery manufacturer Axeon was recently put in and out of administration by a hedge fund which now owns the whole company.
Axeon said it had doubled sales to £61m last year but made a £3m loss, and had shed 200 jobs, largely in Poland, from its 770 workforce.
Ironshield, through its vehicle AG Holdings, said it will transfer and protect the surviving jobs, 70 of them in Dundee.
Groupings
Fuel Cells UK, which coordinates the many fuel cell activities in the UK, was involved in the creation of the new Low Carbon Economic Area (LCEA) focusing on hydrogen energy, announced on the 12th February by Lord Hunt, Minister of State for Energy & Climate Change during a visit to Johnson Matthey Fuel Cells' global manufacturing facility in Lydiard Fields in Swindon.
The LCEA will cover South Wales and the South West of England initially, providing a hub for the UK's hydrogen activities, and will build on the region's expertise in hydrogen production.
A key aim will be to establish an internationally recognised centre of excellence and expertise in hydrogen technologies encompassing the full hydrogen energy value chain.
The Low Carbon Vehicle Partnership is an action and advisory group, established in 2003 to take a lead in accelerating the shift to low carbon vehicles and fuels in the UK and to help ensure that UK business can benefit from that shift.
It is a partnership of 170 organisations from the automotive and fuel industries, the environmental sector, government, academia, road user groups and other organisations with a stake in the low carbon vehicles and fuels agenda.
The UK Energy Technologies Institute (ETI) has launched a project to forecast and characterise the consumer market for plug-in electric vehicles.
As part of its £11million low carbon vehicle plan to support the roll-out of electric vehicles in the UK, the ETI will examine the cost drivers for new powertrain technologies and how these are likely to evolve over the next 40 years. There will also be a detailed segmentation of the market and an analysis of expected consumer behaviours when they are presented with this new transport option.
The research will be led by Ricardo and will also involve the Universities of Sussex and Aberdeen, along with TRL and Element Energy. They will aim to identify the key factors that will influence consumer behaviours while also producing detailed consumer models based on the findings.
According to Professor Neville Jackson, the Ricardo group chief innovation and technology officer, as well as the chairman of the UK Low Carbon Vehicle Partnership, plug-in hybrid and electric vehicles will have an important role to play in reducing overall carbon emissions but personal transportation is a complex system and a wide range of factors must be considered if an effective approach towards these new technologies is to be made.

Gravitron
Gravitron of Stroud in Gloucestershire describes itself as designers and manufacturers of electric vehicles, rides and drive systems for the leisure, service and automotive industries.
"A flexible and innovative company focused on customer requirements and satisfaction. From concept to prototype to preproduction to production, including 2D and 3D drawing works, 3D printing and rapid prototyping. Turnkey solutions to design, build and install. We have a core product range of the latest AC drive systems and electric vehicles available. Our after sales support and service is friendly and efficient with a speedy supply of spare parts. Maintenance contracts also available."
Towrite
Towrite Electric vehicles (Harborough) Ltd makes small electric tugs and people movers. The range includes 4, 6 and 4 Seater with Cargo Area, Platform trucks ranging from 1000 to 1500Kg payload with various body options, Tow Tugs and Pedestrian controlled Vehicles.
Towrite flat bed truck 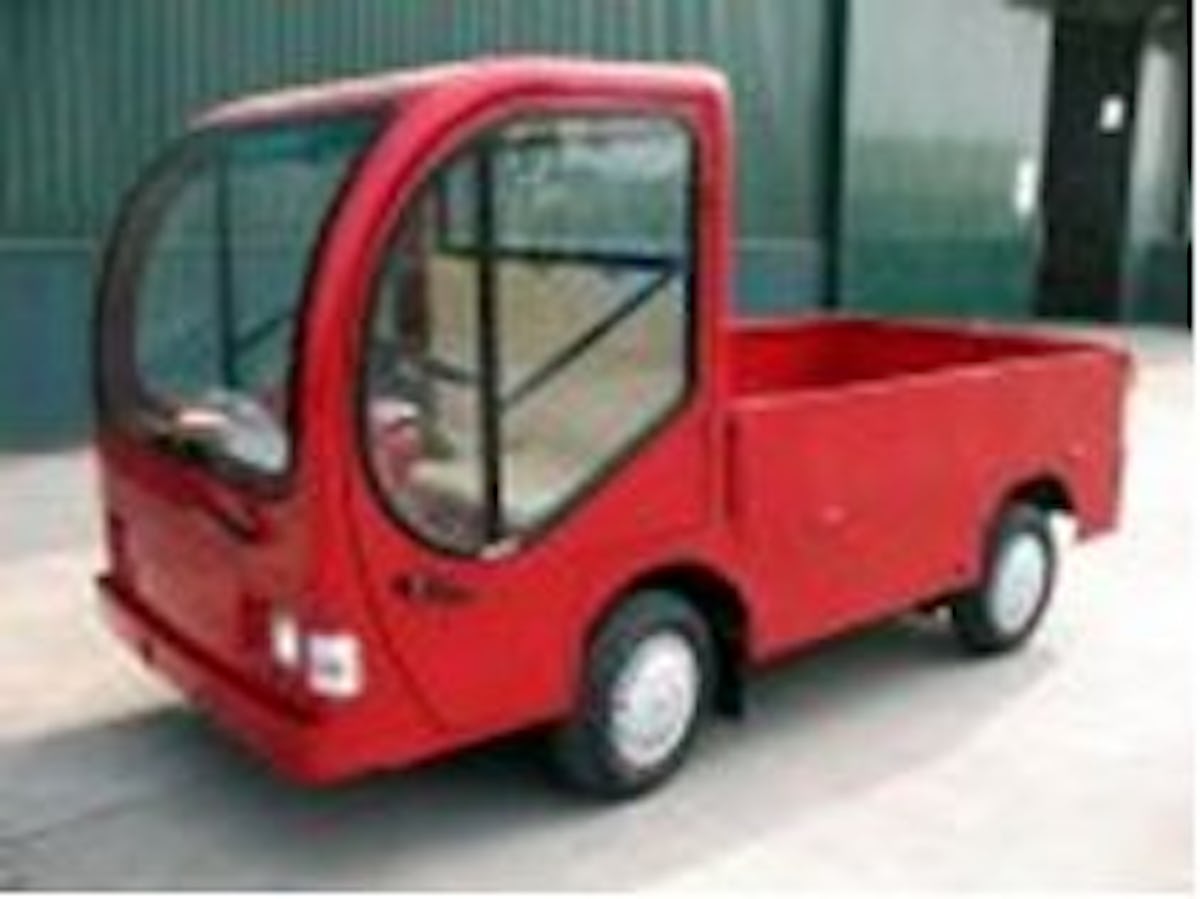 Source Towrite
AUV
Autonomous Underwater Vehicles are developed at the University of Plymouth, Heriott Watt University, Cambridge University and elsewhere in the UK.
Reliability was extremely important on the Autosub6000 when, in 2008, it carried out five missions to investigate potential threats to coastal communities along the Western European margin from giant landslides, earthquakes and tsunamis.
The Autosub6000 was developed by the Underwater Systems Laboratory at the National Oceanography Centre in Southampton, UK, including its pressure tolerant lithium batteries. It can do 180 km at three knots.
Autosub6000 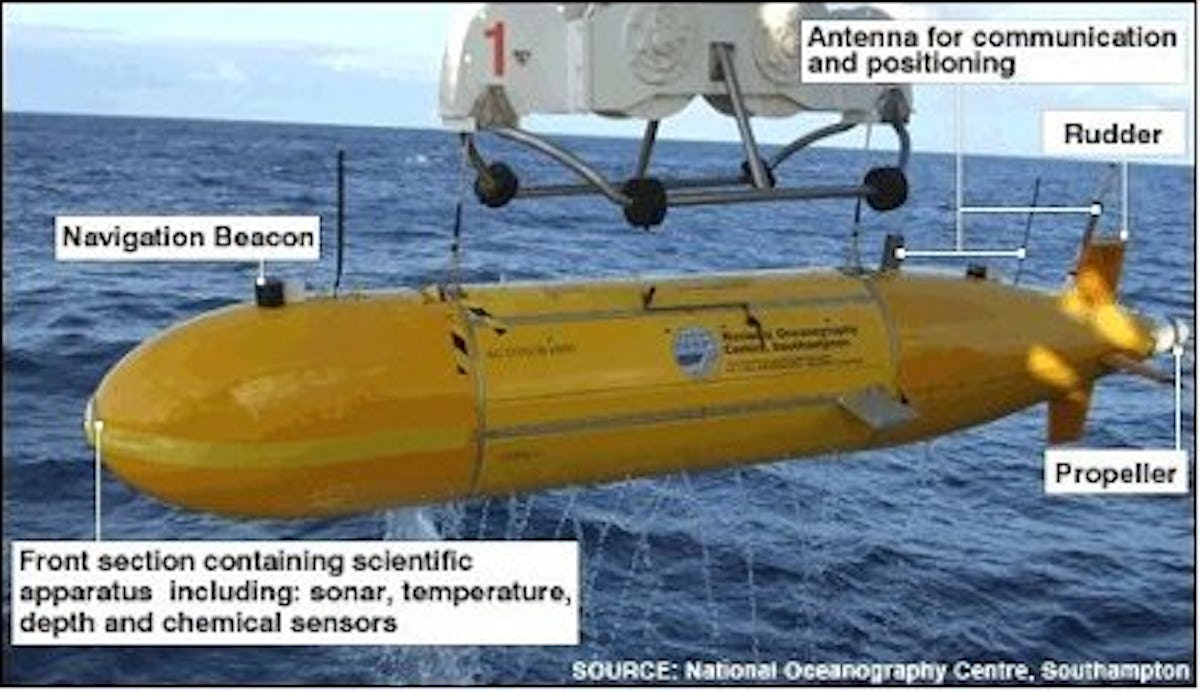 Source NOC
"When an AUV is sent 30km beneath an ice-shelf, there is no hope of recovery if anything goes wrong," explains Stephen McPhail, head of Platforms Development at the Underwater Systems Laboratory.
"We tend to operate our AUVs in a totally autonomous mode. Once launched from the ship and dived, the AUV is very much expected to carry out the survey without any further intervention from the operators."
Communicating with the AUV when underwater is achieved by sound waves. Acoustic modems have a range of up to 7km at best, so the AUV is out of range for most of its mission.
GPS does not work underwater, so the AUV 'dead reckons' by measuring its velocity relative to the seafloor, using Doppler velocity measurements and an Inertial Navigation system.
Also attend Future of Electric Vehicles a global event on the whole electric vehicle market, covering all forms of EVs.
and read Car Traction Batteries - the New Gold Rush 2010-2020 and Electric Vehicles 2010-2020