Energy harvesting and the smart grid

The term Smart Grid has been used for decades to mean anything from "a ring main for a country" to the far more responsive, interactive and intrusive electricity distribution systems of the future. These will become fractal in nature because they will seamlessly incorporate home networks, smart meters, electricity generation on your house and maybe even personal generation and use of electricity as reported in Energy Harvesting Journal. 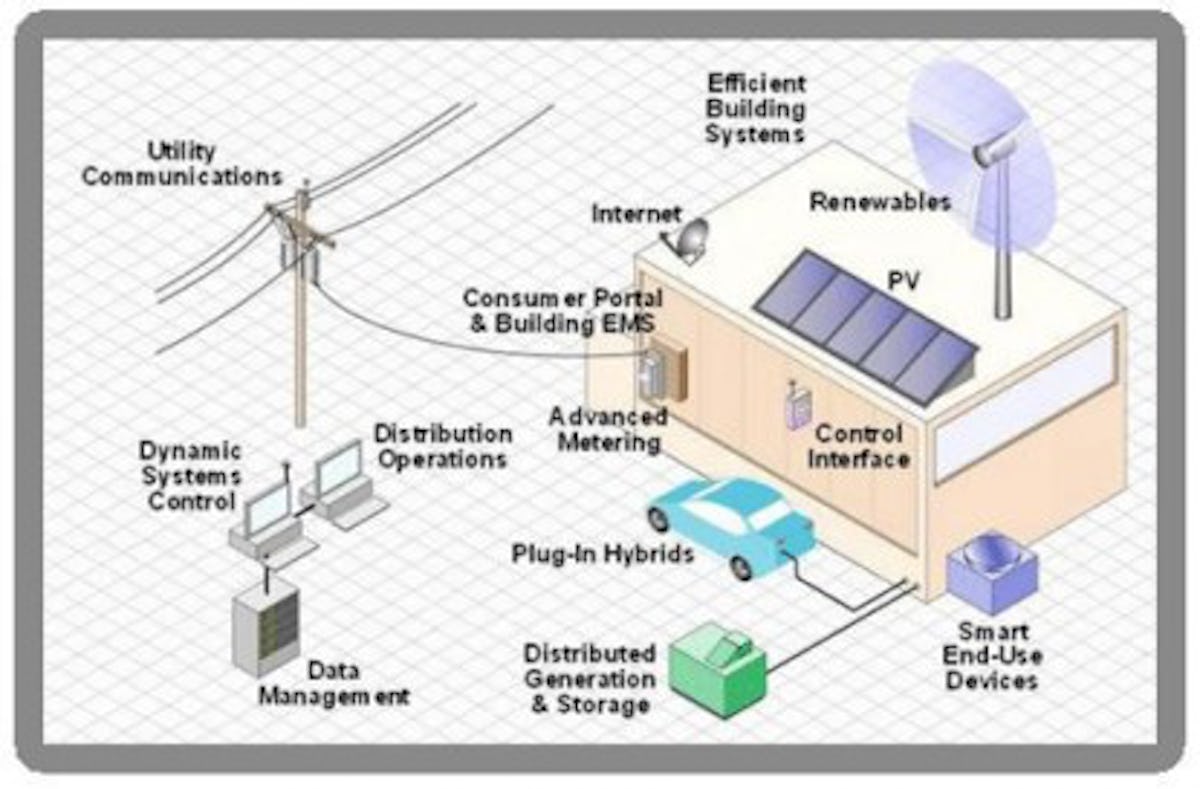 As popularly understood today, a smart grid will deliver electricity from suppliers to consumers using two-way digital technology to control appliances at consumers' homes to save energy, reduce cost and increase reliability and transparency. It overlays the evolving electricity distribution grid with an information and net metering system in order to provide a completely new level of responsiveness and efficiency even in the face of terrorist attacks, major natural disasters and sudden addition or removal of inputs, from very large to very small. Indeed, there is some mimicking of the internet here because wireless sensor networks and smart meters will self organise and self heal their data transfer mechanism and eventually the infrastructure will do the same. National boundaries will break down. The European grid already with plans to extend into North Africa - to grab all that sunshine hitting solar cells.
A significant proportion of the Obama billions is dedicated to replacing the ageing US electricity distribution system with a smart grid in order to improve energy independence and address global warming, local pollution and emergency resilience issues. The computer industry loves the idea because the IT challenges are formidable. The electricity industry sees big business in the various dreams of dc instead of ac distribution - renewable energy is often dc. Superconductive transmission lines are a possibility. Big brother could switch on and off your washing machine or steal electricity from your electric car when it best suits the needs of the greater community. You will have pre-authorised this of course, but you will not know when or to what extent it will happen.
For the next ten years, the main limitation of electric vehicles will be their inadequate storage of electricity. Progress with energy harvesting on and in electric vehicles by using harvesting shock absorbers, photovoltaics, automotive thermoelectric generators ATEGs, regenerative braking and the like will not change that significantly.
Surely a super grid taking electricity from a pure electric vehicle will make it even less useful as a means of transport? Remotely blocking the ability to charge it at certain times, not known in advance, will replace range anxiety with "will it work at all" anxiety. True, if big brother steals some electricity from the battery in your hybrid car you can still go out but surely that increases the use of fossil fuels. Does big brother know or care about that? Perhaps using electric vehicles as a source of grid power at any time in the next ten years is equivalent to biofuels consisting of the burning of food and destroying of rain forest while increasing global warming. Hold on a minute: that one is actually happening. It's the first step in an eventually virtuous journey. (They are saying that about the use of coal based electricity to rotate the wind turbines in Wales recently to prevent their shafts distorting - no wind, you see). Maybe we'll have the two steps back and one step forward with EVs - maybe not. After all, no country is likely to impact more than one percent of electricity with electric vehicles in the next ten years - there simply will not be enough EVs on the road.
Before further bizarre decisions are made it will be timely to hear the debate, so it is good to hear of a conference on the subject. Indeed, although traction batteries will be lasting the life of the car - 10-12 years - before many years are past, there is the possibility of them finding further life in the super grid. In 15 years or so, the load on national grids from charging what may be 15% of all cars, because they are electric, will be an issue. Indeed, widespread deployment of fast charging facilities could be an issue well before then. Progress with most of these technologies will benefit the smaller scale technologies of energy harvesting.
"Electric Vehicle Integration Into the Smart Grid of the Future - G2V & V2G" September 28, 2010 will be hosted by UCLA-WINMEC , and UCLA Smart Grid Energy Research Center. They say that:
Recent advances in information and communications systems and battery technologies, in combination with substantial importance given by society to reducing greenhouse gas/carbon emissions, have resulted in dramatic thrusts towards accelerated innovations in electric vehicles (EVs) and the smart and renewable energy infrastructure necessary to fuel and support them. Products such as the Nissan Leaf, Chevy Volt, and Ford Focus Electric, are in the process of creating mass markets for electric vehicles in the U.S. The utilities on their part are working towards enhancing their infrastructure through their own investments as well as those from the DOE Stimulus ARRA Grants, and this requires massive changes in their distribution as well as their transmission systems. If 25% of all vehicles were EVs, the current infrastructure in the U.S. would not be able to support charging these EVs today - substantial technological, infrastructure and behavioral changes would be required. Some utilities have reported numbers which indicate that even a single 220V EV charger may, during peak consumption hours, overload its transformer. Therefore, the current infrastructure needs to be upgraded both from a capacity standpoint as well as from a flexibility and power routing/control standpoint. Adding capacity is far more expensive than adding intelligence and smart power routing capability, and the eventual solution will require an innovation combination of both. Certainly, adding auxiliary power sources at the edge of the power network such as residential solar PVCs to feed into the grid would help from a capacity standpoint, but using such alternative fuels so as the move the energy around where it is needed from where it is produced will require a very sophisticated and smart grid. 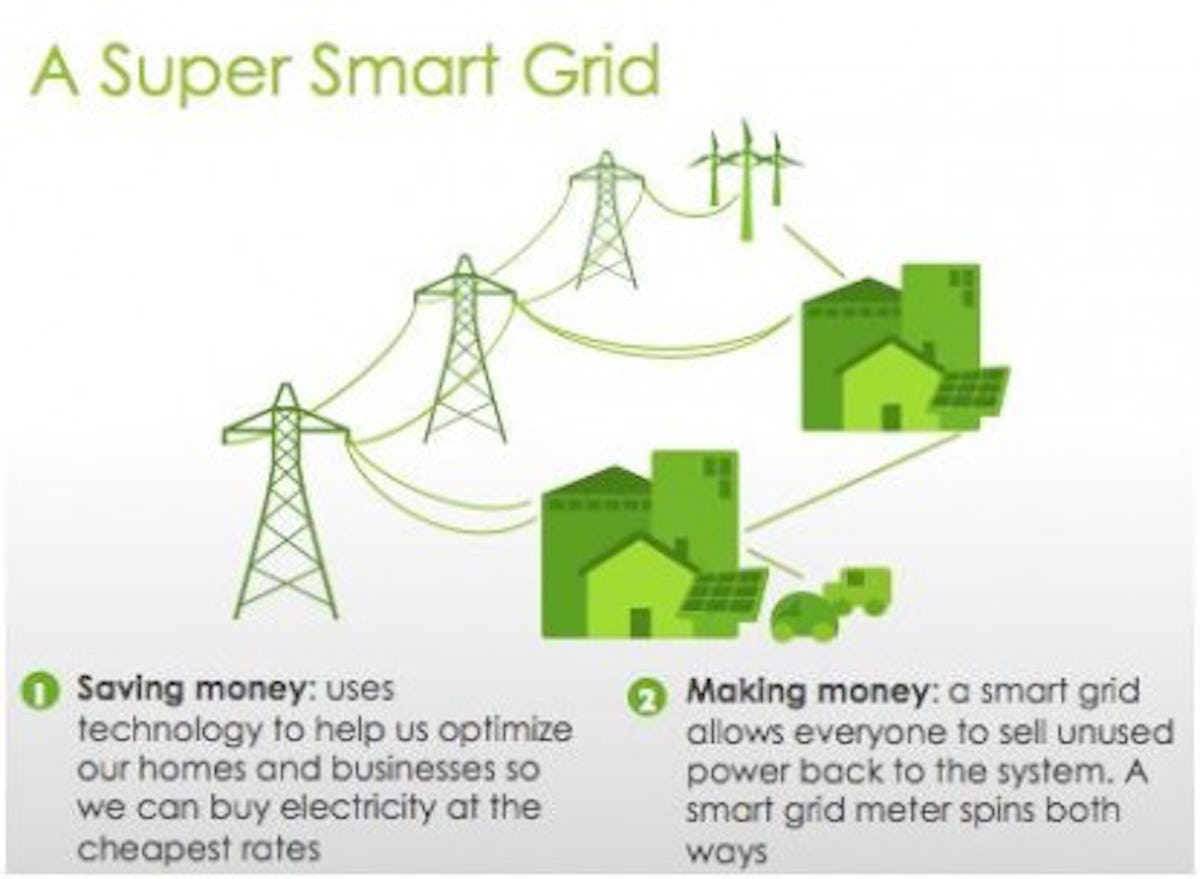 While adding capacity and adding smartness are challenges - there are also opportunities. There are other unique opportunities that the growth of EVs can provide in the context of the Smart Grid. Due to the addition of a large number of batteries by way of these EVs there is the potential to aggregate them to create an energy storage buffer which can absorb excessive power during low-load periods such as during the night, and become a source of electrical power during high-load periods such as a hot summer's afternoon. This ability can help substantially with Demand Response which is a key and yet challenging problem for the utilities. This source of energy can also provide buffer power for smoothing out frequency fluctuations resulting from mismatched demand (generation versus consumption) - and therefore could be used for Demand Dispatch by the utilities. All of these needs and capabilities will require the integration of sophisticated technologies including communications, wireless, sense-and-control, Internet, mobile computing, cloud computing, Lithium Ion and other battery technology, superconductors, etc.
This forum will bring together researchers, utilities (distribution and transmission), technology providers, service providers, EV and automotive companies, renewable generation companies, and government together to create Thought Leadership around the field of electric vehicles and their integration into the Smart Grid of the Future.
Topics include but are not limited to:
Sponsors are WINMEC and Henry Samueli School of Engineering and Applied Science
Top image source Felixng.org
For more read : Energy Harvesting and Storage for Electronic Devices 2010-2020
and attend Energy Harvesting & Storage and Wireless Networks & RTLS USA 2010