gives a unique insight into the major changes now occurring in the RFID market. For example, since the same time last year, the number of case studies involving active RFID (tag with a battery) has risen modestly from 11% to 14% of the whole but this disguises the fact that the best selling type - car clickers for central locking of vehicles - shows lacklustre growth and the other active RFID applications show strong growth. Last year's 121 applications of active tags have now risen to 210 and the rate of increase is now very strong.
All types of active tag are covered, from semi-passive ones which cannot initiate a signal but often manage sensors to semi active and fully active types which can. Expect to see many more semi passive types in the marketplace in future even though they are far from being the most popular today.
The main locations of active tags are shown below.
Main present and future locations of active RFID tags 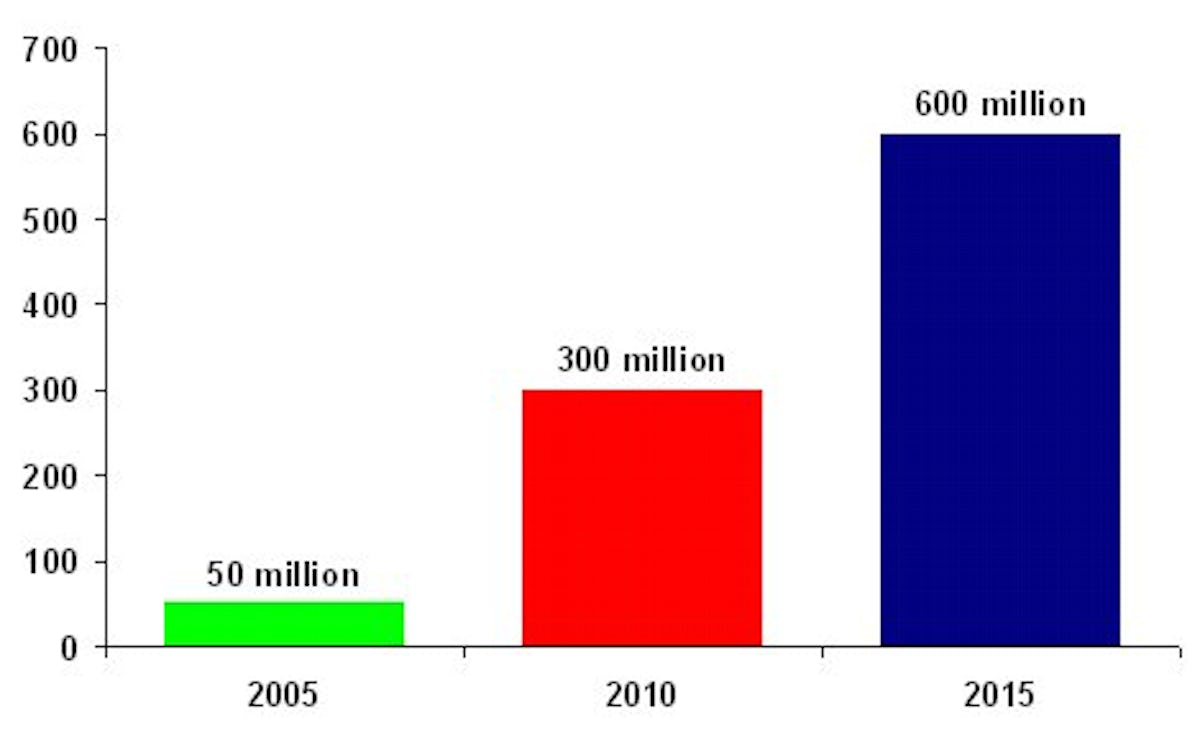 Source: Industry statistics
This growth will be driven by the conveniences offered by RFID enhanced phones. A phone with RFID capability could be used to access a public transport system, price an EPC coded product, pay a roadway toll booth, purchase coffee, and many other transactions. As consumers become accustomed to using these systems we may see payments of value approaching credit card or checks. The hardware and software associated with cell phones can provide a greater level of security than, for example, a low-cost passive tag allowing for this level of transaction assurance.
IDTechEx gives below a conservative forecast of value sales of all forms of active RFID tag and system. However, in 2005, the Active Tagging Group of LG in Korea announced a target of selling one billion active RFID tags in the next five years and if these and/or other new initiatives are successful, the true market figures will be much higher. Detail is available in Active RFID and its Big Future.
Conservative forecast for the value of global sales of active RFID systems and tags, 2005 to 2015 in millions of dollars excluding RFID enabled cellphones and Ubiquitous Sensor Networks 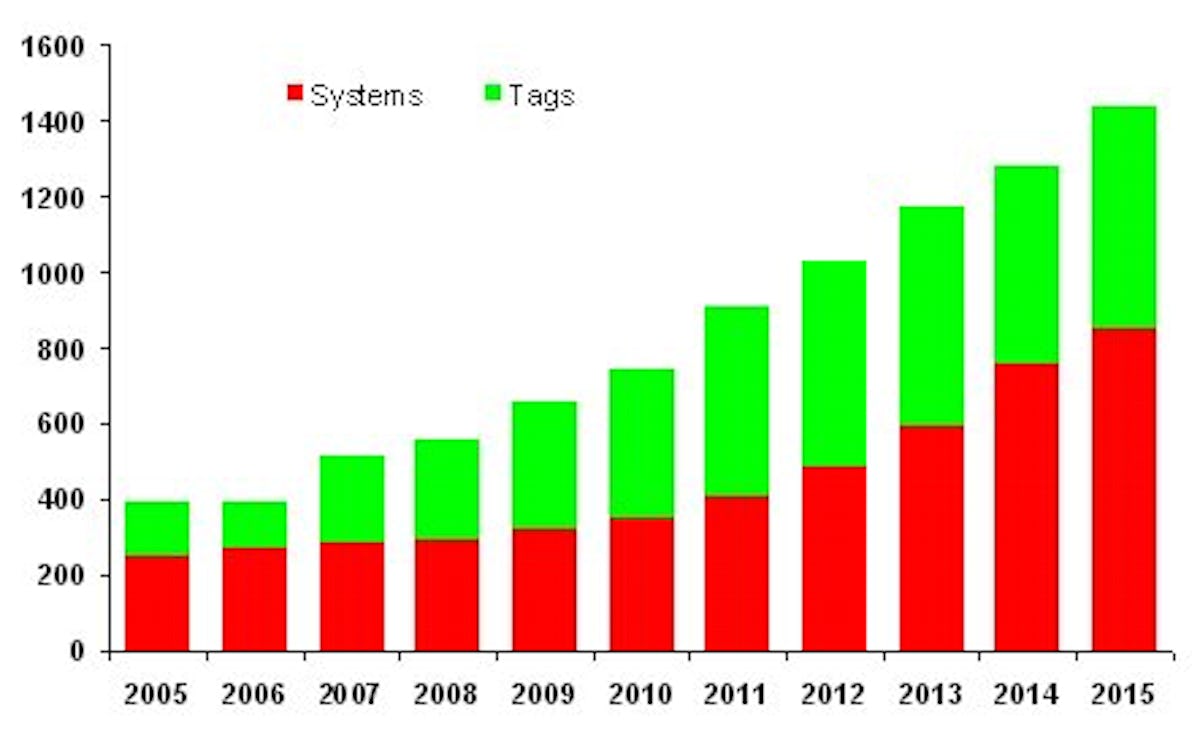 Source: IDTechEx
Future growth will be driven by the open standards now available for EPC Type 3 and Type 4 tags to Gen 2 (ISO 18000) and more sophisticated specifications for the air interface. They will also be driven by the sale of Smart Active Labels SALs. No longer will it be a matter of proprietary solutions often with no second sources. A long list of companies such as Maxim Dallas Semiconductor, Telegesis, LG, Samsung, Dai Nippon Printing, Ubisense and Connexion2 have recently moved into active RFID or announced their intention to enter the field.
Another driving force is the arrival of many active RFID tags that incorporate another radio frequency or microwave device. Examples are RFID with GPS or GSM for locating people or things. Indeed, there are new active RFID tags that completely dispense with their own transmission and piggy back on a pre-existing Bluetooth, WiFi or other systems or at least use two way, short range radio communication standards.
Radianse uses active RFID with Bluetooth to locate nurses in hospitals. Connexion2 uses GSM to record an incident if a social worker is threatened or attacked. They simply touch a secret button behind their badge and the conversation is radioed to the recorder at the police station and it gives ID and alarms to the police at the same time. Arrests have already been made with this new device. Telegesis combines active RFID and ZigBee.
The US continues to have by far the largest number of cases of RFID in action overall and the largest spend on RFID. However, this is not true of active tags, where the current split of case studies is given below showing Europe in the lead in diversity. Relative expenditures between territories may be another matter, however. For example, the US Military continues to invest heavily in active RFID systems and, for the future, Japan and Korea are setting the pace with grand new concepts such as Ubiquitous Sensor Networks.
Global distribution of case studies of active RFID in the IDTechEx RFID Knowledgebase, the world's largest collection of cases of RFID in action 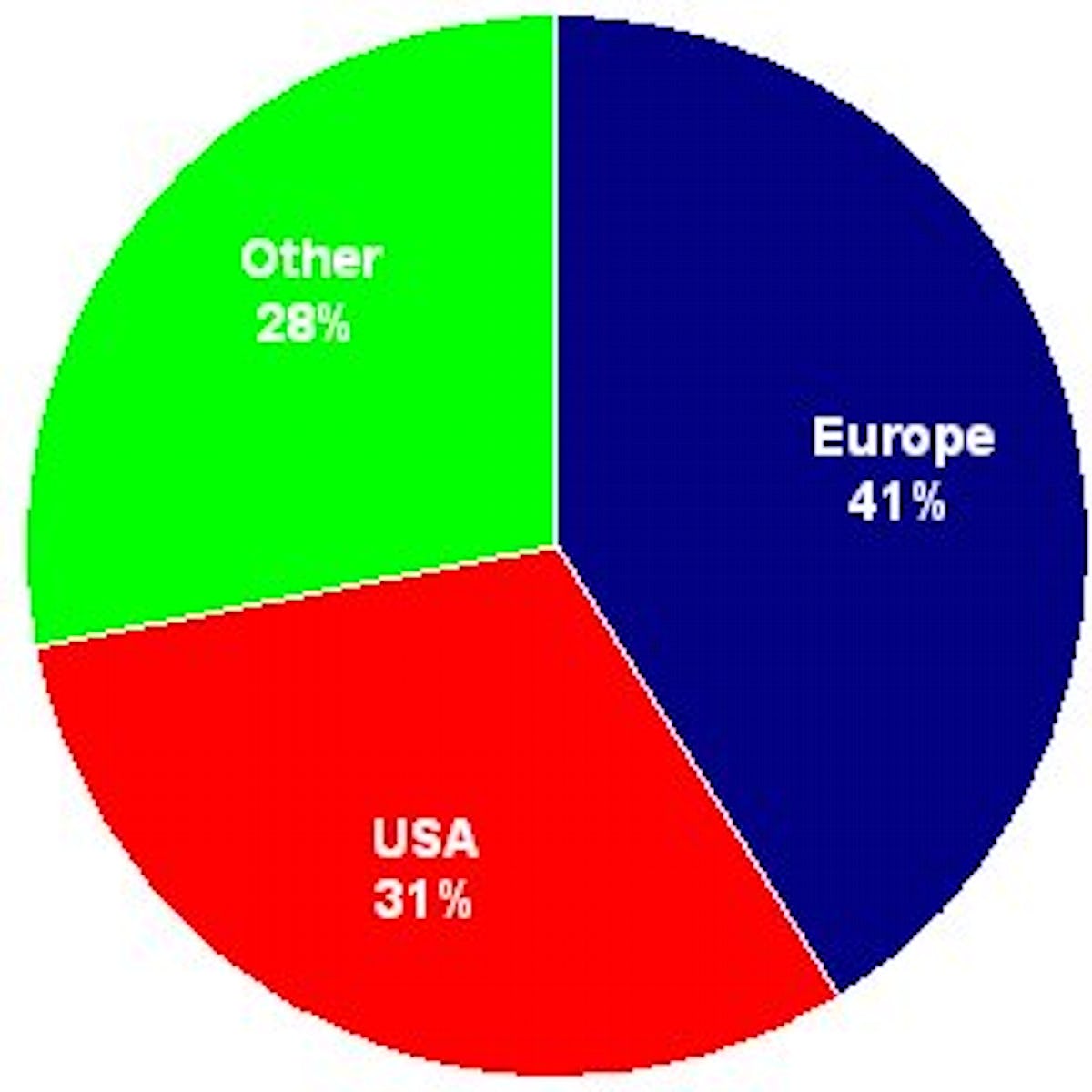 Source: IDTechEx
In the Other category, China and Japan are important but Vietnam, Thailand, Botswana, Namibia and South Africa are among the many other countries now using active RFID. In Europe, the Netherlands is disproportionately busy with active tags, one million having been fitted to bicycles to permit them to be put in and taken out of unstaffed lockups at any hour and identified if stolen.
IDTechEx considers active RFID to be so important now and in the future that the company is staging the world's first major conference and exhibition solely devoted to active RFID. The US Department of Defense, Intel, Motorola and Siemens are among the many major organisations that will provide speakers. Now that is an idea whose time has come!
As a unique offer, register for the Active RFID Summit by October 28th and receive the IDTechEx market research report Active RFID and its Big Future FREE, worth $1000!
The Active RFID Summit will take place in San Antonio Texas November 15-16. See www.activeRFIDsummit.com