Worldwide, boat builders are gearing towards conquering the seas with solar powered vessels. The People's Projects Foundation is aiming for the first solar circumnavigation using a unique solar boat with no sails or wind generators or fuels of any kind on board, not even for cooking. The project is led by Anthony Howarth, a Cambridge graduate engineer and a communicator who since the 1980s has been investigating the practical use of solar power for transport. He brings media and sailing experience as well as solar drive system engineering expertise to the project. The solar circumnavigation is expected to take place in 2011.
On a large scale, PlanetSolar is a multihull vessel topped by a large array of photovoltaic solar panels, constructed by Knierim Yacht Club, in Kiel, Germany. Built in 14 months, the biggest solar boat ever built has impressive dimensions and is yet both silent and clean. The boat is 31 metres long and is expected to produce up to 103.4KW of solar power, the engine needs 20KW to achieve its top speed of around 8 knots. The goal of PlanetSolar is to navigate around the world at an average speed of 7.5 knots. The multihull will be home to four sailors during the round-the-world attempt expected to take place in 2011, and can accommodate up to forty people during the promotional trips planned at each port of call. SunPower has provided the 38 000 photovoltaic cells that cover the vessel. 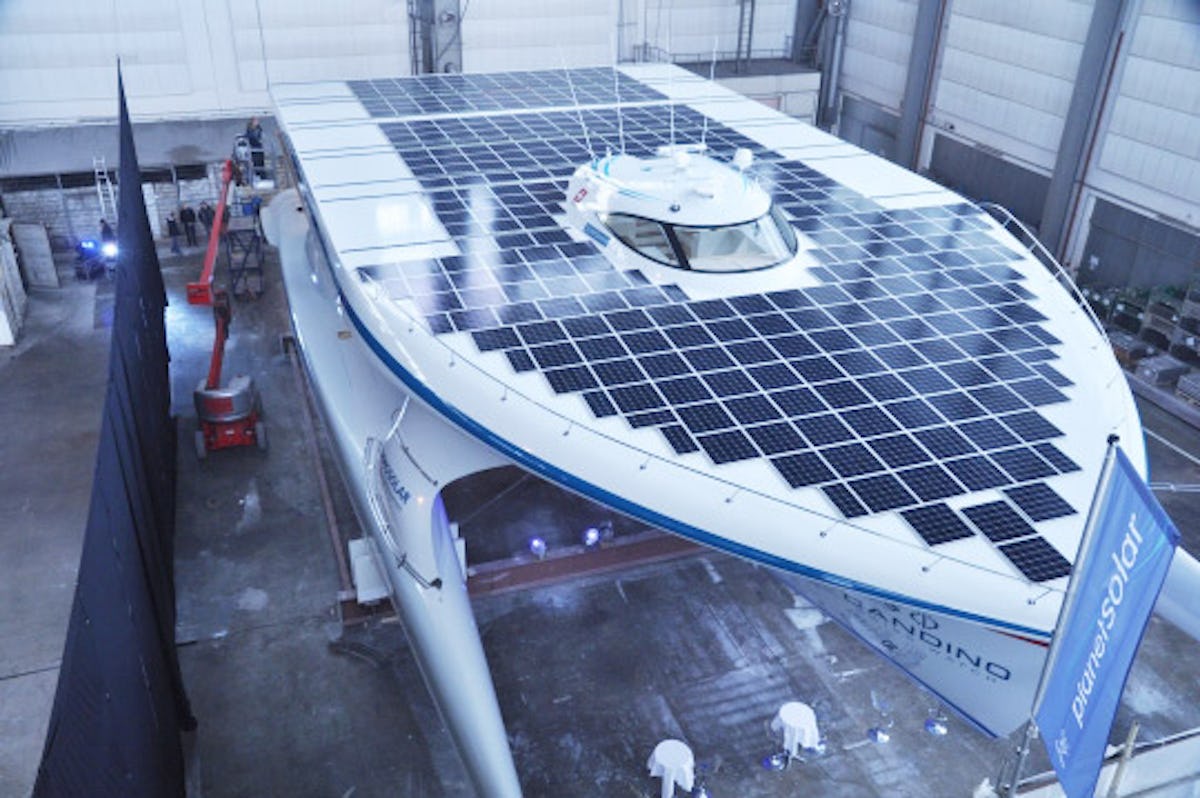 Source: Mobile Mag
On a small scale Aequus 7.o is a 7 metre family boat, which sails silently at a maximum speed of 7 knots. The engine draws its energy from the solar panels embedded in the retractable canopy, which also charges onboard lithium batteries if necessary.
Second generation lithium batteries that are safer and have better performance are also incorporated in the Lightning Car Company's Lightning sports car, the KleenSpeed Technologies 200mph Formula One car, the Hawkes Ocean Technologies Deepflight submarines, the PC-Aero pure electric aircraft etc. but even more powerful batteries will be welcome.
When the engine is not in use, the solar panels recharge the batteries to provide cruising for up to 8 hours without solar input (depending upon the choice of batteries). This is amply sufficient for a relaxing day on the sea. 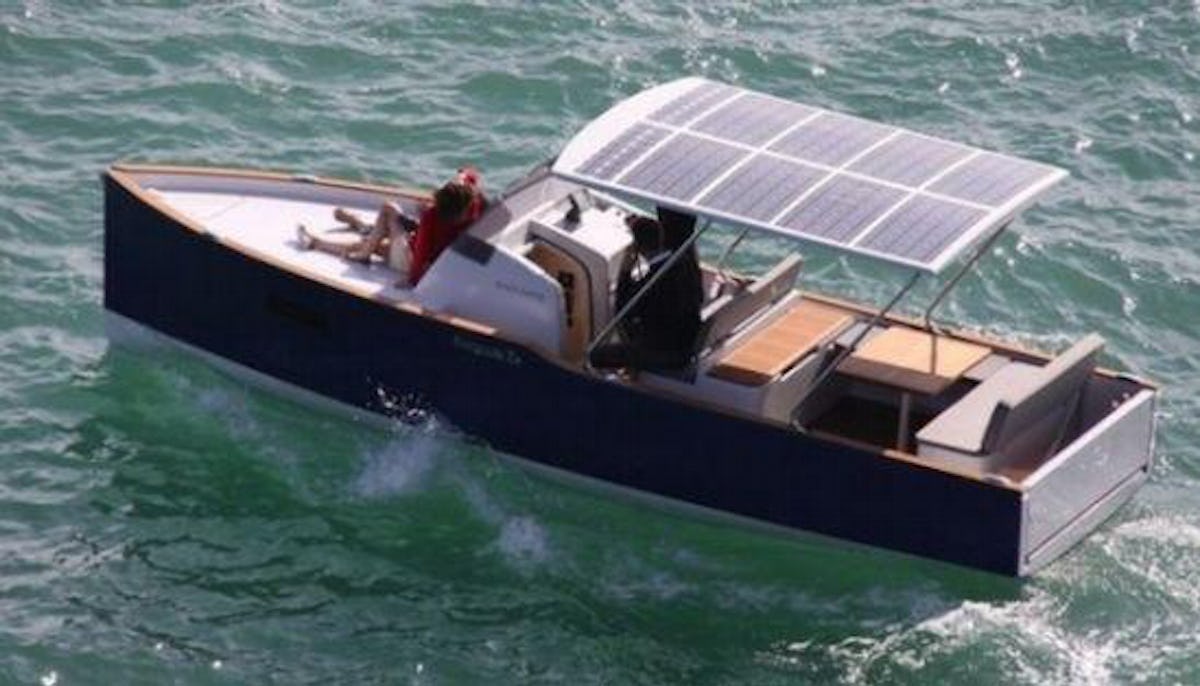 Source Aequus Boats
In North America, the Tamarack Lake Electric Boat Company has launched the Osprey, a solar boat about 32 feet long that can carry up to 25 people. The boat gets 100% of its propulsive and auxiliary energy directly from the sun through the solar panels mounted on its roof. This power is stored in batteries which in turn feed two electric engines, making the boat very manoeuvrable as well. The Lake St. George Conservation Field Centre near Richmond Hill, Ontario, find the Osprey is the perfect solution to allow area schoolchildren to enjoy and study the lake without disturbing the wildlife any more than was absolutely necessary, and without damaging the environment. 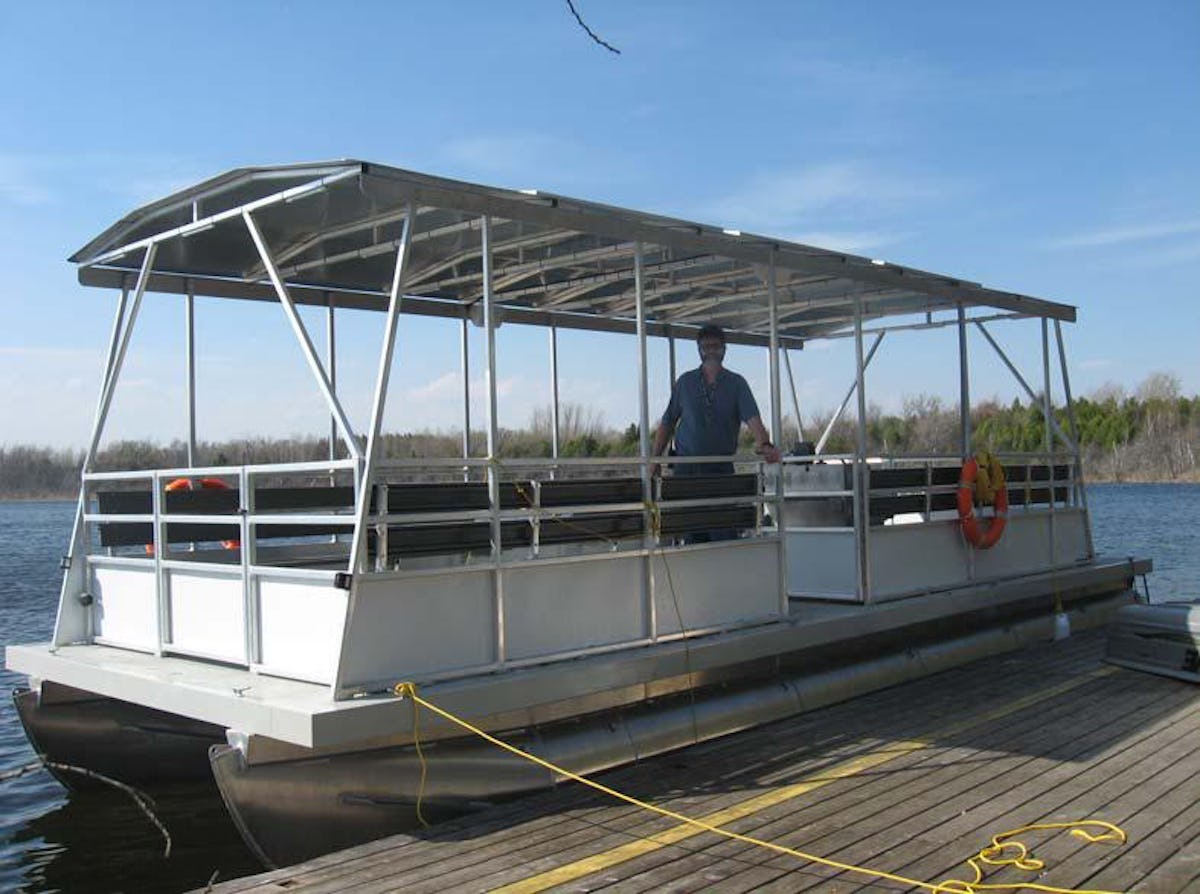 Source: Tamarack Lake Electric Boat Company
In Turkey, a fleet of solar powered boats sail on Köyceğiz Lake and the Dalyan canals. The boats do not create waves or ripples and therefore protect the shore and plants from erosion. Creator Özay Akdoğan says the boats can sail for eight hours using batteries which store the solar power. The perfect environmentally friendly solution.
Solar powered boats are becoming more popular with everyday boating people travelling short distances, but solar power is also used in boat racing. The Frisian Solar Challenge is one of the largest boating competitions in the Netherlands where the judges will look at the design and construction of the solar boats, right up to the actual race. The design of these solar crafts need to be ultra lightweight and very fast but also extremely strong to withstand the elements. The international Frisian Challenge is set over five stages, and the boats will race a total of 220 km passing 11 cities and the 2010 race is currently underway.
The Private Energy Solarboatteam is the fastest solar boat at the first stage of the Frisian Solar Challenge covering 44 kilometers in 2 hours 15 minutes and 45 seconds; boats that do not reach the minimum speed of 12 kilometers an hour are excluded from the race. 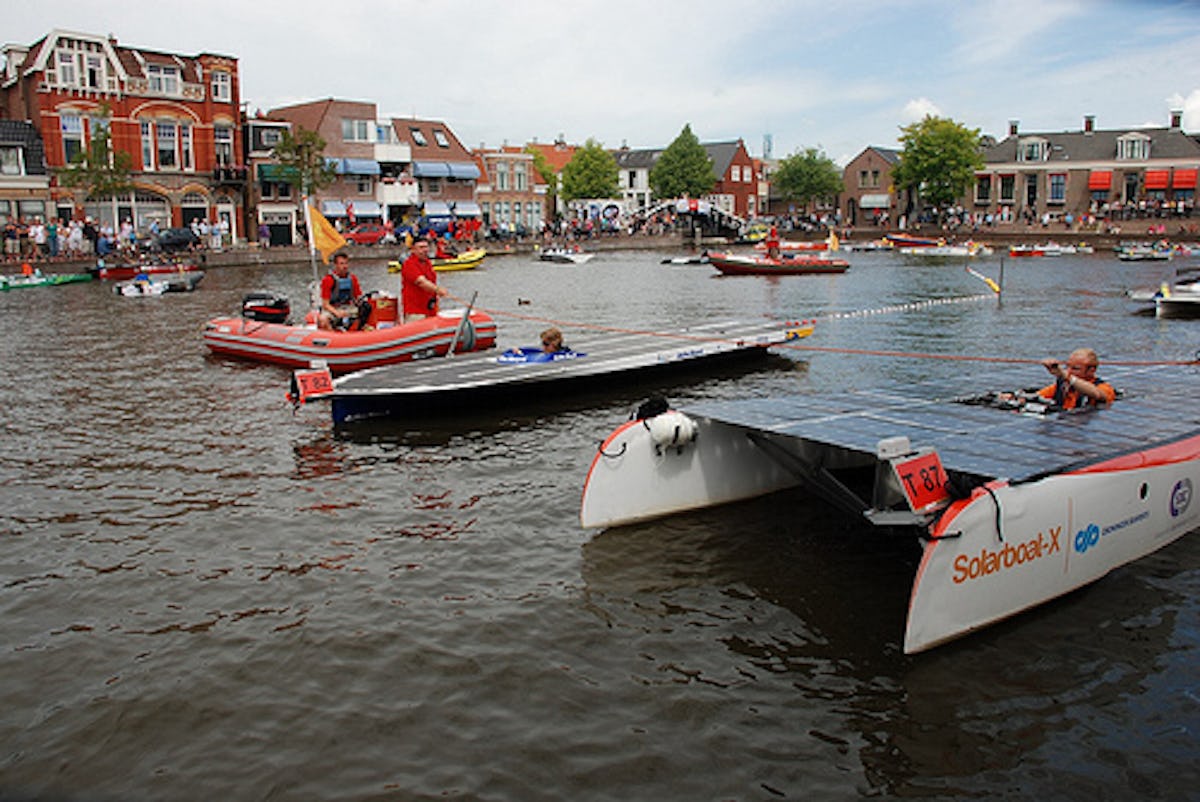 Source: Dong Energy Frisian Solar Challenge
Solar energy is becoming a well used renewable source of energy, many homes and businesses all over the world have it installed and boats are increasingly using this source of green energy.
Top image source PlanetSolar
For more read : Energy Harvesting and Storage for Electronic Devices 2010-2020
and attend Energy Harvesting & Storage and Wireless Networks & RTLS USA 2010

There is already a new generation of solar boats in daily use, e.g. from SolarWaterWorld AG in Germany (solarwaterworld.de/en/). They build solar boats, ships and yachts for private use, rent and charter.